On Maltby's work it is the later career sculptural pieces that have gained more interest in the past few years. They have started to cross that border between Potter and artist and you hear Maltby described as a 'sculptor' more and more lately. They are quirky and unusual, and indeed are very popular. They sell really well on Ebay all the time.
Therein lies Maltby's unique quality. He has long been praised and lauded as a superb potter, but he is also a very good sculptor. Moreover he has always been very popular and populist in both fields. That is a very great achievement.

Nigel Dutt, who wrote the obituary, is a long time collector of John's work and bought a few pieces from me over the years.
_________________
Now you should know by now that Potty and I need to see your bottom - we're funny that way!

The obituary was edited from a longer one.

I thought it appeared to have been edited.

The bit about his father reminded me of a John telling me about when he was a schoolboy he had to join his father at the Fish Market during the school holidays. His father was a wholesale fish trader and he wanted John to join the "family business", which didn't appeal. Therefore John spend his time messing up the mental arithmetic on purpose, in the days before calculators, so that his father would decide that his son's future was elsewhere. 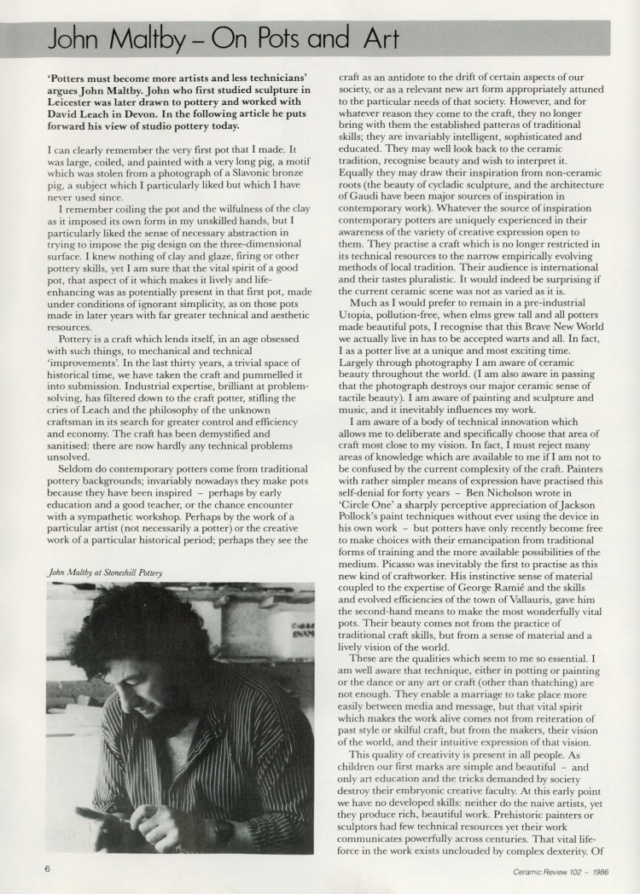 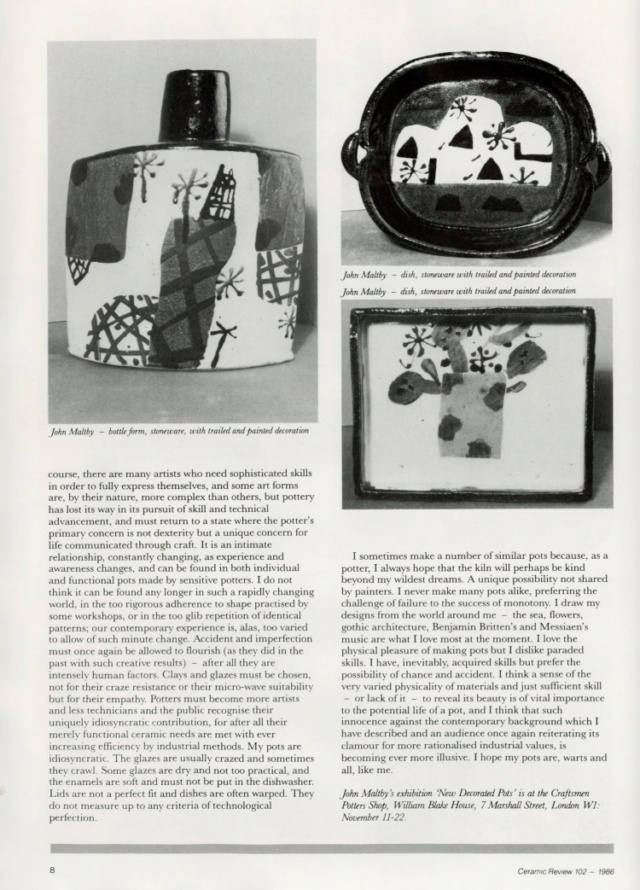 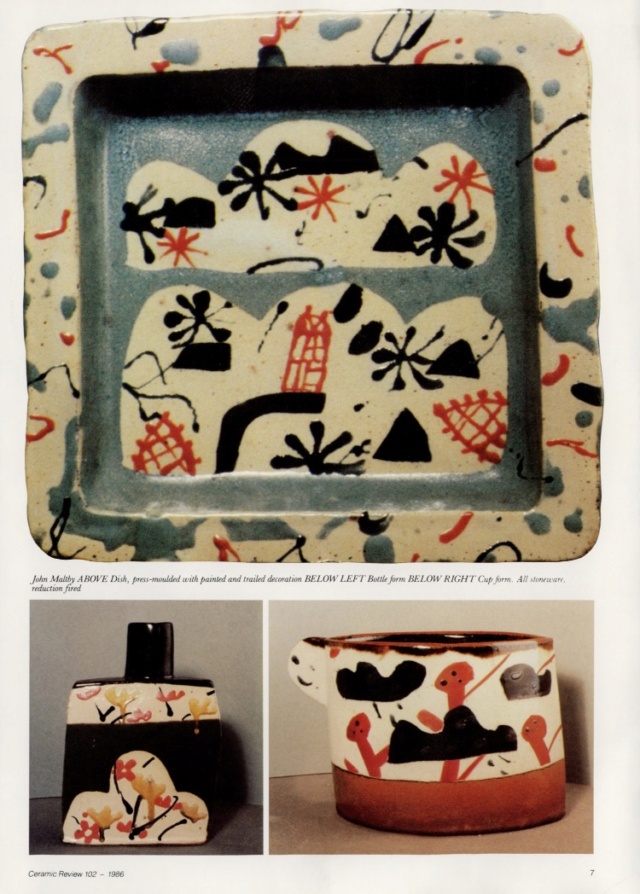 I bought the magazine and this is just one article out of it so I dont see why not.

I know Nik had a thing about it but he didn't understand copyright rules and it seemed like there used to be a couple of members with websites of pottery and glass who were fed up with people posting their stuff so there was a blanket ban on posting screenshots.
_________________
Carrot cake is just fake cake 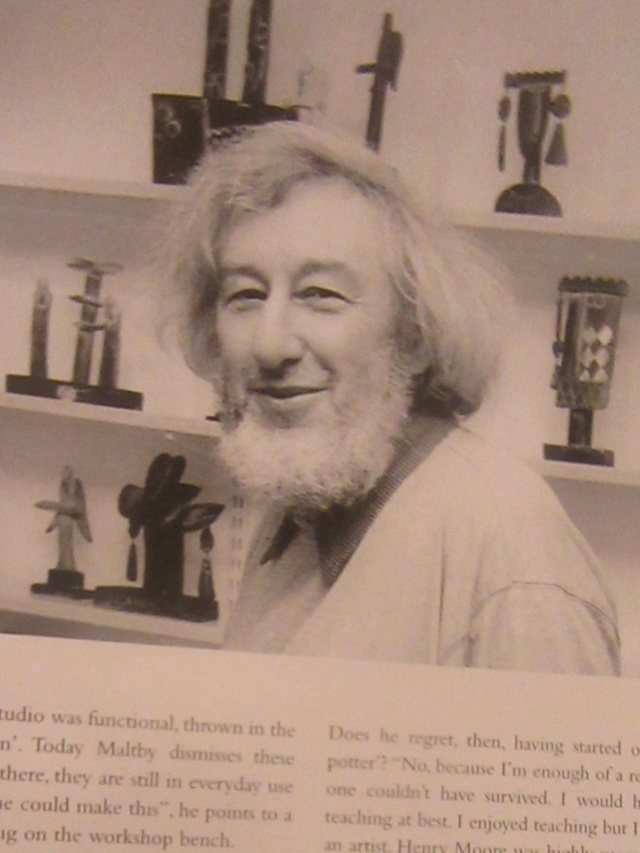 This is the full text of Nigel Dutt's John Maltby obituary which was somewhat edited in the Guardian. He posted it on Facebook.

The ceramic artist John Maltby died in Devon on December 22nd, 2020, aged 84.
John was born in Cleethorpes, Lincolnshire. His father was in the fish merchant business, but although John developed a love of the sea, and indeed sailed for many years, his mother supported him in resisting his father’s pressure to follow in the business.
After local grammar school he took a degree course in art at Leicester College of Art, specialising in sculpture, and then spent a year at Goldsmiths covering a broad range of arts. For a couple of years, he was an art teacher at Caterham school, and it was there that he met and then married, Heather, who was the matron, in 1961. By chance he read Bernard Leach’s A Potter Book and when the couple toured the South West for their summer holiday in 1962, he visited Leach in St Ives. Bernard in turn directed him to his son David, who had set up his own pottery at Bovey Tracey in Devon a few years earlier. The Maltbys then visited David, and John made the critical decision to give up teaching and join David as his apprentice. He spent two years there, working in the pottery and living in property rented from David. There he learned the fundamentals of pottery techniques and the making of Leach style functional wares; after this, he said “I could throw like an angel”.
In 1964 he took the significant step of founding Stoneshill Pottery near Crediton in Devon and was still making work there until a few days before his death. Apart from the occasional apprentice very early on, it was a one-man operation. He started by making functional Leach-style pots, but quickly realised that making Anglo-Japanese wares was neither personally relevant nor fulfilling and he started producing individual work, feeling that following Bernard Leach’s philosophy of individuality in art was more important than simply being a copyist. For John, this meant exploring the very English aspects of the landscape, sea, architecture, and music in the form and decoration of his work. His own artistic influences were also incorporated: Mozart, Britten, Picasso, Klee, Nicholson, Moore and Alfred Wallis amongst others. He did not restrict himself to ceramic work and was famous for his, often humorous, painted wooden ‘automata’.
By the eighties John had achieved the status, which he retained for the rest of his life, of being one of the best known and most admired and respected British ceramic artists. In spite of this he always had a completely unrealistic fear of failure and Heather eventually stopped him going to private views because of the physical and mental stress they caused him. Nevertheless, it was an unusual Maltby show that didn’t sell out on opening day. He was advised by some gallery owners to severely limit his output and equally dramatically raise his prices. However, this was not John’s way; firstly, he always loved making and secondly, he wanted his work to be affordable rather than exclusive.
In 1996 he had a major heart operation, and this led to a dramatic change in his work because he lost the strength to perform the heavy work of kneading clay and manipulating large pieces. Instead he blended his earlier sculpture training with his ceramic skills and started to make small, and sometimes not so small, sculptural work. Many of his earlier themes were still there, but at the same time he introduced a new cast of characters including birds, kings, queens, warriors and angels. This was the style that he worked with for the rest of his life.
On the evening of the day Heather died in 2007 an owl perched near John in the garden and just stared at him. So, it joined his cast, as well as the ‘gardening angel’ that was Heather finally freed from the serious mobility problems that had affected her since childhood.
When John gave his stimulating and entertaining lectures, ‘vitality’ was probably his most used word and his humour always shone. He described how his approach was pragmatic; if the right technology and new materials were available then he would use them. He was certainly prepared to be outspoken and was not afraid to be iconoclastic about the art and craft worlds that he inhabited.
His memory and work will certainly live on.
<<<<<>>>>>

Dutt missed out the bit that Maltby was so poor at times, he couldn’t afford to buy clay or fire his kiln so made the automata from anything he could scrounge
_________________
Carrot cake is just fake cake

I heard that at his funeral, during the eulogy, the service was referred to as "his last firing". Something that must have originated from John himself.
_________________
Now you should know by now that Potty and I need to see your bottom - we're funny that way! 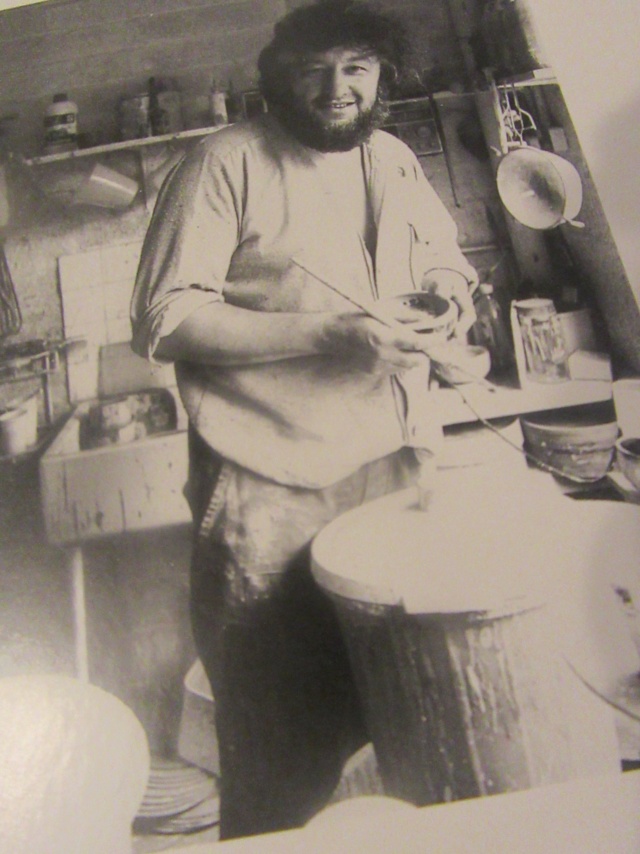 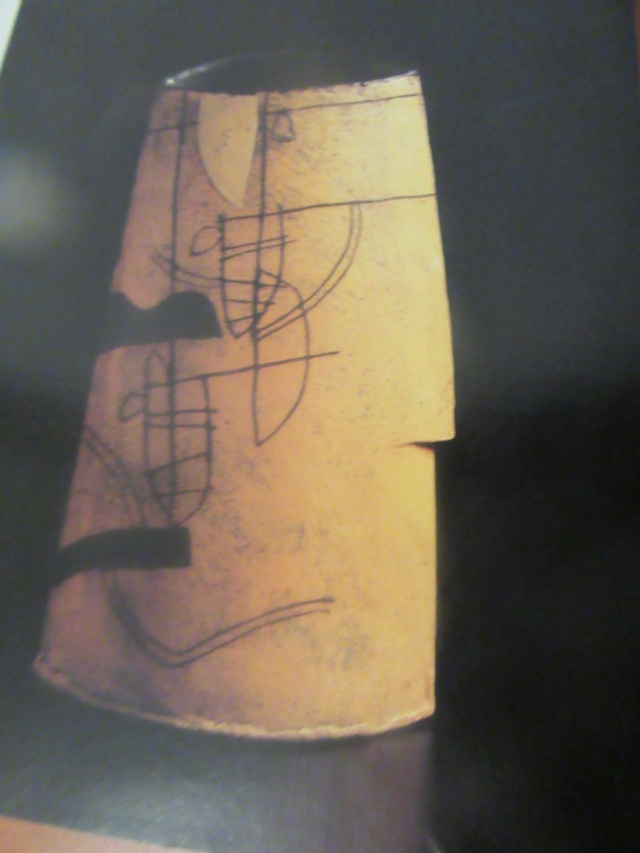 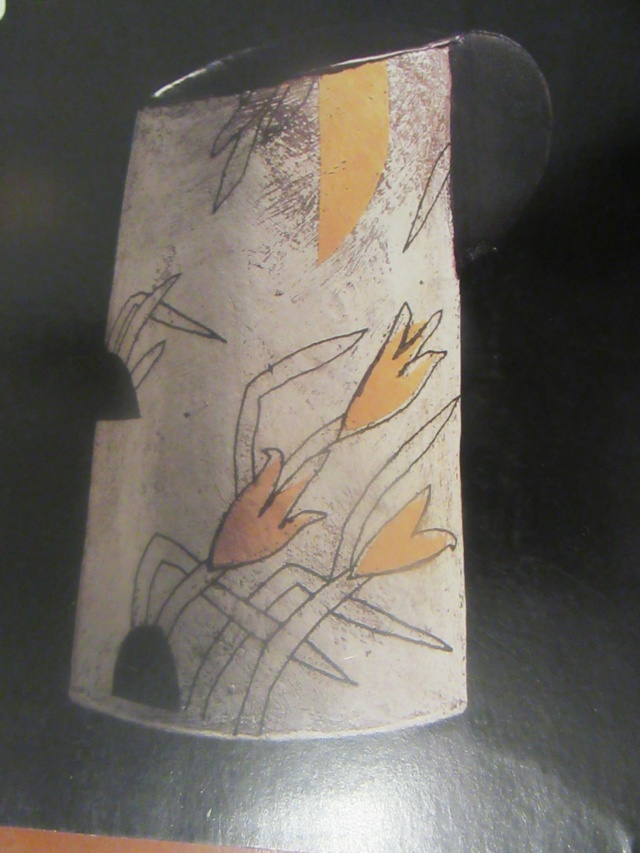 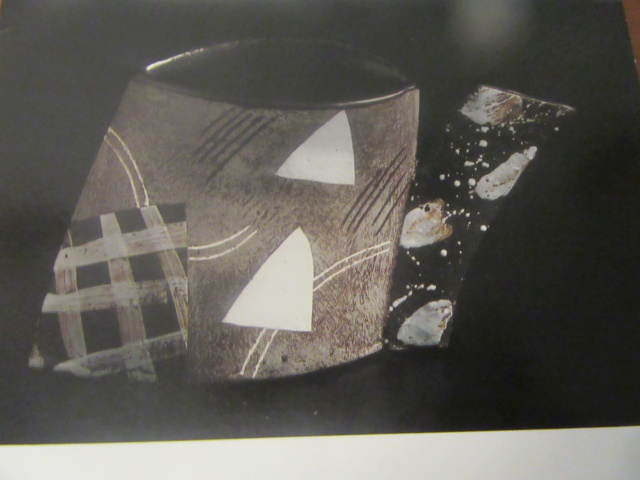 The previous four illustrations come from John Maltby's exhibition at Galerie Besson in 1991. 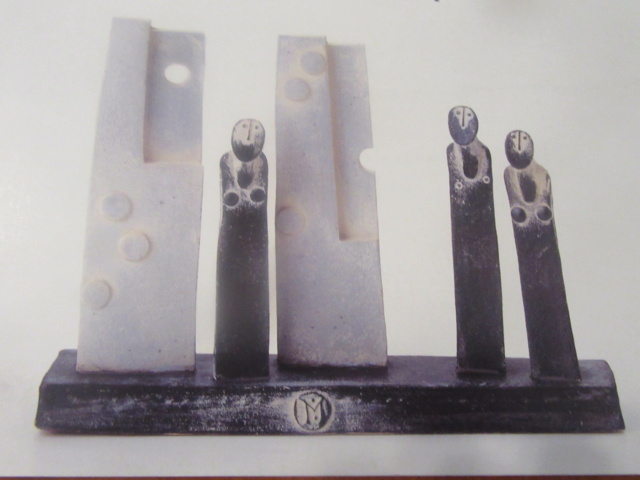 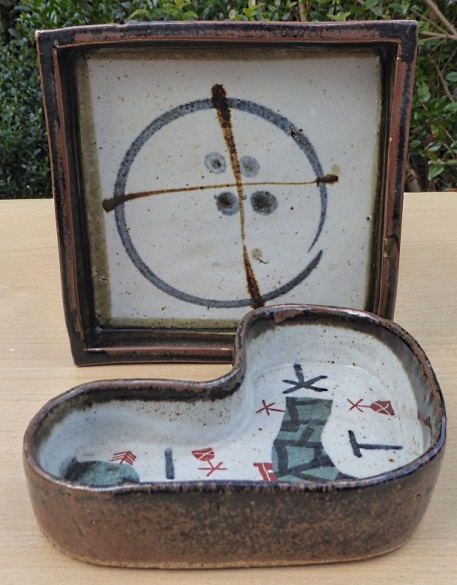 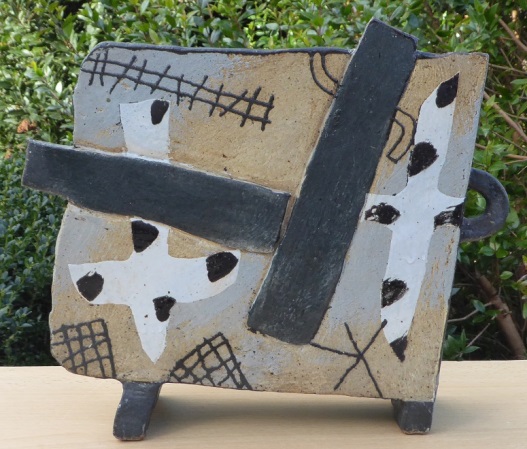 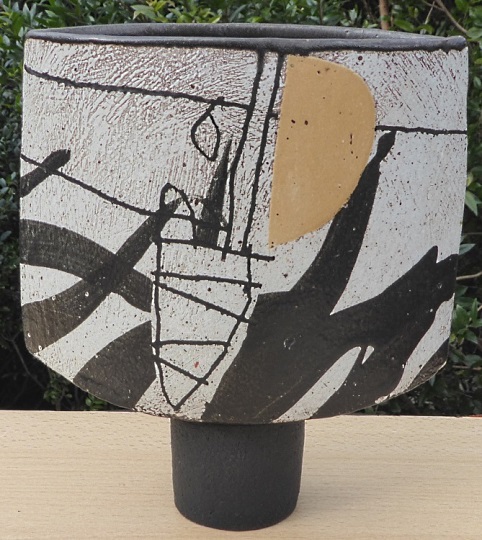 Those two are lovely! The first one with the Birds on is highly collectable seemingly. 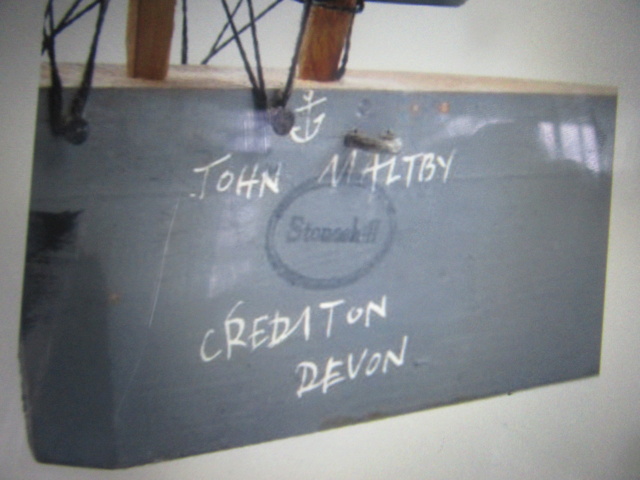 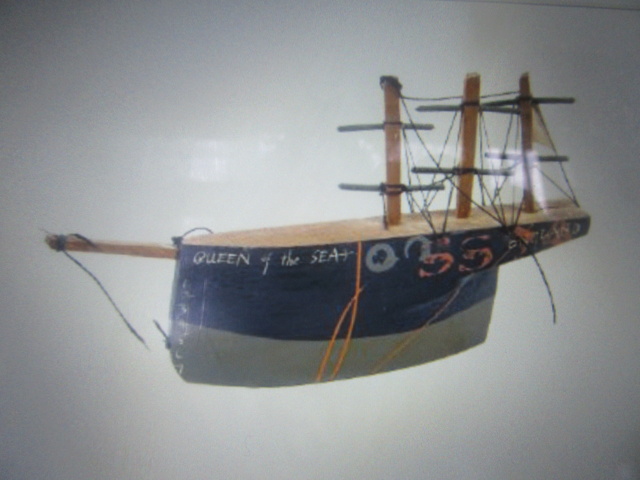 An intriguing Maltby signature combination I a have never seen before. On the upcoming auction of the slightly tatty boat model illustrated.

A couple of bits that went "up north" at the beginning of the week. 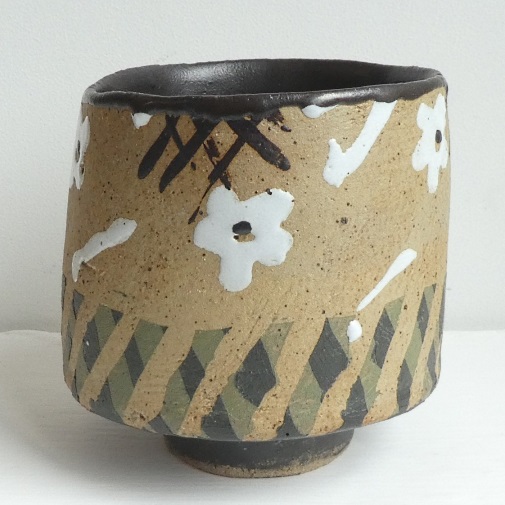 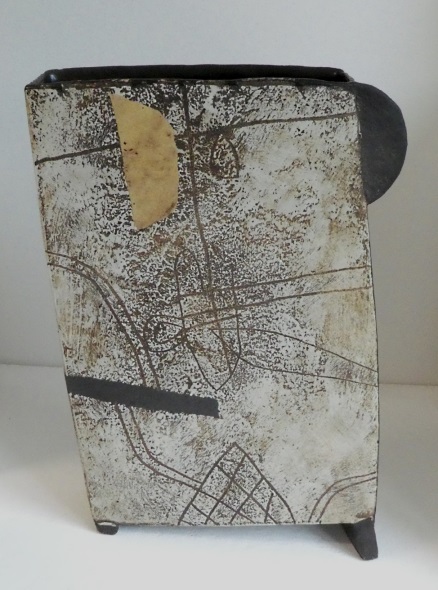 This went "up north" to the same person before Christmas. 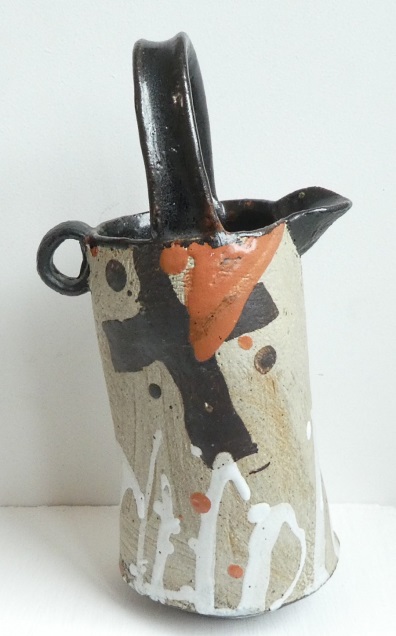 I think it has just found a new home via an online auction site so maybe that is where the real money is being spent.
_________________
Now you should know by now that Potty and I need to see your bottom - we're funny that way!