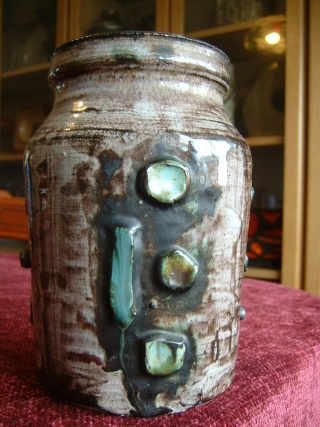 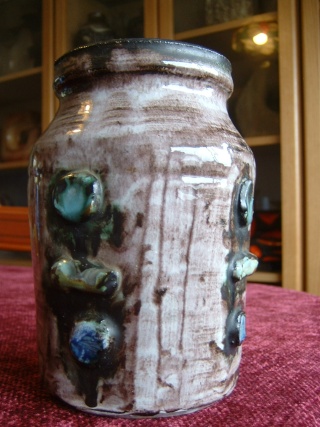 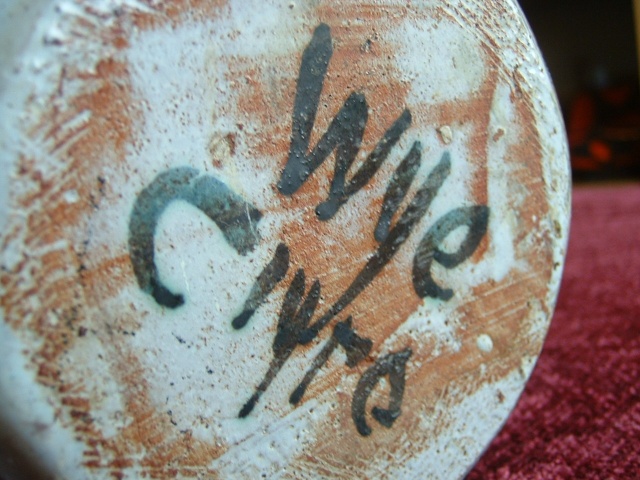 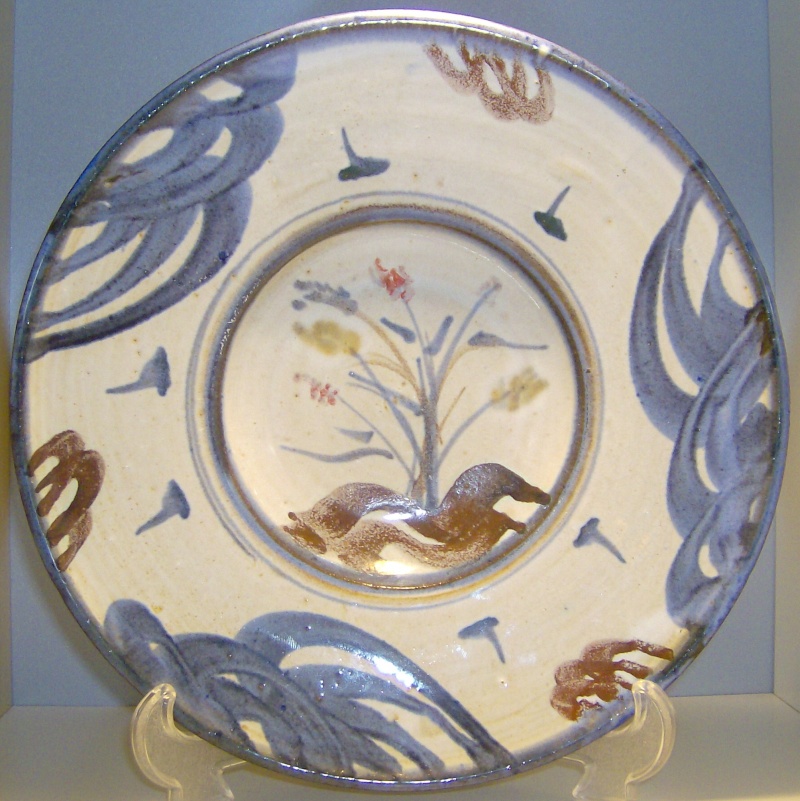 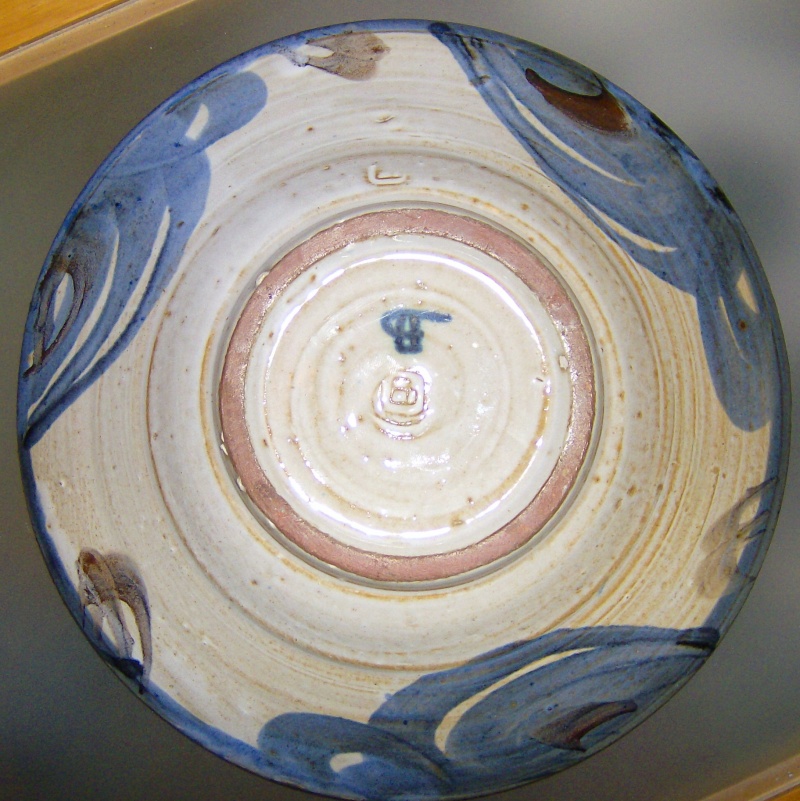 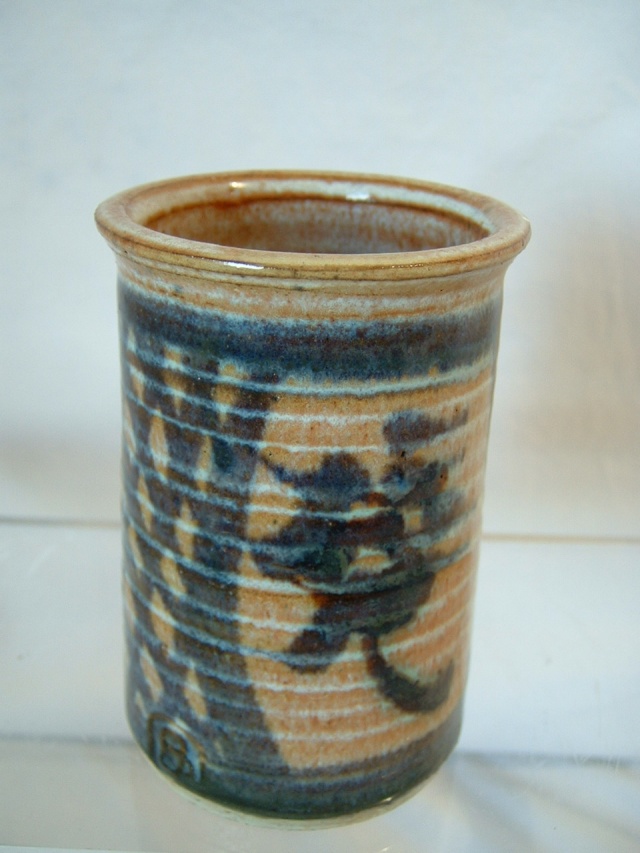 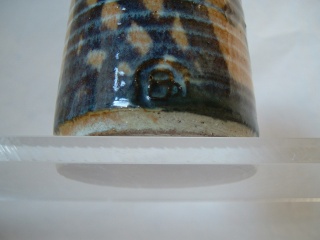 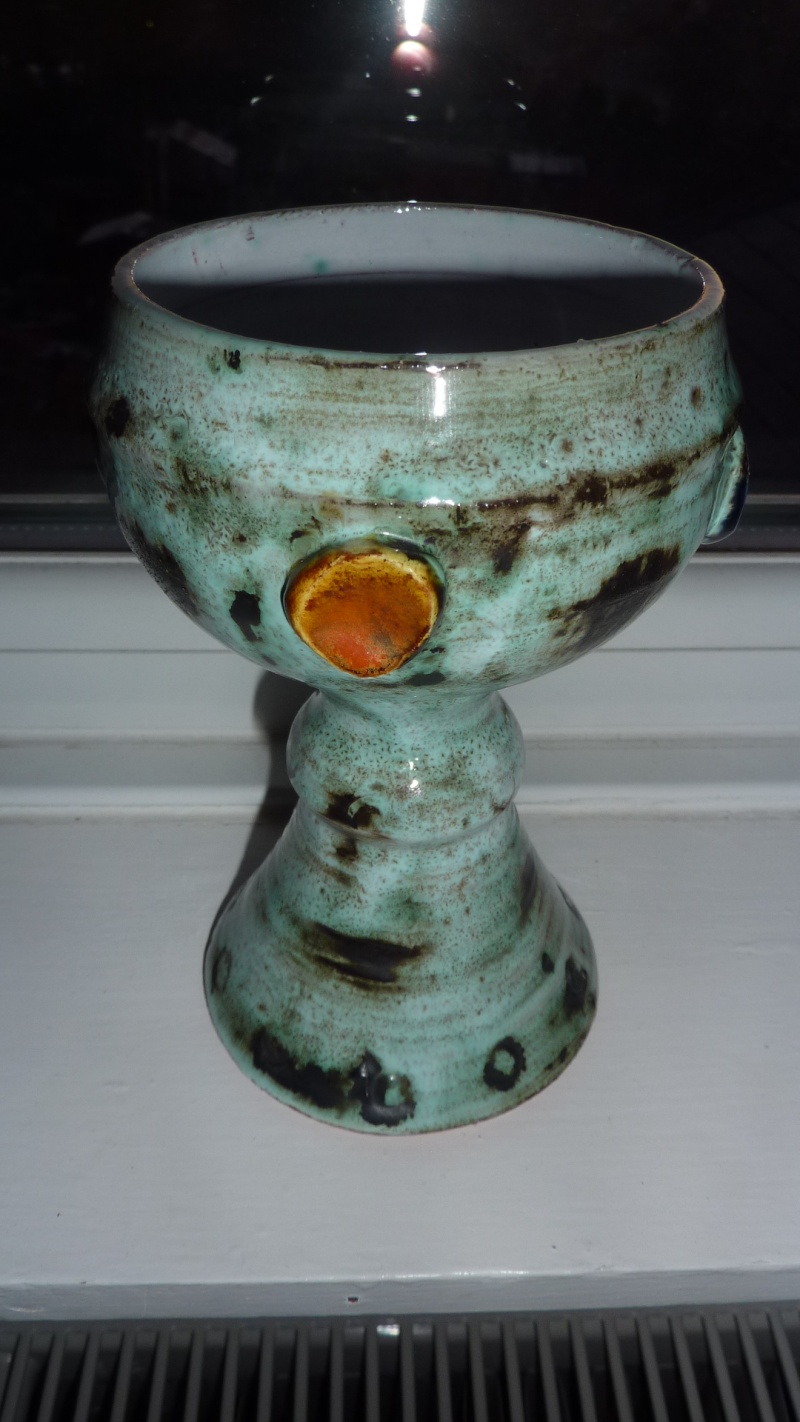 apologies if there is already a thread but I couldn't see it.

I just received an email from Adam Dworski's daughter to say that he passed away in France early last month and below is a short appreciation that she supplied.

It is sad to record the death of this modest man and talented craftsman. ‘Craftsman’ is the term Adaṥ would have used to describe his occupation, ‘artist’ was not his way. While his wife, scribbling out copy for ads and articles, referred to his ‘ceramic art’, his ‘artistic talents’, Adaṥ just called himself a potter .
Adaš’ life spanned most of the twentieth century. He was born in 1917 during the waning of Austria-Hungary. His home town Rijeka, is now in Croatia. On marriage in 1954, he settled in Wales opening the Wye Studio Pottery in 1956. For forty years, Adaš became part of the local scene. Self-taught, Adaṥ was one of the very few working potters in Wales at the time. The nineteen fifties and sixties , hey day of the studio pottery was an era of originality and innovation in the art world and his work has become collectable. Commissions included two figures for Basil Spence’s new Coventry Cathedral and a black Madonna for Martin Luther King’s widow.
The brush work on Adaṥ Dworski’s majolica glazes is distinctive and early decorative pots as well as ceramic figures reflect the genres of the time. His use of rich colour distinguished his work: deep reds, greens and blues and gold echo Byzantium and the Near East. His reference was often the Classical world: Leda and the Swan, Pan and Bacchus jostled with bulls and cockerels, sweet maidens and crucifixes in his kilns and on his worktops. Wales had an influence too. Plaques painted in bright greens and browns depict the sheep- dotted hills, the tiny churches in hidden Radnor valleys.
Primarily an artist he was a lover of nature too: an accomplished skier in pre-war Yugoslavia and the founder of a mountaineering society. Adaš’ spiritual home remained the mountains and forests of inland Croatia and by extension he adopted the French Alps and the Welsh mountains as his sanctuaries. By his eighties kiln, wheel and clay became too cumbersome and he found expression with pastels and acrylics, filling drawing books with rearing horses, golden cockerels, luscious maidens and placid madonnas.
Always drawn to France, Adaṥ and his wife decided to live there permanently and it was in Burgundy, living close to his two sons, that he died this March 6th. In the village of his birth, Fužine, near Rijeka, a memorial service will be held in April. He is survived by his wife Paddy, his children Marijana, Adam and Mark and his two grandsons Samuel and Joseph.

and perhaps an appropriate piece of his work

And the inside. There must be a way to put more than one picture on at a time but haven't worked out how yet

I bought a fairly large Mounted Knight plaque the other day, it has a couple of nibbles/firing faults and as usual the back is finished very crudly, but it's one of the nicer plaques I have seen in my opinion. (8" by 7 1/2")

I believe this to be the work of Adam Dworski of Wye but have been unable to find anything very similar. Could someone please confirm this ID and also give an idea of date as I feel it is early rather than late. Thanks John

This was bought at Ally Pally as a Dworski...do we think it is and any idea of age...your advice please 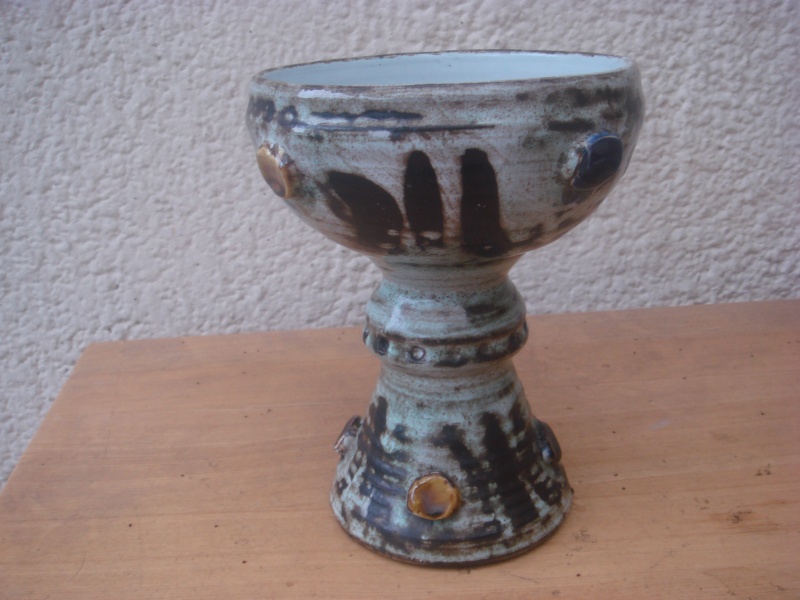 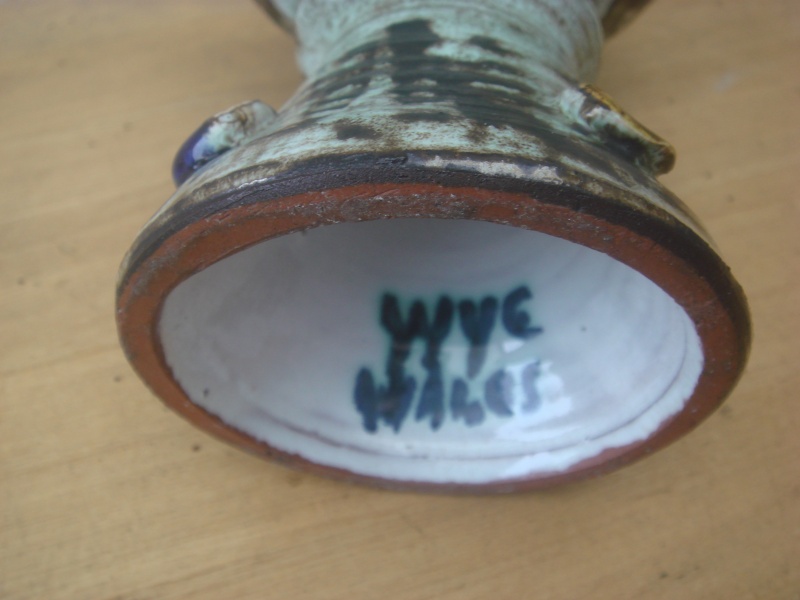 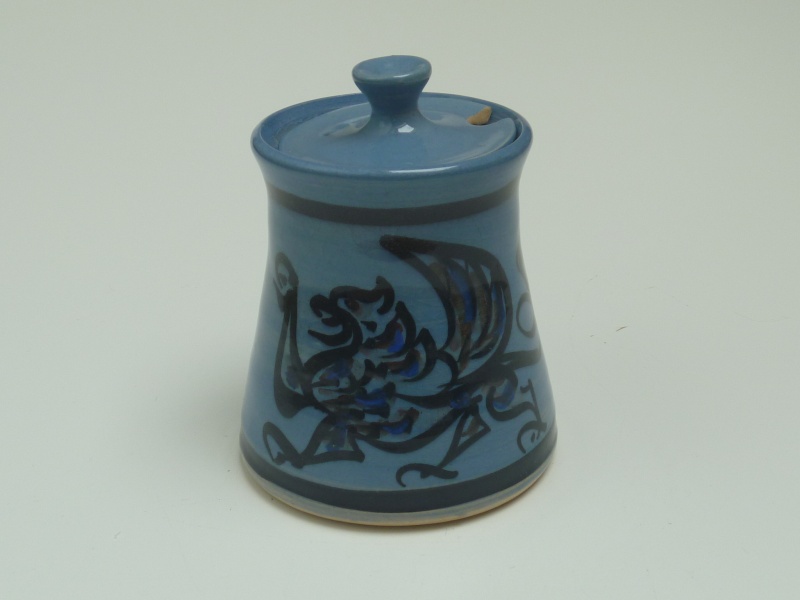 Yes, hard to believe the same potter did the vase and the plaque, very diverse talent.

Little Wye dish.
Decoration looks like a blue apple to me.

I do like the crude runes on the back of this plate. Your fingers touch them when you pick it up, giving grip. It's unexpected and also contrasts with the front. 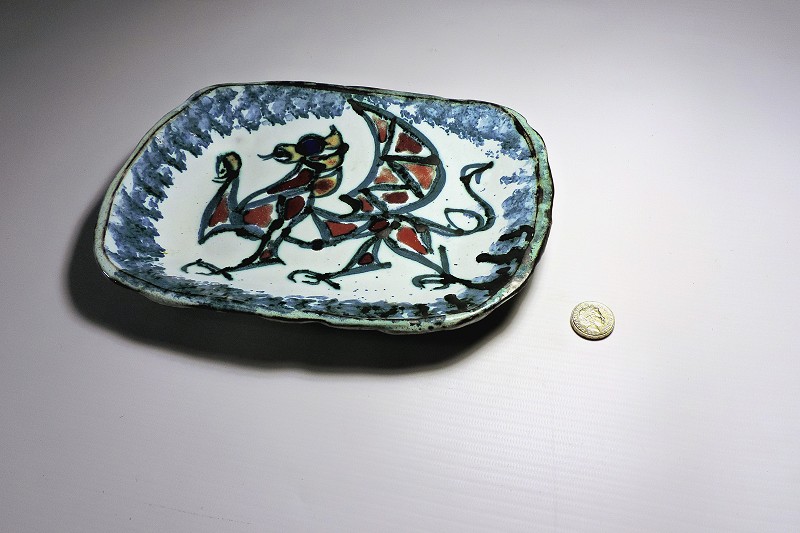 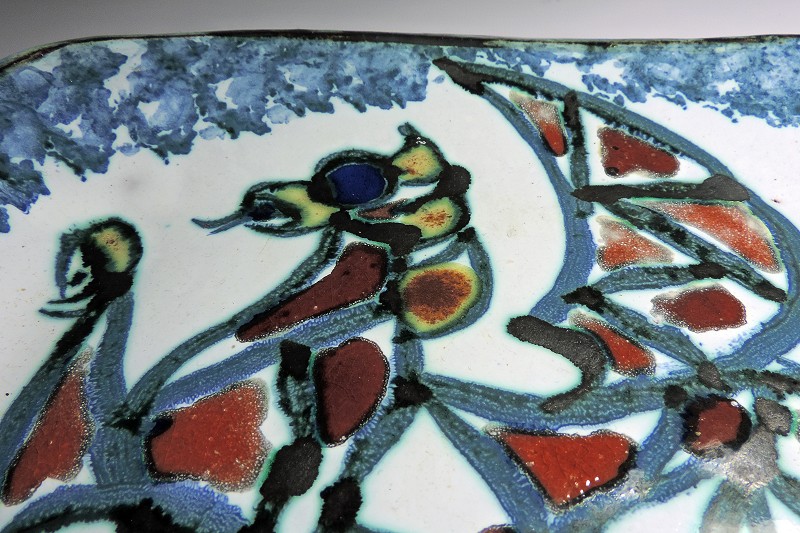 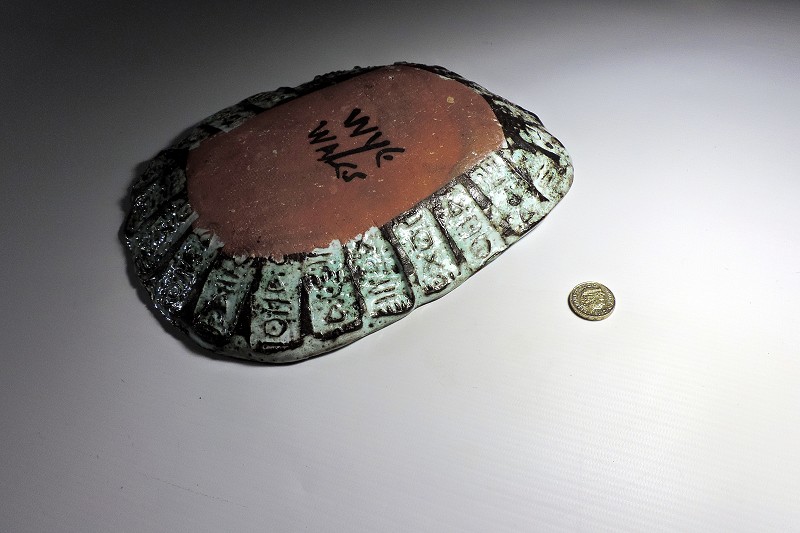