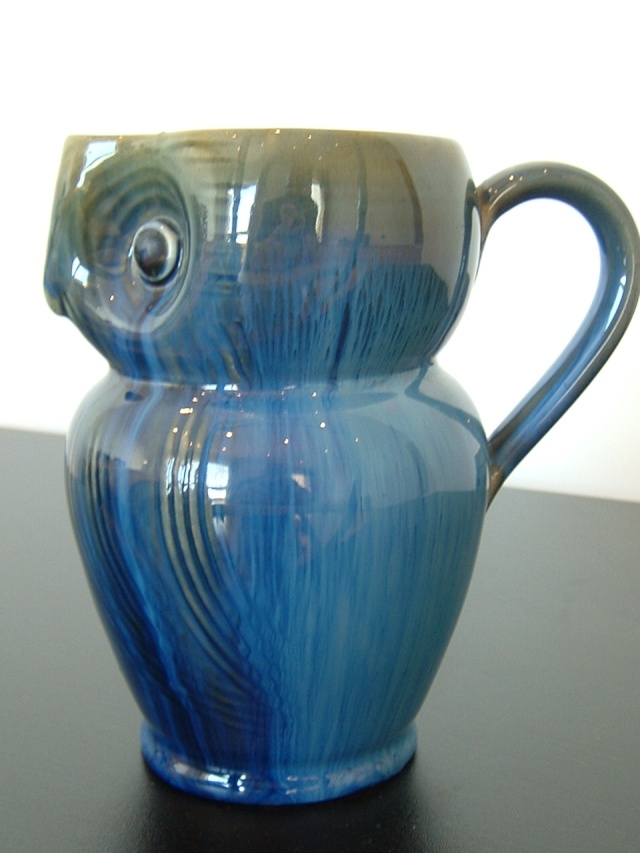 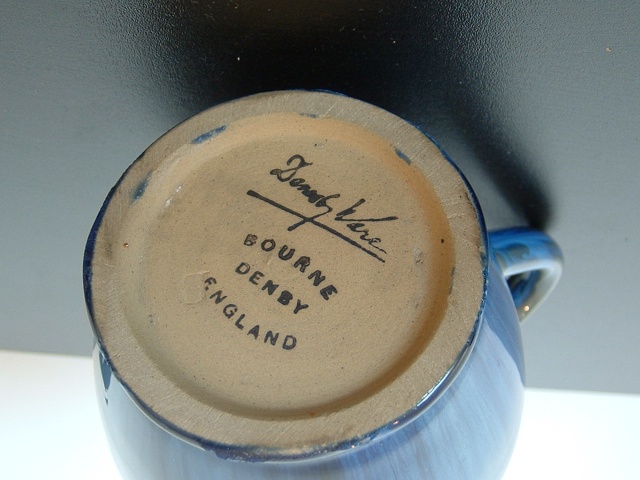 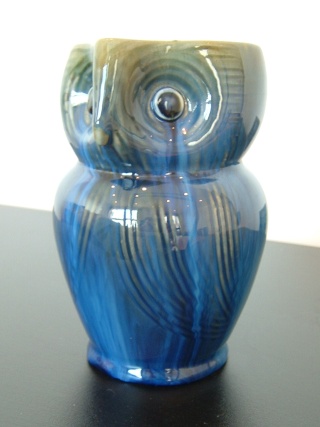 I hope you can help me. I have been given this piece of pottery but don't seem to be able to find out much about it or anything like it. It is marked Bourn Denby. I would be grateful for any info you may have. 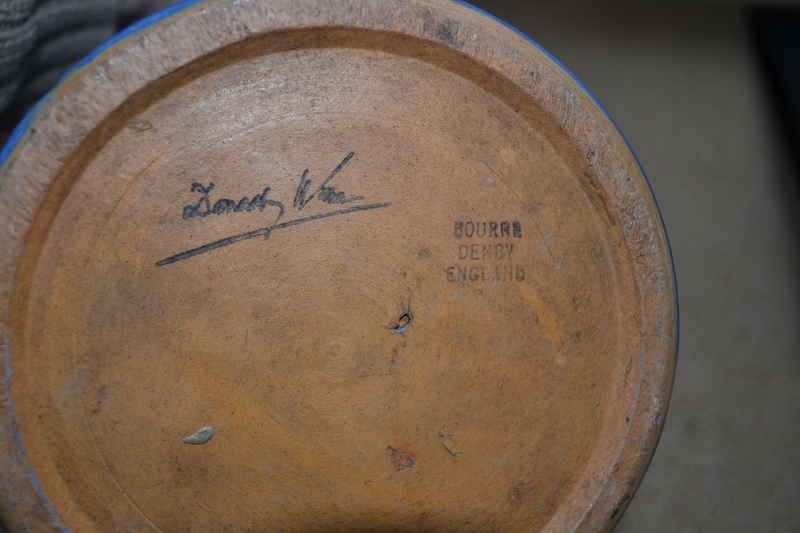 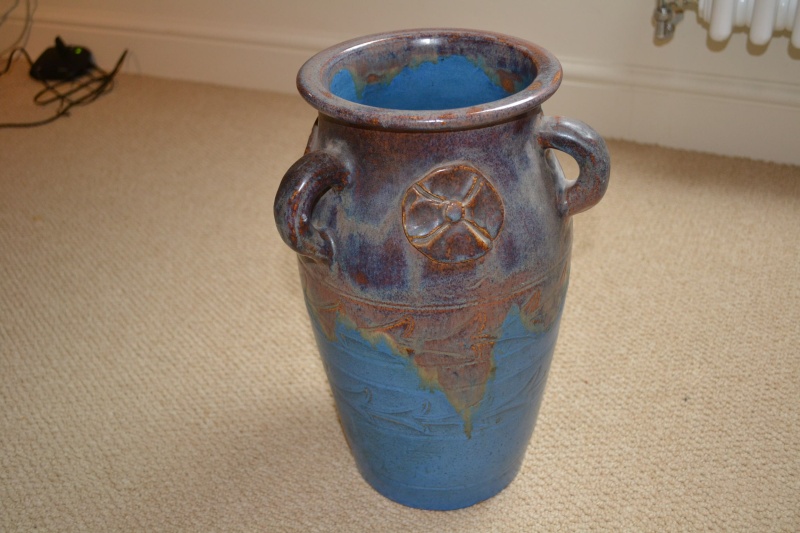 Forgot to mention, its about 18 inches high!

I'm going to move this to ID my pottery, so it gets more attention.

Joseph Bourne & Son Ltd was founded in 1809 and made Denby Ware in Bourne's Pottery, Denby, Derbyshire. All Denby pottery is stoneware.

Danesby Ware is the general name for their 1930's Giftware. Pieces in this particular glaze are known as Orient Ware.

Thanks for the info. Do you have any more info on this piece?

I was hoping to find out if it was part of a particular range, if it had a name or description so i could do more research. And if anyone happens to know the value?

Hi Tony I think Gareth has told you more or less everything. The range was called "Orient Ware" and, as Gareth said, that refers to the glaze. The shape would have been used with other glazes and the Orient Ware range included other decorative ware shapes of the time.

It was introduced in 1926 and 15 to 20 years ago there was a collector's market for this kind of thing. It was something that I would have sold at the time for £40 to £50. These days it isn't really collected and, as your piece isn't an uncommon shape or glaze, it is worth whatever you can get for it. Maybe half the amount above if you were lucky.

Thanks for your help. I had been looking on the web for ages and hadn't found anything in these colours this big! I'll put it back under the atars for now or maybe on the patio!

I forgot that it was that size so it is a little more unusual and would have sold for twice what I said in the 1990s and a little more than I suggested now.

I think that you a wise to keep it though and I have a couple of large Denby items put away with the hope that one day they might fetch what they did in the past.
_________________
Now you should know by now that Potty and I need to see your bottom - we're funny that way!

Any info on this little Denby vase appreciated. 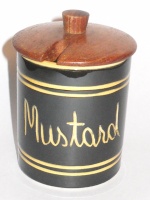 Thanks for that. Good info. Shame about the fall in value but I'd be okay with the £30 mark as it isn't something that fits in with my personal collection.

3 more Denby Bourne to add to the thread - I was very temped by the squarish planter on the left, and the jug in the middle. The photo doesn't do justice to the blue glaze of the jug.

Base of the jug:

So don't fret if you have a loft full of the stuff!

The large vase is/was a "Derwent" vase (large size). Pretty rare, and in a good colour.
They were used as stick-stands so are often damaged.

An unknown design thay turns up occasionally. It presumably had a name, but I've
never found out what it was. Late 1930s, and probably by Alice Teichtner, 9 in high.

A rare pair of unmarked "Silver grey" candlesticks, NIB, deigned by Alice Teichtner 1931.
Influenced by, and often mistaken for, the stonewares of her native Germany. 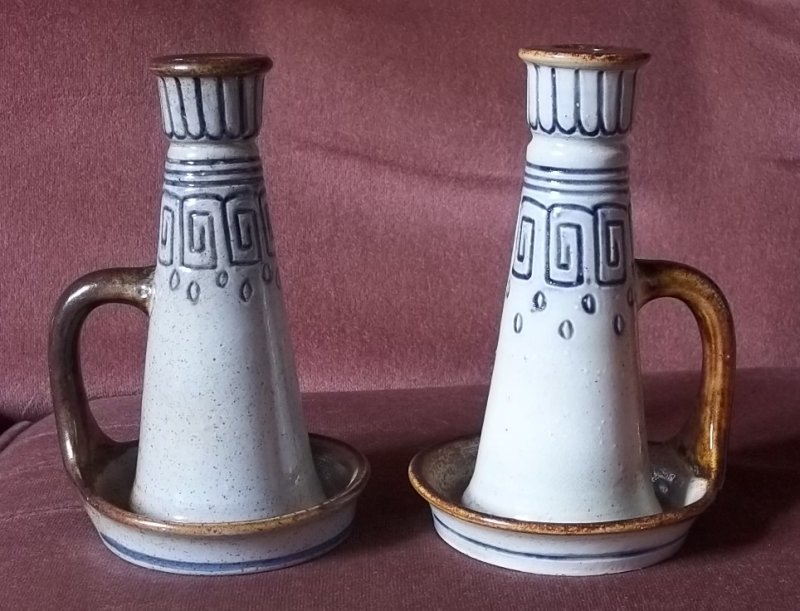 Bourne Denby bowl, 'Denby Grey'
The blue decoration round the sides was a bit messy so left it.

Denby "Danesby Ware" was a generic name, used from c1920 through
into the mid 1930s, on most of the decorative ranges of that period.

If they were actually marked as such, usually along with a Bourne
Denby England mark, it can be found on: