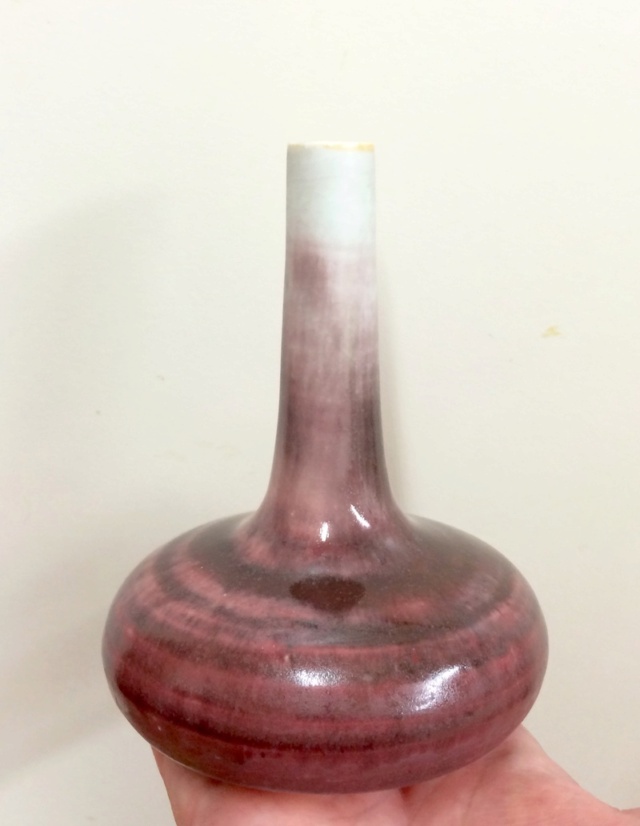 The attraction of Derek Davis's work is that it is so difficult to obtain. Where did you get all those from Dan? The pleasure is all the more exciting when you get one. Had this red trumpet vase for over 20 years, and Still have not seen much better in his work. 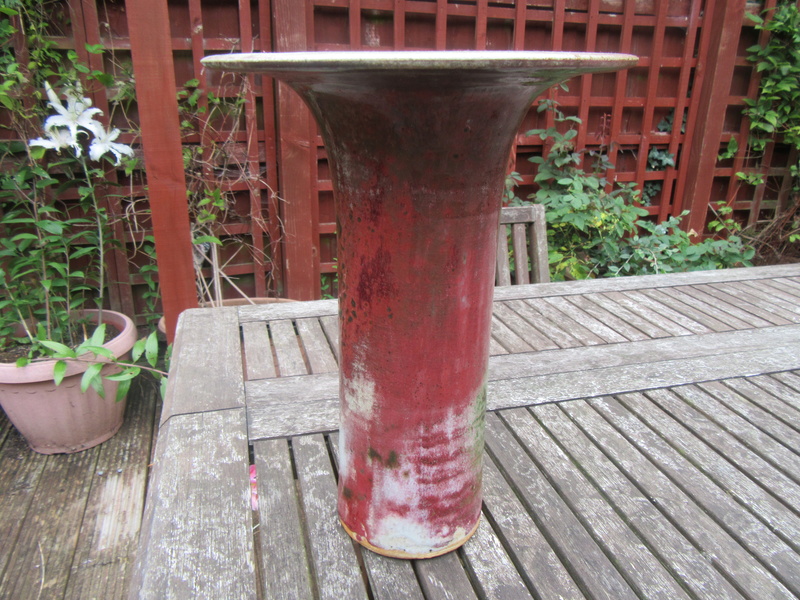 His blues can come in many shades. 8 inch bowl 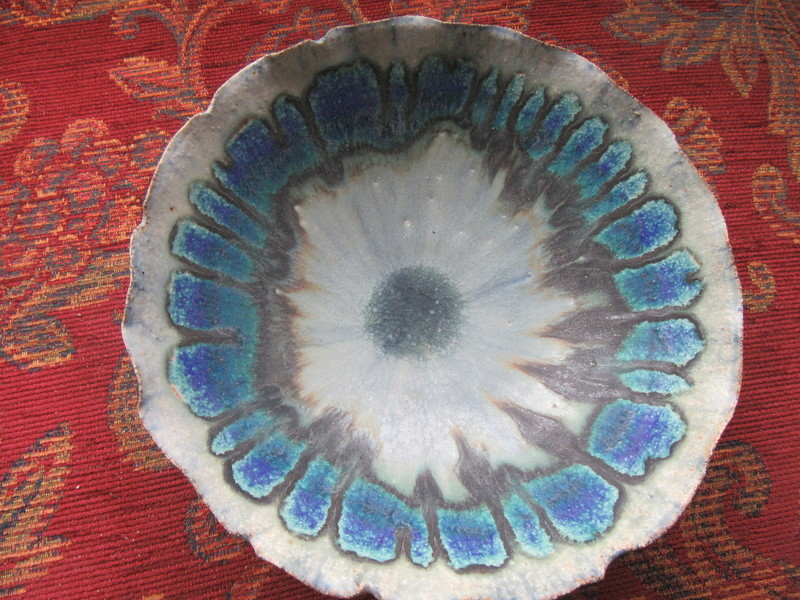 8 inch narrow aperture vase which is another of our favourites. 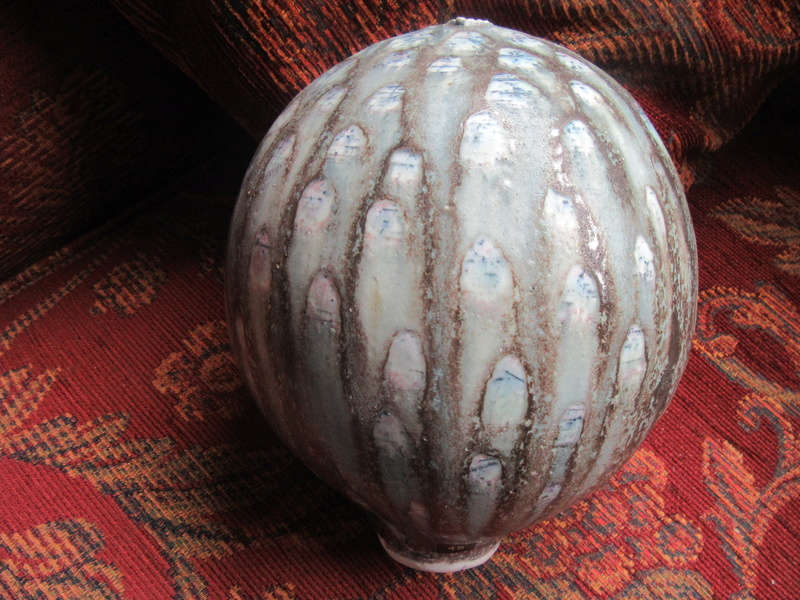 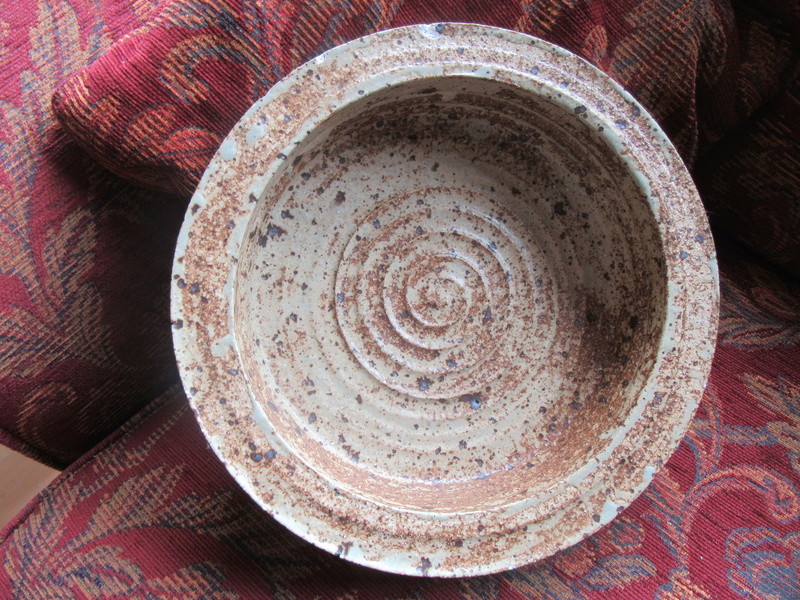 I have been buying his work where ever it turns up for sale in auction for around 10 years Phil although  my first piece was picked up at a village fair for 50p and my blue glazed bowl was bought at an antiques fair
My biggest find was the three lamps that were all in one lot at auction, the auctioneer lives down the road from me so free delivery was included!!
_________________
Making new friends as an adult is hard...because I don't want them.

Well I wasn't expecting this to be by Derek Davis 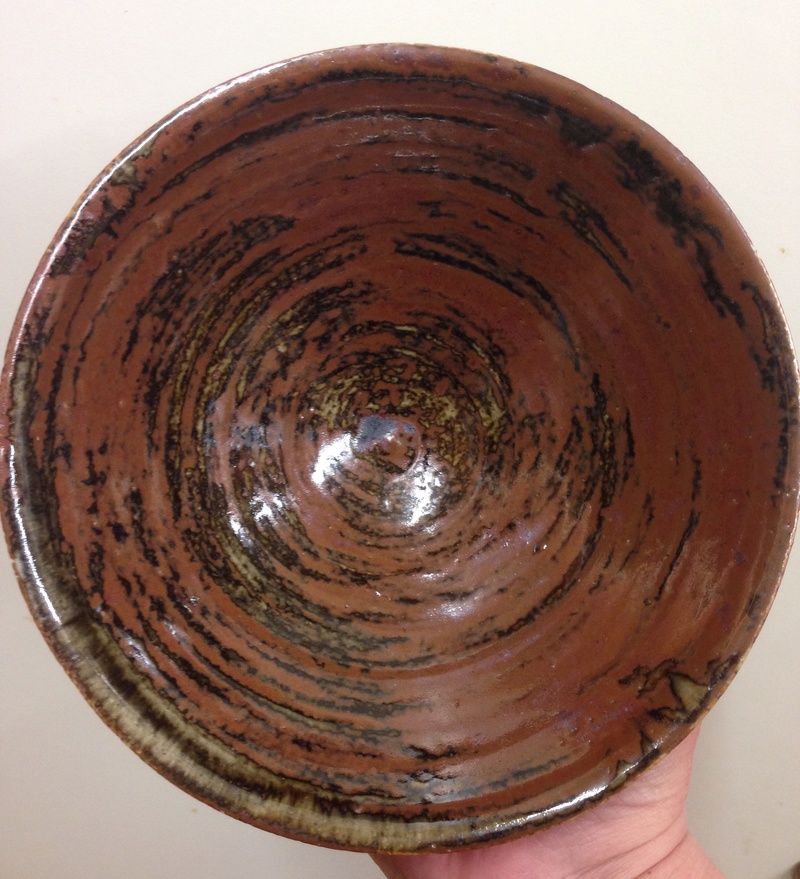 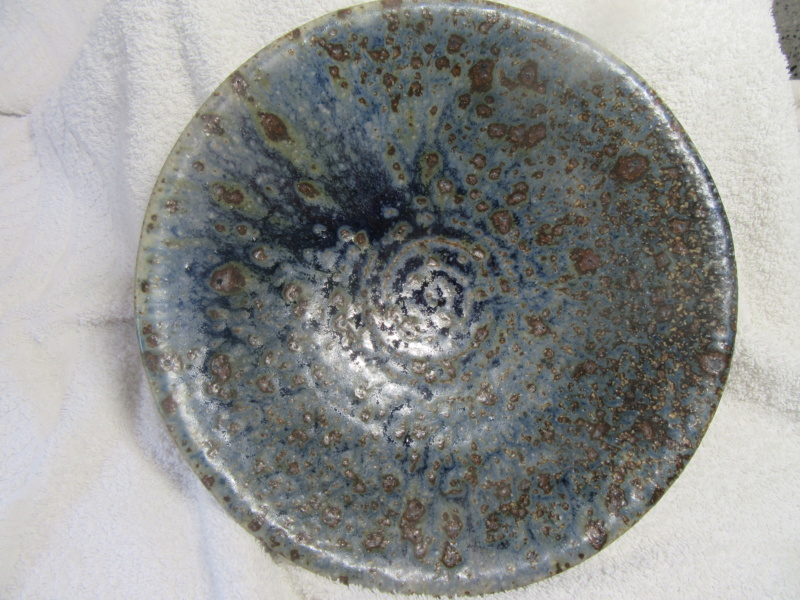 An early bowl from 1965, quite near the start of his potting career,

Interestingly enough I have put this one up on you know where, and got a message from his son Josse saying the date was right, and that he started potting seriously in 62/63. Mind you, it is also marked 19651 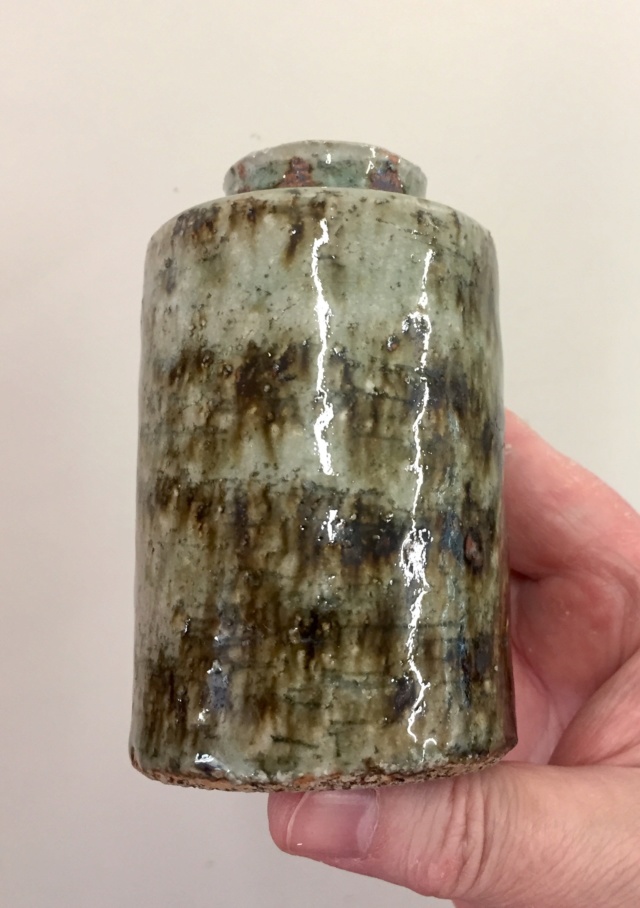 Hello, Derek's son Josse here. Yes the piece in the photo above this is a Derek Davis. Just joined the forum to say that whoever wrote "didn't really exhibit widely, at least in his later years, and would probably have preferred to have been remembered as a painter. I'm certain that he wasn't as prolific a potter as, say, Lucie Rie or David Leach." was wrong. He potted for some 50 years  around 6 to 7 days a week often up firing the kiln all night. Especially his sump oil kiln.
There is a book out on his Pots and Paintings.

Hi Josse,
It's very exciting that you have joined the forum.
Your father is one of my favorite potters and I would love to see any pics you have of his work.
I have found very little info online about Derek so would love to hear more about him and his long career
_________________
Making new friends as an adult is hard...because I don't want them.

Many thanks for the info, Josse. I’ve added the info about the Bellmans auction to our Markets and Fairs etc forum and I’ll edit your post above as this thread concentrates on your father’s work
_________________
Carrot cake is just fake cake

Thank you for getting back so soon. Mum recently passed away and now I've moved back to the family house and back throwing in the studio Derek taught me back in around 1964. If anyone is interested I have copies of his book Derek Davis Painter Potter. New to this, how do I insert an image?

Thanks for that. Now I can treat you to the first glimpse of a 1959 stoneware kiln opening. This is how ahead of the pottery market he was. Nobody else was making anything like this at that time. I still have the pieces, and they are big! 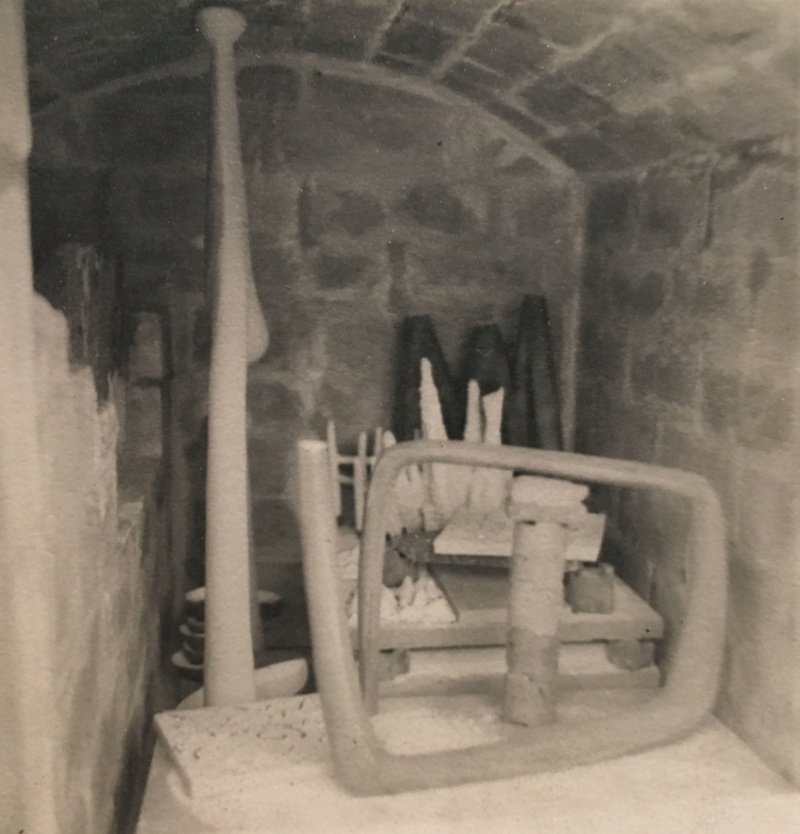 Trained under a variety of artist tutors doing the rounds of London in the late 1940s early 50s amongst them, Frank Dobson the sculptor. He taught Derek mould making. These pieces are slip cast and at that time galleries hadn't ever seen studio slip cast work. They wouldn't touch it. He was twenty years too early! We had to wait until the likes of Richard Slee and the slip cast revolution happened in the 1970s. By that time Derek had moved on and on. He never stopped exploring for a second.

Better photos are in the book but here's a few I have on my computer. Top photo Slip decorated with earthenware glaze, late 1950s for Heals. Middle photo, tin glaze inside and rubbed iron exterior, 1959. Bottom photo with slab form early 1960s, a worm plaque mid 1960s and coffee beaker and saucer also mid 1960s (sold at Liberties.) 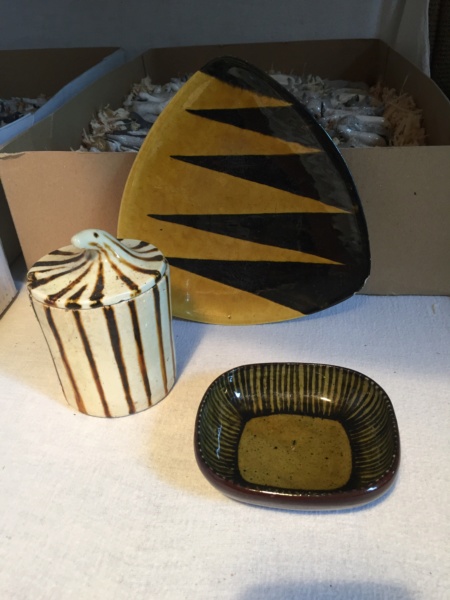 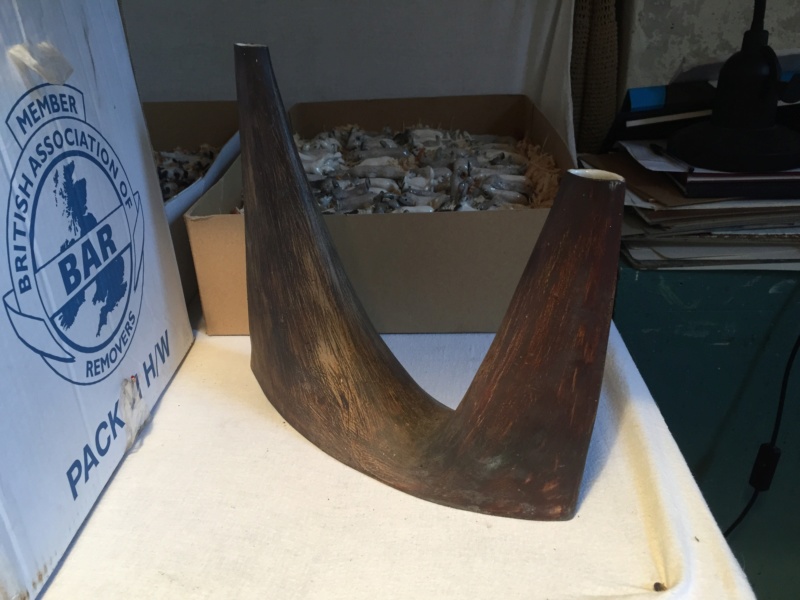 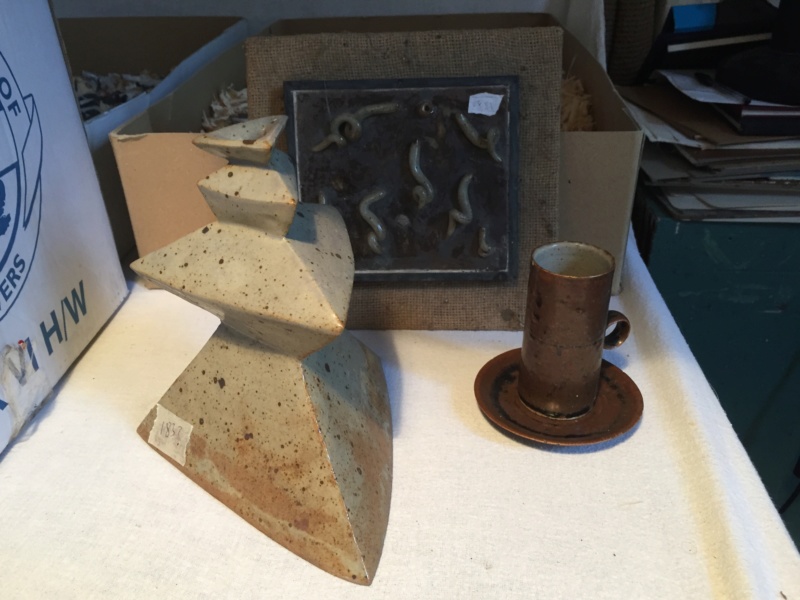 A reminder to members that we are a non-commercial site and links/posts to sales sites will be deleted.
_________________
Carrot cake is just fake cake