Derek Davis sadly passed away in September 2008. He was interested in art from an early age, but his studies were interrupted by the Second World War, when he joined the King's Royal Rifle Corpos in 1943. After the war he qualified for a grant at the Central School of Arts and Crafts where he studied painting and sculpture. Derek Davis and his wife, Ruth, settled in nearby Arundel in 1955 where they remained for more than half a century.

He pushed the boundaries of clay, at a time when most potters followed the teachings of Bernard Leach. This stemmed from his imagination and inquisitiveness for materials and ideas more aligned in fine art. Since 1994 he concentrated on abstract and figurative signature style painting. He enjoyed considerable success with at least 20 solo exhibitions worldwide including three at the V&A. Derek Davis' work can be found in a number of collections including V&A, Contemporary Art Society, Garth Clark Colorado, Aberdeen MusDerek Davis, who has died aged 82, was one of the pioneers of postwar ceramics, internationally respected for his stoneware and porcelain. His work can be found in museums, galleries and private collections all over the world. Latterly he returned to painting, emerging as an artistic commentator on life in the latter part of the 20th and early 21st century in the manner of Hogarth.

Born in London, Derek came from a long line of craftsmen. His father owned an umbrella shop in south London. He grew up in a musical household. His father was a talented musician who played the cello and the piano, and together with his mother, who played the violin, his sister Jean on piano and two uncles, they formed something of a family orchestra. Derek inherited the family's love of music and was passionate and knowledgeable about jazz, particularly the blues.

His education was interrupted by the second world war and he went to several schools: first Emmanuel school, Wandsworth, and then to schools in Caterham and Oxted, Surrey. On leaving school in 1943, he joined the King's Royal Rifle Corps.

Derek had known from an early age that he wanted to be an artist. After the war he qualified for a grant to the Central School of Arts and Crafts, which enabled him to study painting and sculpture with fashion drawing for three years from 1945. There he met the potter Eric James Mellon, who was to become a lifelong friend.

On leaving the Central, he had brief teaching jobs, but Britain in 1950 was not conducive to the arts and both he and Mellon felt they needed a more constructive way of making a living than painting. Pottery seemed to be a viable proposition, but having no technical knowledge of ceramics, they engaged the help of a friend, John Clarke, a painter who had studied ceramics. Together they bought a kiln and rented a vicarage in the hamlet of Hillesden, Buckinghamshire. Here, along with three talented young women artists - Ruth Lambert, Martina Thomas and Mary Mansfield, who later became their wives - they started to make pots, calling themselves the Hillesden Group.


The setting up of the Crafts Centre of Great Britain in 1948, followed 10 years later by the Craftsmen Potters Association, did much at this time to promote the work of studio potters such as Derek. The early 1950s heralded a renaissance of crafts, and new craft shops and galleries sold their works. In 1953 Derek began to do work for the gallery Primavera, London, owned and run by Henry Rothschild.

The Hillesden Group disbanded in 1955 when Derek and Ruth, and Eric and Martina, moved to Sussex. It was about this time that Derek met the sculptor John Warren-Davis. A contemporary and acquaintance of Barbara Hepworth and Ben Nicholson, Warren-Davis told Derek that during the liberation of Paris in 1945, he had met the sculptor Brancusi, and that this meeting changed his life. Warren-Davis's influence on Derek in turn affected a change in direction, allowing him to see things from a new perspective.

The 1960s were a fruitful and successful time for Derek. In 1960 he joined the Arts and Crafts Exhibition Society and showed for the first time at the Victoria and Albert Museum, exhibiting some of his last terracotta pieces. Thereafter he concentrated on making stoneware and by 1963 had developed the sang de boeuf and aubergine glazes for which he is renowned. The development of his signature, vivid turquoise-blue barium glaze, followed in 1970 and is closely associated with his work of this period.

During the autumn of 1967 Derek was artist in residence at Sussex University, an experimental time culminating in a lecture and two exhibitions. Exhibitions worldwide followed as his reputation grew, and in 1976 Sir Roy Strong selected Derek and his fellow potter Mary Rogers to represent the "Spirit of the 70s" for an exhibition at the V&A. Exhibiting in prestigious galleries such as Peter Dingley in Stratford-upon-Avon and Amalgam in London assured Derek a place alongside the likes of Lucie Rie and Ruth Duckworth as one of the most prominent potters of the decade.

By the late 1970s he had ceased to throw and concentrated on hand-built pieces, sophisticated shapes developed from studying modern sculpture, decorated with themes of social comment. Moving from clay back to paper and canvas seemed a natural progression, and in 1991 he finally stopped working in clay to concentrate on his painting.

Derek lived a creative and artistic life. A stimulating conversationalist with a great sense of humour, he was interested in a wide range of ideas. He lived for many years in Arundel, West Sussex, and contributed greatly to the local artistic community. He was a devoted husband and father and a loyal friend. There are many artists, of whom I am one, who will remember him with great affection and gratitude for all his encouragement and generosity as they started out.

Intellectually stimulated by the work of painters, sculptors, musicians and writers, and unhindered by the craft potter's devotion to traditional methods, Derek chose to express himself in clay for many years, but never lost sight of his fine art origins - his influences were not potters, but sculptors and painters such as Matisse and Picasso. He was one of the first artists whose work bridged the fine art/craft divide.

He is survived by his wife and son Josse. 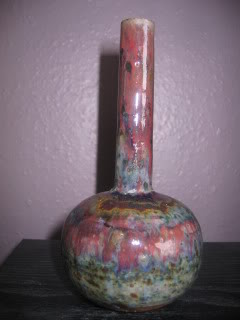 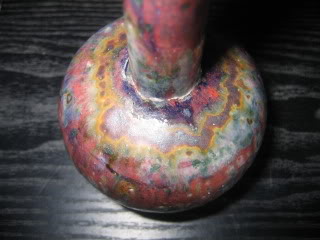 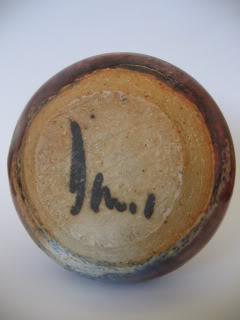 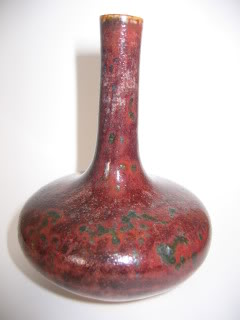 what size is it please?

it measures at 8 inches across the rim.

Derek Davis didn't really exhibit widely, at least in his later years, and would probably have preferred to have been remembered as a painter. I'm certain that he wasn't as prolific a potter as, say, Lucie Rie or David Leach. 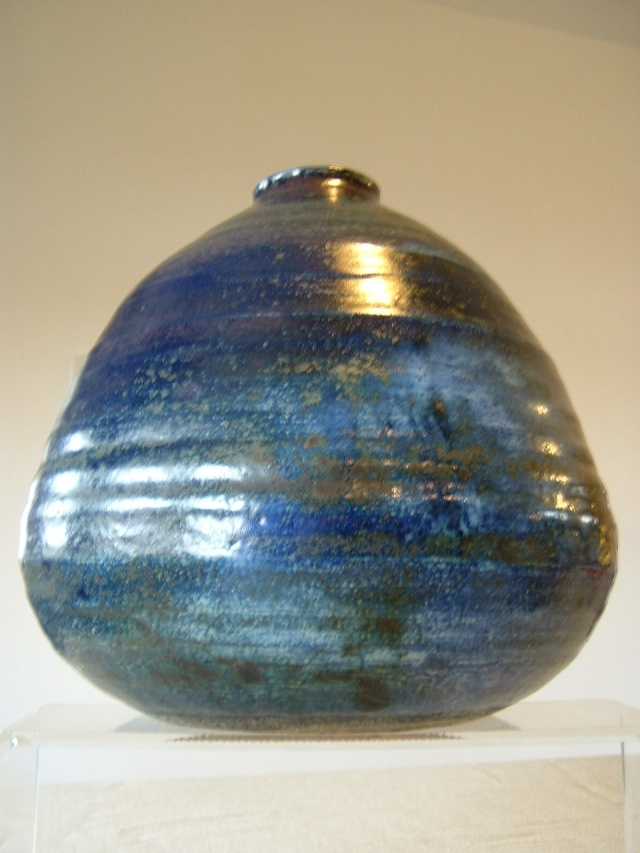 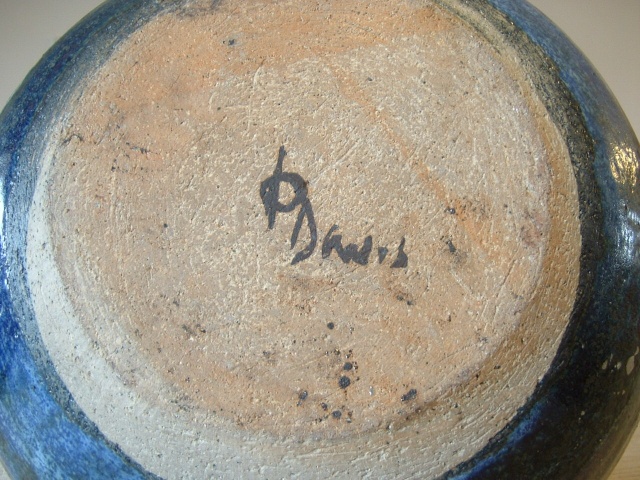 As they were handpainted there are slight variations , mine would be from around 1962 .

yes yours appear to be after mine . 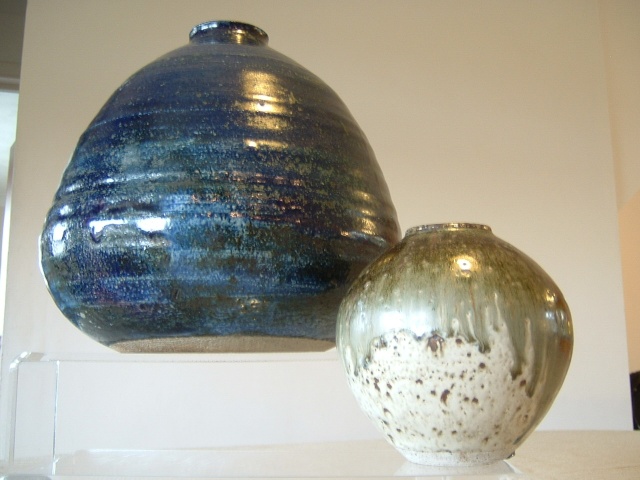 It is a large heavy piece weighing 3.5 k and measures 24 cm high

the dates are in the british studio ceramics book by paul rice , but yes of course I knew that anyway

Davee wrote:Just to add to the confusion I have a CPA yearbook from 1980 that shows the signature the same as the one on Ed's piece 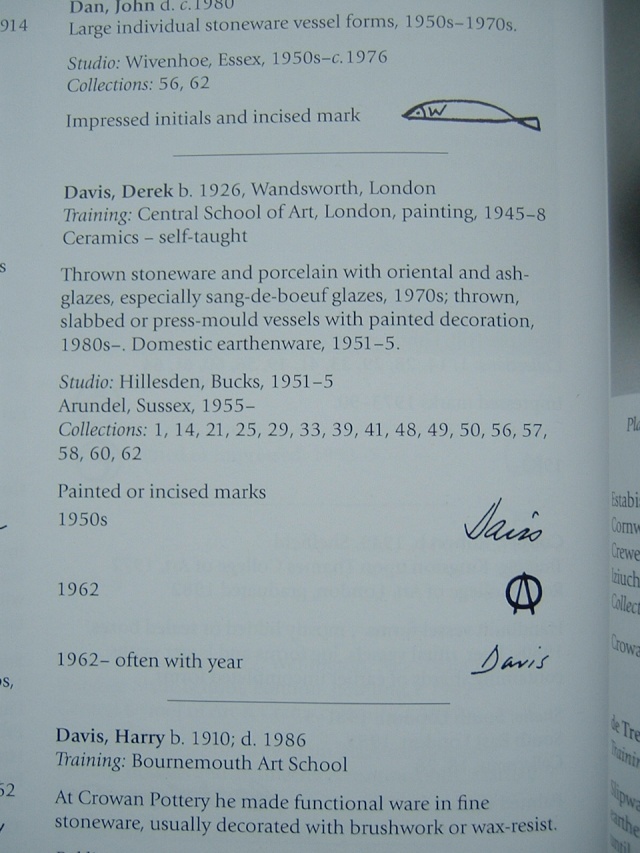