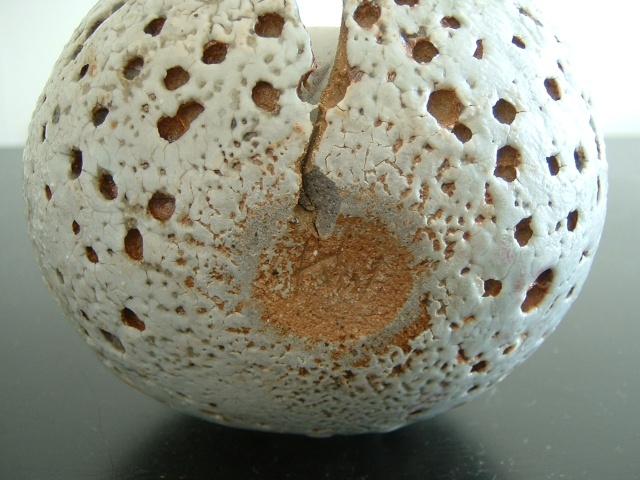 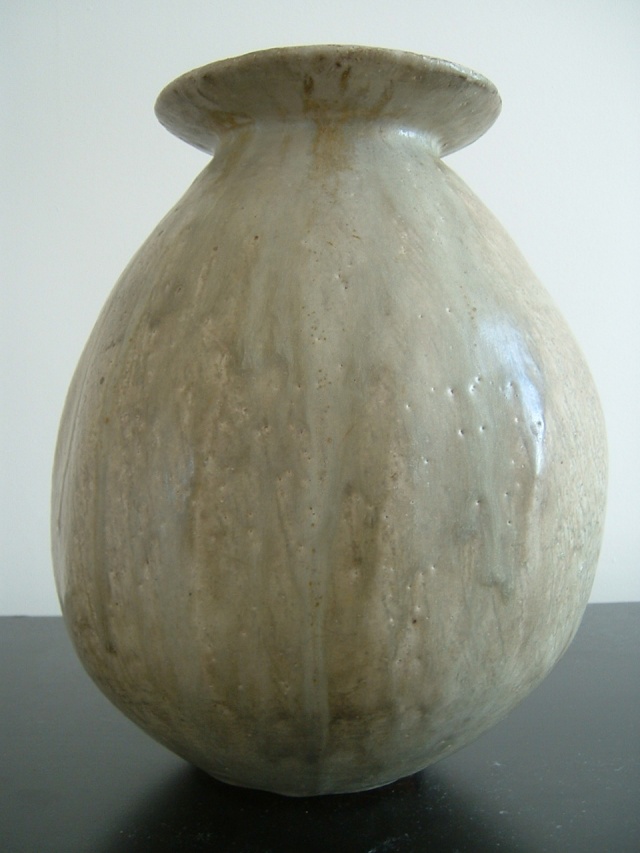 10" high and girth of about 27" very heavy , early piece I imagine , it has melted glass inside base and glazed inside ( dunno why) , would like to find out date of . 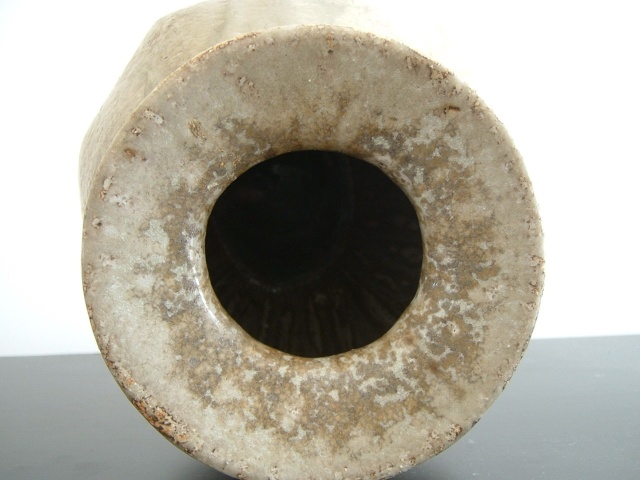 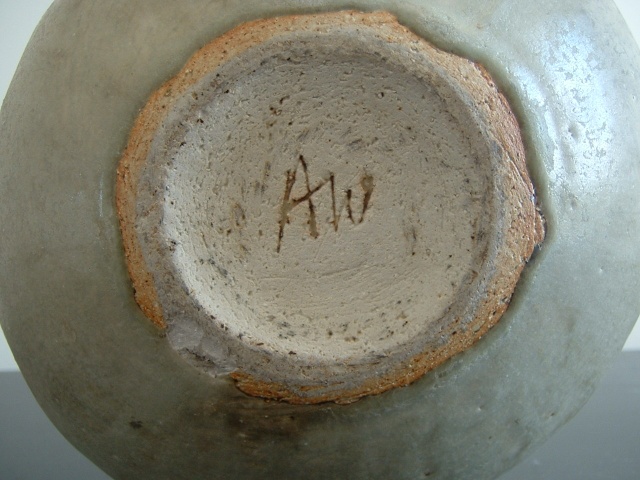 From what I've read on this thread I'm assuming this is a Alan Wallwork decorated tile.
Tile from H & R Johnson Ltd

Sorry to hog the board folks, but with it being cold & damp (in normally Sunny Southsea) I've started to fight my way into the loft and wade through several hundred newspaper wrapped pieces!
I have no provenance on this, but it looks very Wallwork - my query is because the mark on the base is very shallow?
Thanks,
Alan. 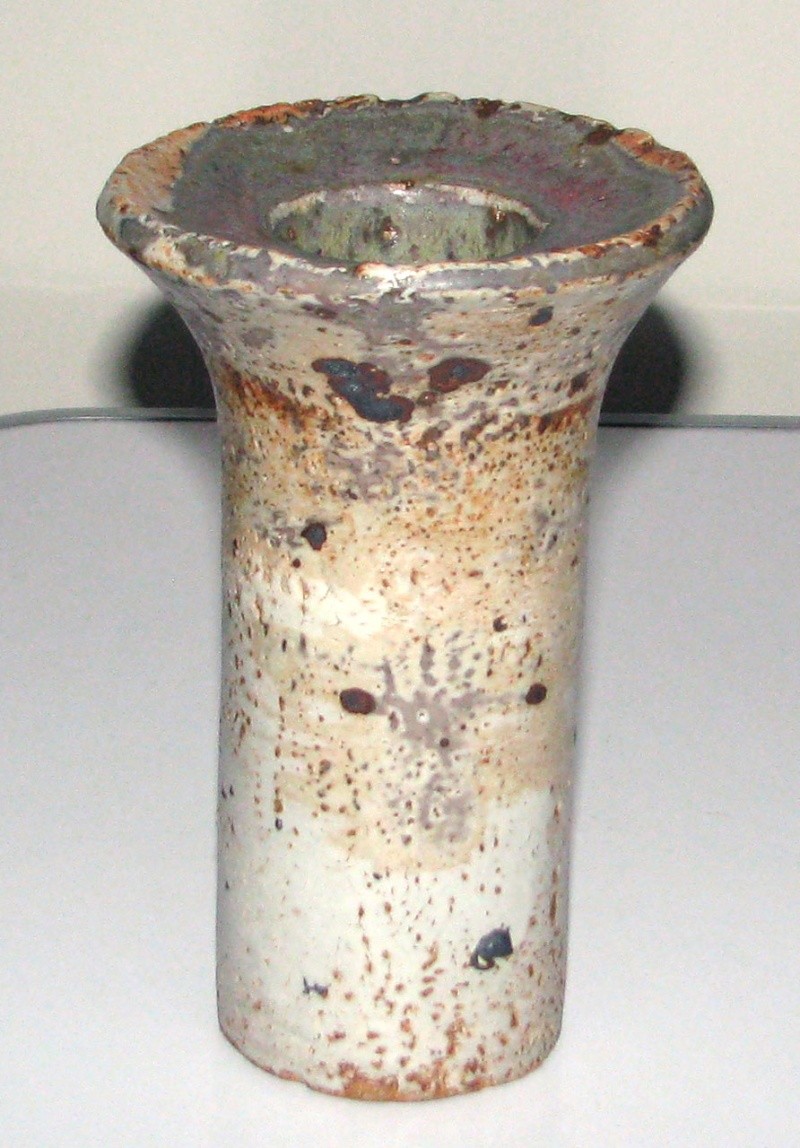 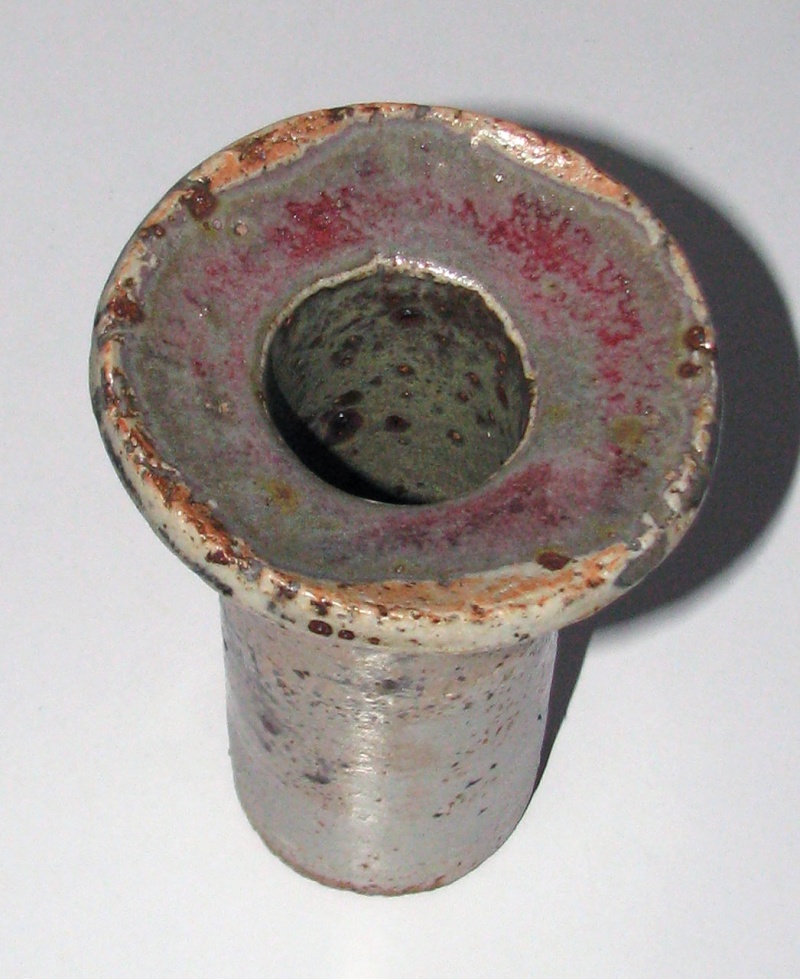 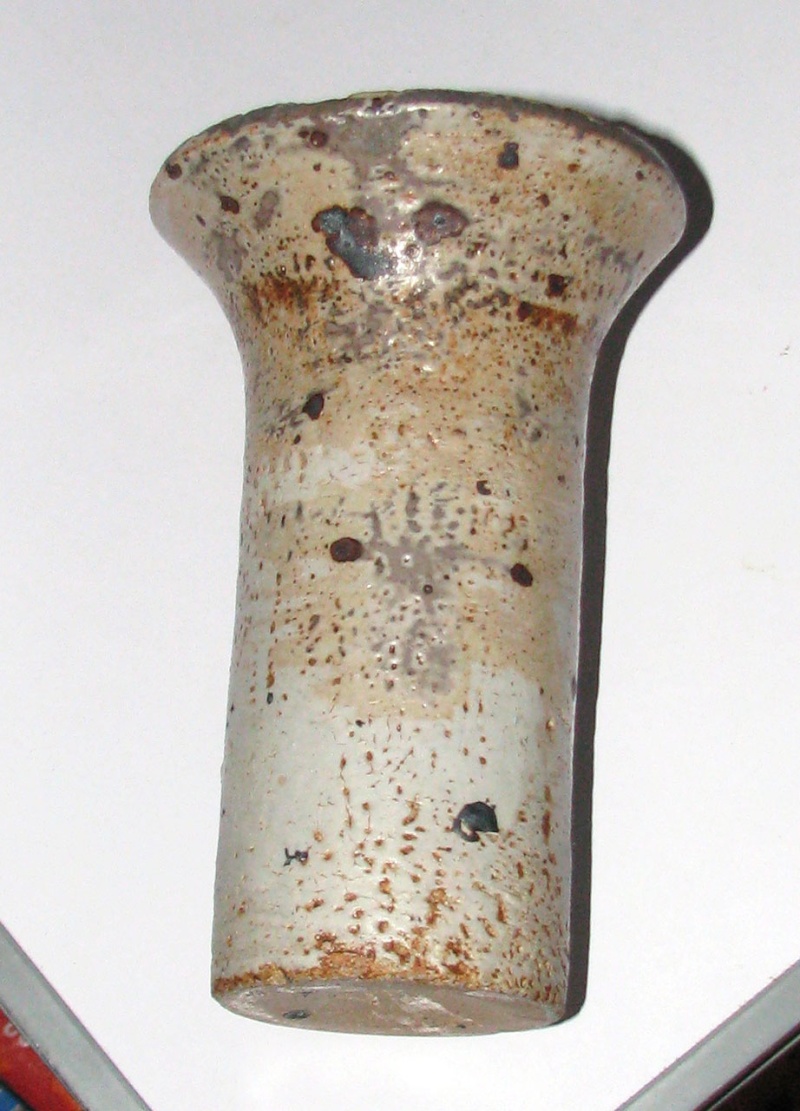 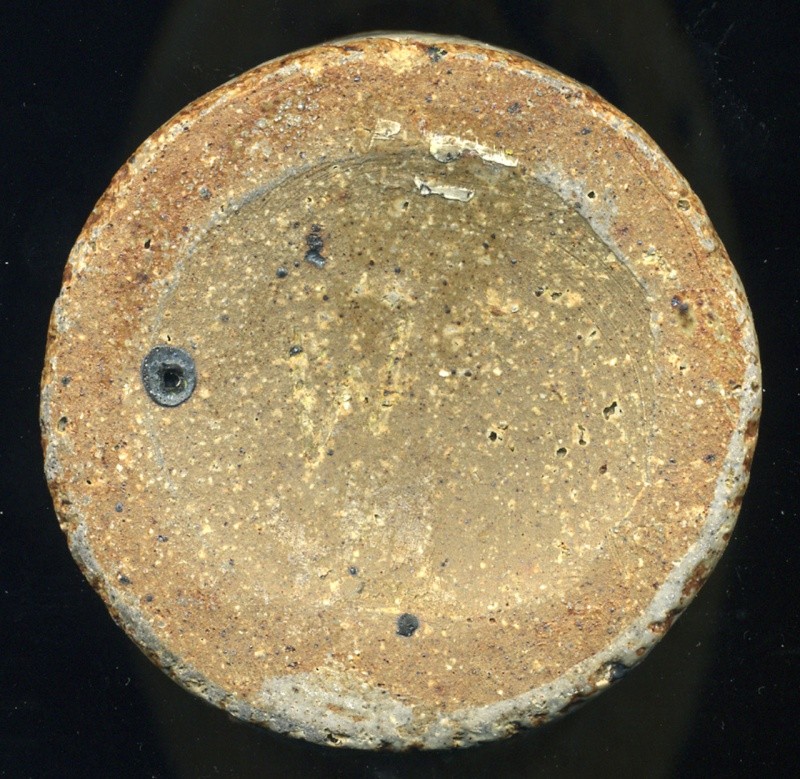 Without a mark the stoneware body, shape and the glazes look right for Alan. The mark does look faint and it might have been scratched on after firing (but without seeing "in the flesh" it isn't really possible to say).
_________________
Now you should know by now that Potty and I need to see your bottom - we're funny that way!

Two Alan Wallwork pieces from Alastair Hawtin's sale last year. I sold the first one to help pay for the other stuff I bought for my collection! 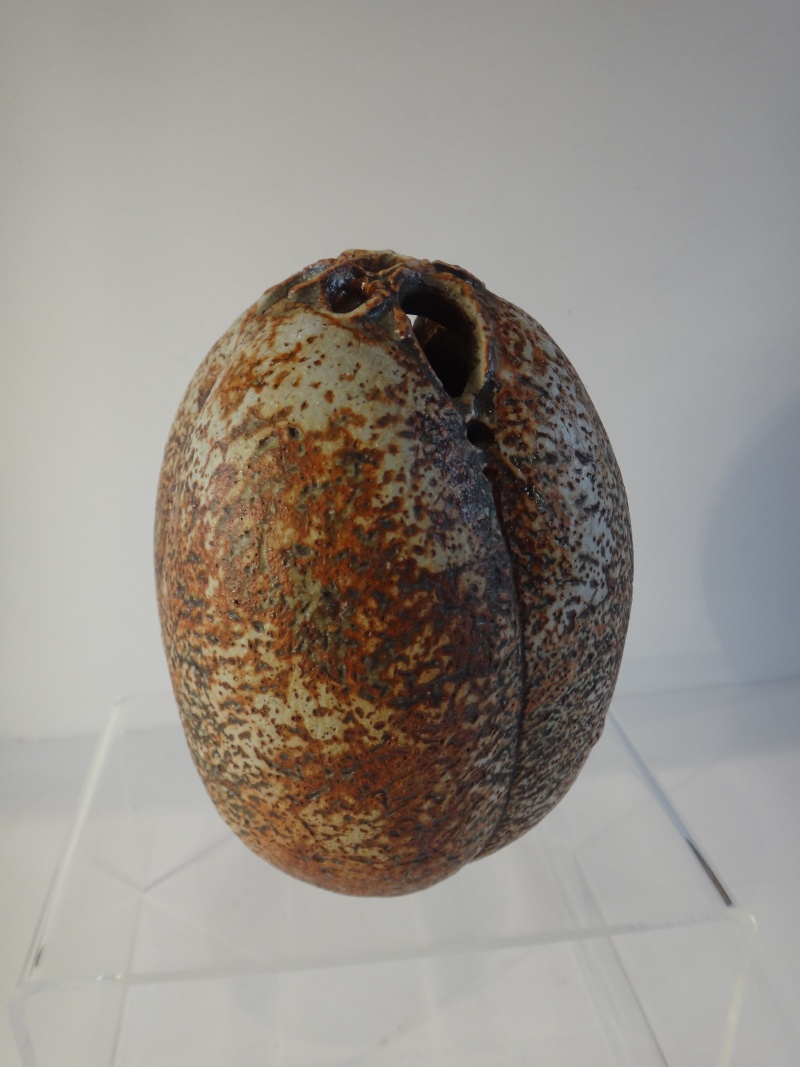 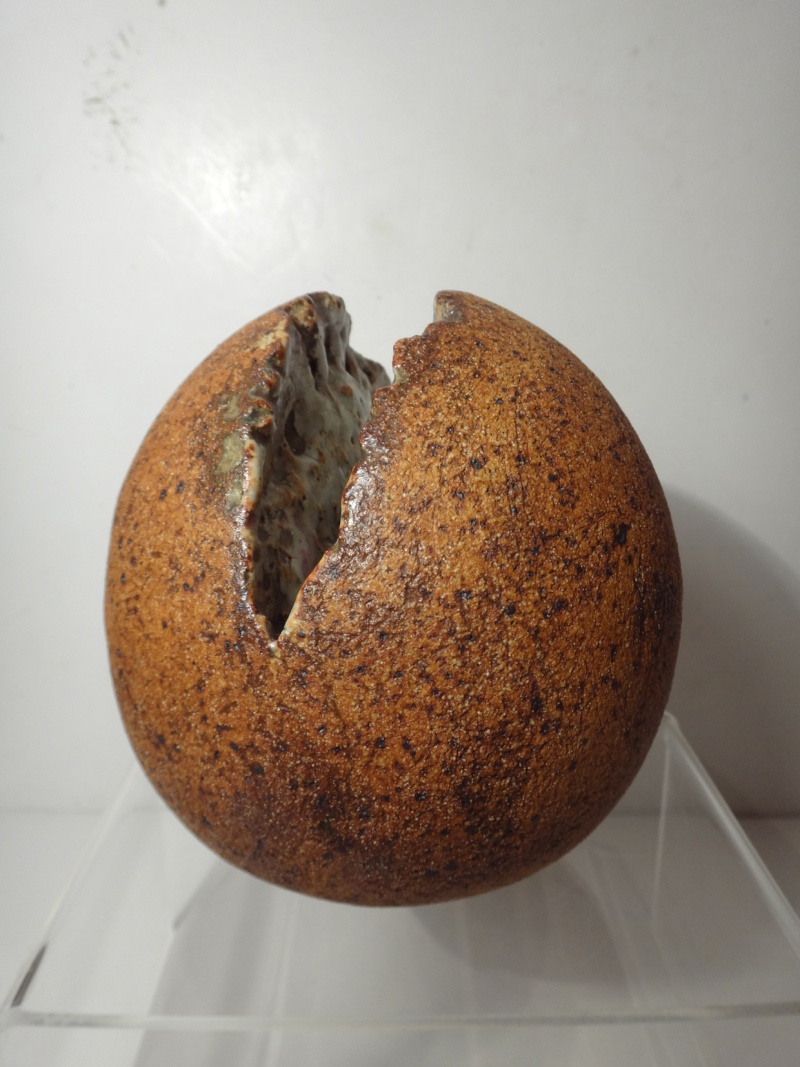 The pictures on the wall are by Dorrit Dekk, who was the designer of the "Land Traveller" exhibition, which was part of the 1951 Festival of Britain.
_________________
Now you should know by now that Potty and I need to see your bottom - we're funny that way!

I wonder if Mr Wallwork has a preference between his older pieces & the more modern works ?, ( pottery I'm on about) I suppose many factors would come into that question , I am biased and like both styles and forms and sometimes wonder what a combination of both would look like , maybe SP could relate a question to Alan , if indeed he had a preference in styles , the times they are a changin' I know

He has said that in the Sixties he was just churning out stuff in order to make money and the more recent stuff is more a labour of love but I am sure that if I quoted that at him he would deny it. I do think it is the closest to how he feels.

Certainly the more recent work takes far longer to produce, has a more instant appeal and commands higher prices but for me some of his work from the 1960s is Alan at his best.
_________________
Now you should know by now that Potty and I need to see your bottom - we're funny that way!

Yes , that's my point in a way , I can pick up an early Alan at a fair for £20 sometimes and I think , this is great , I like the roughness or whatever you want to call it , the labour of love stuff has its appeal but a more "worked on " look about it and yes that gets more dosh , but is it better ? MMMMmmm juries out on that one at times , that's what I meant about many factors coming into it , being younger and the 60's would have thrown up a different mind-set for a start , how could you know what you would produce later on in life . maturity ........? I dunno , It's like constables paintings , his 6 foot sketches are now more admired than the finished articles , it's like I sometimes say the artist /potter doesn't always know what their best work is , even if it's all good . 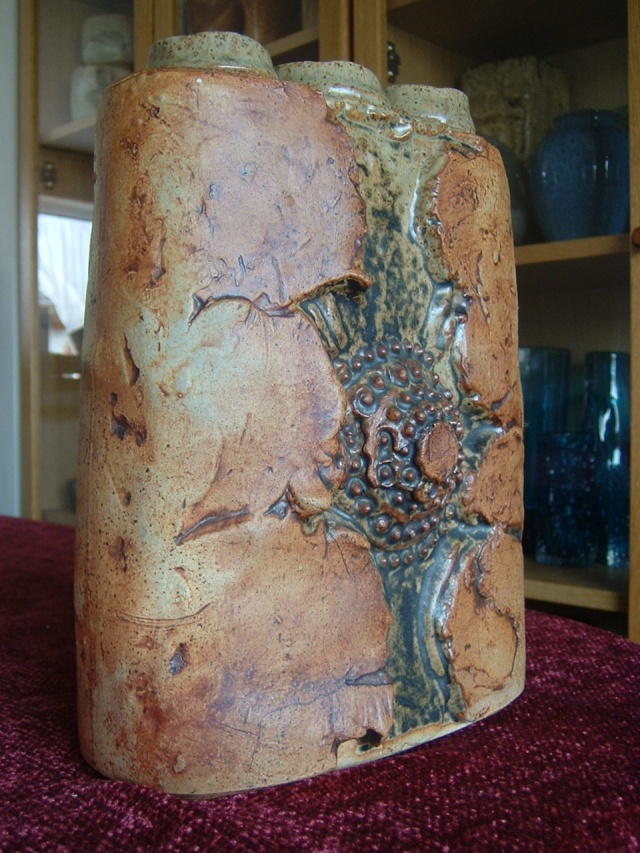 another hanbuilt date 1975 , also has what it takes imo .

philpot wrote: i suppose we should be grateful he did not go the way of his friend Bernard Rooke. From interesting to the kitsch end of shabby Chic

That is about it.

I can't think of any other potter who went from producing interesting, cutting edge stuff in the 1960s to 100% garbage thereafter. You have to admire them though, as he did get the kids to produce the rubbish.
_________________
Now you should know by now that Potty and I need to see your bottom - we're funny that way!

That is not what I said.

There are some potters, who I believe have produced crap throughout their careers, and I would never comment on their work.

I know that he fell out with the pottery establishment back then and I sometimes wonder if going to Suffolk and getting the kids to produce dross under his name was his way of getting his own back.
_________________
Now you should know by now that Potty and I need to see your bottom - we're funny that way!

Biased is a perfectly good description. I was just making the point that all of our opinions are biased. I think Potty might have been joking about liking the butterflies etc. but some people did, so they would think that we were all talking absolute rubbish.

My first piece of Alans work , but i am sure not the last . 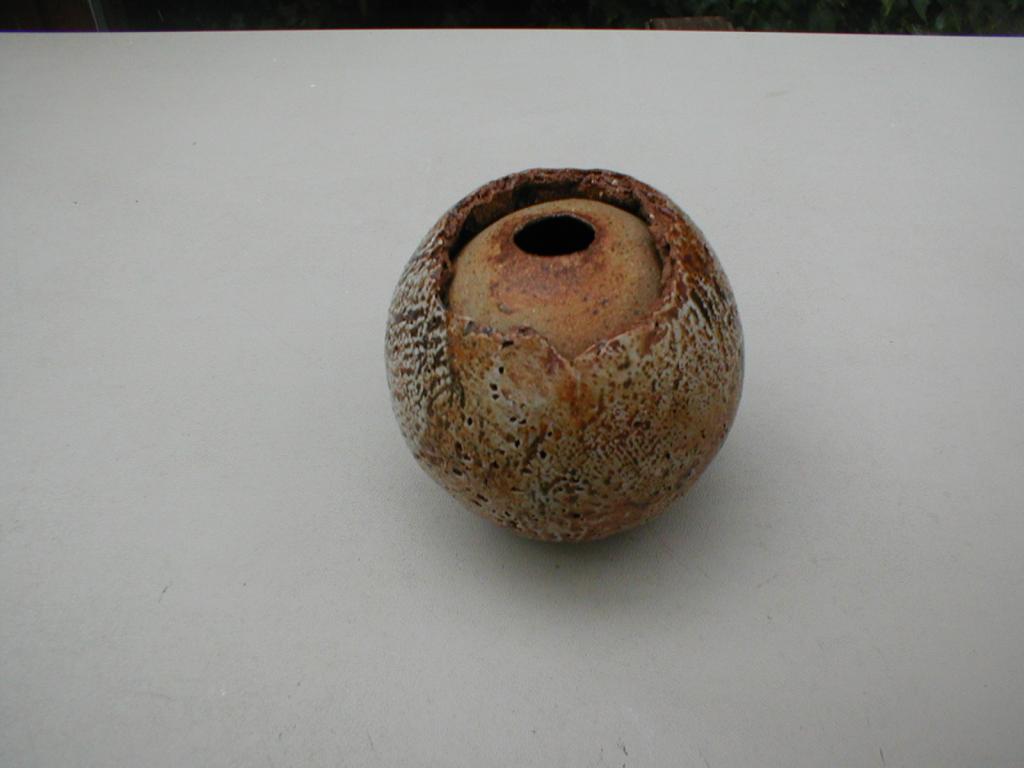 I really like it - what size is it Eclectic? And does the inner piece move or is it fixed?

S-P oxford ceramics who sell his pots have him in or about Lyme regis from 79 on after closing his premises in Marnhull or less i am reading it wrong , which is quite possible.

Alan moved to Marnhull in 1965 and that isn't that far from Lyme Regis. He stayed there until 1984 when he moved to Woodhouse Hill (nearer to Lyme Regis) and then to Uplyme in 1989. Alan had numerous exhibitions with me during his time at Uplyme so I have his telephone number from those days and it is the one on your pot.

If Oxford Ceramics have different information from the above it is incorrect.
_________________
Now you should know by now that Potty and I need to see your bottom - we're funny that way!

Going back through my images I came across this "relaxed" crescent 17.5 inches/44.5 cm maximum width. 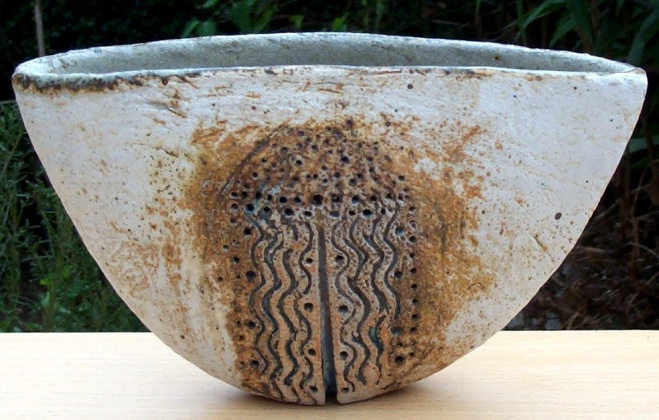