dantheman wrote:did that come open in the kiln or was it designed like that? Mine's the same and I love it

It may have changed slightly in the kiln but Alan would have worked it to be like that. 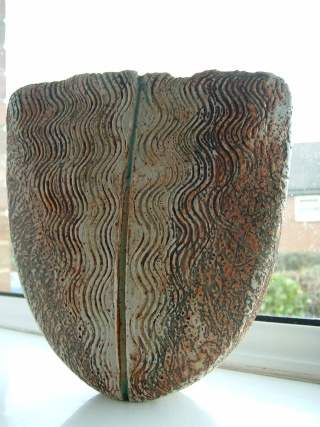 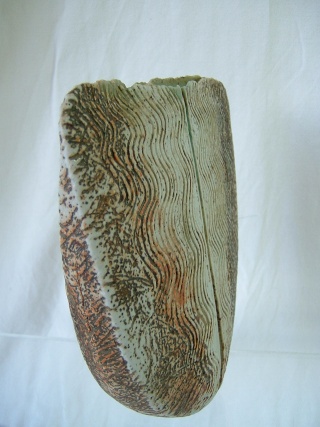 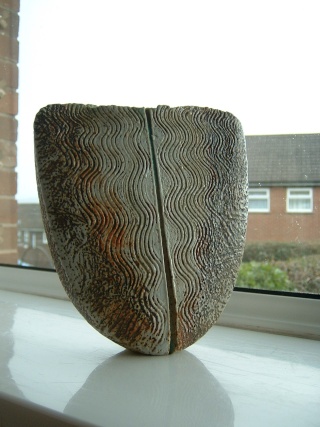 Alan Wallwork - Grooved Crescent Form 31 x 23cm
One of the stars of the 2009 Oxford Ceramics Exhibition
Appologies for quality of Image...update soon.

How do you date a piece of Wallwork?

Does anyone out there know how to date a piece of Alan Wallwork?

dantheman wrote:when was the changeover from the W mark to AW?

I'm afraid that there is not real answer to this and to the question of how to date Alan's work.

When Alan first started to make pottery in the late 1950s he did throw a quantity of work in the Bernard Leach/Oriental style and this had an impressed W seal mark (not incised like his more typical work from this period but an actual seal mark).

The incised W mark was used on most of his output from the late 1950s until some time in the late 1960s but he did produce large, generally special exhibition pieces, in the early 1960s with an incised AW and, on occasions, a date. I remember a tall organic pod form signed AW and dated 1964, which had been made and sold in an exhibition at a large Danish department store back then. Seeing it without the date, I would have thought that it had been made during the late 1970s from the style.

The incised W marked items tended to be made during the time that he employed assistants, such as Doug Jones and Louis Hudson. The assistants generally helped to prepare the clay and made things such as the plain cylinders before Alan would decorate but never made finished items themselves. Most of Alan's assistants were employed with the tile decoration from the late 1960s until that finished by the mid 1970s and I suspect that it was during the late 1960s when the incised AW began to be used for all of the production.

Dating AW items is difficult and can only be guesswork but please don't see an item in a past catalogue from a major London auction house and think that the date, say, 1982 is correct. I do not recall seeing anything dated correctly in any of these catalogues and will leave you to decide why this was allowed to happened. As a general rule the more intricate organic forms are generally later and some forms were only made for a relatively short period. However, this doesn't always help as there were a few new pots in the exhibition of his "Last British Pots" in 2004 that were newly glazed and finished but had been biscuit fired about 30 years before and got hidden in his rather crowded and chaotic studio.

Basically, age is really unimportant and it is if you like it or not that counts.

The large oval form is 39cm tall and the 3 split seedcase is 20cm tall.
More Indepth information about these and others soon. 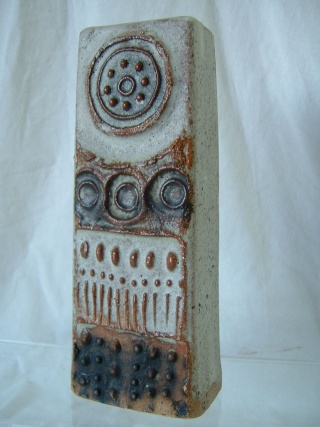 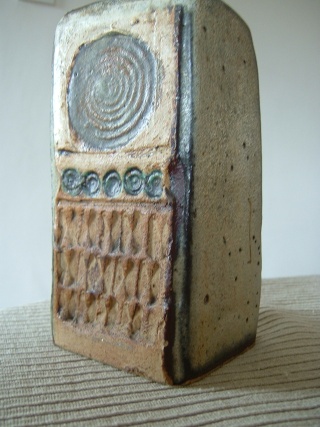 Are they AW? looks like lh? I had a fun email from Alan last year, he is a very pleasant chap with a good sense of humour. He moved back to the UK from France and was not looking forward to the good old British drizzle ... I tried to flatter him into writing a book, but he would have none of it. I wish he would as I despair over information being lost. He did like a laugh. He does write well IMHO - see this article http://www.uwic.ac.uk/icrc/issue012/articles/12.htm

I have heard the article in your link from the man himself and knew that he had written it down but had no idea that it had been published so thanks for that.

In a different thread on here we have been talking about things that get written then becoming fact when they are perhaps only one side of a story - something which Alan cares about so it is good that this piece at least is there for all to see.
_________________
Now you should know by now that Potty and I need to see your bottom - we're funny that way! 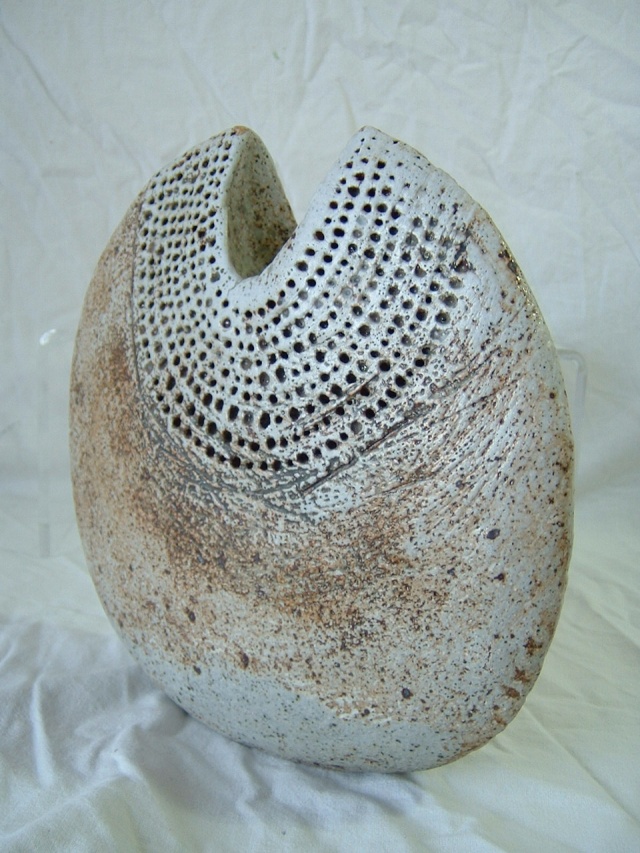 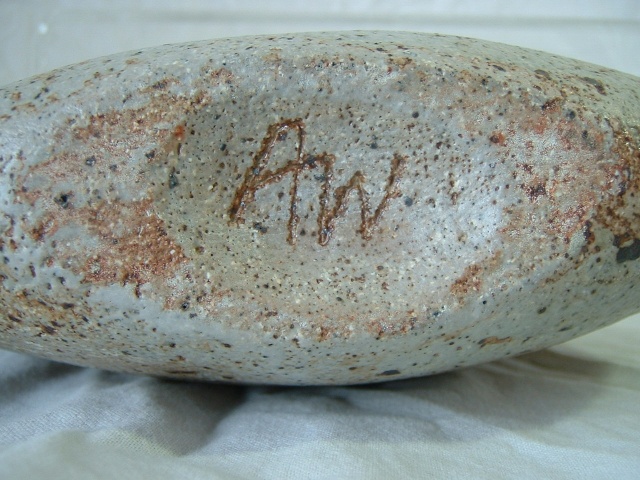 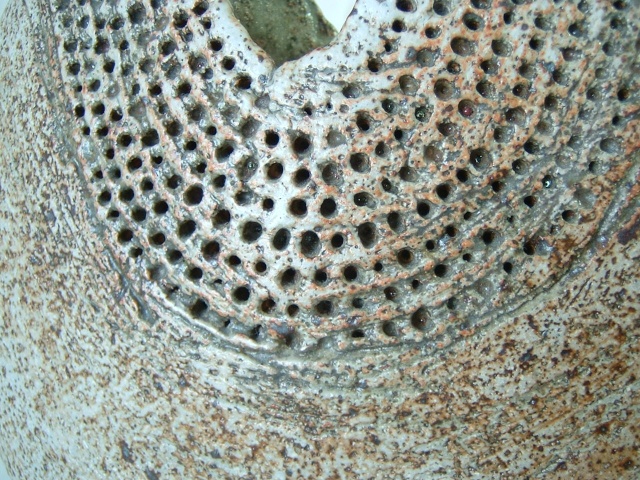 this one is just under 8" High & Across 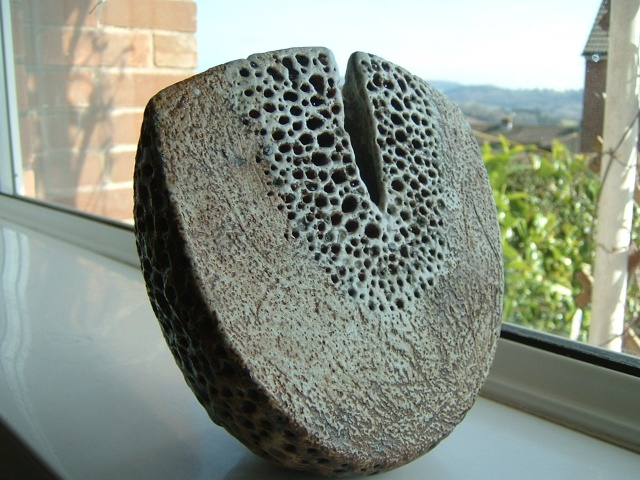 Is this a Cornish studio vase?

Hi,
Could anyone help identify this vase which I recently bought at a car boot? It looks like Cornish studio to me but I can't find anything on the marks tothe base, which look like a stamped S and a hand incised M.
Thanks!

I've found a photo of the base of a Wallwork vase on the net which does have a W like on mine and also a hand incised (not stamped) S - but I can't find any explanation of what the S might stand for.

I spoke to Alan Wallwork this morning and he said that for around 6 months he got the assistant, who colied the cylinder, to put their mark on the bottom as well and the S is for Sue. He didn't tell me her surname.

As it states elsewhere on this forum, the majority of his 1960s pots were coiled around a "former", which dictated the shape of the cylinder and this was done by assistants. Alan did the decoration and then the cylinder was glazed and fired.