I’ve never had any Abuja pieces but those I have seen have been marked.
I will check out Abuja decoration and see what I come up with.
Thanks, Naomi.

Great - I can see the Abuja influences. I love the decoration. And it means I’ve still got my first Abuja find to look forward to.
Cheers.

Yet another piece from my loft.
A 4" high squared pot and lid with sgrafitto panels on all sides. It looks very Japanese influenced to me. Unfortunately unsigned but I'm hoping that somebody might recognise the style.
Ignore the price sticker, it only cost me a tenth of that at a boot sale many years ago. 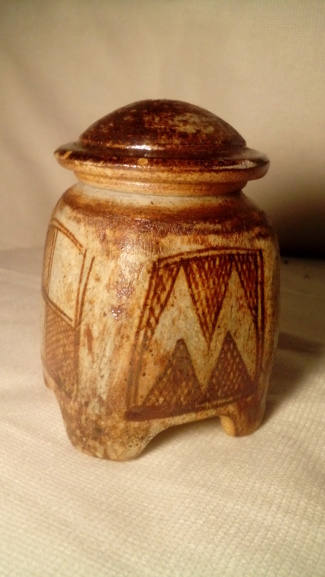 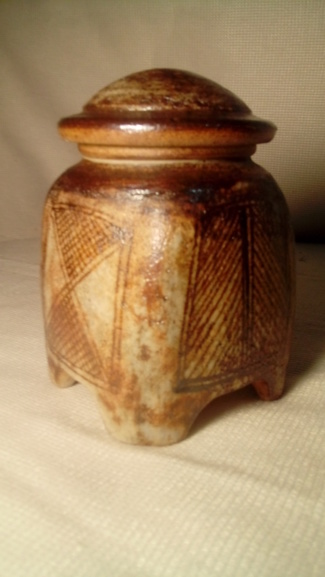 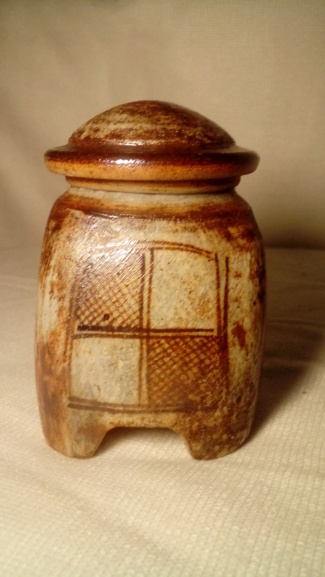 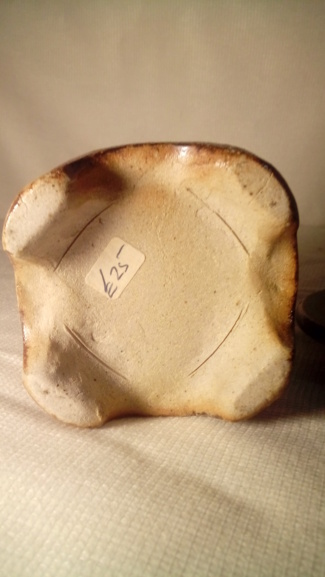 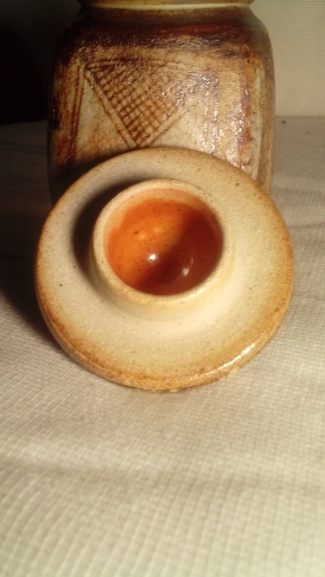 It's more African influenced than Japanese and it is by Chris Lewis, who still works at the South Heighton pottery near Newhaven. He went through a period of many years when he didn't mark his work but he marks it now.
_________________
Now you should know by now that Potty and I need to see your bottom - we're funny that way!

Thanks, S-P, much appreciated.
I can see the African influence now you've mentioned it. The cross-hatching in the panels is often seen carved into the handles of African tribal wooden tools and weapons; it allows for a better grip when the hands are wet with sweat - or blood, in the case of weapons. The same thing is also a common feature on war clubs and such-like from the Pacific Islands.

Chris Lewis worked with the late Ursula Mommens for many years at South Heighton pottery. She spent time with Michael Cardew, and is a fascinating potter and person in her own right. There is probably some influence from her.

Chris has a large collection of art and artefacts not only from Africa but also from South America, with the later influence seen in his more recent work. The price label on the bottom of this pot is in Chris's handwriting.

I remember Chris telling me that when Ursula was alive, David Attenborough invited her over to Richmond to see his pot collection, and he jumped at the chance to drive her over there, as he wanted to see the tribal art that Attenborough collects as well.
_________________
Now you should know by now that Potty and I need to see your bottom - we're funny that way!

I'm glad I didn't remove that price sticker!
Having seen a few of Attenborough's tribal art pieces on tv when he was filmed at home, I wouldn't pass up the chance to look at the entire collection, too. I know that a lot was given to him in person by tribal people when he was filming among them, starting with his Zoo Quest series in the 1960s. I'd say that the stories behind each piece would be fascinating, too. Not a bad idea for a book, I suppose. Photographs of each piece along with the stories of when, who, and so-on of how he came by them.

I would suggest that Ursula did not influence Chris pots that much.

I know Chris was interested in Michael Cardew's work from early on, as was Ursula, but Chris travelled to West Africa first before he started potting seriously where I think he first met Michael OBrien (no apostrophe) at the Abuja Pottery in Nigeria, which had been started by Cardew and taken over by OBrien when Cardew left.

Chris joined Ursula at South Heighton when she put the word around that she wanted a young potter to share her space and at the time Chris was sharing with Michael OBrien at Wrecclesham and Michael, being a cousin of Ursula, put in a good word.

So I would suggest that both Chris & Ursula were influenced to a degree by Michael Cardew but I am sure they both pick up things from each other, as they shared the pottery and the farmhouse on the site, which was split into two when Ursula was alive.

I don't suppose that Michael o'Brian is the same o'Brian who worked in Rhos Goch? I posted a small bottle kiln-shaped pot of his recently.
https://www.20thcenturyforum.com/t26061-o-brian-rhos-goch-wales

Spelt Michael O’Brien. He was at Abuja so unlikely to be the same person. He’s related to Anthony OBrien (no apostrophe) who pots in Ireland
_________________
Carrot cake is just fake cake

I forgot to mention that it was around 2000 that Chris began to make such pots, so it does date it to around that time, as Chris began to mark his work a few years later.
_________________
Now you should know by now that Potty and I need to see your bottom - we're funny that way! 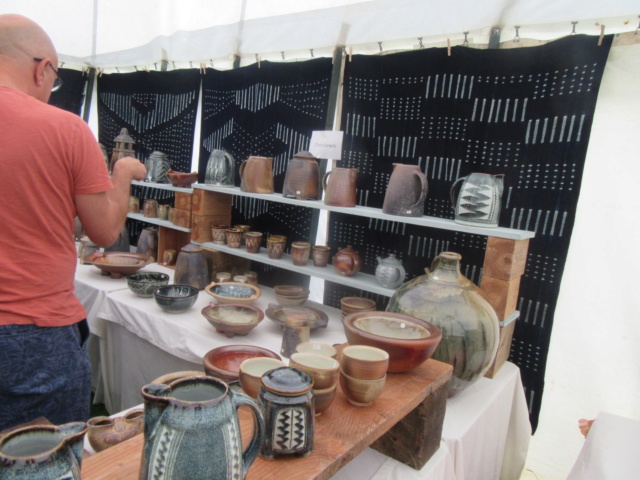