I read Laurie has or had a studio up in Cumbria, but I can't find any details.

Does anyone know if he is still active, and when these two pieces of stoneware might have been made... 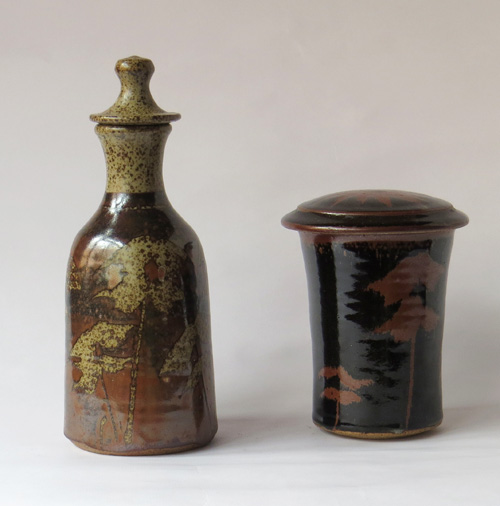 Here's the mark on the bottle - the one on the lidded jar has been partially glazed over... 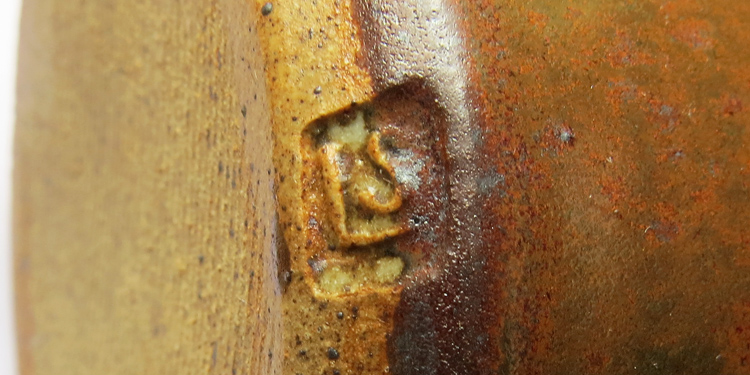 Circa 1980 I sold Laurie's pots in the Guild of Lakeland Craftsmen summer shop. also I owned a tea-set of his for nearly 30 years. In 1980 I oversaw the publication of the GLC Directory, (2nd ed.) and there was a page for Laurie, with picture, which I could upload for you. In the 1980s Laurie became a Craft Officer for Arts North, the organisation was based in Newcastle but covered Cumbria too, and I remember him saying that he was not finding it possible to make pots and do that job at the same time. As there has been no continuing canon of his work, I presume that he never went back to it.
The GLC Directory page states:
" Born in Devon in 1947 and worked at several different jobs before deciding to become a potter. Trained at Harrow School of Art 1971-73 and worked for Danny Killick and Bryan Newman. Spent six months working at an industrial pottery in Honiton, Devon.
In 1974 moved north and set up a pottery with the aid of a Crafts Advisory Council grant. Makes reduced domestic stoneware pottery and some individual porcelain using a seventy cubic foot oil-fired kiln. The glazes are granite based and the decoration is brushwork and wax-resist.
The aim is to produce a wide range of pots which are aesthetically pleasing as well as functional, and which reflect something of the landscape in which they are produced. Has exhibited at Wolf House Gallery, Silverdale, and pots are sold in craftshops in the Lake District, the North East and Yorkshire." His pottery at the time was Crag Hall Pottery, Millom.
I can recognise some but not all of Laurie's work; some of it shouts loudly that it is his. There was quite an interest in stoneware at the time and I see pieces attributed to others, or presented as mystery pots. Around 1980 at least he had a consistent, preferred range of glazes and similarly a small, preferred range of brushed decorations. The pots with twiddly handles, where the clay loops back upon itself, they are typically LS, as is the brush decoration showing what I can only call a blob with 3 tails leading to the right. He had another pattern called 'mayfly' which was a vertical arrangement of brush strokes that was a bit mushroom-like, but with extra vertical strokes. That was on my tea-set, I wish I still had it!

The lidded jar above is Laurie's, I remember those from the 1980s, and it has one of his regular brush-mark styles. I don't recall the little stoppered bottle but the brushwork looks like Laurie's - the potter's mark would clinch it. The teapot and the lidded jar with decorated top above are both also typical of his work.

I've been told this is also by Laurie Short - 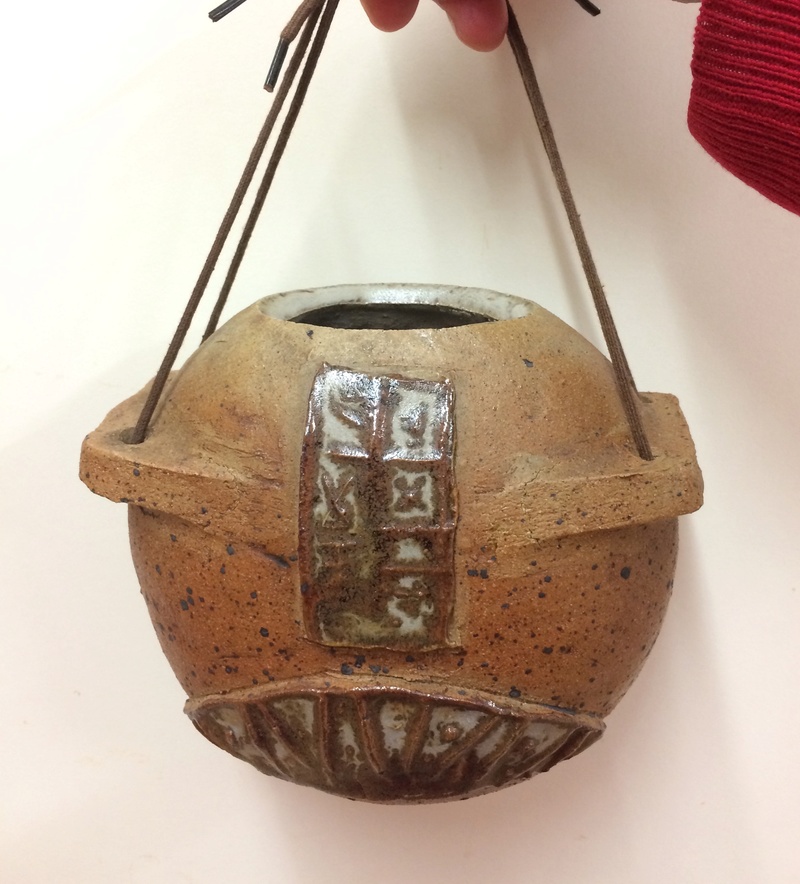 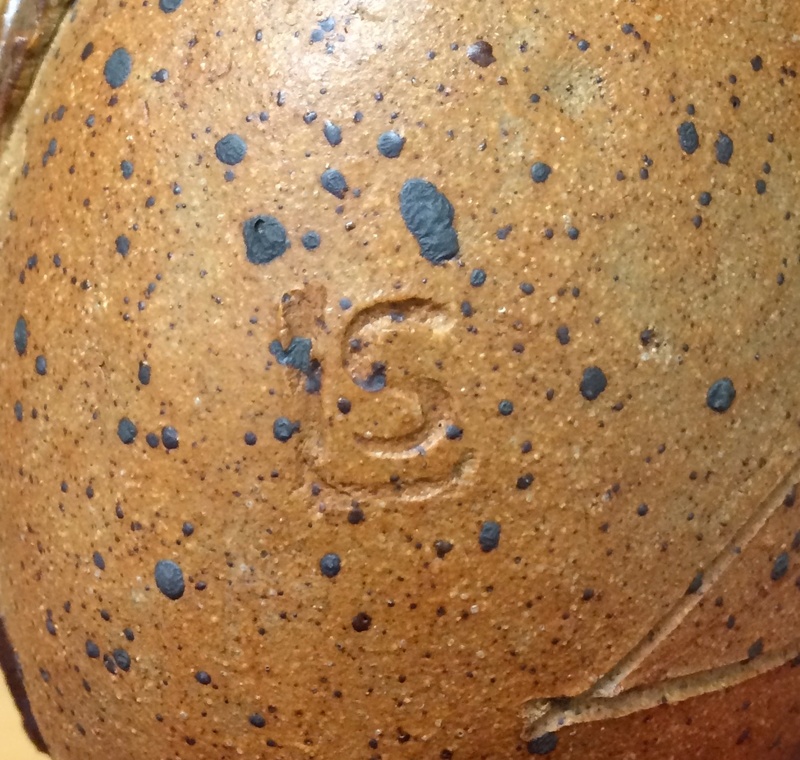 I can only recognise Laurie's stoneware work from the 1970s and 80s - I could not, for instance, recognise any of his porcelain work. If LS resumed making pots and did so using completely different shapes, styles, clay, glaze and decoration, then that could account for it - and sometimes that could happen. couldn't it? The mark certainly looks like his earlier mark. Does it look like any other pots of Laurie's that you have seen, please, NaomiM? ? I have asked the Northern Potters Association if they have any more information about Laurie after 1990 - I know he was a member.

I came across a couple of pots attributed to Laurie Short which marched this applied and stamped decoration. I guess they must have been made later in his career.
_________________
Just my personal opinion, take it or leave it.

You have discovered late period Laurie Short! You must be right - perhaps after a bit of a fallow period it would not be such a surprise for an artist-craftsman to resume with different avenues of creative exploration. I think the pot you show above is a most remarkable object, its concept just catches at your eyes and mind, and the execution is wonderfully skilful. Where did you find these (later?) pots? Is there a whole raft of LS work out there that I don't know about? Many thanks for letting us see this, I'd love to see more. If I find out anything further about LS I will post it here.

The flask was found in a dark corner of Hungerford Arcade, so I'm afraid I can't tell you how it came to be there.
These are two others I found online with the same mark - 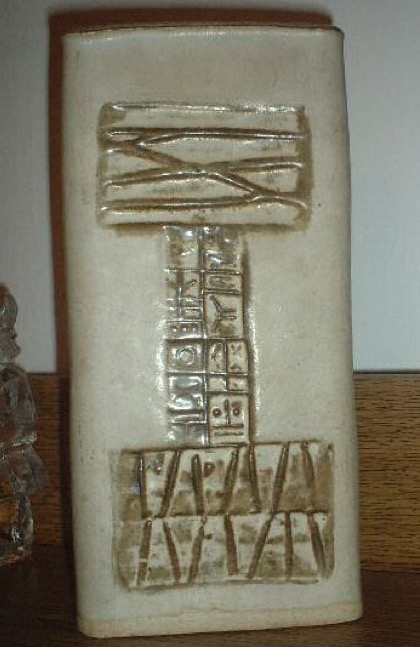 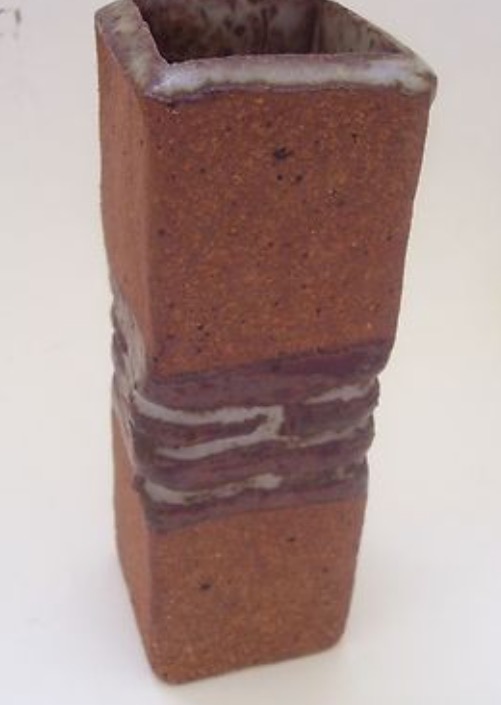 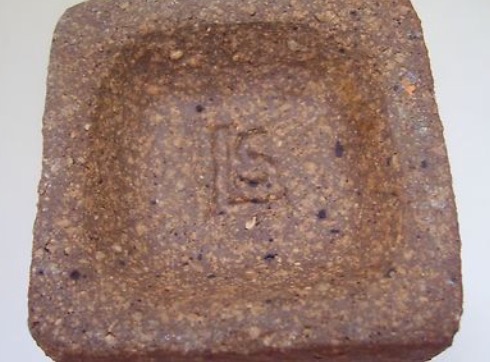 The top one is on the Ceramike website which used to do studio pottery IDs
This is what they said about it:

Mark Nuttall - Slab vase is simon leach quite early I Think
James - Its not one of Simon's pots, despite the seal looking very similar and totally understandable as to why you might think that. It might be a potter called Len Stevens who is always being listed as Simon Leach on eBay.
Pat - Must be my eyes, because my book has a mark quite different to this for Len Stevens.
Peter Day - It's by Laurie Short, a Cumbrian potter. I've seen several of these pieces and once got into trouble with Simon Leach for listing one as his on eBay. He's not in any of the books. Simon Leach has himself suggested Len Stevens, but he only makes ocarinas.

I can't find any examples of Len Stevens' pottery, but maybe the flask shape does resemble an ocarina?
_________________
Just my personal opinion, take it or leave it.