Fabbrini Frederick was born in Arezzo in 1928.
After studying architecture, suspended before graduation, he experiences at several ceramic factories in Sesto Fiorentino, Montelupo and at the Laboratory of Marcello Fantoni in Florence.
In 1958 he opened a workshop on their own, called "Pottery Fabbrini," being Castelbonsi 10 in San Casciano, near Florence, with his wife Tina Aginari, and invites him to work with Nanni Valentini and Franco Bucci.
From 1969 to 1973 worked as a designer with the factory "Villeroy & Boch", for which he created, among other things, furnishing the table "Bomb", now preserved at the Museum of Modern Art in New York, sharing 'experience with Franco Bucci.
From 1973 onwards back to work in his laboratory in San Casciano, where he produced a small series of ceramics, often inspired by the magical world of fairy tales, and use of ceramics and furniture, forged on the wheel, stoneware clay for tender.
In 1993 Frederick Fabbrini closes its activities but continues to deal with working with ceramics and Brunella Bruno Gambone Sciulli.
During his career he has exhibited several times at exhibitions in Faenza, Gubbio and Ostend and Eighties his works are exhibited in the "Laboratorio Pesaro" by Franco Bucci in Pesaro Road 145 to Romagna.
Federico Fabbrini died in Florence in 2007. 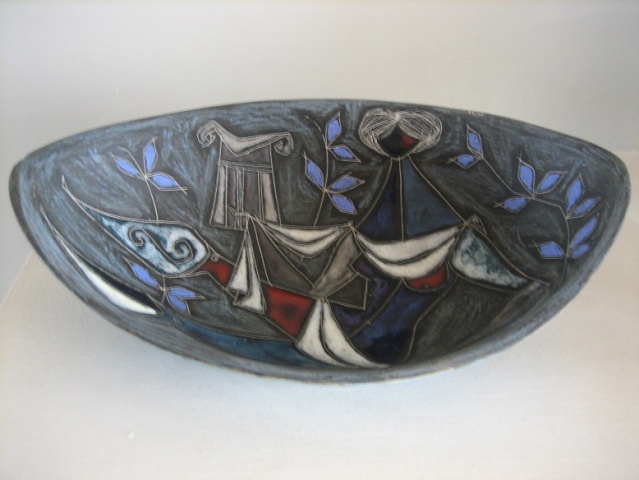 Hey guys. Cheers for starting a thread. Will get a photo of the signature asap. In the meantime, here's another couple of pieces...

I parted with this on eBay a month or so ago. And I'm regretting it...

And so you should

Can't keep everything, Brinley - as much as I wish I could. You know H and his OCD!!!

Liked the other one better....however if you ever want somebody to look after your stuff !!

Get your purse out!!

Nobody has said that to me for a long time