Can't quite make out the seal mark clearly but hopefully someone can!

There does appear to be a potter that is first mentioned in Godden who is only known as A. Lewis-Evans. He began potting a few miles from where I currently live - in Welling (now London Borough of Bexley) from 1952 to 1957. It says that he moved to the Stoney Down Pottery in Dorset and potted there from 1957. Godden's Pottery and Porcelain Marks was originally published in 1964 so one assumes that he was potting at least into the early 1960s. This information was then used in the British Studio Potters' Marks book with no additional information.

The mark on your tankard looks like it could be his mark and the style seems to fit but I have not seen anything that can absolutely be pinned down to him so can't be certain.
_________________
Now you should know by now that Potty and I need to see your bottom - we're funny that way!

Adrian Lewis-Evans as SP has said.

I did find that he used to teach pottery, "is a real gentleman" and appears to have been around and possibly still working in 2010.

Why not "travel west" to Rushall Lane in Lytchett Matravers near Poole in search of the man?
_________________
Now you should know by now that Potty and I need to see your bottom - we're funny that way! 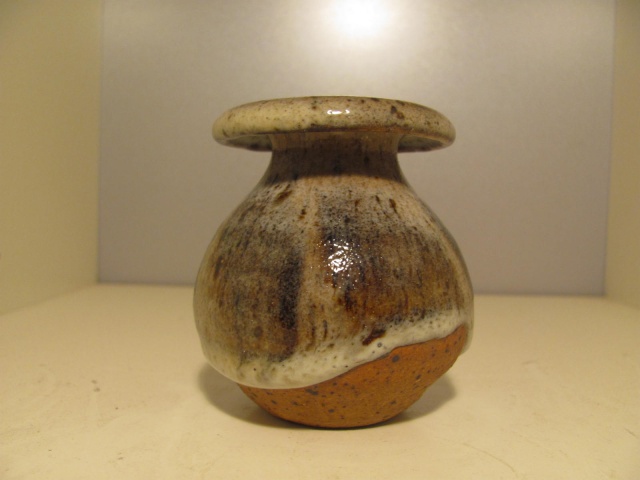 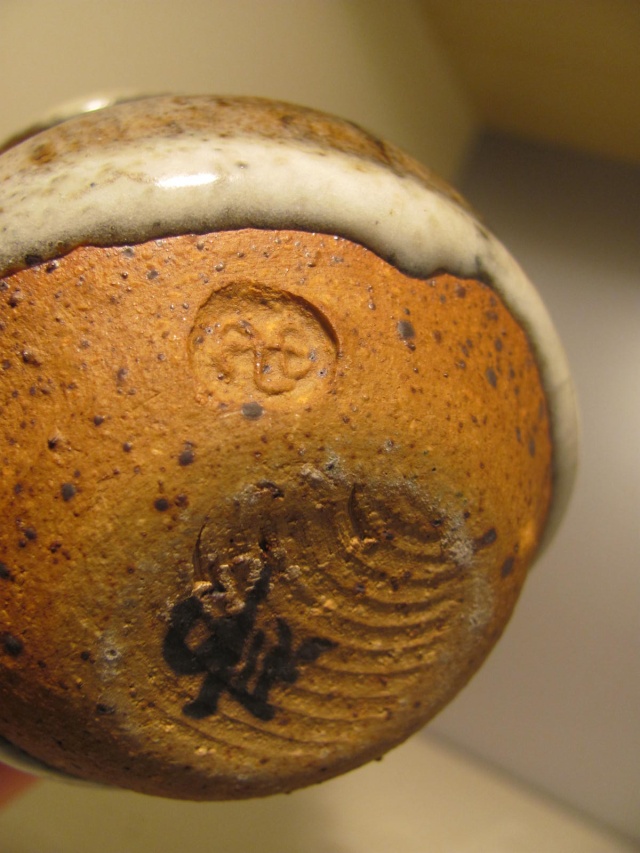 That's a lovely glaze Davee. Here's the example I have in my collection. Again, stamped and ink marked. I wondered if the ink mark referred to the glaze. 9.6cm (height). I'd love to see one of the 'Dorset Owl' cider flagons mentioned in BSPM. 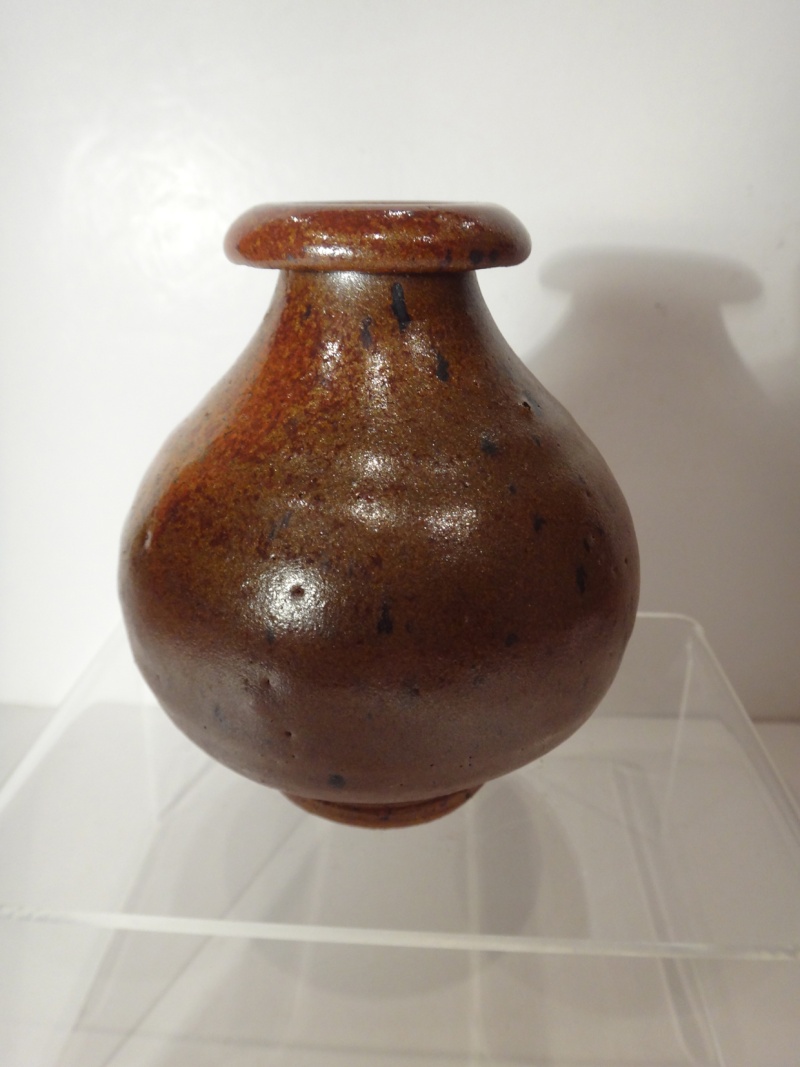 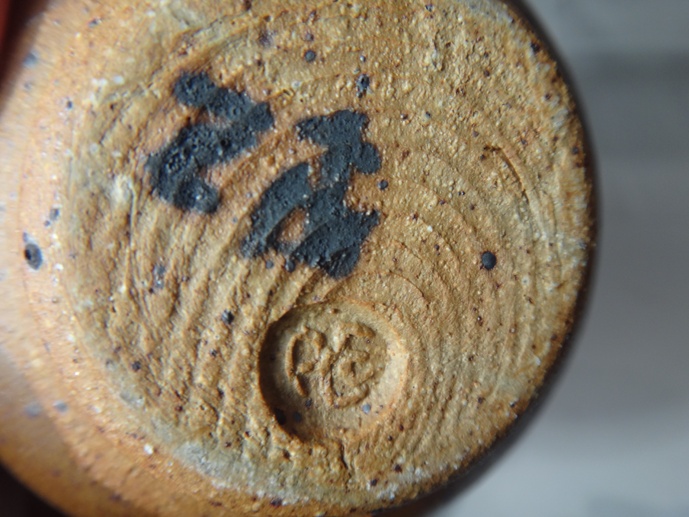 Here's a pic of one of his Dorset Owls that I had a year or two ago.

A Lewis-Evans Stoney Down Pottery, Dorset I think 1957 onwards?

It's a 'Dorset Owl' jug or costrel.

The collective name for Dorset pottery of this type is Verwood Pottery, which has a very long history (18th century to present), but this seems to be a 20th century revival of the traditional form. I'll keep digging to see who this particular potter was.

A Dorset Owl is a flagon for cider or beer that farmworkers used to carry with them from about 17th C. onwards.

Adrian Lewis-Evans trained at Camberwell Art College and then set up a pottery in Lytchett Matravers in 1958. He also taught ceramics at Bournemouth & Poole College of Art (from a book I have "Discover Dorset Pottery")

The comments in 20th.Century Forum are fascinating and, yes, A.L-E. is still gently potting in Lytchett Matravers, Dorset.

For the record I was born, August 2nd.1927 and after an engineering apprenticeship I changed careers and began pottery making in1952. I taught myself to throw and spent a year at Camberwell with incisive guidance from Norah Braden. David Leach also helped me to pursue the Leach tradition and as well as wheels and kilns I made the steelworks for his and Colin Pearson's climbing kiln at The Friars, Aylesford.

In Dorset, from January 1958 I taught a day a week at Bournemouth College pottery with David Ballantyne and that master handbuilder of large pots, Peter Stoodley.

Of the thousands of pots made in 60 years perhaps the most definitive was my stoneware interpretation of the 'Dorset Owl' cider flagon - globular with a narrow neck and pierced ears for leather thongs. Many of these went to Plimoth Plantation, Massachusetts where originals were taken in the 1600's.

I just wish that instead of only 15 years left if I'm lucky, I could have hundreds to continue to pursue the endless fascination of glaze making and the joys of results on pots.

I really like the way the glaze interacts with the shape and the texture of  the body to create all kind of contrasts and events on this little coffee mug: 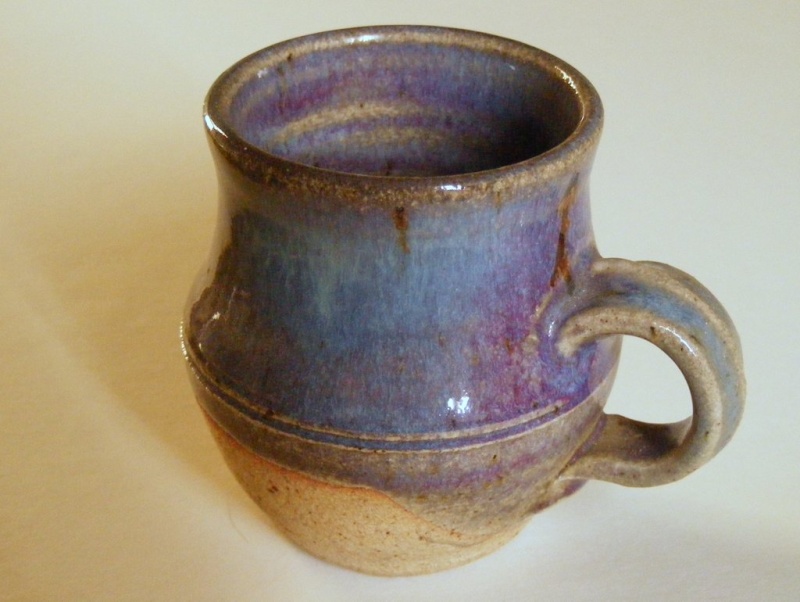 Hopefully Adrian Lewis-Evans can advise who Lloyd is ?!
Thank you 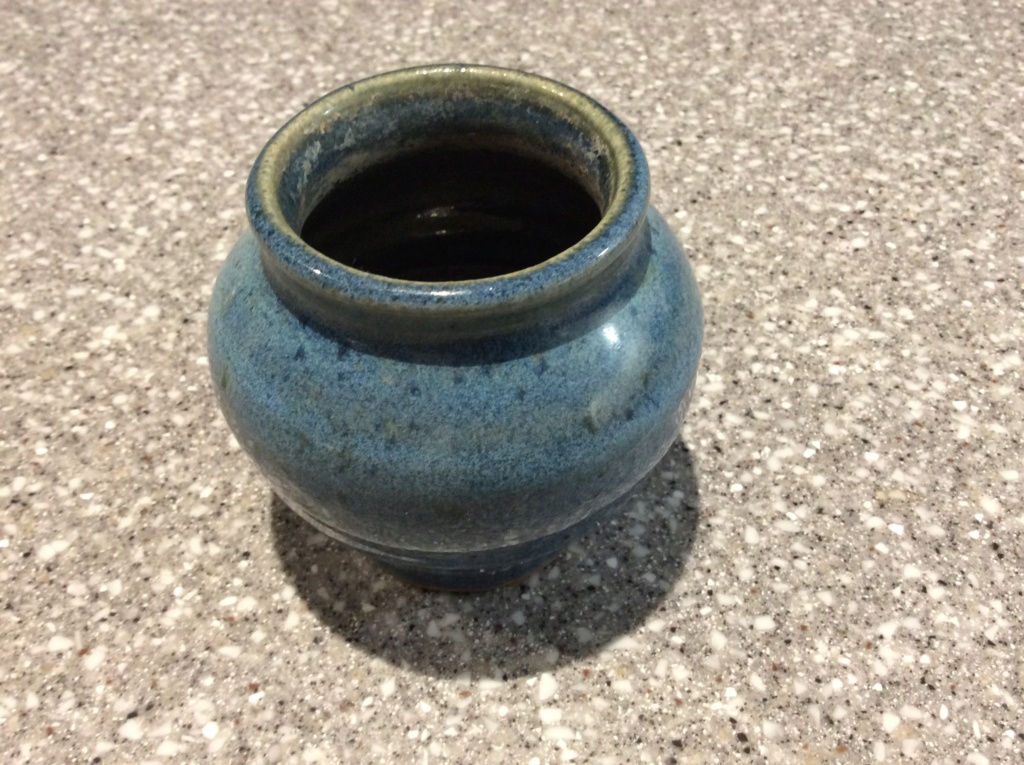 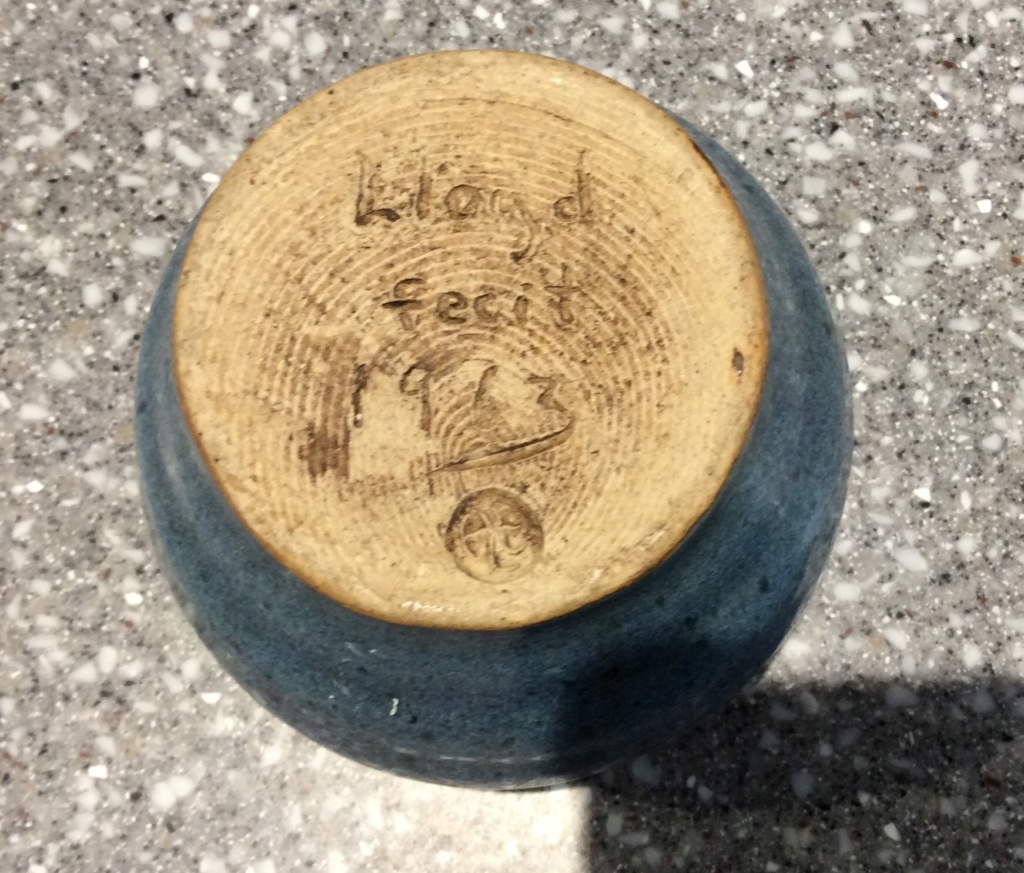 A recent note from his son. Seems the handwritten letters of numbers on the bases of some of the pots were his own cypher for his glazes

It is with sadness that my dear father passed away on Sunday night to be with Mum.
Dad was 93 and had enjoyed a potting career that spanned many years. In 1958 he moved to Lytchett Matravers Dorset and set up Stoney Down Pottery. He successfully ran his pottery until his retirement just a few years ago.
He also was a tutor at Bournemouth college of art, part time and worked alongside Peter Stoodley and David Ballantyne. This supplemented his home pottery income.
He dug much of his own clay and his passion was glazes. So many years of glaze tests, resulting in some wonderful results.
He was also known for his knowledge of kiln design and building, often helping new potters with advice and hands on help.
Dad was tutored at Camberwell art college by Norah Braden.
I often told him how proud I was of his pots and it gives me solace to know that he has left his mark, with his pots, all over the world.
Bless you Dad. 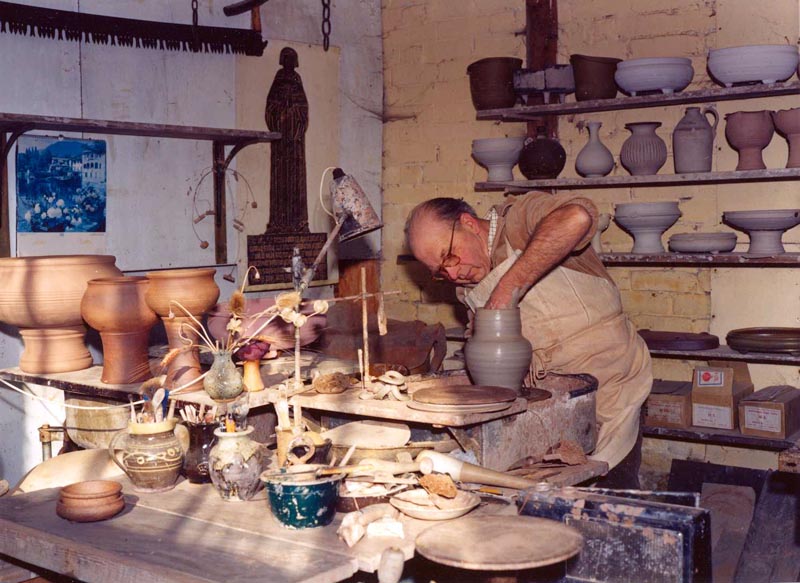 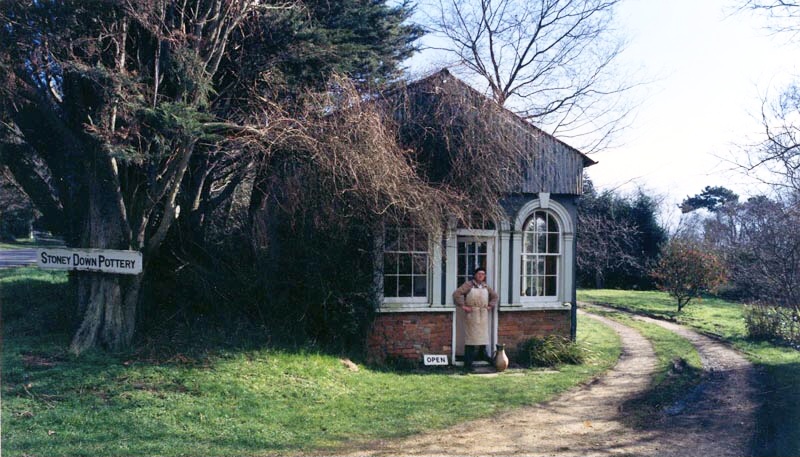 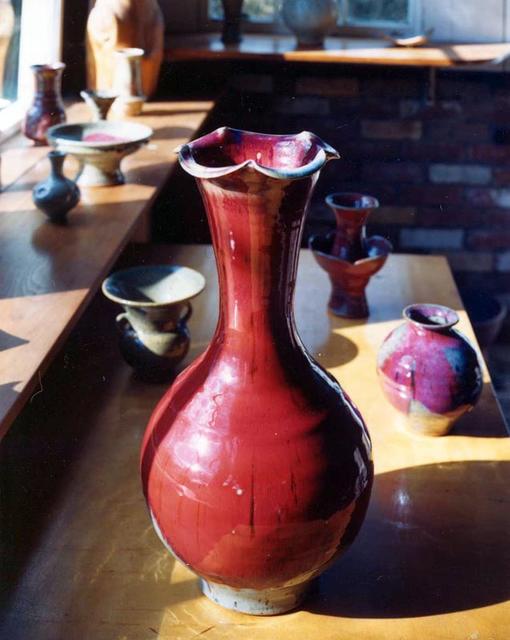 He was a very good potter. It seems like a true passing of the old guard in recent years.