I need your assistance if possible. My forte is Italian pottery but I've come to you because I'm looking for information pertaining to the American industrial designer Ed E. Langbein. In addition to being a designer he produced his own lines of ceramic and glass decorative items and tableware through his company, Edward E. Langbein Giftware in Brooklyn, NY. He operated between the late 1930's and late 50's or early 60's. He did no manufacturing of his own but had his designs produced in Europe, mostly Italy and West Germany. Any information would be greatly appreciated.
Thank you
Walter Del Pellegrino

I've never heard of Edward E Langbein before so did a Google (as I'm sure you've already done Walter) however I came across this set of coconut dishes by Langbein - they're gorgeous so thought I'd post them up here in your thread. It's useful to see the basemarks as well.

The reason I raised the question is because I had never heard the name before seeing an example of his work in another forum. There seems to be no information about him on the internet, yet he must have been of some renown during the 1950’s. Why else would the Museum of Modern Art (MOMA) in New York, as well as several other museums, maintain examples of his work in their collection?
His acclaim in the 1950’s must have been widespread and his designs well respected by the public. Why else would he have been selected to be a part of the 1957 exhibit at the Brooklyn Museum in NYC entitled “Table Settings: The Old With The New”? In this exhibit four rooms were set up, each displaying the designs of four prominent designers of the time. In addition to the Edward Langbein room the exhibit included the design rooms of Russel Wright, Raymond Loewy and Eva Zeisel.
Wright, Loewy and Zeisel are icons of Mid-Century Modern design. But what of Langbein? The Brooklyn Museum certainly deemed him worthy of a place on this hero’s podium in the 1950’s. Why is he a forgotten name today?
I think the question is worthy of investigation. If Langbein’s designs have earned a place in several museum collections I would image his work should be collectible today but that does not seem to be the case. I hope that someone within the MCM collecting community might take on the challenge and re-discover the story of Edward Langbein.
Walter

I have a dish of him:

But no further information alas.

I have heard from Mr. Langbein's son and grandson. I was able to contact them through a college alumni organization. In the next few weeks I should have some information available. Mr Langbein's son, Ed Langbein, jr, doesn't feel comfortable using e-mail communications so he will be sending me information via the post office. I can't wait to see what he sends me in terms of a bio and company history.
Walter 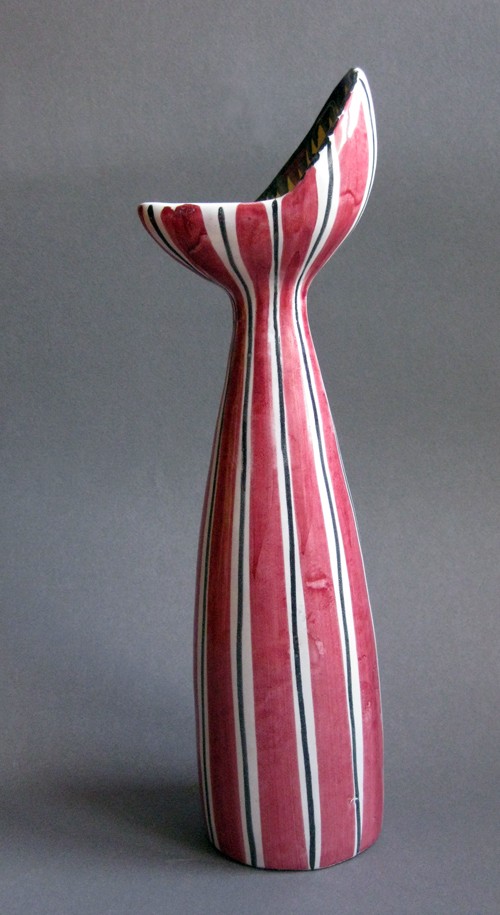 Details of the face and base. 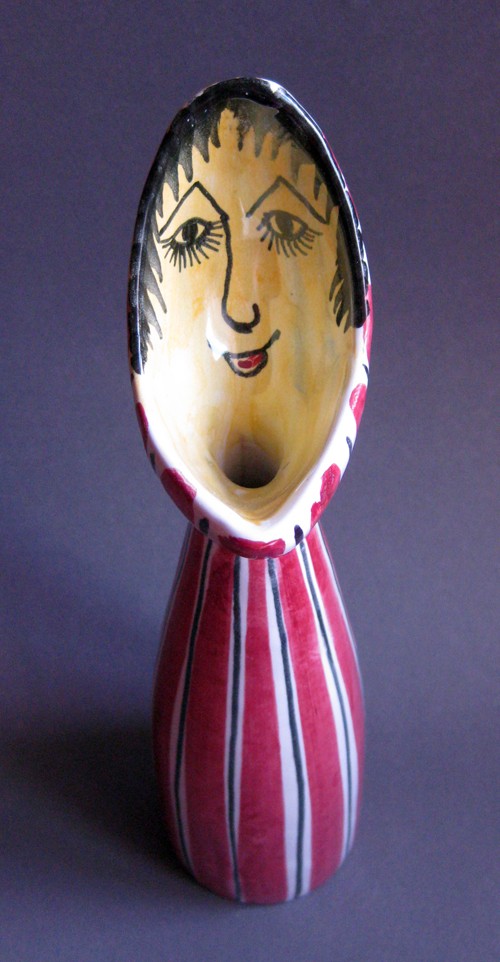 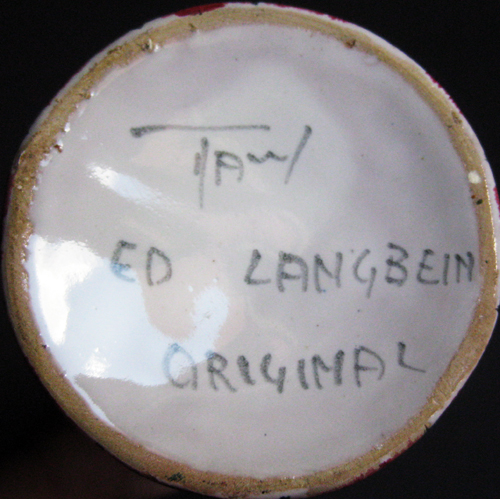 I thought I should open a thread for Ed Langbein, but I couldn't decide where to include it, American or Italian pottery?

Anyway, I think we should have a thread for him, so maybe one of the mods could move this information to a new thread.
Thanks,
Rita

I knew you'd love this one Brin

It's true, and the shape it's a bit like a Stig Lindberg vase.

Can one of the mods put all this information in one thread, please?

I can move this to a new thread entitled 'Edward E. Langbein' but is it studio? Italian or American?

Hi,
It's not studio, the designer is american and the manufacture is italian. What do you think it's better?
Maybe italian pottery? Because it's marked "Italy"?

Yes thanks Rita, that sounds best.

Ed Langbein at the MoMA collection