Shoji Hamada (December 9, 1894 – January 5, 1978) is the Japanese potter most recognised in the UK. It is fair to say that along with his friend, Bernard Leach, he was a significant influence on studio pottery of the twentieth century. Coming over to England with Leach to start the pottery in St. Ives in 1920 and then returning to Japan where he was a major figure of the mingei folk-art movement.

In Japan he established his own pottery in Mashiko and was designated a National Living Treasure there in 1955.
_________________
Now you should know by now that Potty and I need to see your bottom - we're funny that way! 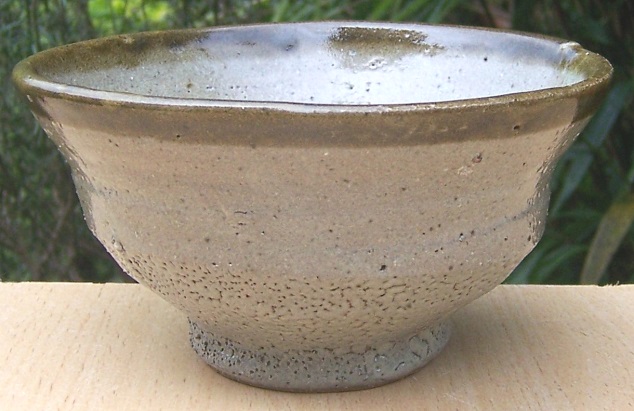 and the foot showing a type glaze that he used. 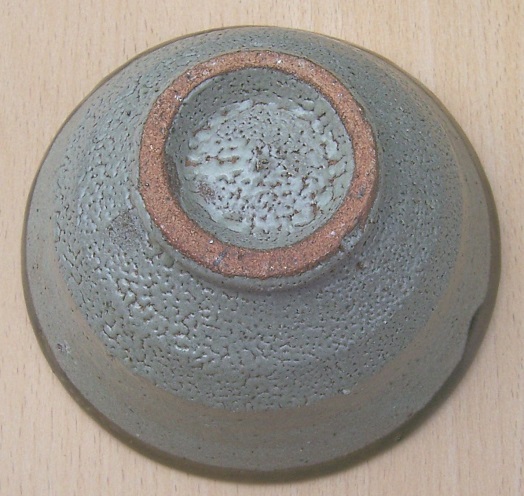 When work was bought directly from his pottery then it would usually have been purchased without a signed wooden box. However, the chawan (teabowl) above did have a box and the inside of the lid is shown below: - 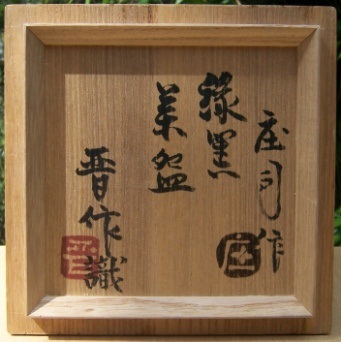 This shows Shoji Hamada's seal mark in black and the red seal mark is that of his son, Shinsaku Hamada, that it been added to authenticate that the chawan was made by his father.
_________________
Now you should know by now that Potty and I need to see your bottom - we're funny that way! 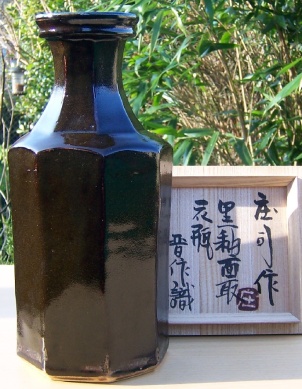 With the exception of chawan and yunomis, much of the initial work in preparing other items would have been carried out by Hamada's team of assistants that specialised in specific skills. Certainly Hamada would have glazed this vase and might well have finished it off but that's about it.
_________________
Now you should know by now that Potty and I need to see your bottom - we're funny that way! 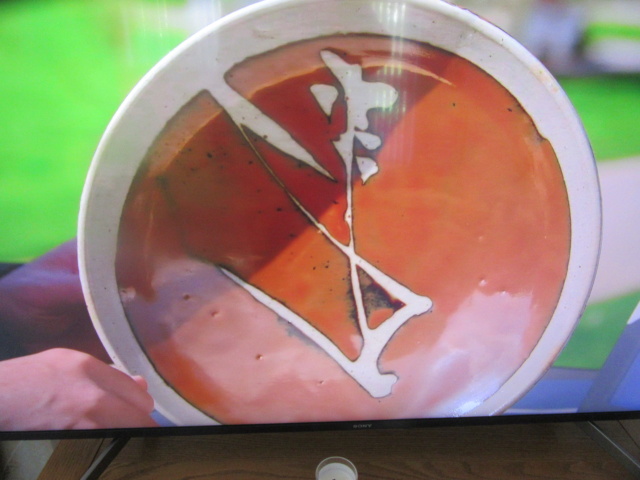 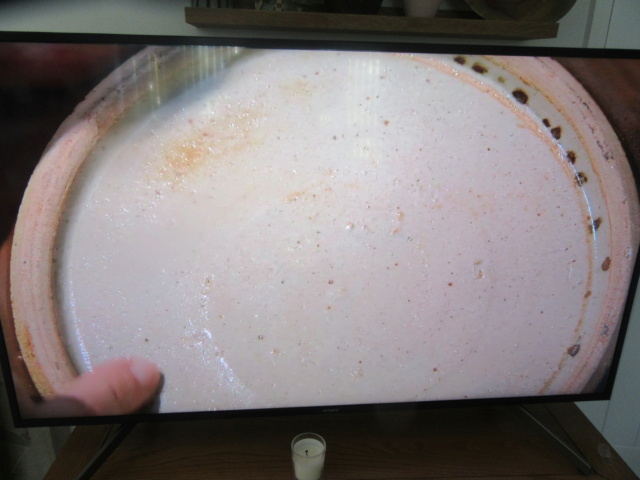 This Shoji Hamada was on the Antiques Roadshow from the Bishop's Palace Wells. Broadcast 27/3/2022.  It came from Bernard Leach's exhibition at the Guildhall Museum in the early 1960's. The expert valued at £2000. He also described the decoration as a stylised 'Whearsheaf' which I wondered about,

There are films of Hamada painting this decoration and he has a very angular motion. Whereas other Mashiko potters use a flowing line that gives a softer look.
Also of film of him decorating plates with a ladle of slip. There was a small chip or notch on the side of his ladle which resulted in a thin line of glaze running parallel to the wider band of glaze.
_________________
Carrot cake is just fake cake 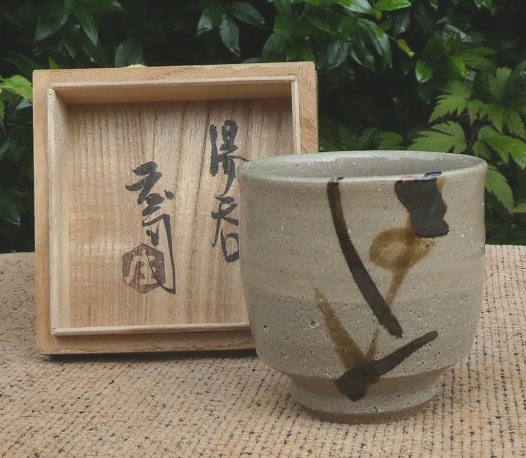 A yunomi with typical brushwork and signed wooden box (inside of the lid showing)
_________________
Now you should know by now that Potty and I need to see your bottom - we're funny that way!

Are you ever 100% sure that, that box goes with that piece? Do boxes txt describe the pieces?
What % of the overall value is in the box?
Do people fake boxes? or can you get new ones?

Unless you buy a Japanese pot from an exhibition of new pots by a specific potter with the accompanying box you can never be 100% sure that the box goes with the pot, even if the pot is marked.

The calligraphy on the box does include what is in it but this is often just the Japanese for yunomi, chawan, vase etc. Occasionally, the description is more detailed.

The value of a box is difficult to quantify in % terms and will vary from potter to potter and the market in which you are selling it. Regarding Hamada's work, pots made in Japan by him without a box are difficult to sell, so a box would increase the value and the ease of selling significantly. My guess in this case is that it would be 50%+.

People do fake boxes. An example being a well-known British potter and part time Hamada dealer, who is now deceased that was banned from this Forum. He made boxes, which he signed himself that purported to contain small items of Mashiko functional wares made by Shoji Hamada. Not only did he know that he had no legal right to do this, he also knew that even if the items in question had been made at Hamada's pottery that Shoji Hamada would have had nothing to do with them.

I have seen elsewhere recently yunomis/teabowls with boxes that didn't look correct i.e. the box is too new, the seal mark ink too bright and the calligraphy "shaky". If you see this then you should avoid but, I suppose, it doesn't mean that the pot wasn't made by Hamada. It is conceivable that someone had a yunomi bought from Hamada from his pottery without a box and having a new box made today was a relatively cheap way of increasing its value.

You can get new boxes but like the teabowl above that I posted in 2021 it would need to have information about why it was a new box - in the case above Shinsaku would have been paid for this, as he had the authority to authenticate such items. I think that this still happens but it would be necessary to confirm with Tomoo, Shoji Hamada's grandson, if this is the case.

In the example that I posted on here yesterday - I bought that from a Japanese antiques dealer that I have dealt with for many years and have found him trustworthy. The box looked correct in the images that I saw and also when I received it. The yunomi fitted the box and was what should have been inside. However, I think the most important thing is that through experience when you handle a piece of ceramics and have done so with many over the years by a specific potter you just know if it is correct. I have handled and seen many by Hamada but, not as many as by Richard Batterham, but it is the same decision making process in my mind that I go through.

I no longer have the yunomi above, as it was bought by a British potter that I have exhibited in the past, who knew what he was buying.
_________________
Now you should know by now that Potty and I need to see your bottom - we're funny that way!

So you don't want to go losing the box then. Could spell disaster. Very interesting TY

Phil Rogers and Tomoo Hamada would certify pieces made by Hamada if anyone was prepared to pay their fees. I think Rogers would also produce a box, but I don't know about Tomoo
There are old films of Hamada decorating pieces. If in doubt, watch the films; he had a distinctive method of using the brush, and his ladle had a notch in it so there was a narrower parallel line of glaze across plates etc .
_________________
Carrot cake is just fake cake

NaomiM wrote:Phil Rogers and Tomoo Hamada would certify pieces made by Hamada if anyone was prepared to pay their fees. I think Rogers would also produce a box, but I don't know about Tomoo
There are old films of Hamada decorating pieces. If in doubt, watch the films; he had a distinctive method of using the brush, and his ladle had a notch in it so there was a narrower parallel line of glaze across plates etc .

You are correct, Naomi, but Phil Rogers, now that you are naming names, had no right whatsoever to do that and it was completely worthless in the same way as if you or I did the same. It was also fraudulent.
_________________
Now you should know by now that Potty and I need to see your bottom - we're funny that way!