Hello,
I need help identifying the following pottery mark. I have three pieces - teapot, butter dish and covered dish with this mark.
Any help would be appreciated.
Thank you!
Nicole 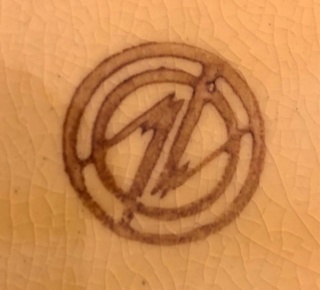 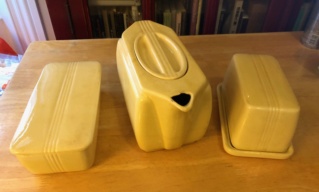 Thanks for the info! It looks art -deco to me but I have no idea about the mark.

Where did you find this?

A friend gave it to me as a wedding present 15 years ago. She lives near Cooperstown in Upstate new york.

Hi, one sold on eBay, they had it listed as Norge.

Hi again, there are also two pitchers listed at present on eBay listed as Norge.

That looks exactly like the yellow pitcher I have. I searched ebay again using the description and a similar item was posted as Vintage Westinghouse. The pottery mark matches mine. I cant post the link because I ma a new member.
What do you think? Thank you for your help!

All the Westinghouse items, as far as I know, were made for them by the Hall China Company, U.S. I think the items you have were made by a company called Norge as the pitcher has a large "N' on its side, although I have never heard of it, and a web search brought up next to nothing. I think the mark you have is actually a large stylized "N" conjoined with the two circles.

I think your items may have been manufactured for the Norge Refrigerator Company, which probably means they were manufactured by someone else.

It appears that the Norge line was manufactured by Hall.

None of the pieces I have show the N on the side. I'll look into the Hall China company. Thank you for helpful the information.

A reminder about commercial and external links for new members.....