Hello,
New User here. Recently found a piece at an estate sale in Augusta, Georgia and have been unable to identify it. Unfortunately the identifying sticker on the bottom has been worn down and is illegible. Perhaps the first letter remains as either a "P" or "F", but this is speculation. Seller had indicated that it was an early 20th Century Piece and further added that the house in which it was sold was built in 1916, but it is uncertain whether the piece was around in that time frame.

It is approximately 8.5" tall and 3.5" at the base. Wall thickness might be around 1/8". The clay used looks pale red/grey. I'd say it weighs roughly 16oz. Hat/Lid is removable and inner glaze is same color as the figure's skin tone. Dots along the base are textured as is the headdress.

Searches for Egyptian Head Pitcher or other similar inquiries usually result in links to canopic jars which stored human organs in ancient burial rituals/spiritual rites. Undoubtedly this is not one of those pieces haha. 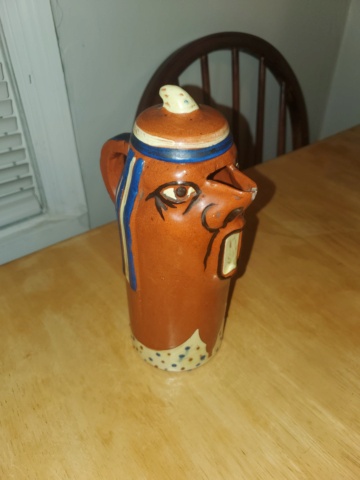 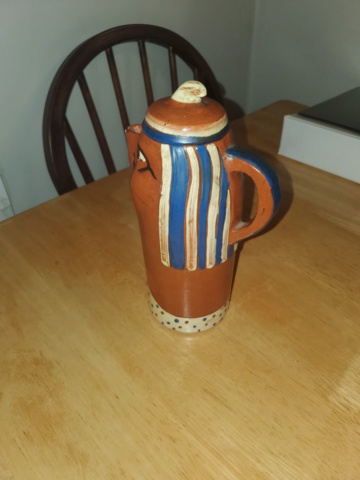 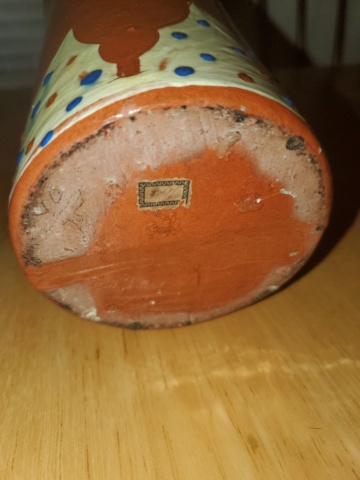 I might've thought the same, but the eyeliner and shape/color of the headdress were making me lean towards the pitcher as a caricature of the Pharaoh Tutankhamen. Perhaps it is of Central American manufacture, but that yields no results either.