This tiny slipware pot is from the collection of Alexander Sharp, who worked at the Leach Pottery in St Ives in the early 1950s and brought back a large number of pieces from his time there.

The pot is about 3 inches tall and unmarked but has a sgraffito inscription A NOUS LA LIBERTE. Looks to me to be an early St Ives production lettered by Bernard Leach himself or possibly an early Winchcombe piece by Michael Cardew.

What do experts think? 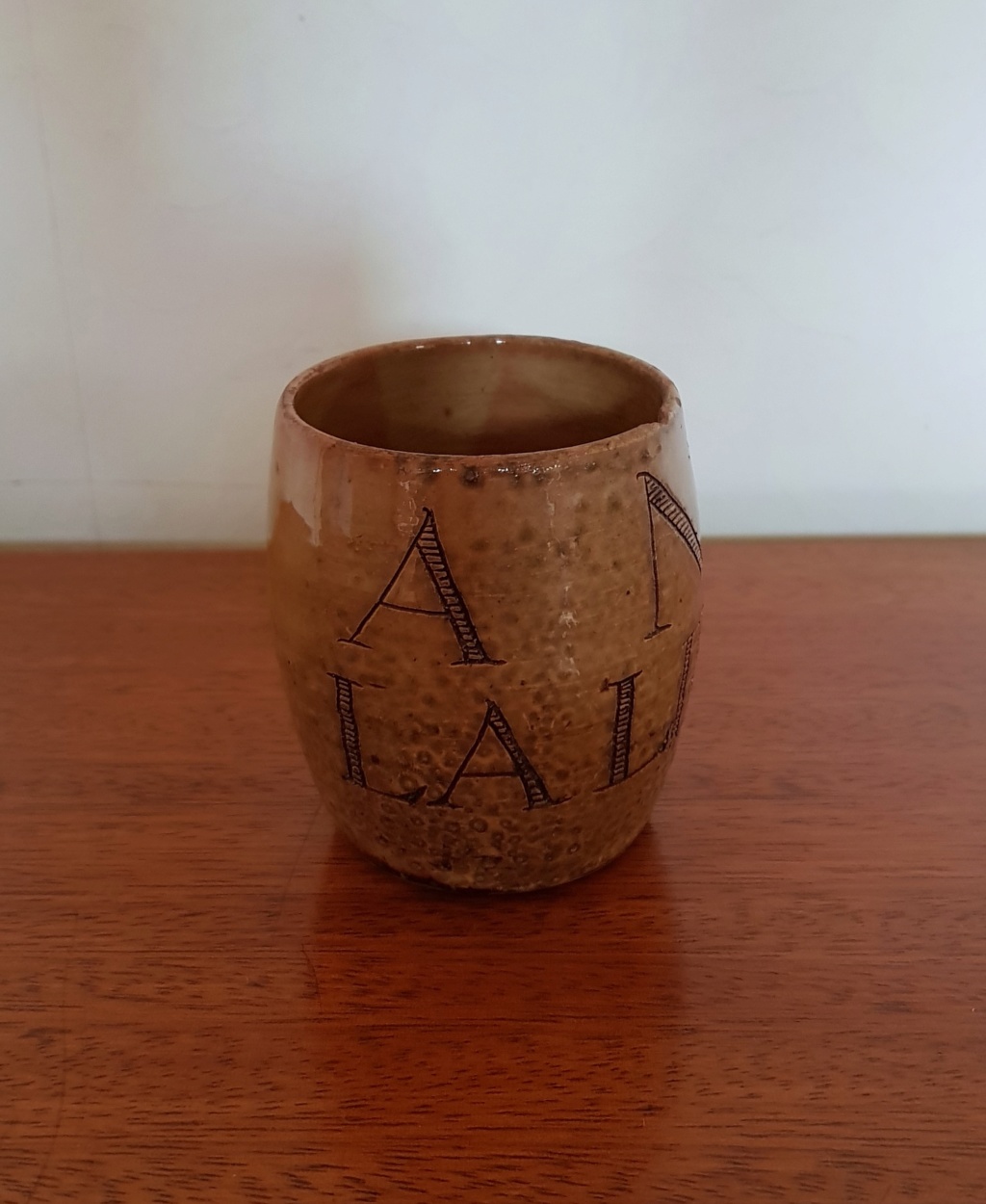 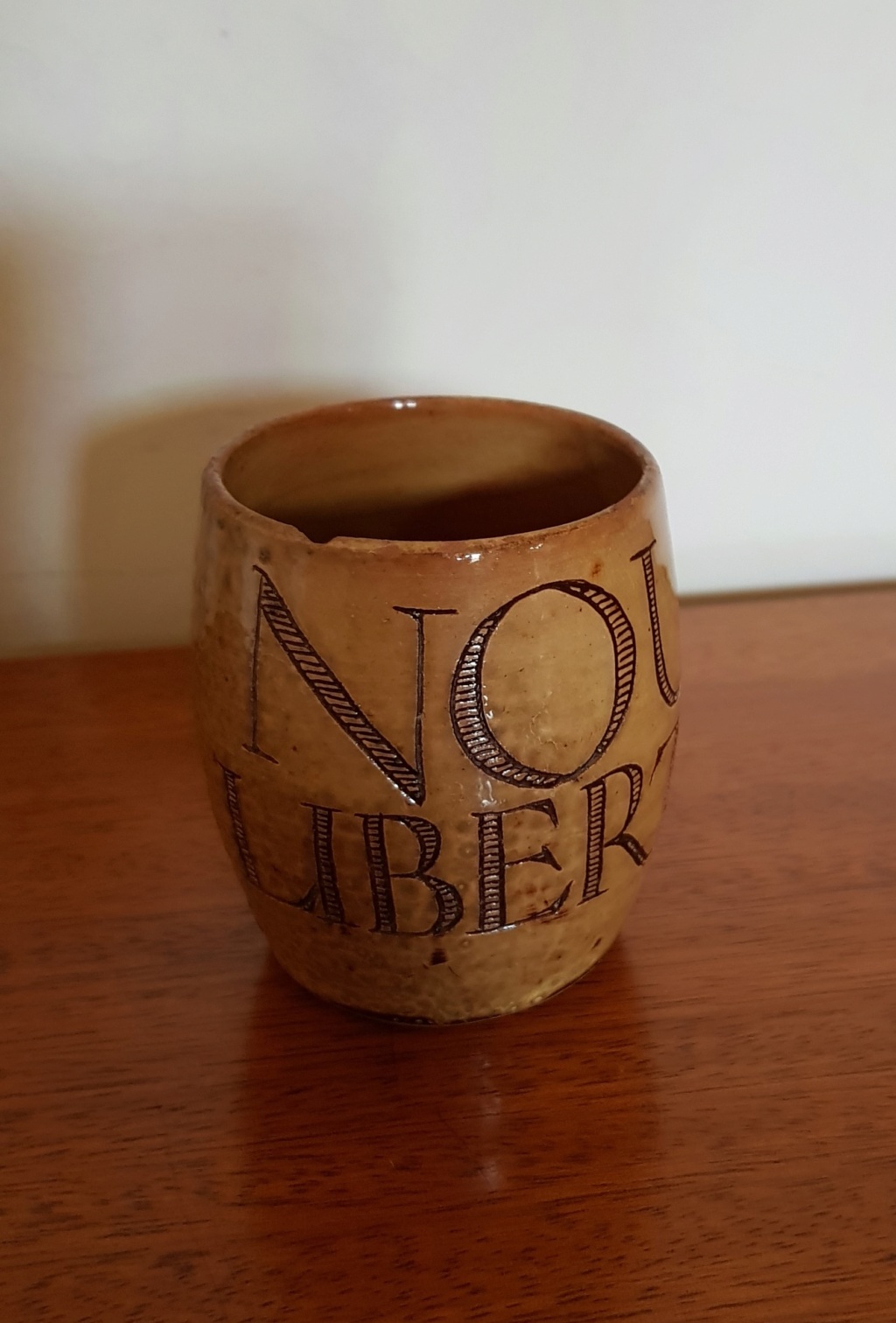 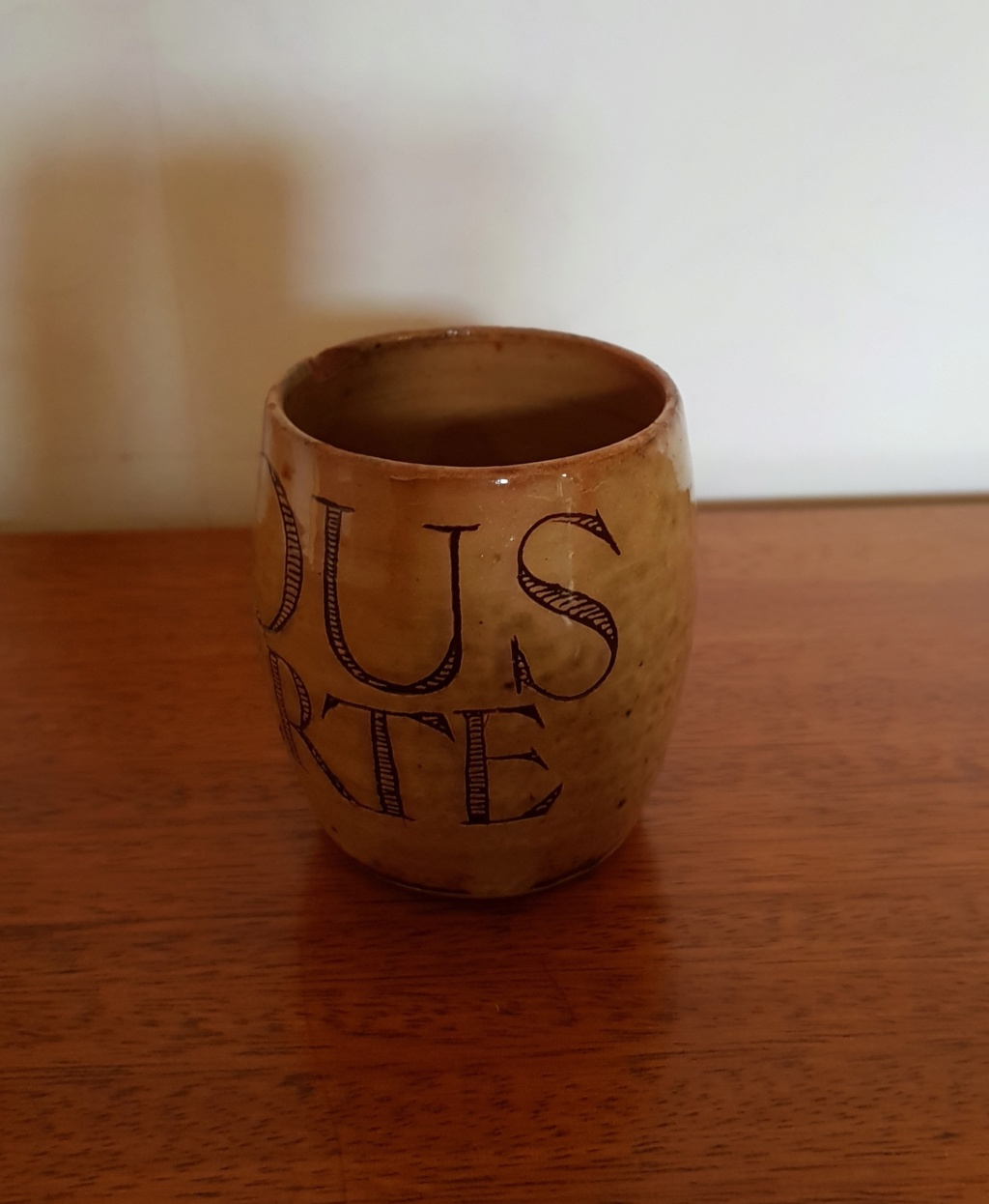 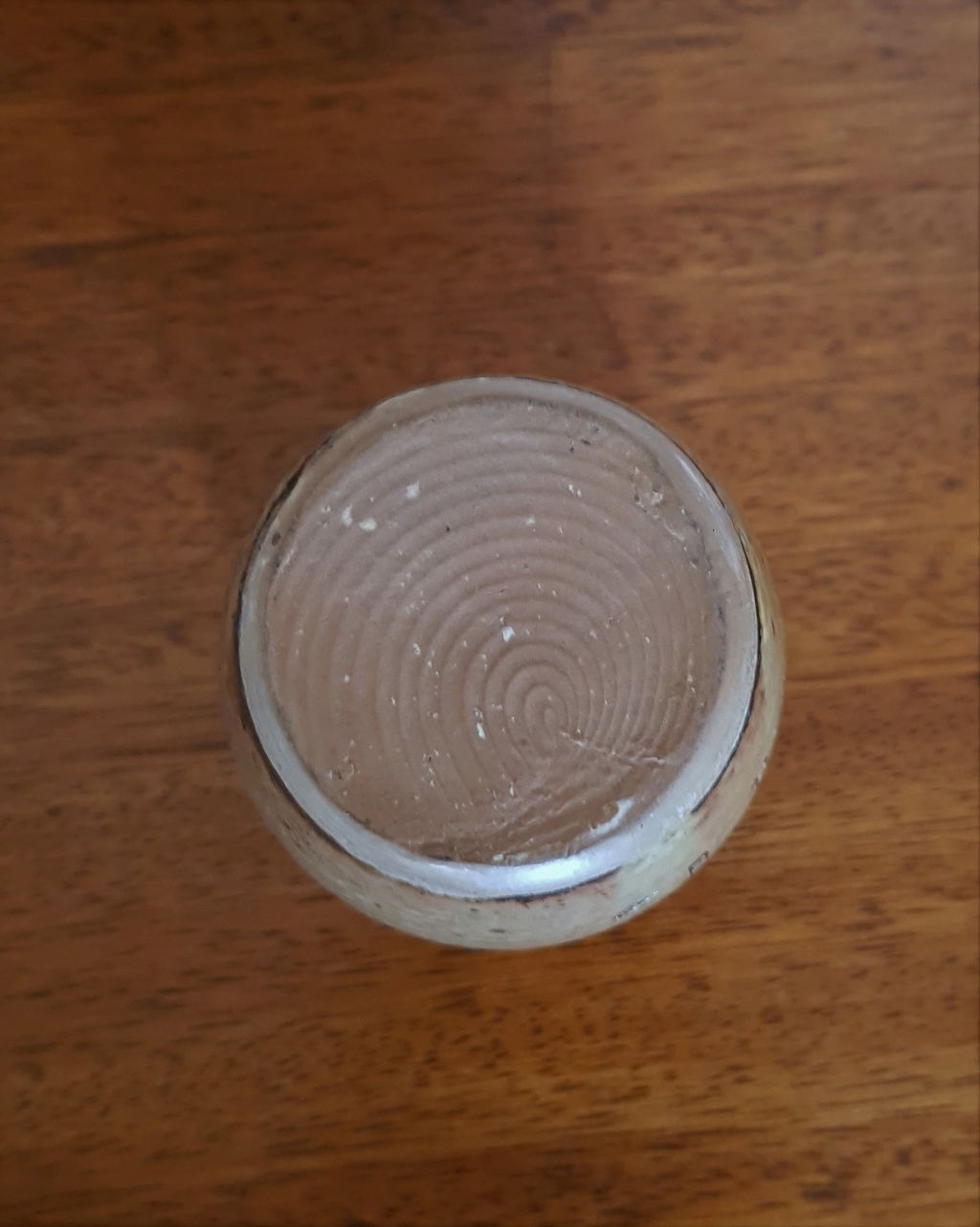 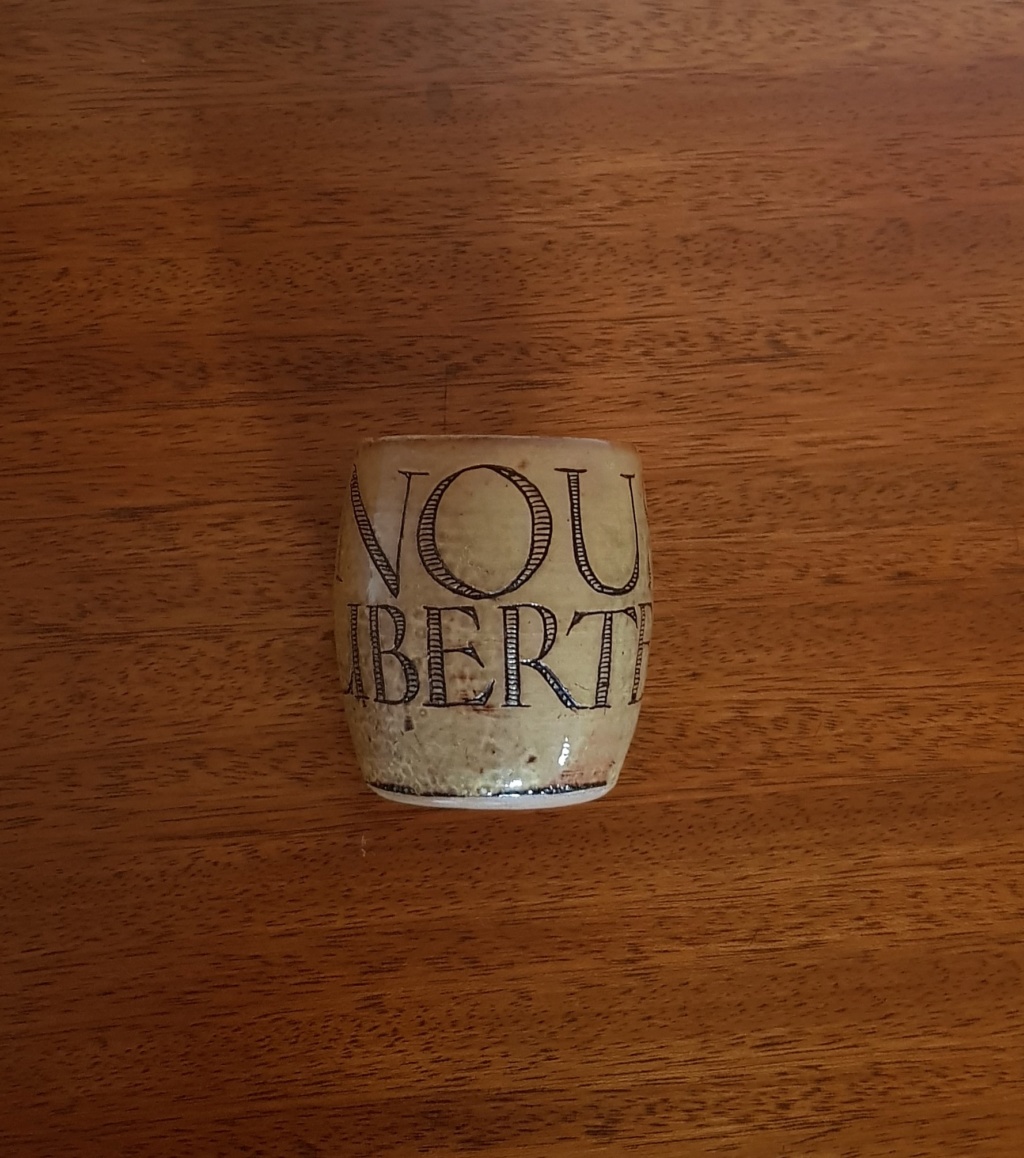 No I don't think it is an early St Ives or Winchcombe. The large majority of early St Ives used a quite reddish earthenware clay. This one here the clay looks far too light. Is it earthenware?
Virtually all Winchcombe and St Ives pieces were marked. It was an important selling point for them.
Writing in early St Ives was nearly all done by Michael Cardew circa 1923 onwards. He never used a script like this on any of his St Ives pieces, and the script itself looks slightly awkward.
A French inscription would be very very unusual, not to say unique. The production with writing on was almost entirely done to make more tourist sales, and more money.

It is an unusual way of lettering with the "shaded" in of part of the letters.I have seen a few images of Winchcombe pieces by Cardew with a similar type of lettering but not quite the same. I would imagine that it was just a test piece to see how the lettering looked on the finished item after firing.

I am sure Alex Sharp would have been able to tell you more but with no handed down provenance, who can really say for sure who did it?
_________________
Now you should know by now that Potty and I need to see your bottom - we're funny that way!