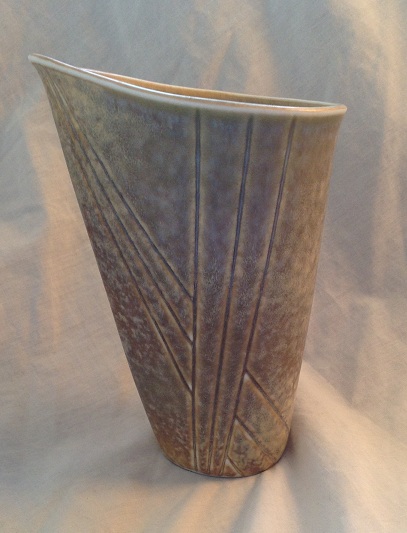 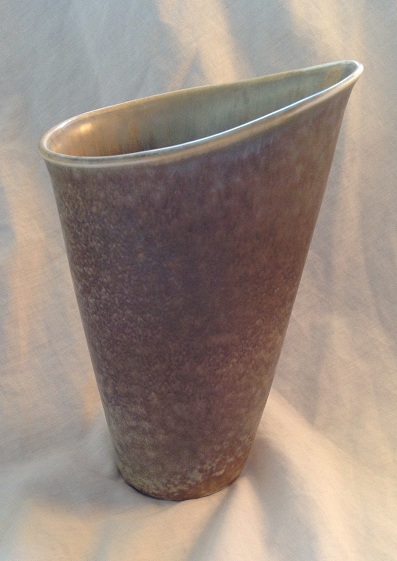 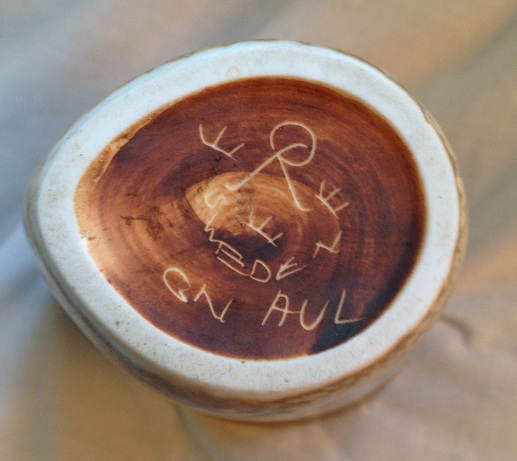 22 Crawford St. wrote:Naomi, just seen that tray....such a pretty pattern, thanks for posting that. How big please?

A ceramic swallow figure by Gunnar Nylund. The glaze is anything between green and blue, hard to define. Marked with the three crowns mark on the base and the initial G.N.

Hoping to find out some info on this bowl that I purchased last week at a car boot sale. Coat of arms in the centre possibly the Swedish coat of arms? Also the mark has "Sverige" rather than the more common English version Sweden and as yet I have been unable to find images of others like this. 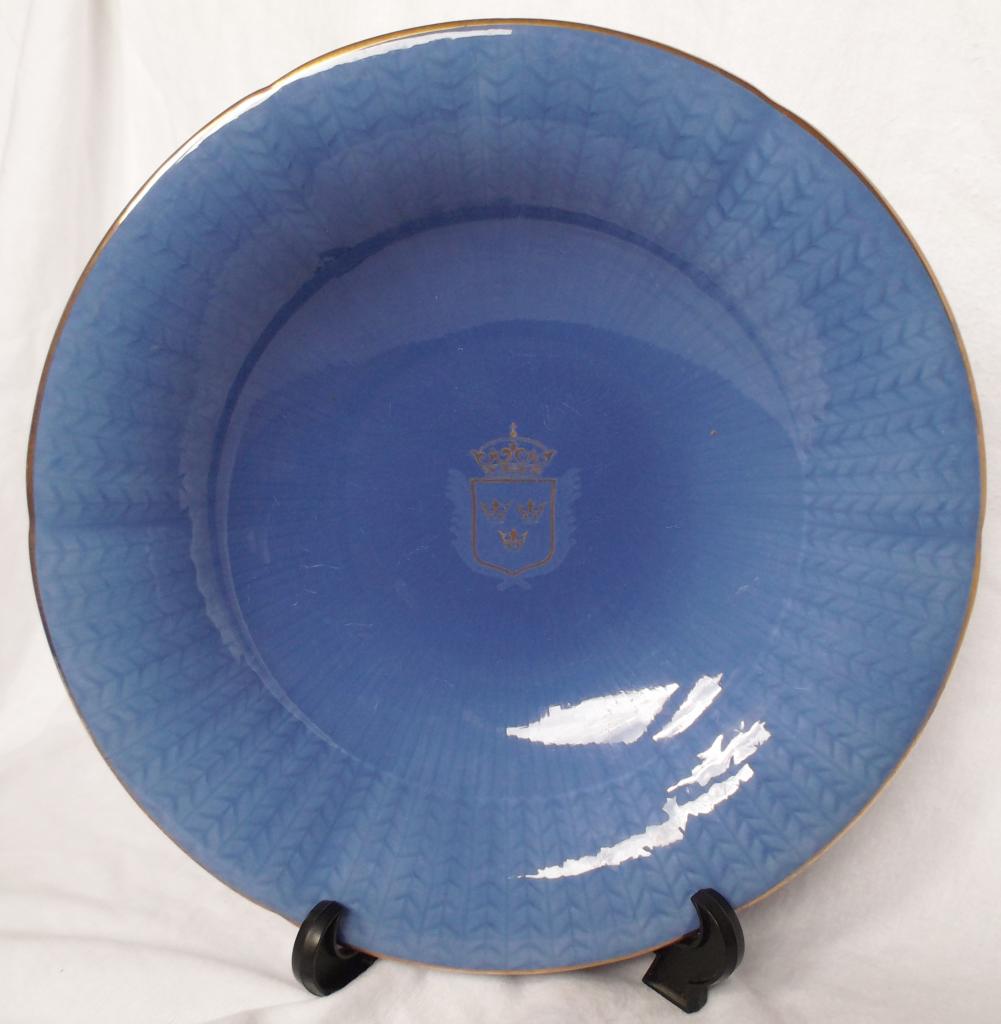 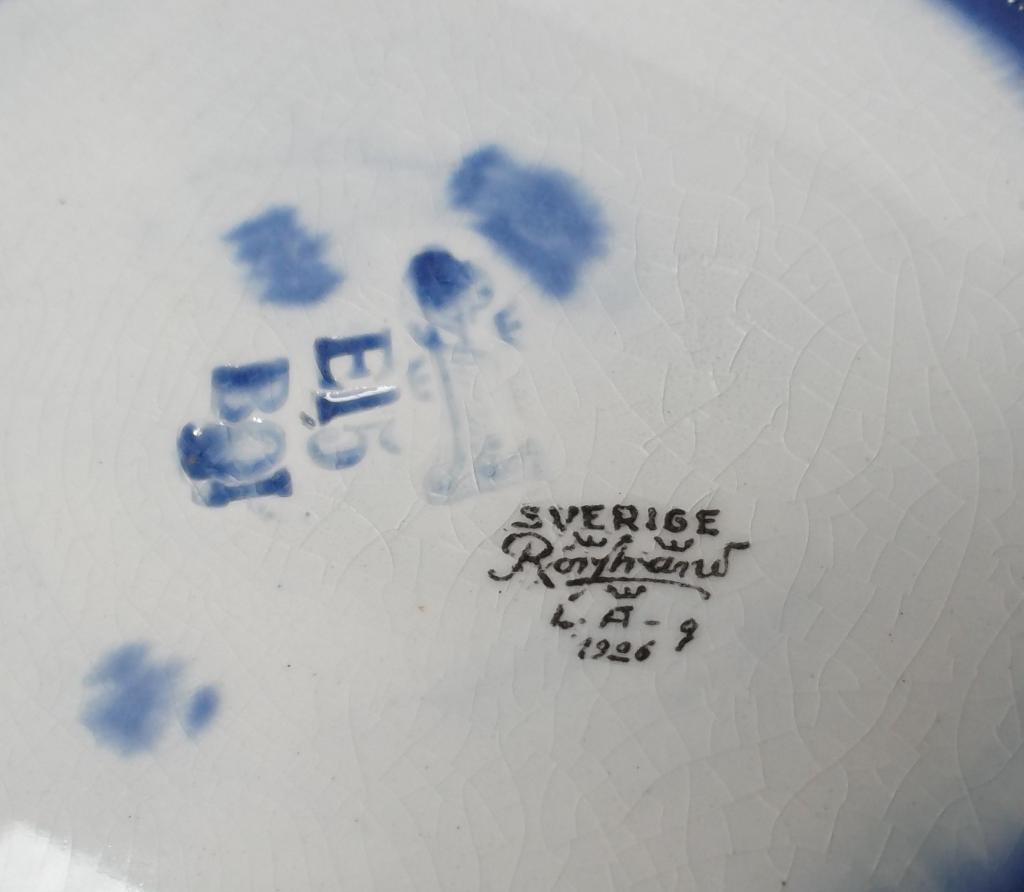 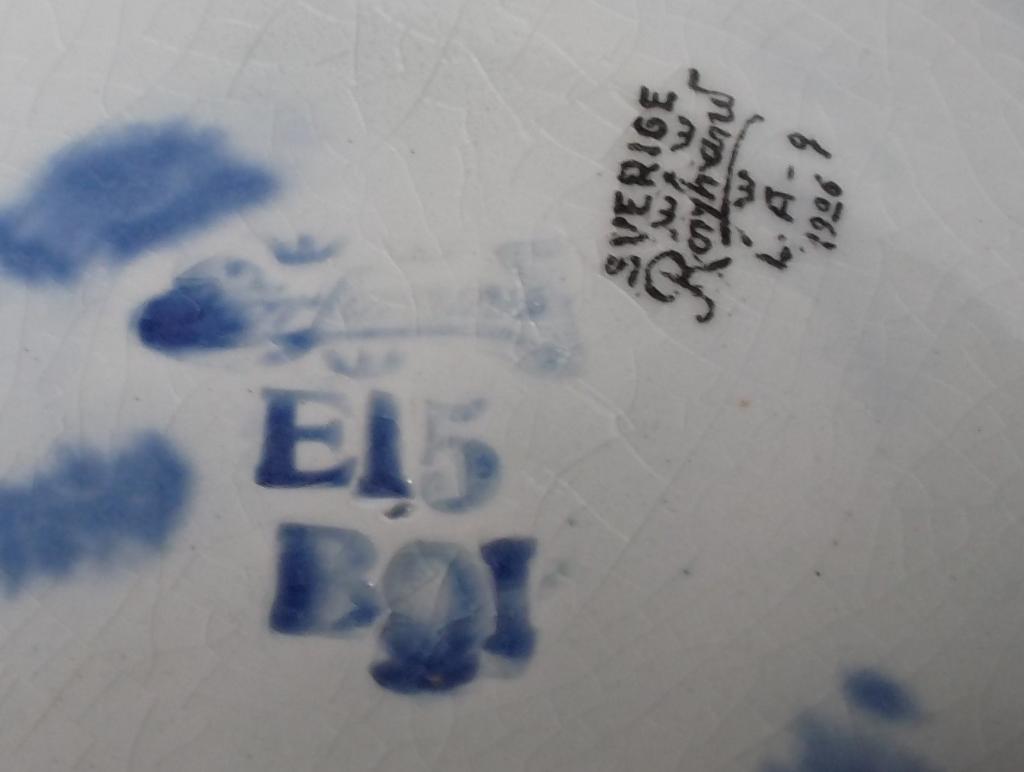 Dish by Sylvia Leuchovius, Shamelessly plagiarised by Hornsea for their
1964 "impact" range.

The blue plate above is the "Swedish Grace"-pattern designed by Louise Adelborg and was first shown at the Stockholm Exhibit in 1930.

Emil Brannstrom wrote:The blue plate above is the "Swedish Grace"-pattern designed by Louise Adelborg and was first shown at the Stockholm Exhibit in 1930.

Hi Emil, thank you for the reply. I had forgotten about this post and actually got in contact with the Rorstarnd Museum about this piece and it is indeed by Louise Adelborg as you say however it seems to be an early pre-cursor to the Swedish Grace range.

" Hi
This is a bowl made by Louise Adelborg, it has her handmade signature in the bottom L-a-G. It also has the year 1926 painted next to it. The year before she had launched her first vases in the Vase-serie in the same colour and the same significant wheat spike pattern. Your plate has the swedish weapon in it the middle. Louise got her inspiration for the wheat pattern from the weapon of the royal Wasa-familys which has a wheat sheaf in it . Louise continued to work with he relief wheat pattern and the next thing was a flint ware dinner set called "Adelborg". In 1930 she had designed a brand new dinner set called the "Nationalservice". It was produced in porcelain and had the same wheat pattern. The "Nationalservice" has been in production for Rörstrand ever since. It has changed name to "Swedish Grace" but is still the same service and today produced in mild pastel colours. I enclose some pictures of Swedish Grace of today so you can see the similarity with your plate from 1926.

...can I start? Hi Emil and welcome. CHS ATELJE pieces? Are the ATELJE (studio) pieces any different from the other ranges? I typically see marked as below. What does Studio mean in this context?

"Ateljé" means limited edition. As far as I know the most common thing is limited edition glaze on general production shapes. Pieces marked with a combination of letters, like "AXU" or "SYP", are general production pieces. Then you have pieces with letters and numbers, like "o1234" they're the unique ones. Unique pieces also have the whole signature, like "CH Stålhane" instead of "CHS" or "CHS-e" (at least if there's room enough for it on the bottom of the piece). Beware of factory seconds. Production factory 2:nds have a mark across the "R". Unique factory seconds have a mark across the unique number.

As I'm sure you understand unique pieces are the most sought after, then comes Ateljé-pieces and last production pieces.

I've started a reference page with Rörstrand signatures. It's "under construction" but it illustrates what I wrote above. I have several signatures to add and I hope it'll be of use to someone as it grows. I've also started to collect signatures of other companies as well but they're not on the site yet.

PS: Mods, feel free to move this post if it isn't where it should be. 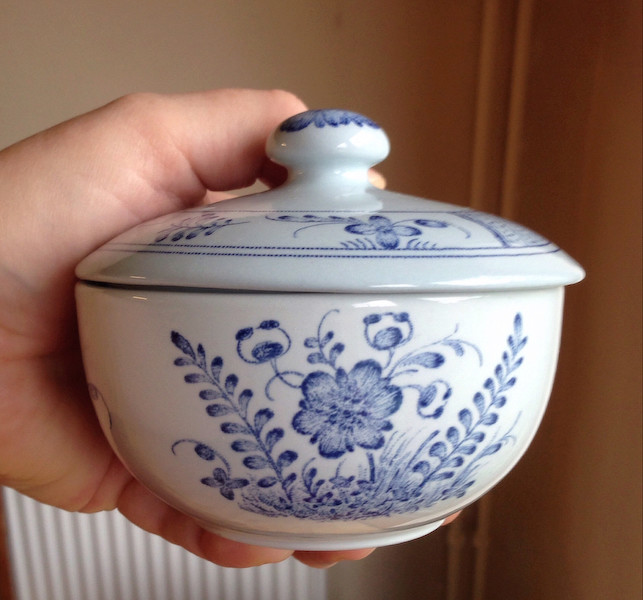 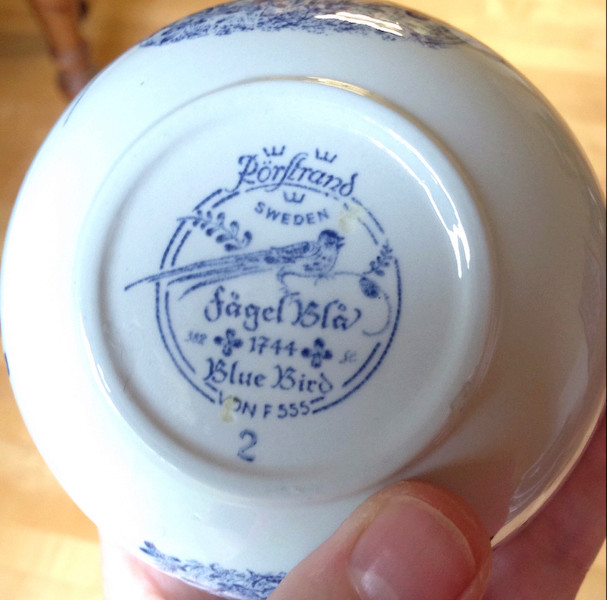 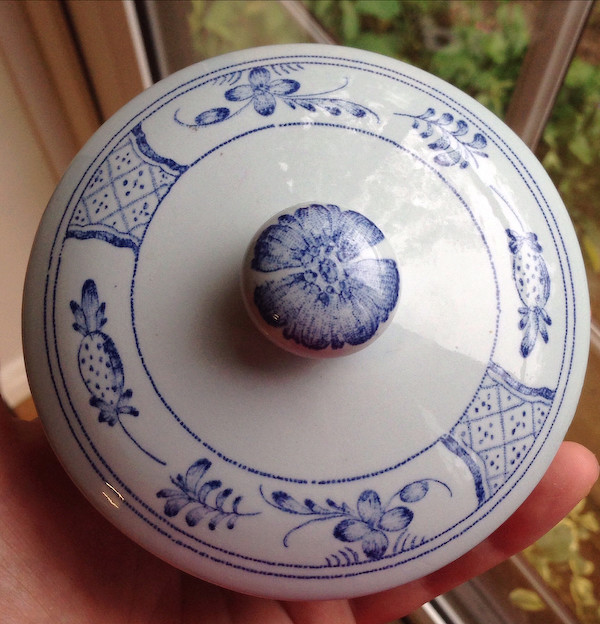 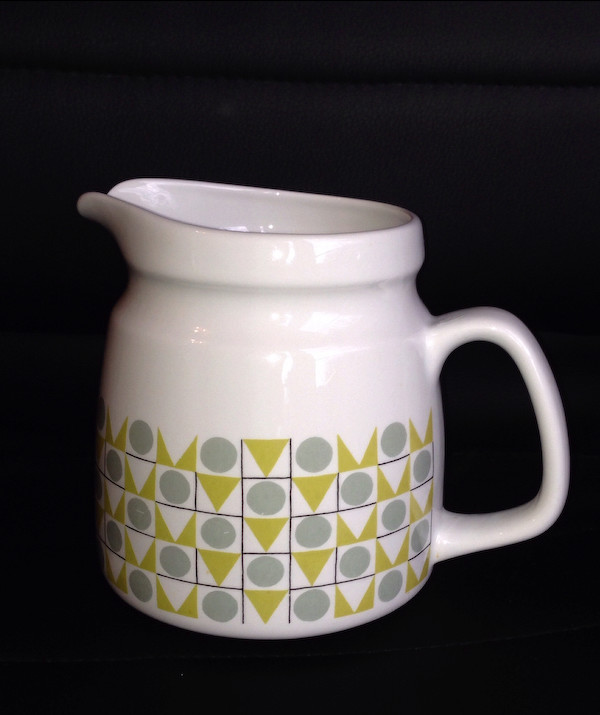 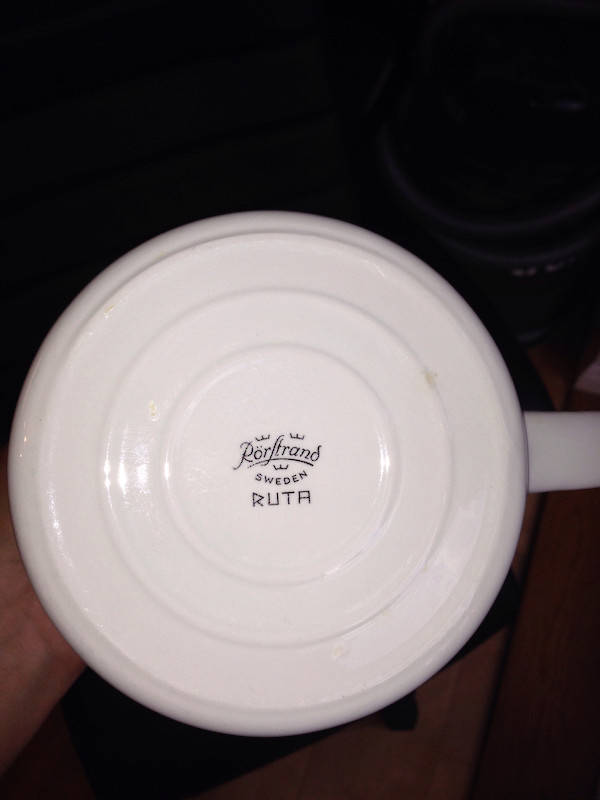 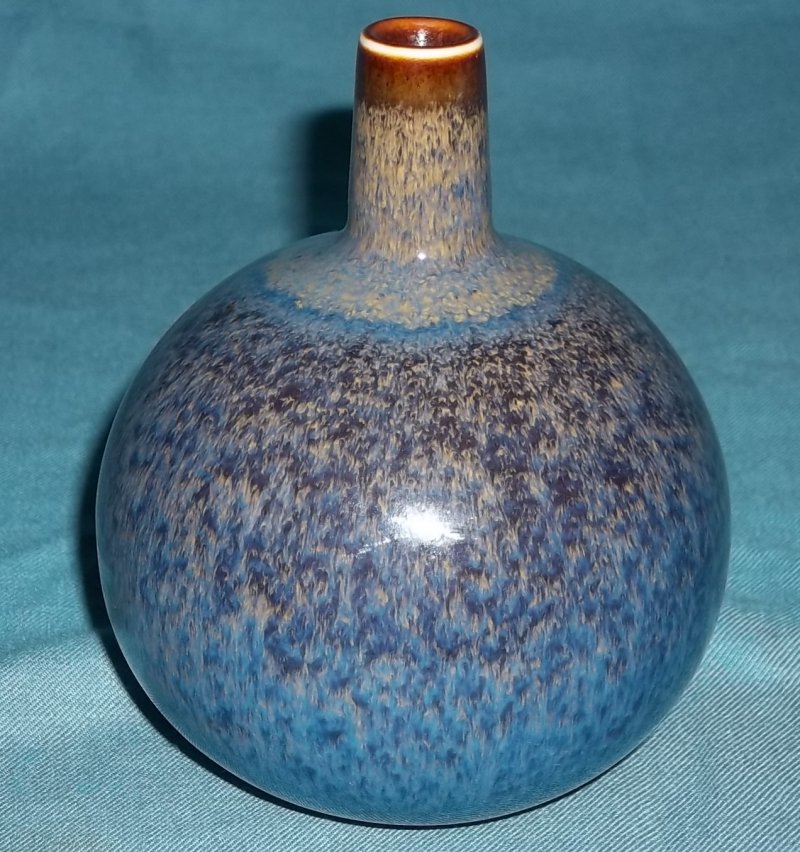 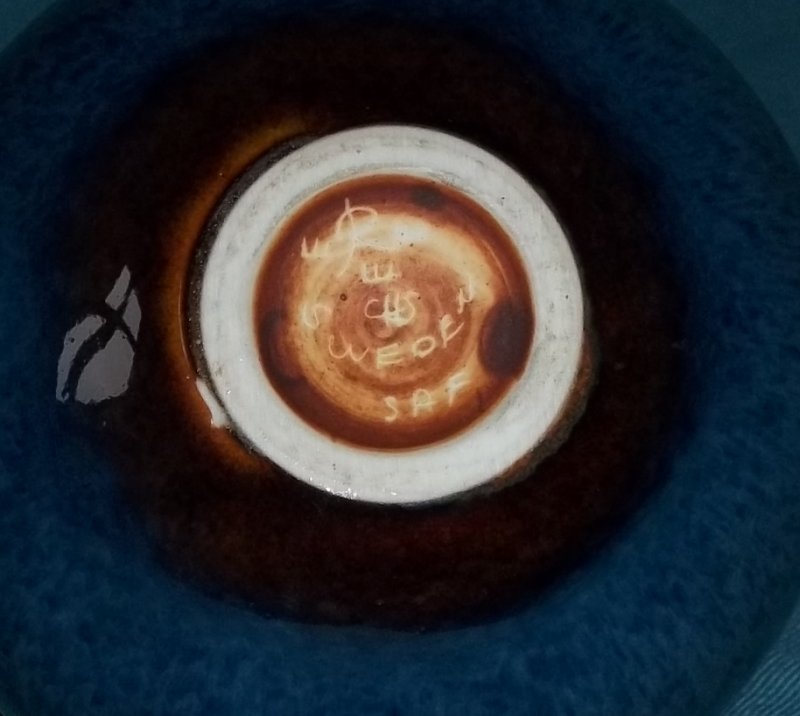 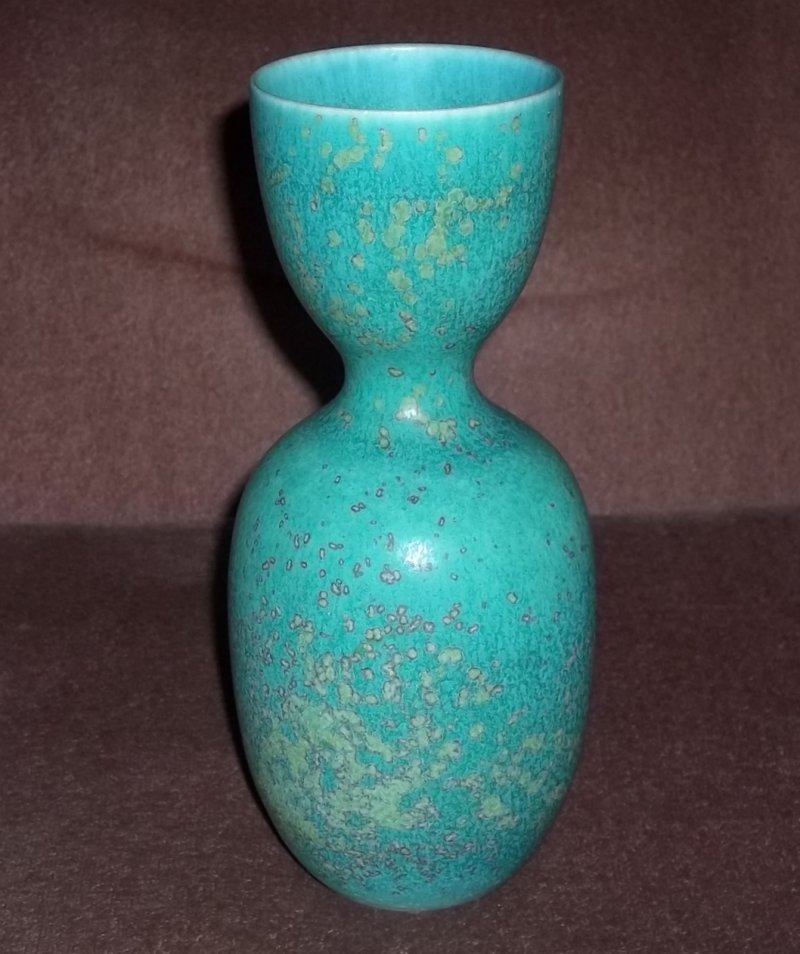 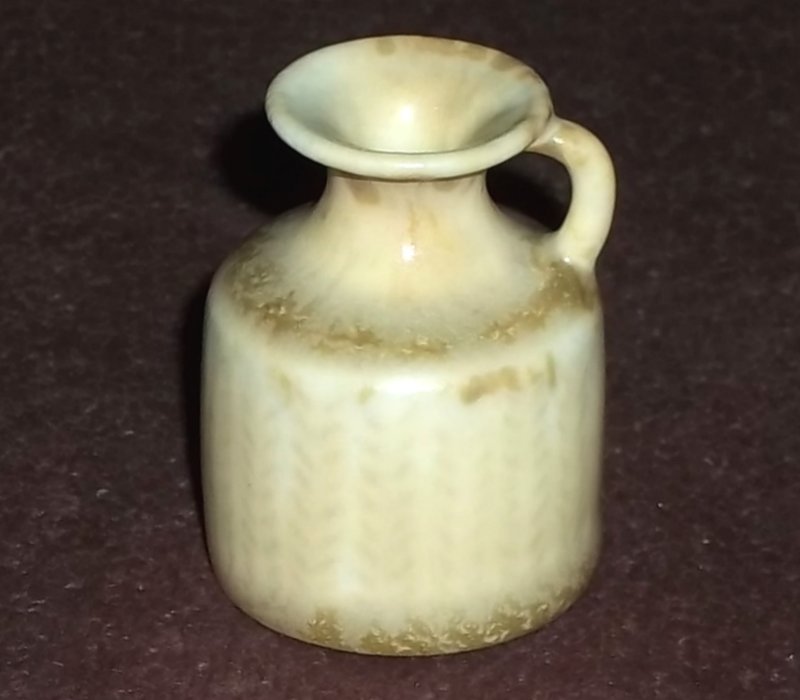 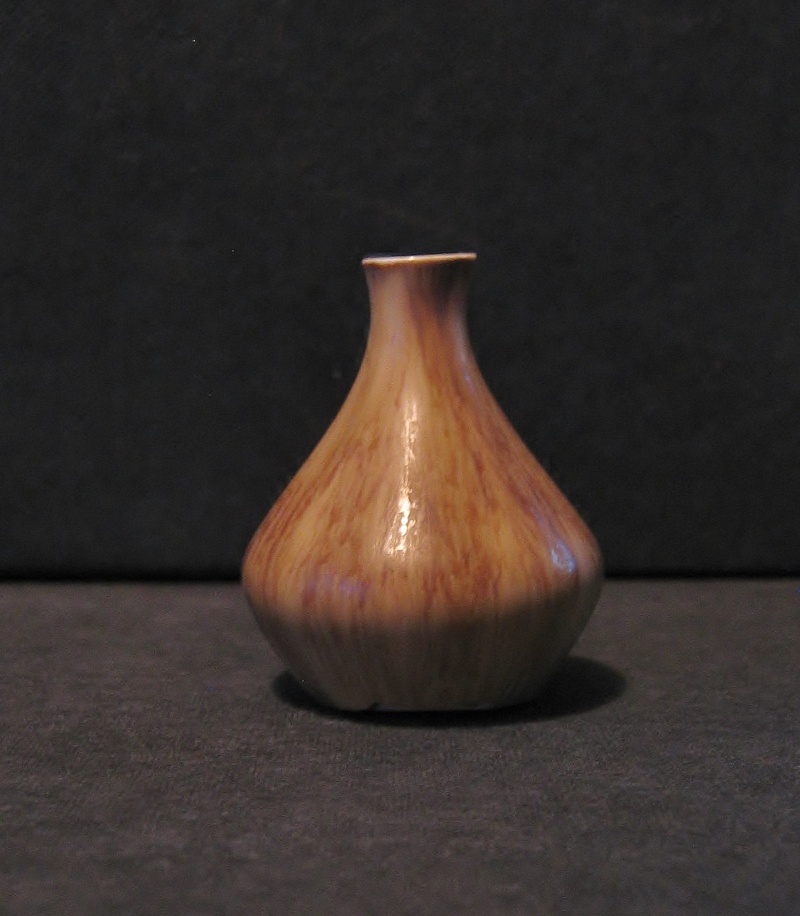 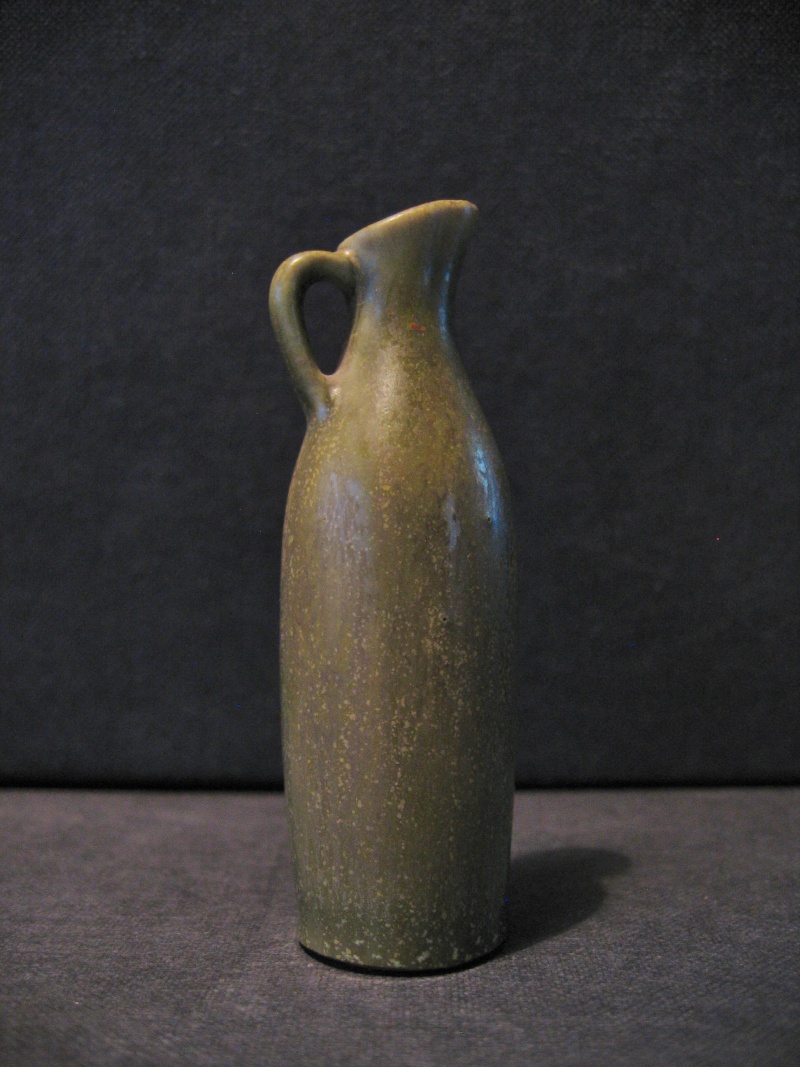 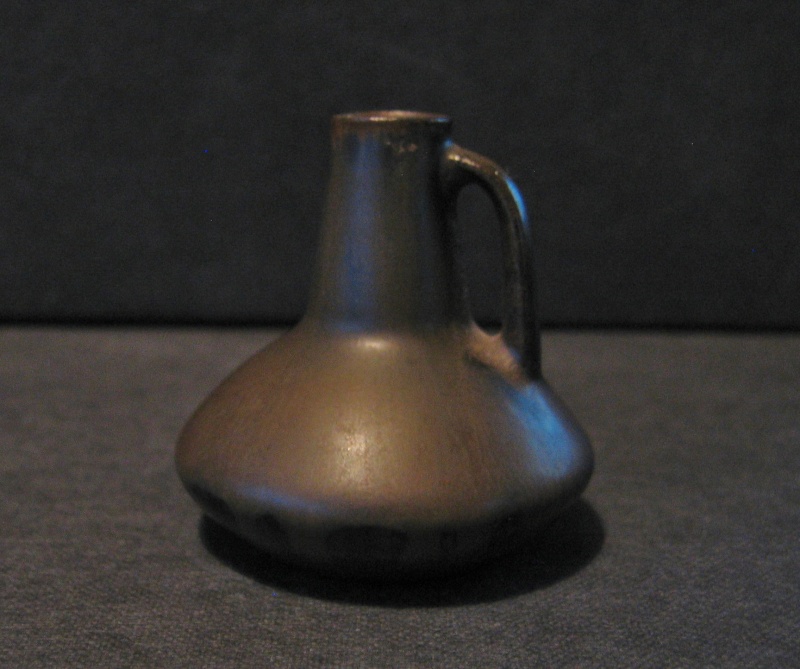 Gunnar Nylund (1904-1997) was a Swedish ceramic designer since the 1930s, best known as the artistic director of Rörstrand, was already a well-established ceramic artist in Denmark first at the Bing & Grøndahl Porcelain factory in Copenhagen 1925-28. Later, in 1928, in collaboration with chemist Nathalie Krebs, he started a ceramics workshop, which became Saxbo in 1930, which kept making his stoneware until 1932. Nylund worked for Rörstrand from 1931–1955, the majority of the time as artistic director. He became well known for his new matte feldspar glazed stoneware in hare’s fur and crystal glazes and for his stoneware animal sculptures.

Over five decades, Nylund crafted some 30 reliefs and sculptures commissioned for public spaces. Moreover, in the 1940s he was commissioned to do several freelance projects, including designing bathroom fixtures and interiors for the Swedish bathroom manufacturer Ifö. He also designed a number of products for refrigerator use. From 1955, he was artistic director for Strömbergshyttans glassworks in Hovmantorp, and later freelanced for the company. In the early 1960s, Nylund returned to Copenhagen. There he started producing stoneware for Nymölle Keramiska Fabrik in Lyngby. After a change of ownership at Rörstrand in the mid-1960s, he re-turned to Nymölle as a freelancer, producing a more industrial class type of stoneware. At this time he also created Europe’s largest stoneware fountain the “Scanisarius” in Bromölla, Sweden.Nylund was born in Paris in 1904, where his Danish mother, the artist Fernanda Jacobsen-Nylund and his Finland-Swedish father, the sculptor Felix Nylund, were studying. In 1907, the family moved to Copenhagen, moving later to Helsinki, where Nylund attended elementary school. When the Finnish civil war broke out, he moved with his mother in 1918 to Denmark and continued his studies at boarding school. Following graduation in 1923 and completing an architecture internship and studies in ceramics in Helsinki, he started studying architecture at the Royal Danish Academy of Fine Arts in Charlotteborg, Copenhagen. He became practiced in sculpture by assisting his father Felix, who encouraged him in the study of animals. Nylund did some extra work at the Bing & Grondahl Porcelain factory, designing new products for a Paris exhibition. He was then offered full-time employment by the company and as a result gave up his architecture studies. At Bing & Gröndahl, his mentor was Paul Gauguin’s son Jean. Nylund created a few thousand unique pieces at Bing & Gröndahl.

Gunnar Nylund was renowned for his revolutionary stoneware in matte glazes and novel colors, and also for the mass production that Nylund & Krebs started in the legendary Patrick Nordström’s workshop, which they later took over. Prior to a major exhibition in 1930 at Bo in Copenhagen, they launched SAXBO, a groundbreaking Nordic series of iconic stoneware, mostly undecorated in matte glazes and novel colors.

The SAXBO stoneware generated a lot of attention at a Svenskt Tenn exhibition, the same year that Nylund was recruited to Rörstrand, at that time owned by Arabia. In order to start crafting stoneware the young ceramist was moved to the company’s factory in Lidköping, which was relatively unknown at that time and which focused solely on porcelain produc-tion. There he succeeded, thanks to his own specially developed technique, to produce the first Swedish matte glazed stoneware and sculptures in shimmering colorful stoneware chamotte, which was very popular and had an important impact on modern Swedish ce-ramics. Nylund’s stoneware at that time featured Sung-inspired crackelé and oxblood glazes – pieces that ranged from monumental original sculptures in stoneware chamotte and two-feet high urns to moderately priced miniature vases and bowls. In the mid-1930s, the Chamotte was produced both in series and original sculptures. After a one year break at Bing & Gröndahl in Denmark, Rörstrand’s new chief Fredrik Wehtje managed to get Nylund to return to Lidköping in 1937. Here he designed numerous tableware series and laid the ground for all the factory’s1940s collections, featuring innovative glazes.

From the mid-1940s, Nylund devoted much of his time to reliefs and other work for the decoration of public spaces, for example the “Theater¬ Cavalcade” at the Malmö Stadsteater, “The Jungle Awakens” now found at the entrance of the library of the University of Agriculture in Uppsala, the “Three Västgöter”, relief for the Västgöta nation Uppsala, “Life in the square” for Lidköping’s Sparbank, “Our Times” relief for the Göte-borgsposten, “Symfonica” relief for the m/s Gripsholm ship, as well as alter pieces, etc., for the Lidköping crematorium, the alter of Skara cathedral and the “Thorn of Crowns”. He also created sculptures such as “St. George and the Dragon” for the National Institute of Arts and Crafts and the “Mermaid” fountain for the National Museum in Stockholm in 1943, a work that has been moved to the Rörstrand museum in Lidköping, where other reliefs such as “The oven is empty” are found.

Most of Nylund’s original sculptures in stoneware chamotte ended up in museums, as did much of his other work. For example the impressive “Lion Head” is found at the National Museum in Stockholm, “Blue Bird” is at the Sèvres museum in Paris, his antelope head “Abyssinian mountain nyala”, is at the Röhsska museet in Gothenburg and the “Hamadryas Baboon” is at the Malmö Museum. The museum in Riga is home to the ”Magnus Gabriel de la Gardie”, and the Danish Museum of Art & Design houses the “Hannover” portrait, among other works. His piece “Bulls head in oxblood” was bought by the Ateneum museum in Helsinki. And a lot of his other work can be found at other museums around the world.

Gunnar Nylund’s work and a number of his many tableware collections and kitchen series are included in most reference books on 20th century ceramics. However, such information contains inaccuracies, which is why he has elected to publish his memoires. In the book he tells of his life and most of his work in conversation with his daughter Bie Nylund. The book also contains press clippings as well as a lot of photographs cataloging Nylund’s great collections primarily from his half century with Rörstrand as well as his other activities, even after 1970 - as a pensioner with a workshop in Lomma, Sweden. He describes the many exhibitions he designed and arranged. The book is expected to be published at the end of 2012/early 2013 in conjunction with the anniversary of his most important Swedish exhibitions: Gallerie Moderne in Stockholm, Röhsska museum in Gothenburg 1932-33 and the chamotte exhibition in the mid-1930s, and the hugely successful exhibition “Rörstrand through three centuries” at the National Museum in Stockholm 1943

Interesting. Seems NOHAB was an engineering firm, so this could have been a commission.

NOHAB (actually Nydqvist & Holm AB, from 1974 AB Bofors Nohab) was an engineering company in Trollhättan founded in 1847 under the name of Trollhättan Mechanical Workshop of Antenor Nydqvist ,