Just heard that Kevin de Choisy has passed away. Seems we don’t have a thread of his work in Studio Pottery; I’ll see if I have any photos from the fairs.

Kevin de Choisy, who was born in 1954 and died recently, was one of those rare individuals who are able to produce top quality work in earthenware and stoneware, as well as porcelain.

After training in ceramics at Harrow School of Art, Kevin went out to the United States, where he did production throwing, as well as other more mundane jobs. After staying there for over 12 years he returned to England in 1991 he became a ceramic technician at the University of the West of England and it was there that he developed many of the forms and the decoration that he uses today.

He is best known for his contemporary take on the polychrome and creamware glazes that were developed in England during the Industrial Revolution by Thomas Whieldon, William Greatbatch and the like. More recently Kevin became interested in Chinese Song ceramics and the celadon glazes in particular. To my mind he was one of this country’s leading authority on high fired Oriental glazes, having a real feel and understanding of the subtleties of the many types of celadon.

I first came upon Kevin in 2010 purely by chance and in 2011 he was one of the potters in a joint Harlequin Gallery/Long Room Gallery exhibition held in Winchcombe called Artists of the South West II.

Here is an example of a celadon bowl in porcelain and a stoneware bowl too. 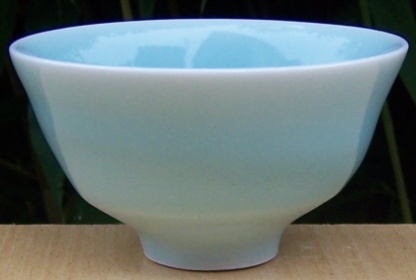 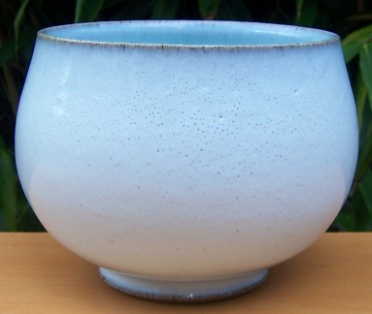