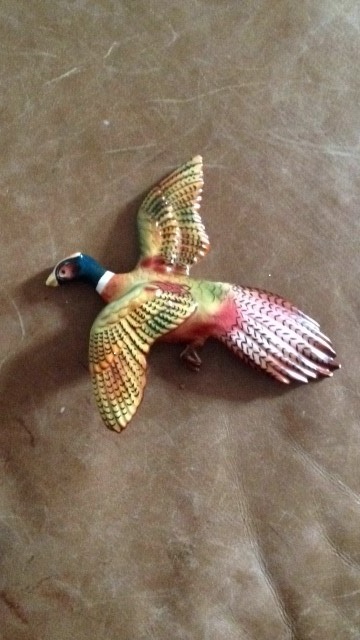 sorry for not posting the back of it, there are no marks on there though. Presumably this was from a set of three, belonged to partner's grandmother. Looking for two more for our wall.

your pheasant is far better than any flying duck but no idea about the maker.
An image of the back often helps, even without a makers mark
_________________
Due to travel restrictions the US was obliged to hold the coup at home this year

Silly me. I'm wondering if it's Japanese. Will get a picture of the back of it and dimensions later. Thanks for replying!

I think it's UCAGCO Ceramics JAPAN circa 1950s.  I gather these had a foil label on the back, which has fallen off in your case.  Or it might one of the Ceramic Norcrest Ringneck Pheasant Birds Wall Art Plaques from the 1950's, also from Japan.  I can't post links yet (new member) but try Google Image searching those two examples, and you should see pics which look like the pheasant you've got.  Good luck with your search!

this is so helpful. Found some which I think are going to go with the one we have! Thanks so much!

You're welcome!  Note: while looking around for something else, I noticed the website "gotheborg" had a collection of 20thC Japanese marks - and where I saw the following:

"UCAGCO actually means United China and Glass Company. Its offices were based in New Orleans and New York. Ucagco was primarily a distributor of dinnerware and glassware. They were the distributor of many Japanese china patterns during the early 1950s. United China & Glass Co. Inc., better known as UCAGCO, dating back to 1850. Founded by Abe Mayer and originally called Abe Mayer & Co., the importer did business throughout the Southeast U.S. as well as Central and South America. It wasn't until the 30s that the company took on the official trademark of UCAGCO and began expanding overseas. In fact, after the war, the company's agent in Japan, S.A. Stolaroff signed the very first contract allowing imports from Japan. A talented ceramic designer himself, Stolaroff worked alongside many Japanese potteries to lead the company's line of ceramics. In 1956, UCAGCO was sold to Sammons Enterprises and in 1962, Stolaroff, who had become the company's president, retired."

In case you were curious to know a bit more about the maker, etc.