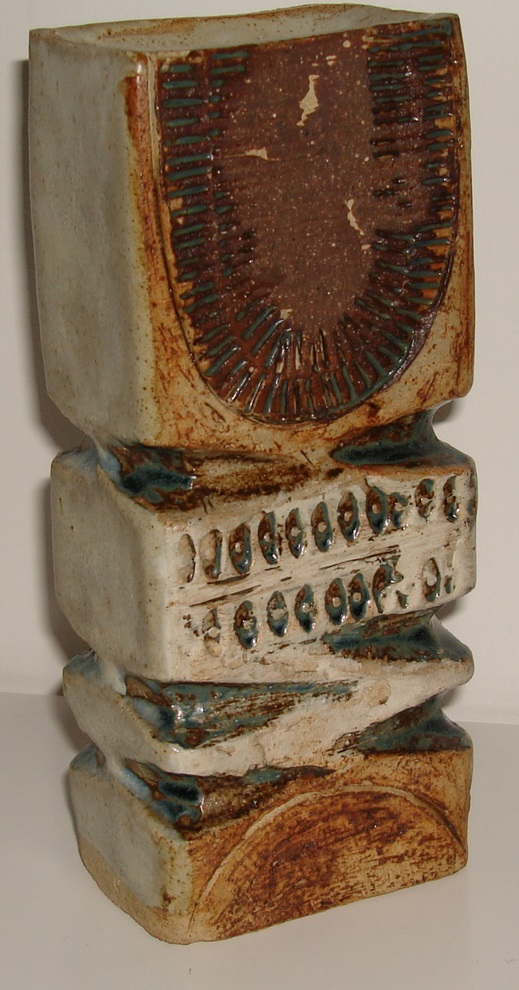 Need a base pic, but looks more like Rooke to me.

The mark would be an incised W on work like this often difficult to see. How heavy is it? This type of 60's stuff can be quite lumpy. My vote would be for Wallwork. That type of decoration on the top is not something you see much of on a Rooke piece.

Wallwork almost invariably has a concave depression on the base, so a base photo is essential. We do have a couple of long threads on Wallwork and Rooke, so if there’s no mark then you’ll need to plough through them and highlight the pots that match the different elements in the decoration. Each handbuilt vase was unique but both potters did carry over their styles of decoration on a mix & match basis.
_________________
Carrot cake is just fake cake

Just checked over my collection. Got one of a very similar shape. I would say definitely Wallwork 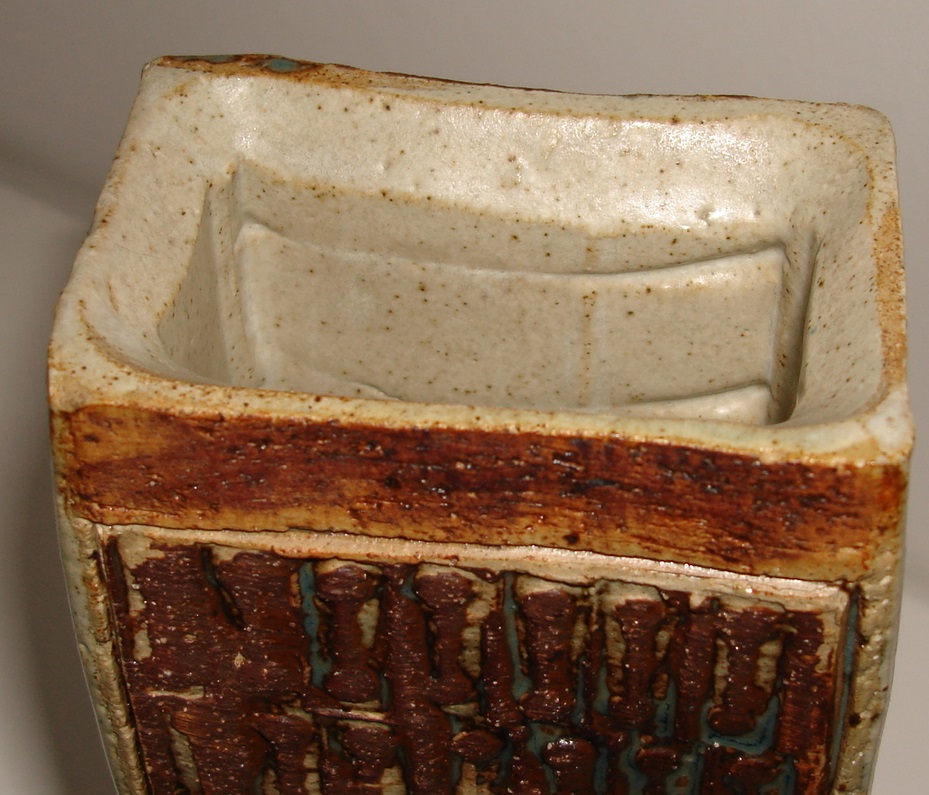 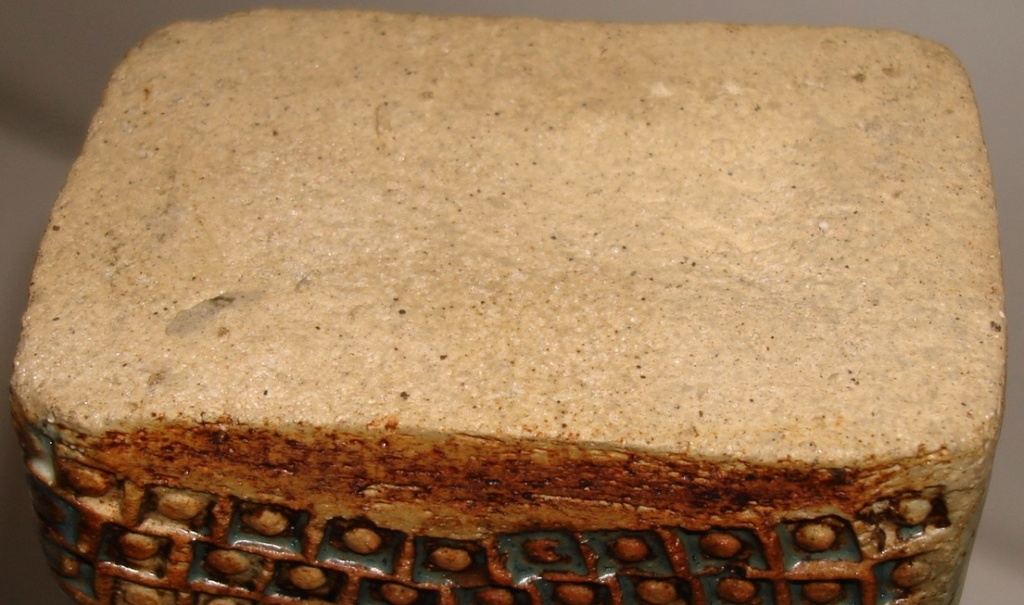 Weighs about 900 kg. Measures 7 inches high. It does indeed have a slight concave depression in the centre of the base.

Just to confuse things even more, there was a lady called Sally Shalam who worked as an assistant to Jon Cheney at Porthleven Pottery back in the 60s or 70s who made similar pieces.
Without an incised AW or W, I doubt it’s by Wallwork
_________________
Carrot cake is just fake cake

These two are the insides of slab built vases by Fern’s Porthleven Pottery. The technique looks very similar 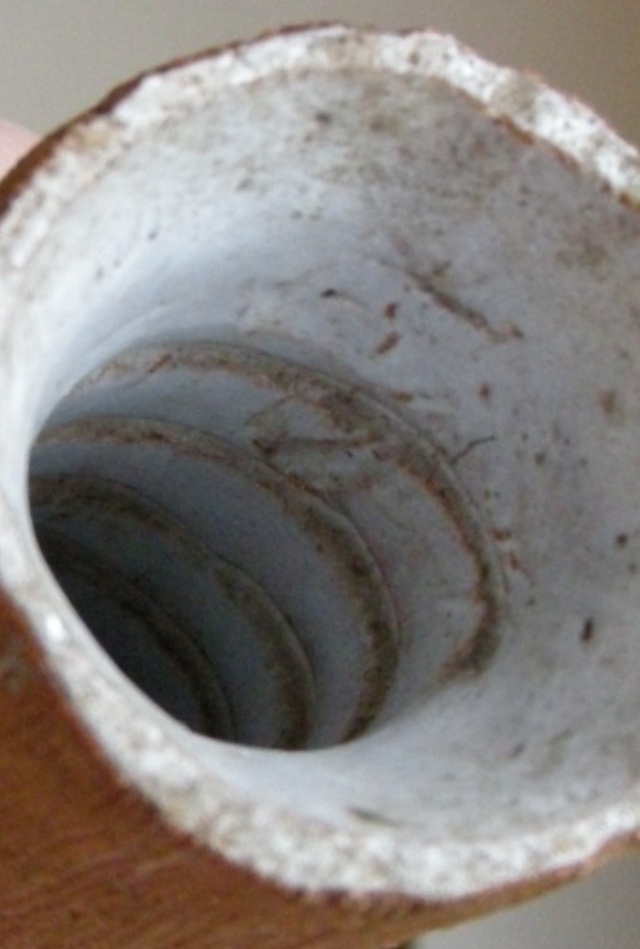 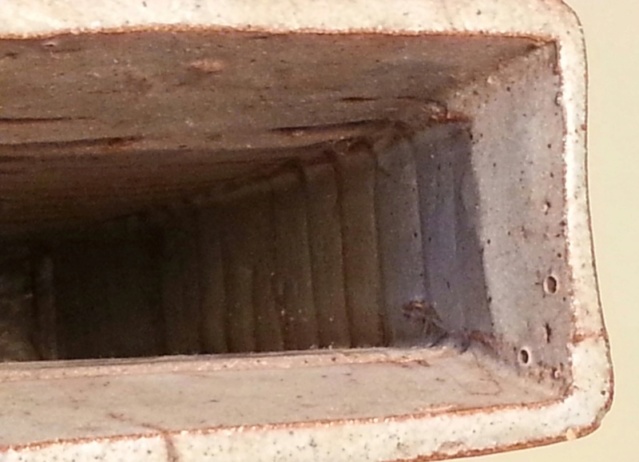 I'm guessing TC's pot was made using a form of some kind which left those very uniformed impressions on the inside of the vase
_________________
Making new friends as an adult is hard...because I don't want them.

Years ago I read somewhere that Alan Wallwork used coils of clay that were built up around on top of each other to make the vase. This would leave ring marks inside if they weren't smoothed out

I would say its Wallwork because of the concave base 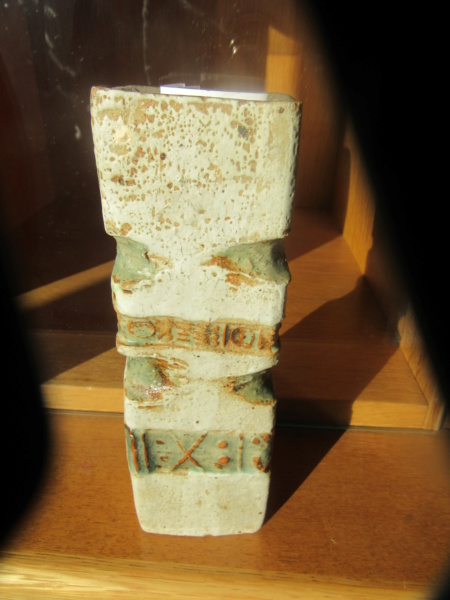 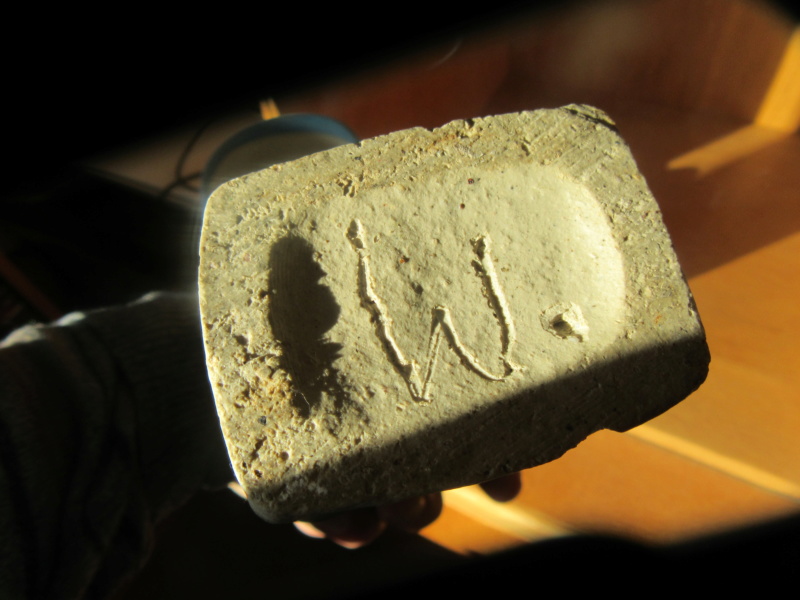 
This is ours. Bought from the Devon Guild at Bovey Tracey Devon, which was a major outlet for Alan Wallwork

Not sure that is absolutely correct. Back in the 1960s Alan worked in a very similar way to Hamada, although what they made wouldn't be confused.


What I mean by that is that Alan had assistants, who made the basic vessels and he would have made some too, depending on how busy he was. However, the decoration on them was done by Alan, the artistic bit if you like. So certainly a pot with a W is as much a pot by Alan Wallwork, as any Hamada pot is by Hamada and any old master painting is by the artist, who signed it.

Regarding the vase here, I wouldn't say with any confidence that it was made by Alan Wallwork. I did in the past have an unmarked vase that I thought could have been made by him but thought unlikely. However, when I showed it to Alan he told me he had made it, so I could be wrong but without Alan saying that it was his then there is always going to be a doubt.
_________________
Now you should know by now that Potty and I need to see your bottom - we're funny that way!