Is there any way of dating a St Ives standardware large jug , maybe by the general shape of the body or handle. Guess the mark gives no clues. This poor thing has had a hard life having areas of glaze loss around the rim , appears to have some age 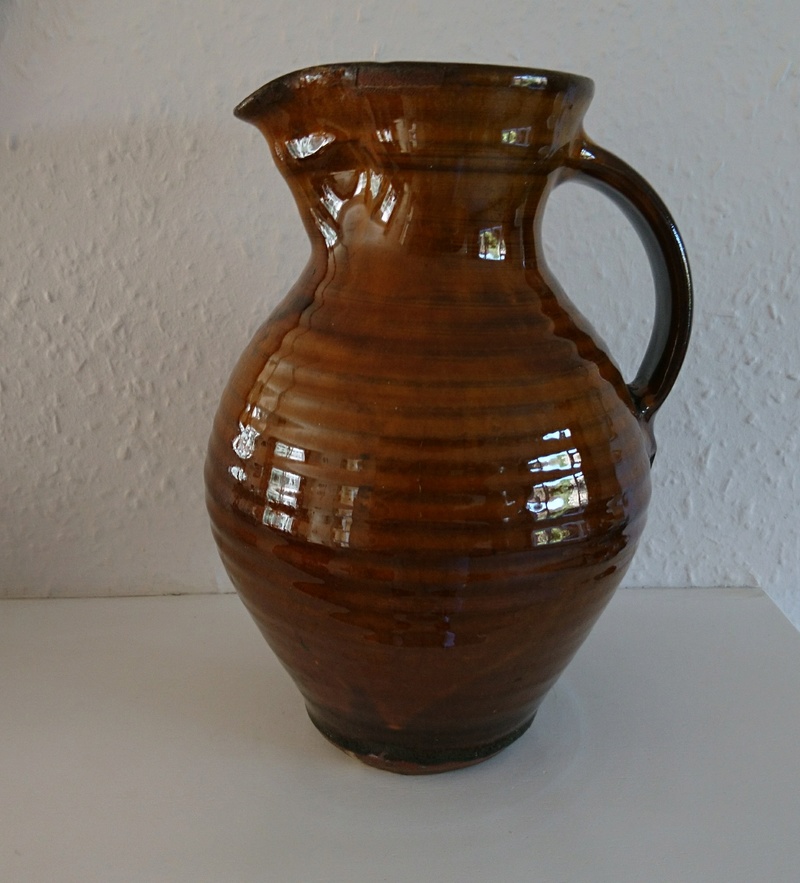 In theory it should be possible to form a timeline based on the shape of the St Ives stamps....but someone needs to put it together.
_________________
Just my personal opinion, take it or leave it.

The glaze loss round the rim might be a gaze fault called shivering, which happens during firing or cooling, at the time of manufacture, rather than a sign of age. This might be a fairly recent ‘second’ from the pottery.
_________________
Just my personal opinion, take it or leave it.

Interesting. Is that stoneware or earthenware? Its often difficult to tell from a photo, as they used a lot of different mixtures of clays in the early days. If it is earthenware its pre 1937.

I put up a standard ware catalogue from the early 60's some while back. Halfway down this thread. Might give you some idea in terms of dimensions, and were they making it then.
https://www.20thcenturyforum.com/t9954p25-leach-pottery-st-ives?highlight=bernard+leach

Thanks Philpot, I've seen a couple of the images of standardware including the ones you posted. This jug is definitely earthenware. Holds just over 3 pints. The neck is more slender than ones I've seen.
Bought it from a guy who had some items from an 80+year old man who told him it was his mother's stuff. But then....
The seller knew nothing about ceramics. Sadly I got to his table a while after the start of the sale and think may have missed stuff😣

Now that is a good find. You lucky person. It thought it might be early, at it has that look. How big is it? It becomes very interesting from hereon tho. Because that is a big size jug for back then. Unusually big. So who made it?
MMMMMMMMMMMM!!!!!!!

I hoped that was the case. The loss of the glaze is either side of the rim. It makes me think it happened over time maybe holding the jug under a tap 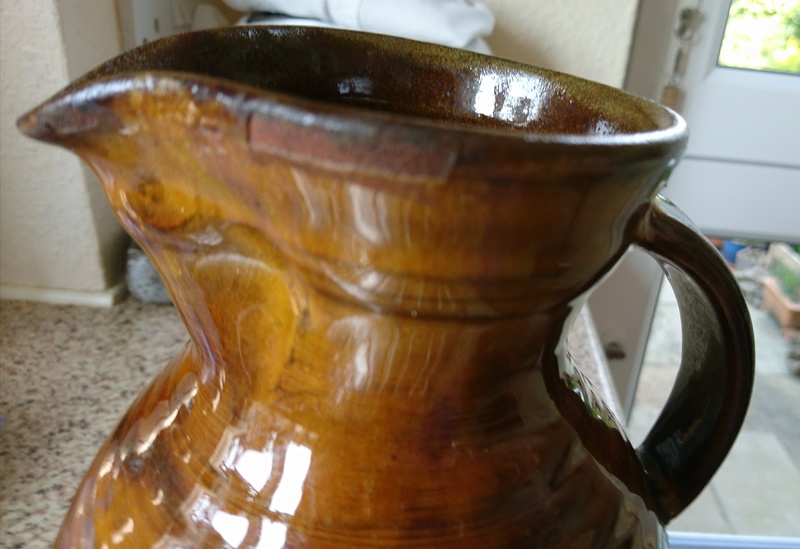 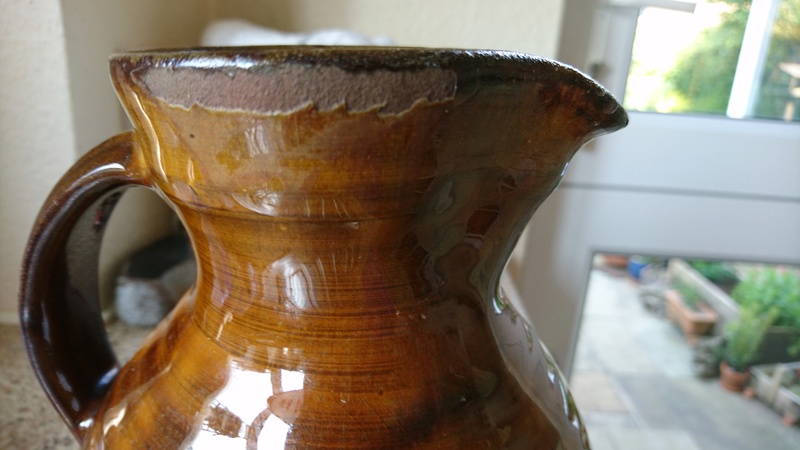 To me it looks like post-firing damage from being used, I believe the term is fritting, basically a bunch of chips to the glaze that did not penetrate the earthenware body. But I also think what caused this to happen so easily would have been from the glaze not adhering as well to the rim...

The Leach pottery in the early years was notorious for firing badly. They had a lot to learn. So could it be from those early years? Entirely guesswork really. On one hand, a piece this big would surely have had a personal mark? Lot of work going on there. On the other hand, there were vague versions of 'standard ware' in the mid 20's. Could this be one?
Most Earthenware you see from St Ives is generally from the early 30's, and mainly thrown by Harry Davis. Dear old Bernard went walkabout for a couple of years then, mainly off to Dartington. The Elmhirsts money was Very attractive! So Harry Davis was mainly left in charge, and he spent a lot of time and energy in experimenting with forms of 'standard ware' Now Harry, was a very, very good thrower. His St Ives items you see from the 30's are usually very well made and of excellent form. But is this of 'excellent form'. Looks a bit rough and ready.
Its all Ifs and Buts, and guesswork. My advice is to hold on to it for a couple of years. Its the 100th anniversary of the Leach St Ives pottery in 1920. Items like this will the be considered 'genuine antiques', and of course they will assume ever greater significance.
Oh Lucky you..........!

I think fritting is where an impurity or larger than average piece of grogg pops under the glaze, pushing it off and forming what looks like an impact crater. If this was damage from use, the glaze around the top of the rim would be missing too.
_________________
Just my personal opinion, take it or leave it.

Looks like a glaze and clay colour used by David Leach - eg. when he started Aylesford Pottery, which might help to date it.

Aylesford start was 1954. That is several decades later than this piece.

Does the damage to or fault in the glaze massively affect value in these old pieces would you say?

Many of these pre-War pieces have the kind of damage seen here due to what philpot has written above. Collectors of earthenware are more accepting of damage than collectors of stoneware and porcelain, so it will have some effect on what someone might pay but not significantly. If this was a piece of stoneware Leach Standard ware in this condition then it would be pretty much worthless but this will have value.
_________________
Now you should know by now that Potty and I need to see your bottom - we're funny that way!

There is a lot of obvious damage, so, yes, it will affect the value and reduce the number of collectors wanting it. Plus it doesn’t have a potter’s personal mark which will also reduce its value.
_________________
Just my personal opinion, take it or leave it.

Value is always relative. If this could be specifically be dated as an early piece-first five years or so- then the very damage is part of the narrative. Damage was common. If its a early 30's piece, then damage is a lot more significant, as they had sorted the kiln out by then, and 'perfect' was the norm.
Whatever.... their very rarity gives them value.How much is almost entirely down to the market at the time.
Snapshot.https://www.woolleyandwallis.co.uk/Search?q=leach earthenware

Thanks for all your thoughts. May not keep it for 2 years. As it cost so little may try the market soon

NaomiM wrote:I think fritting is where an impurity or larger than average piece of grogg pops under the glaze, pushing it off and forming what looks like an impact crater. If this was damage from use, the glaze around the top of the rim would be missing too.

This is relating to Chinese Porcelain, but this is how I understand it, but it could be wrong!

"or to have been cracked open by a soft impact, which would not otherwise have damaged the porcelain. " Is what I think happened to this jug, i.e. was sold being "perfect" but due to the glaze having an unseen fault, the galze came away with light impacts over time.

I'm getting a bit Sherlock now