These are "copperette" items, designed c1907.
The LH item is known as a "quaint".

Very similar to the Clanta vase but not stamped the same. 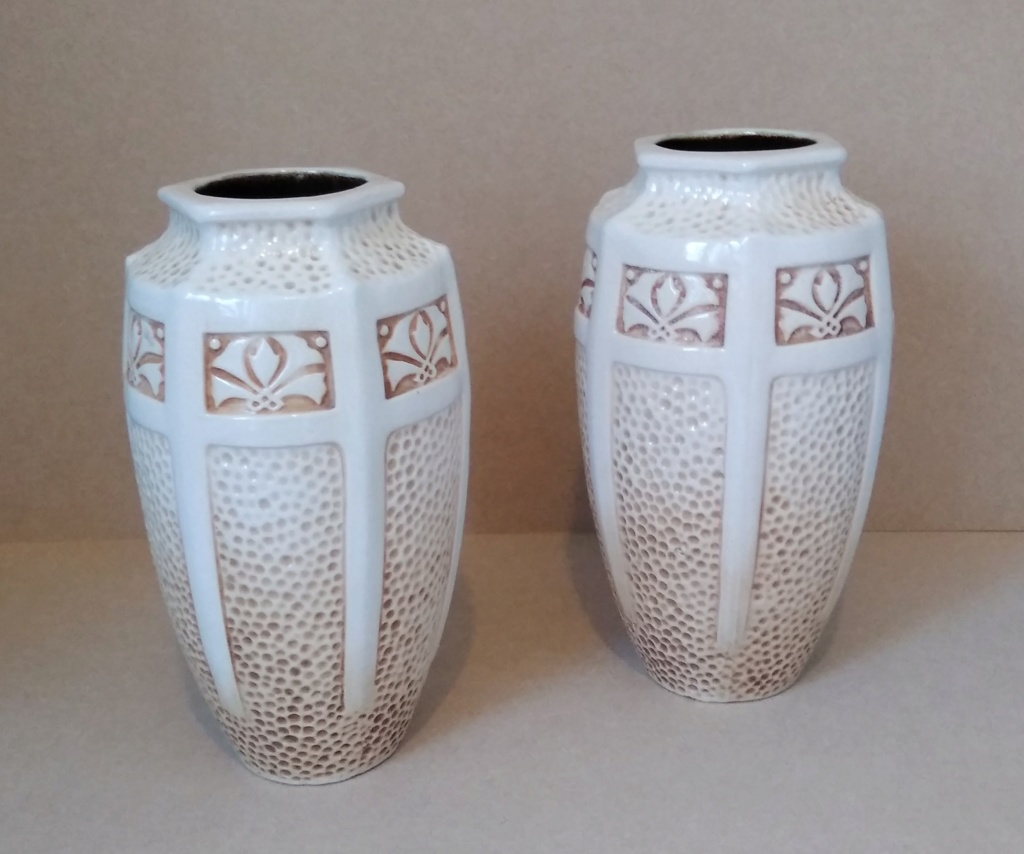 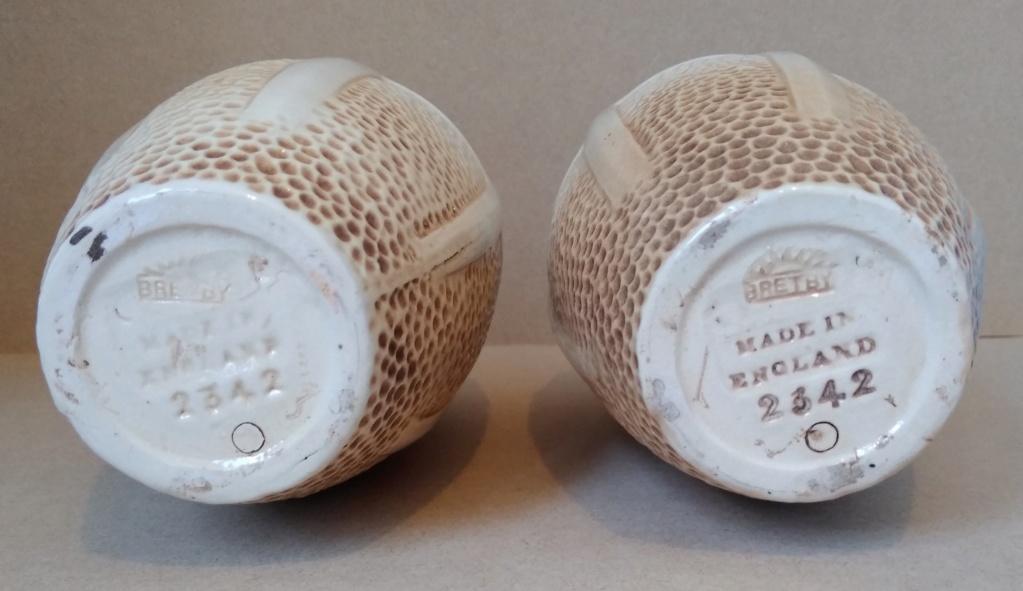 Thanks, I know Bretby is difficult to date and the pattern numbers don't always go in date order!?

Yes the shape numbers (if the piece has one) are documented,
but they did thousands of designs.

Hello - I’m new around here. I pick up bits and pieces here and there and would really like to learn what to look for, to pick up those more expensive pieces. My first half decent find is this Bratby bowl. I was able to research the era (1920’s). I’d be appreciative of any more info and whether or not this particular piece is common or worth anything to a collector. The letters LS are near the number, I’m not sure what these mean. . Thank you. 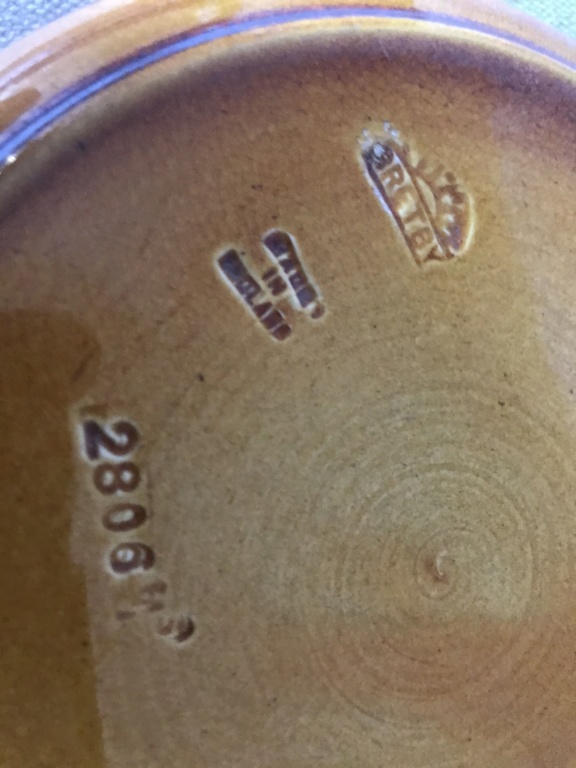 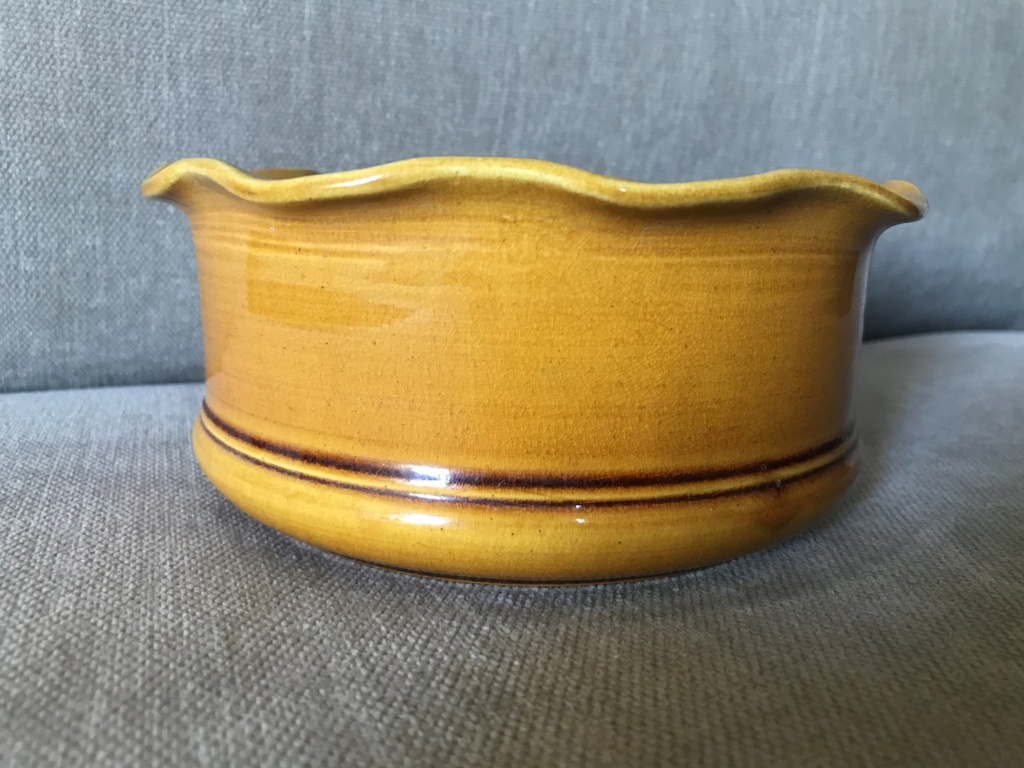 Bretby has fallen out of fashion these days so not particularly collectible, even though there are some lovely pieces out there. Best to check sold and completed listings on eBay for an idea of what buyers are prepared to pay for them.
_________________
Just my personal opinion, take it or leave it.

Thank you for your opinion. I had checked Enay, however only a small number of items are listed and non like my piece. I may just take a gamble and list and see what happens. Thanks again.

Akelly84 wrote:Thank you for your opinion. I had checked Ebay, however only a small number of items are listed and non like my piece. I may just take a gamble and list and see what happens. Thanks again.

One of the reasons that we don't give price suggestions here is that they change continuously and will always depend of where and who is selling a specific piece.

I am old enough to remember the days when "Art Pottery" was popular here in the UK and I used to sell it myself. Even back then Bretby, which falls into this category, was not well regarded and it was only some of the earlier pieces that were sought after i.e. before 1914 but especially 19th century pieces.

Your bowl appears to me to be part of the Nerton Ware range that consisted of glaze effects and the colour is probably what was described as "Gold-stone". This range was brought into production in 1920 but the shape number code on the bottom of your bowl suggests to me that your piece is post 1925.

I suspect that your bowl will sell to someone that likes the shape and the colour rather than a specific Bretby collector, if such a person exists.
_________________
Now you should know by now that Potty and I need to see your bottom - we're funny that way!

While tidying up I came across the following story: -

It appears that when Neville Chamberlain went to Munich in 1938 for his famous/infamous meeting with Adolf Hitler he took along a Bretby jug in the shape of George VII as a gift for Hilter. This jug when raised played the national anthem and it is said that Hitler was delighted with the gift. So much so that he instructed that it was taken to his air raid shelter when alerts occurred.

denbydump wrote:Shape No2806 was introduced in the early 1920s.
I would suggest it is a bulb bowl.

Some years ago I was able to find out that shape 2326 was introduced in 1924 and I suggested post 1925 for this bowl as I have assumed that shape numbers got higher the later they were introduced. Obviously, that assumption might not be correct.
_________________
Now you should know by now that Potty and I need to see your bottom - we're funny that way!

Thank you for your knowledge sharing, very much appreciated. I love learning about the history of these odds and sods I come across. The Hitler story is interesting, even if unverified, I’ll run with that.

Assuming the numbers are consecutive, 2326 would be during WW1.
From the basic guide given in the Bretby book.

Thank you Denbydump - for the shape and clarification of bowl shape as well, really useful to know. I just adore the colour.

denbydump wrote:Assuming the numbers are consecutive, 2326 would be during WW1.
From the basic guide given in the Bretby book.

I was going to write that I couldn't remember where I got my information about 1924 from, which is still the case but I have found the following quotes. These come from the Encyclopaedia of British Art Pottery by Victoria Bergesen (edited by Geoffrey Godden) published in 1991.

These are direct quotes from two editions of The Pottery & Glass Trade Review at the time: -