Hi All,
I'm wondering whether anyone has seen one of these table lamps anywhere, and can offer any information about the origin or manufacturer?
I was told when I bought it that it is attributed to Pierre Guariche, but I think
that is very unlikely. It was apparently originally bought in France, but again I
can't verify that. I haven't been able to find an image of a similar one anywhere.
Any help gratefully received!
With thanks
Rob 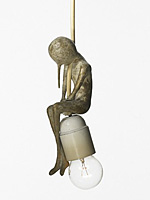 Hope these are of some use - please let me know if I should photograph any particular detail or angle.
Thanks

To me it looks like a custom made lamp by someone. Shade does not fit. Can you show me the base underside, or maybe inside base? Is the lamp looks painted?

Here's the base underside; nothing much to see. I can't see an easy way to get at the inside I'm afraid. I was told when I bought the lamp that it was enameled, but on closer inspection it rather looks like a paint job.

Well thanks for taking the time to take a look