There were several moves and changes of mark that help to determine the date of Bernard Moss pieces. The pottery mark in 1954 was Mevagissey Pottery, but changed in 1956 to Moss Mevagissey when the Mosses and their young family moved to Jetty Street. The predominant colour of the models was terracotta until 1960 when it was changed to blue. In 1961 there was another move, this time to The Old School House in St Ewe and the mark changed to St Ewe Moss. While at St Ewe Bernard changed from making his figures to thrown studio pieces and domestic wares.

From 1965 to 1972 the pottery was at Pentewen, and the mark was Moss Pentewen, and then from 1972 to 1977, Castle Gate, Penwith, near their old friends Christiane and Anthony Richards. At this time the mark changed to Moss Cornwall. 1977 saw the circle complete with a return to Cliff Street, Mevagissey, and a reversion to the 1956 mark, Moss Megavissey. 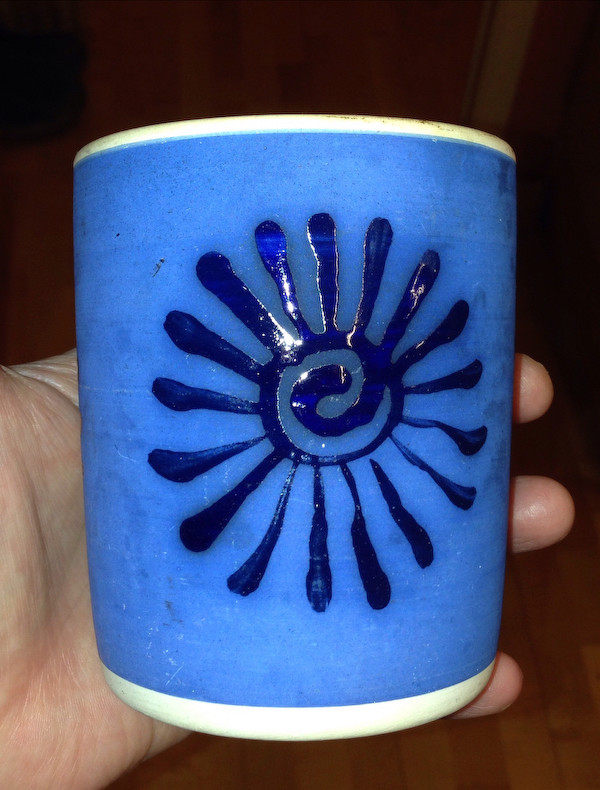 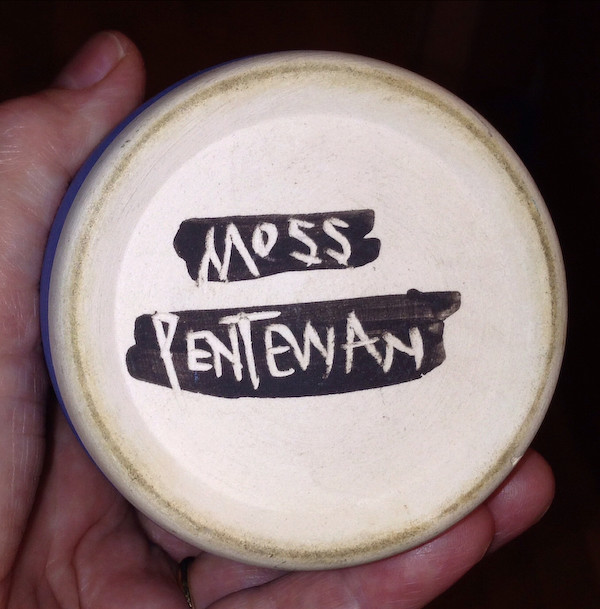 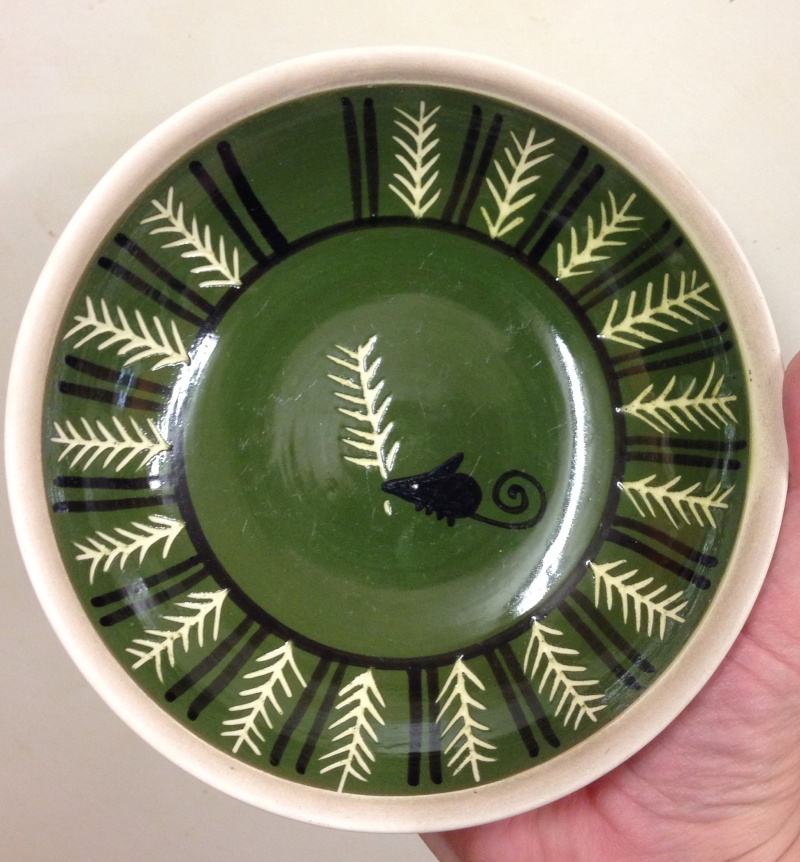 I've just found this in a box of stuff in the garage, what it's doing there I'm not sure. I think I bought it a long time ago and packed it away. Now I'm nurturing an interest in pottery I'm just pleased it hasn't been damaged! I've been looking on Pottery Studio.com and it dates this Bernard Moss mark to 1956 but says he changed to using blue in 1960. Can anyone advise if I'm on the right track...plus I wanted to show this to the forum as I've been unable to find this pattern on my search.
It's about 16cm wide. 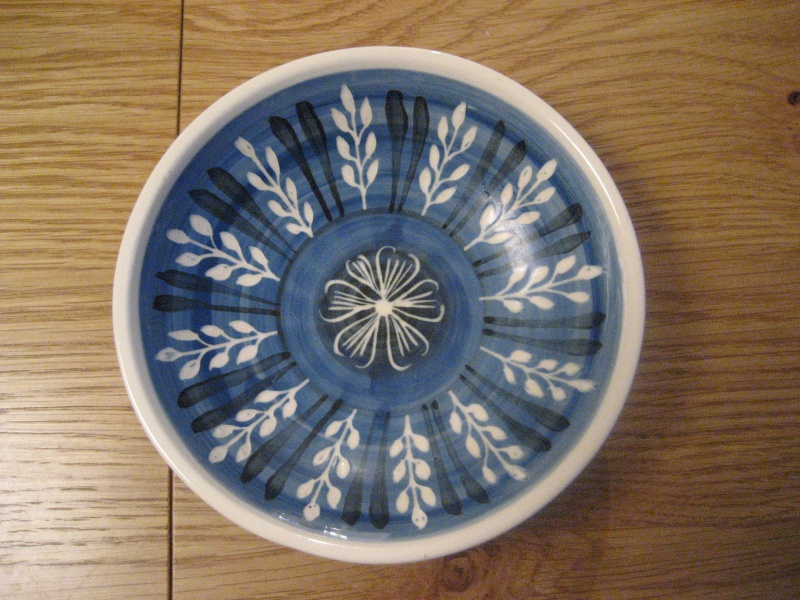 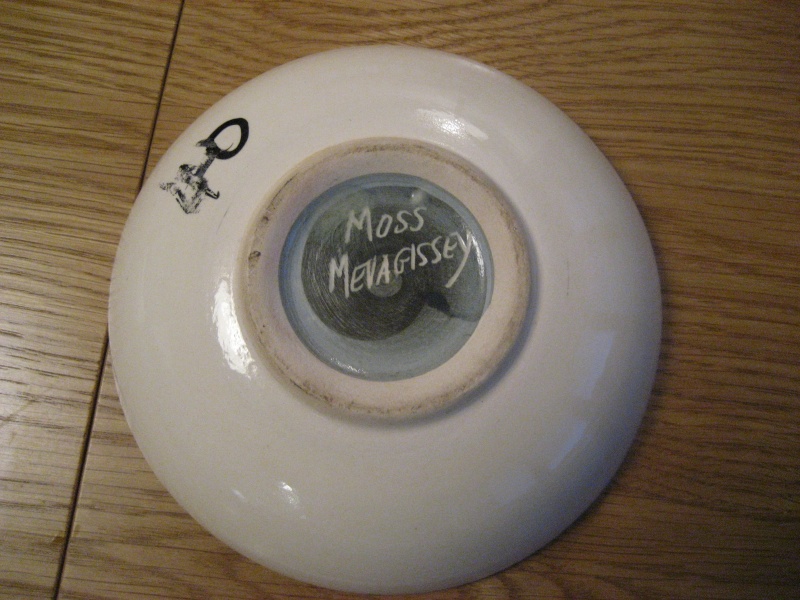 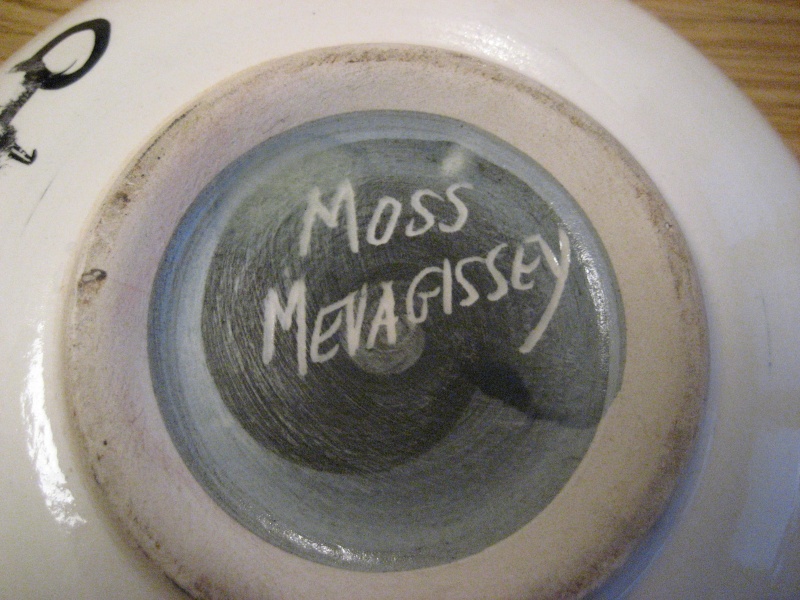 As I read it he was using terracotta models before changing to blue, but I don't know if they're referring to the clay or glaze.

Thanks Naomi, you're right, on re-reading I think they were making the figures in 1956 which later became blue. It looks more like the later 70's mark for studio pieces and domestic ware.
I've just seen on worthpoint.com a dish with the same pattern but in olive which was done in the short time in St Ewe, but it doesn't say which mark it has. Confusing!

There are several beakers with the Moss St Ewe mark on Google images and they have a similar black over sgraffito mark as my beaker
_________________
Just my personal opinion, take it or leave it.

A small but likeable pot decorated with fish. It looks as though there is lime scale, making the image slightly hidden. Size approximately 8 cm in diameter 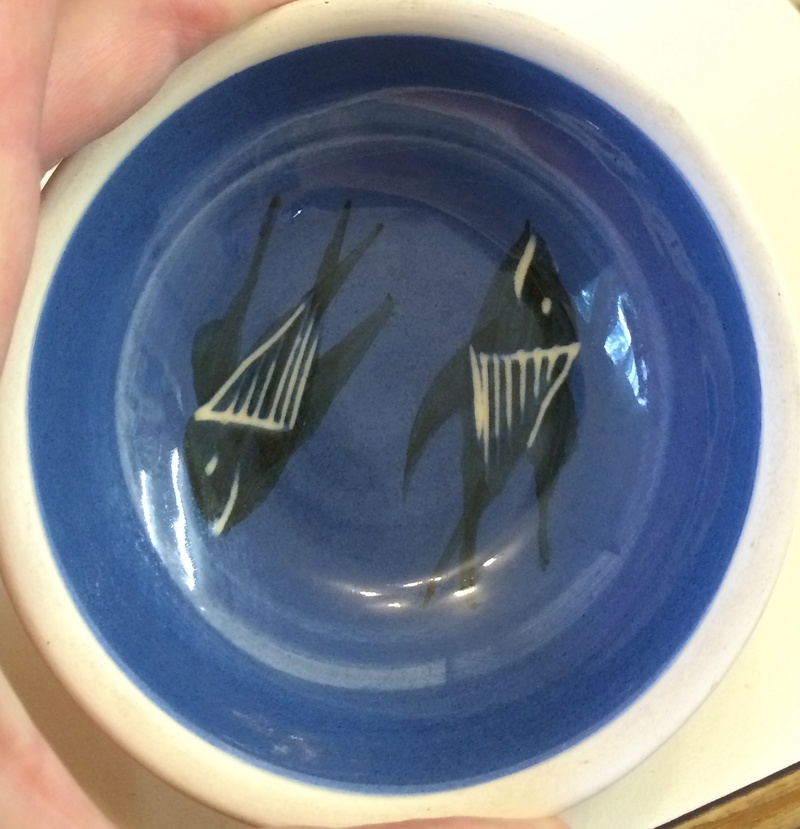 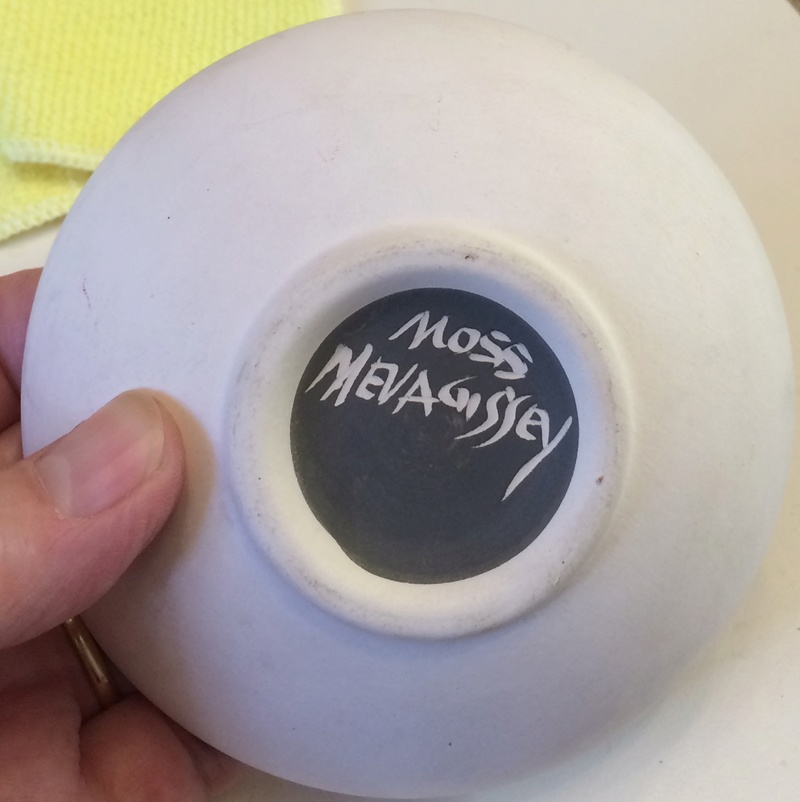 Ohhh, been watching him sell on eb recently, crazy prices ...every ones a winner... 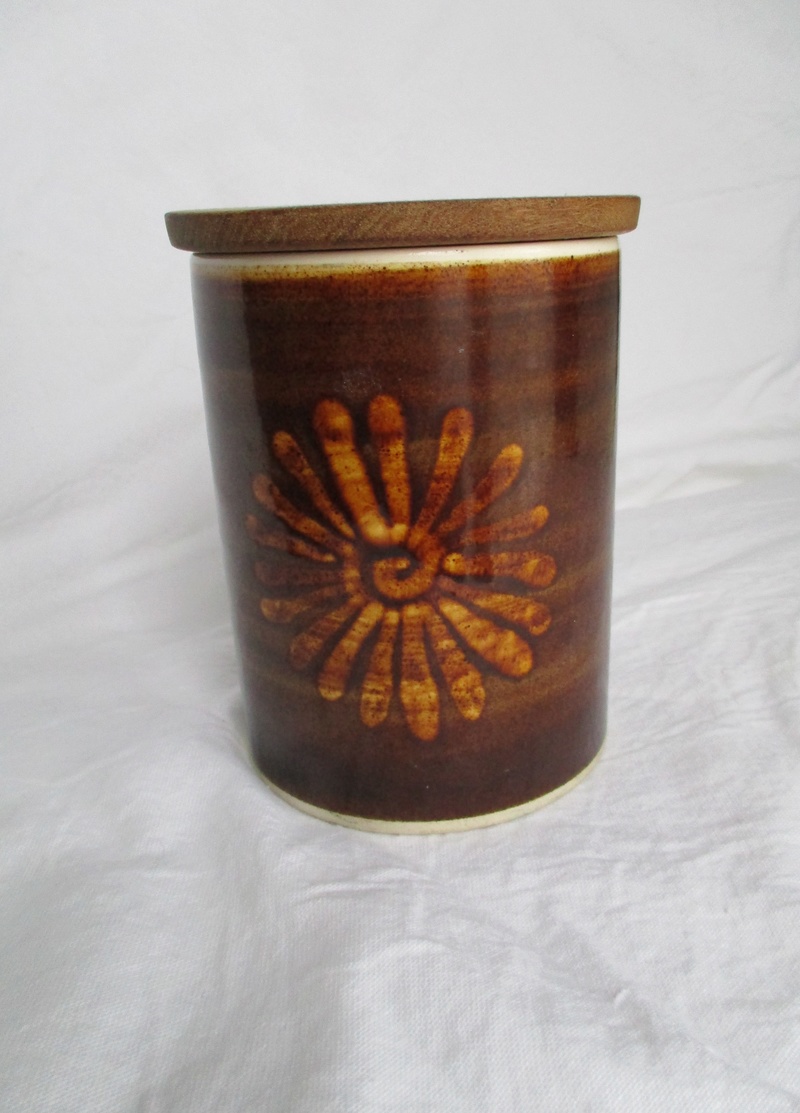 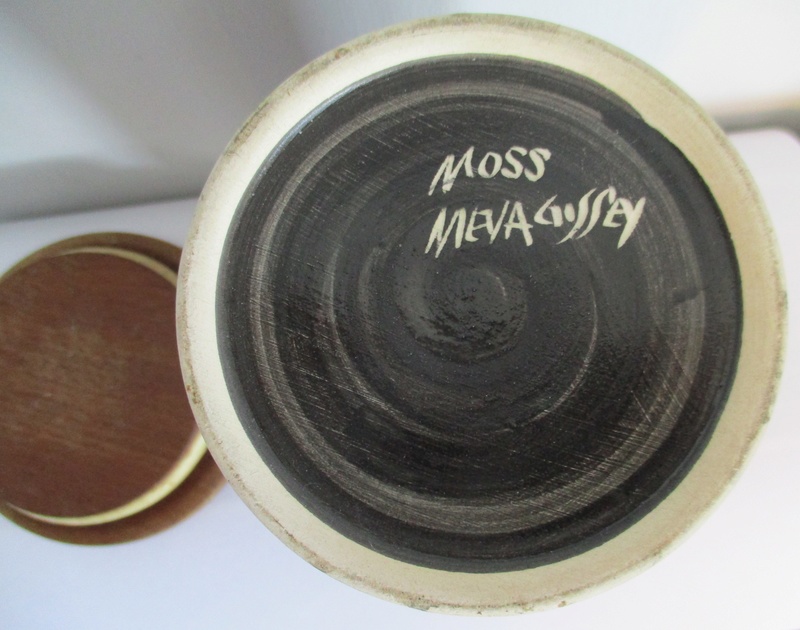 I think it’s by Bernard Moss 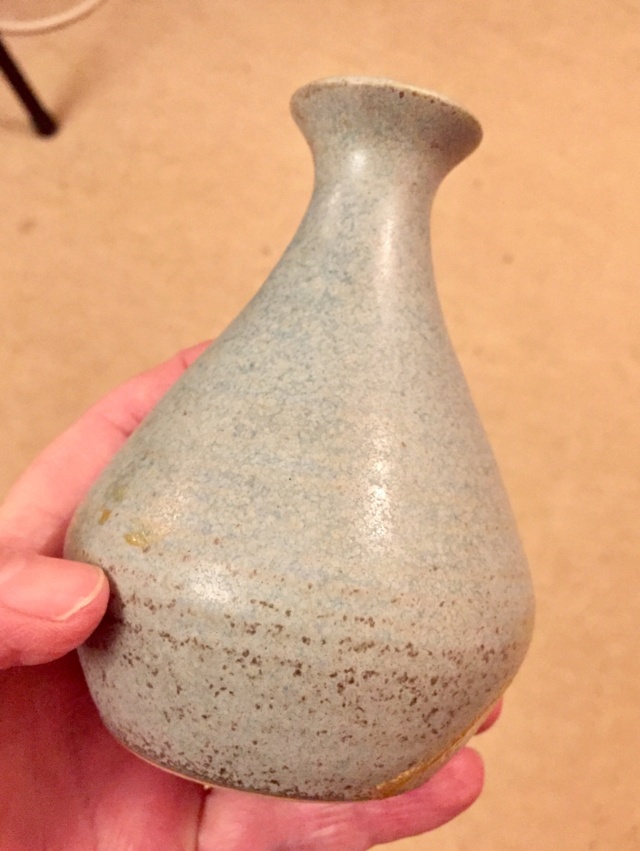 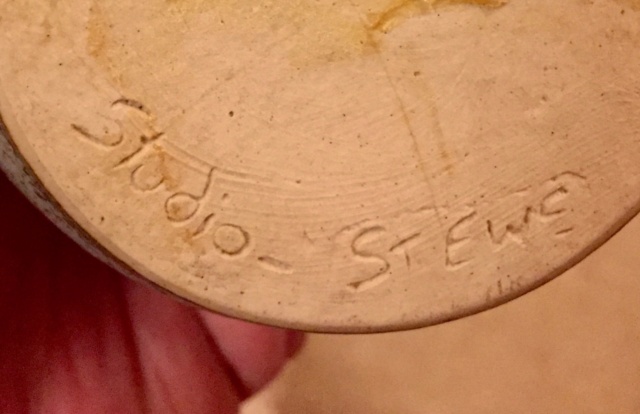