Milk jug. Textured outside, glazed inside. Mark is a sloping N with a dot above. 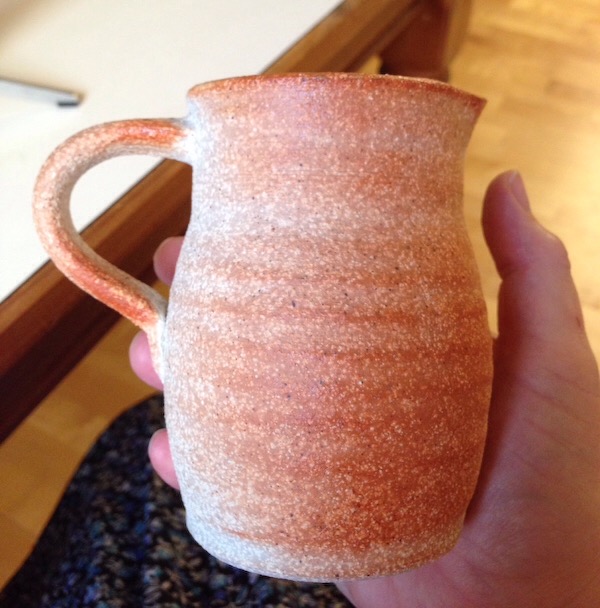 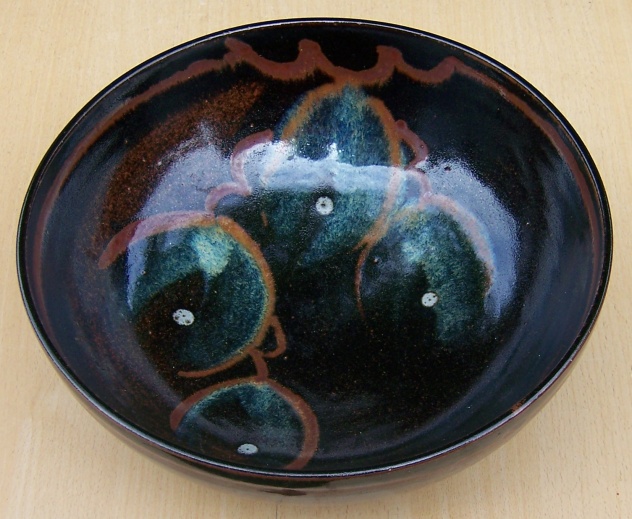 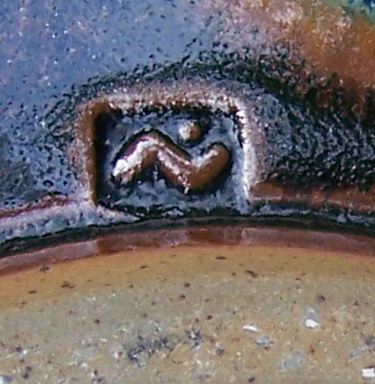 Beautiful glaze on your bowl.

Rather mundane in comparison, a miniature salt-pig, 3.5 in high. 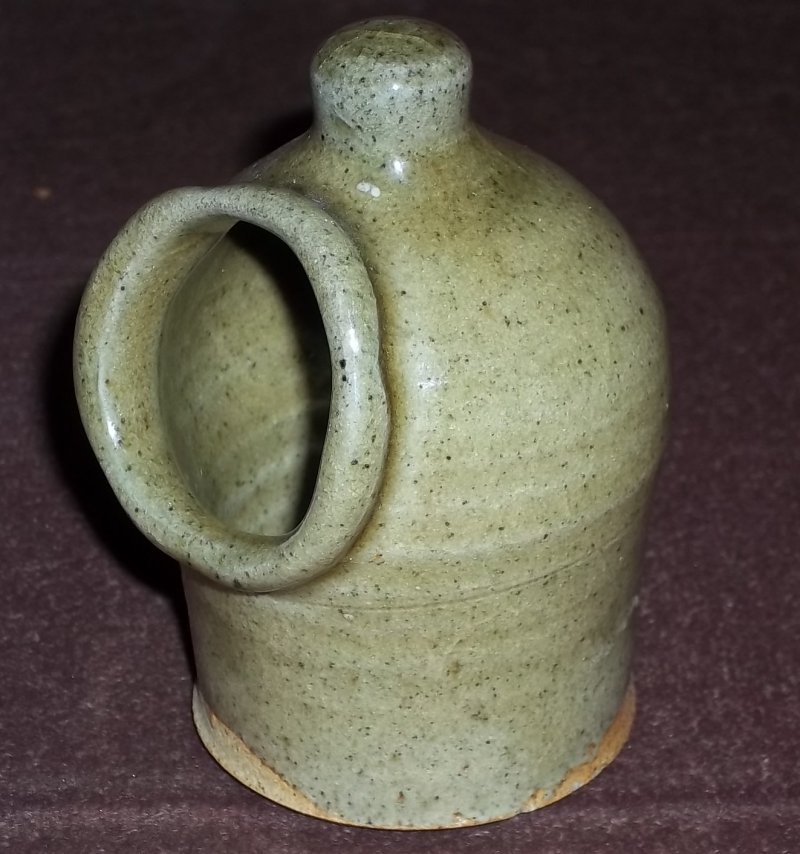 27cm wide. Yellow slip decoration. The mark is one I'm having trouble finding, could you help please? 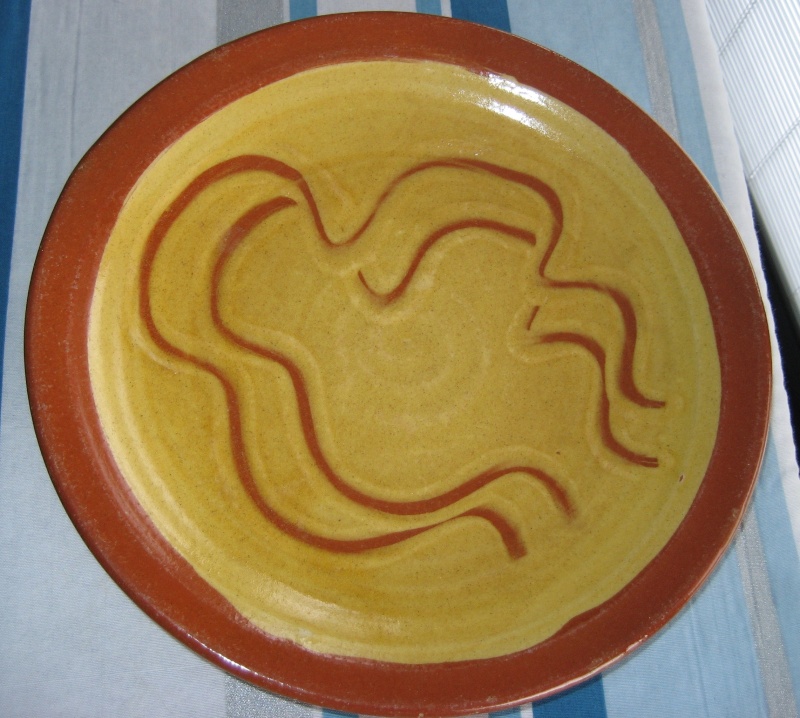 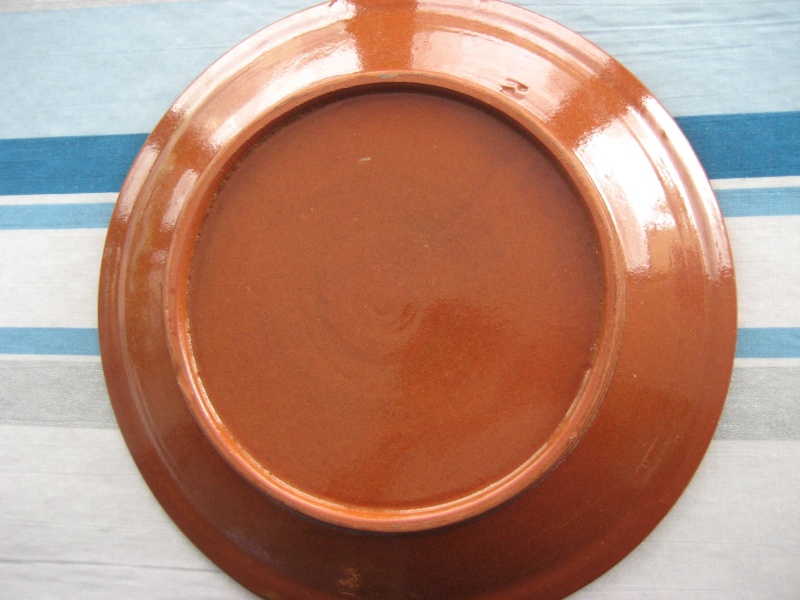 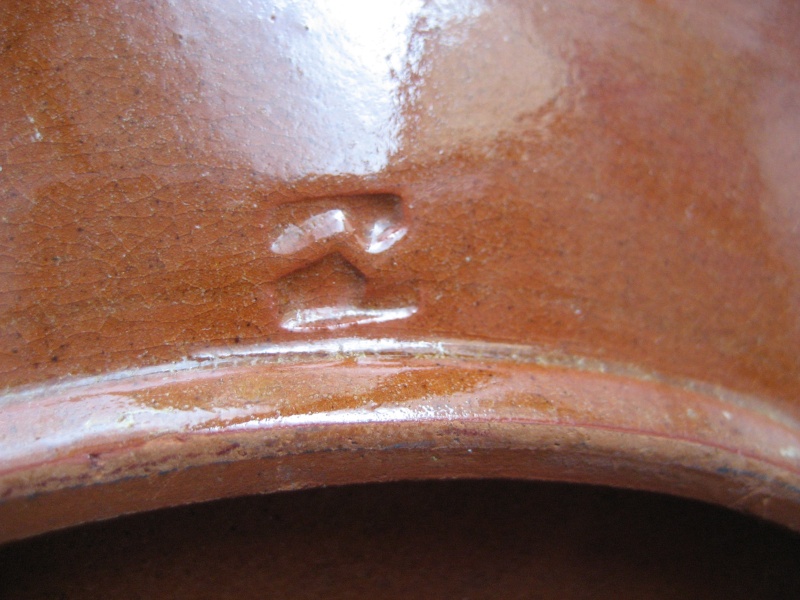 It looks like his early mark (1968-76) when he was making earthenware as well as stoneware so it fits. I haven't knowingly seen any so can't be certain but he is still around, so you might be able to get him to confirm 100%.

I'll contact him, I'm sure he won't mind if I ask. Thank you.

I emailed Douglas Phillips about the plate. He replied and said that it is his plate, and a fairly early one, made at his first pottery at Ridge near Chard, Somerset. He goes on to say that the clay was from Donyatt, which he dug himself. He only made this earthenware '69-'71, after the large oil fired kiln he built in 1968 proved not to go to stoneware temperatures. In 1971 he built a smaller oil kiln that did go to high temperatures so went back to making stoneware pots.
He said there probably aren't too many of these plates around.

Thank you Naomi and SP for very accurate info!

The best bit is that you contacted him and got information that I suspect isn't written down elsewhere........... so thank you for doing that and sharing it with us.
_________________
Now you should know by now that Potty and I need to see your bottom - we're funny that way!

Hello, this small salt pig has a makers mark which I wondered if anyone recognised? Many thanks :) 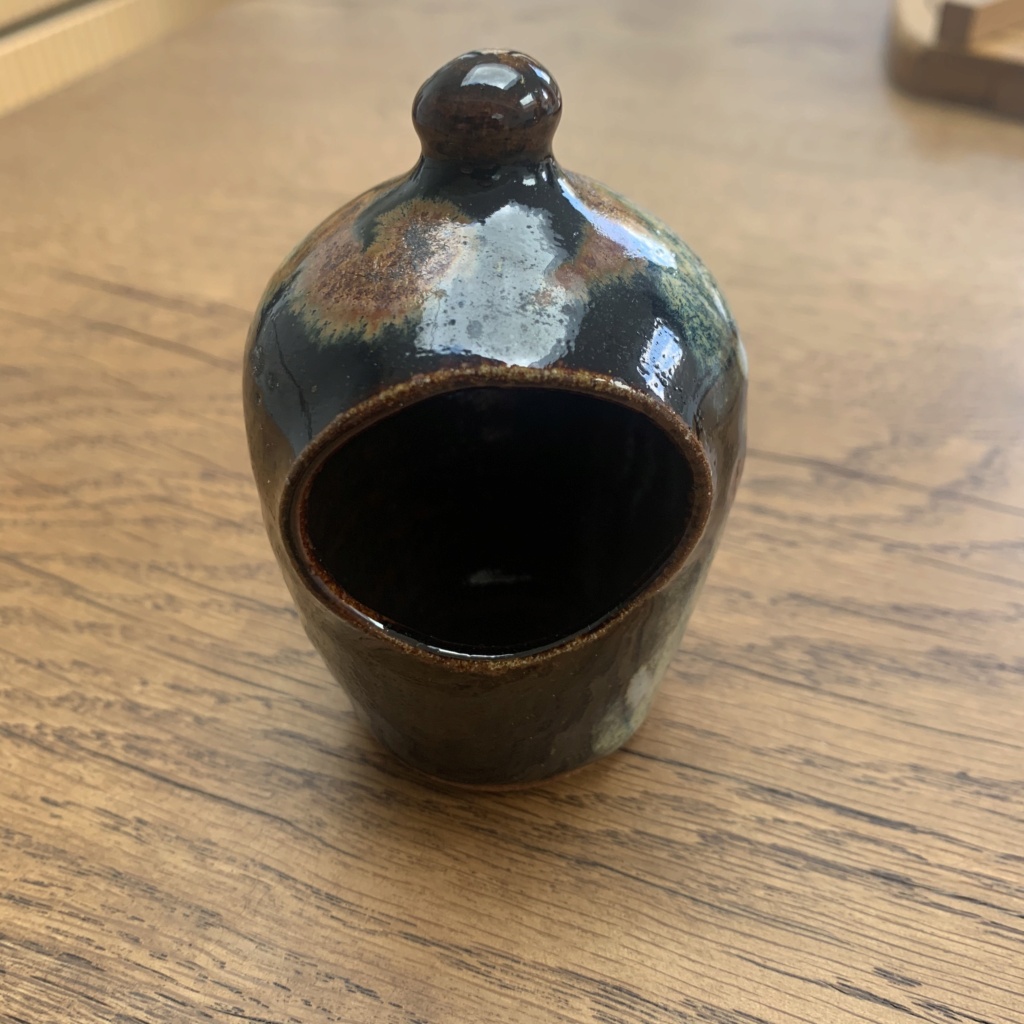 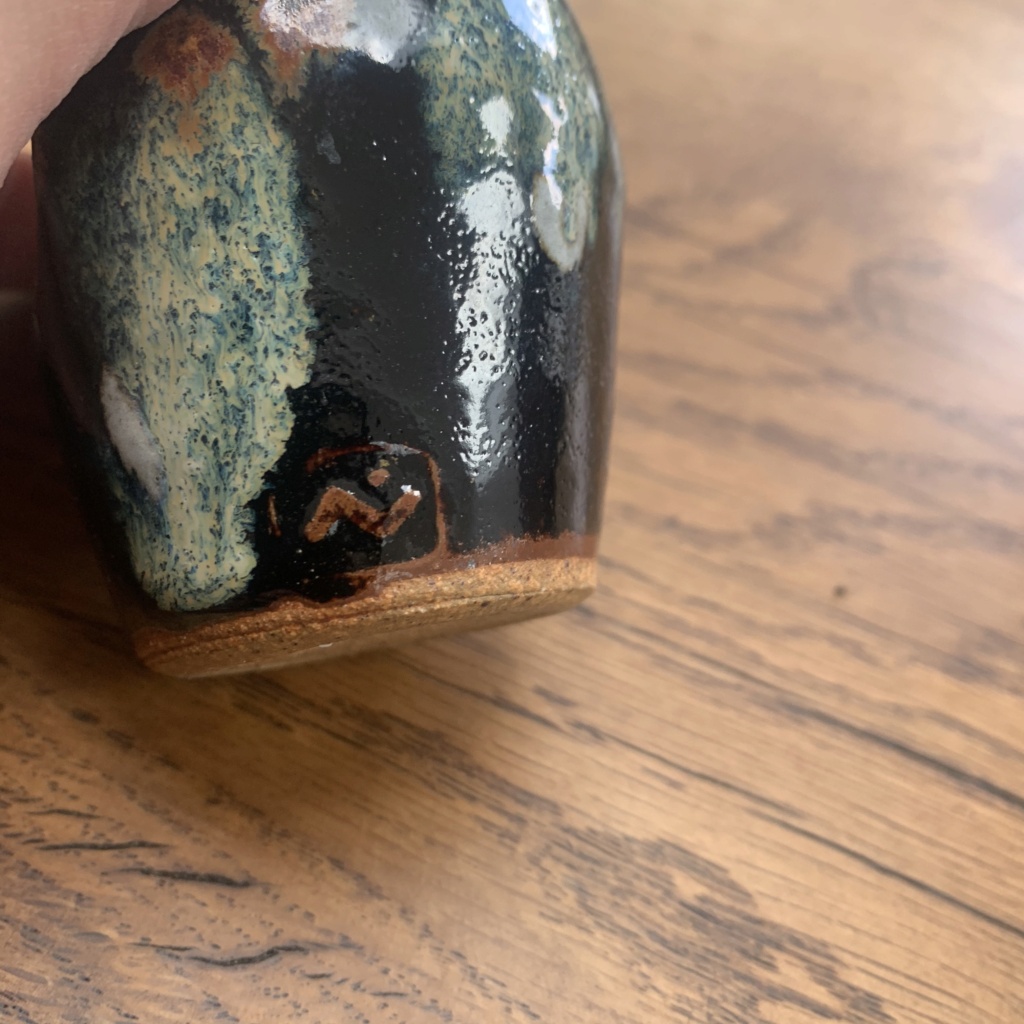 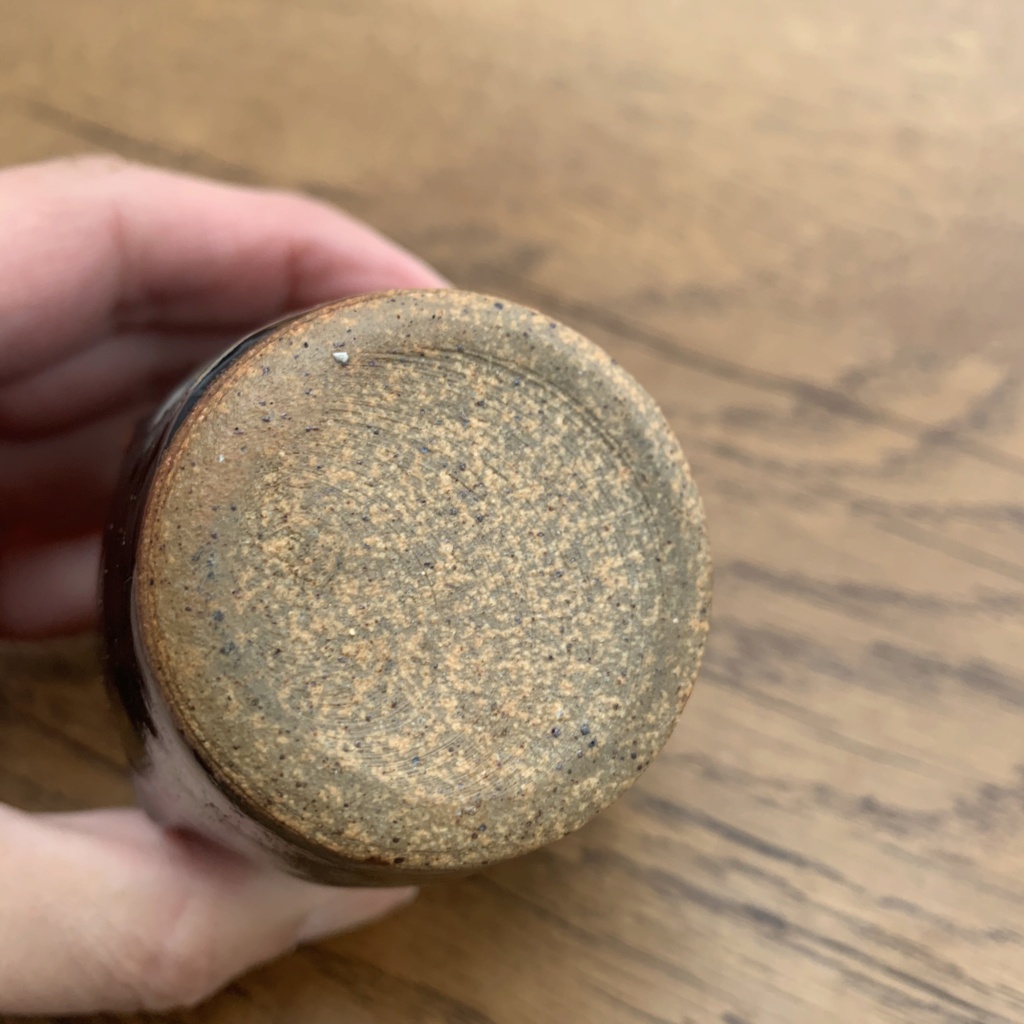 A general request to members to use the 640 px width setting when uploading photos, so as to keep the image inside the comment box.
_________________
Carrot cake is just fake cake

Thanks Naomi :) I'll remember to select 640 px for the photos going forward