Have this rather nice 34 cms diameter stoneware charger and hoping for some ideas on maker. Seal looks like either a stick figure or  a star in an oval. All suggestions appreciated John

Not familiar with his work but it could be by Harry Barclay, who potted in Yoxford, Suffolk from 1974 to 1996. He made reduced thrown stoneware like this is and the mark appears about right. Can't be certain though.
_________________
Now you should know by now that Potty and I need to see your bottom - we're funny that way!

Mark certainly looks close and this was bought in Essex so not that far from Yoxford.
Thanks John 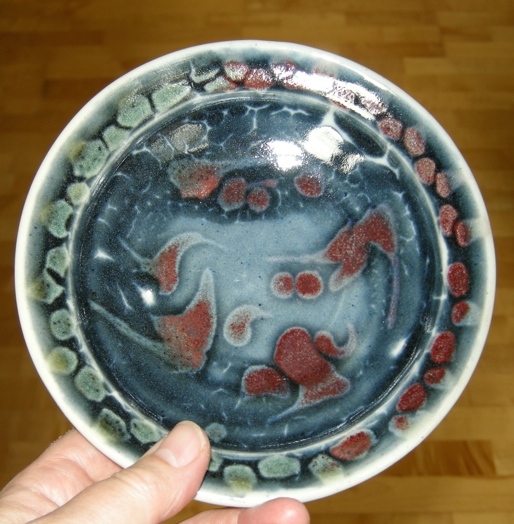 Small plate by Diana Rose, marked D for Diana and a second mark that looks like a wheel with 5 spokes (Biddy's mark is similar,  but more like a flower with 5 petals, and a B stamp)
Based at Milestone House Pottery, Yoxford.

Studio pottery vase brown, russet and beige, 17cms high,  marked on the bottom with what looks like a star in a circle. 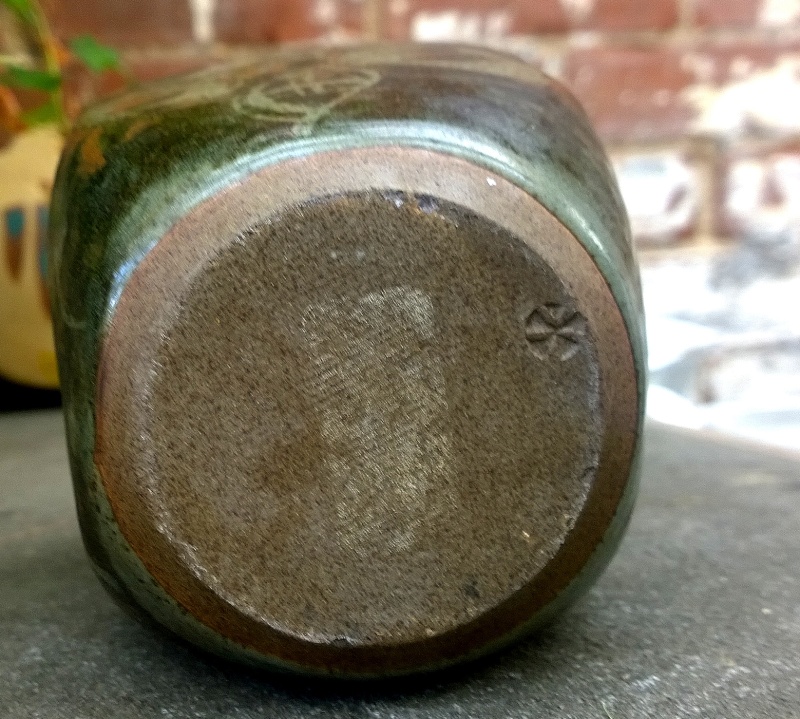 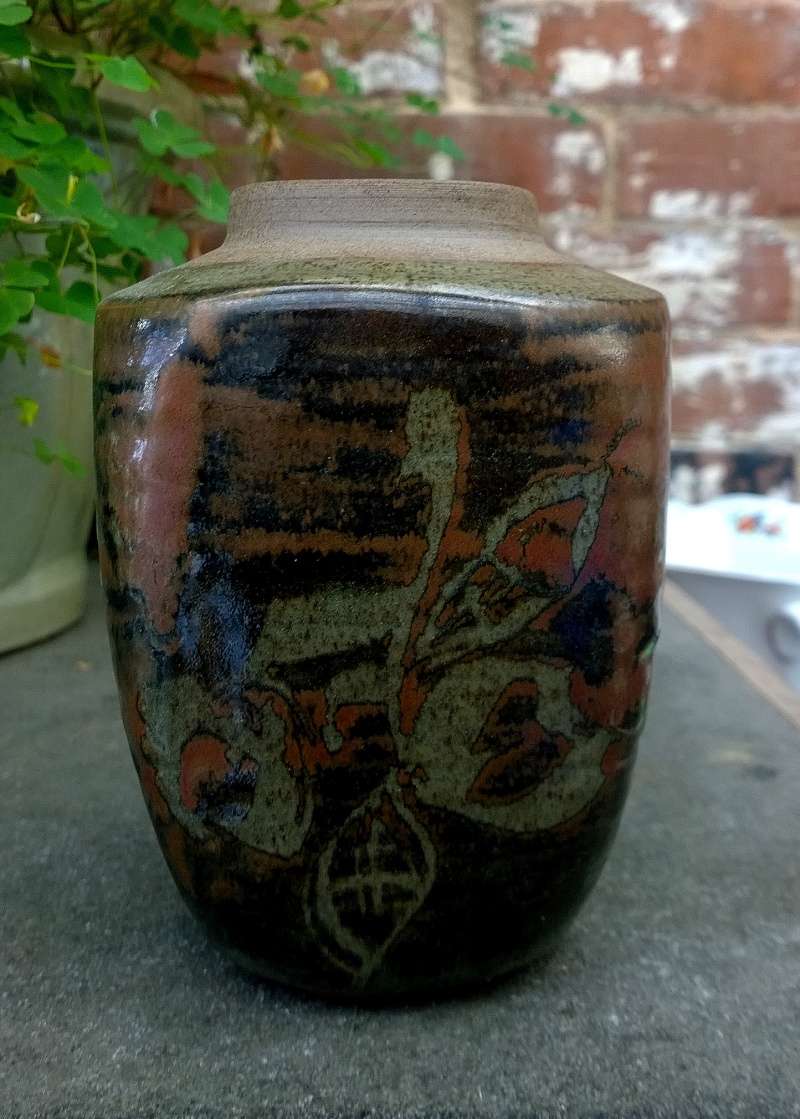 I might have the lid somewhere, will have to have a hunt. I remember something that might fit. Thanks for the info.[/i]

It does appear that Harry Barclay, Biddy Rose and Diana Rose all worked at the Milestone House Pottery during the dates 1974 to 96. A five pointed mark was used by all of them but it seems to have been slightly different in each case. However, it does appear that they all had personal seals (stylised H, B and D), which they used for individual pieces alongside these marks.

I do not know how well the five pointed marks match the diagramatic illustrations that I found but: -

Harry's mark gets thicker as it goes out.
Biddy's mark are thicker in the centre - like petals.
Diana's mark goes to a point like a star.

That is why I believe that this stamp was the one that Harry used rather than either of the two women.

I suppose without known examples of each it is difficult to be 100% certain, who stamped the bottom of this jar. However, I think we can say that it was made at the Milestone House Pottery in Yoxford, Suffolk.
_________________
Now you should know by now that Potty and I need to see your bottom - we're funny that way!

Coincidentally I picked up this little jug by Biddy Rose (confirmed by her personal stamp) at a local car boot last weekend; the petal shape is quite distinct. The "arms" in the stamp on Sukraine's pot appear to get thicker toward the end, which would rule out Diana. So my money is on Harry.

Could it be Biddy Rose and Diane Rose.

A few Diana Rose pieces I have collected 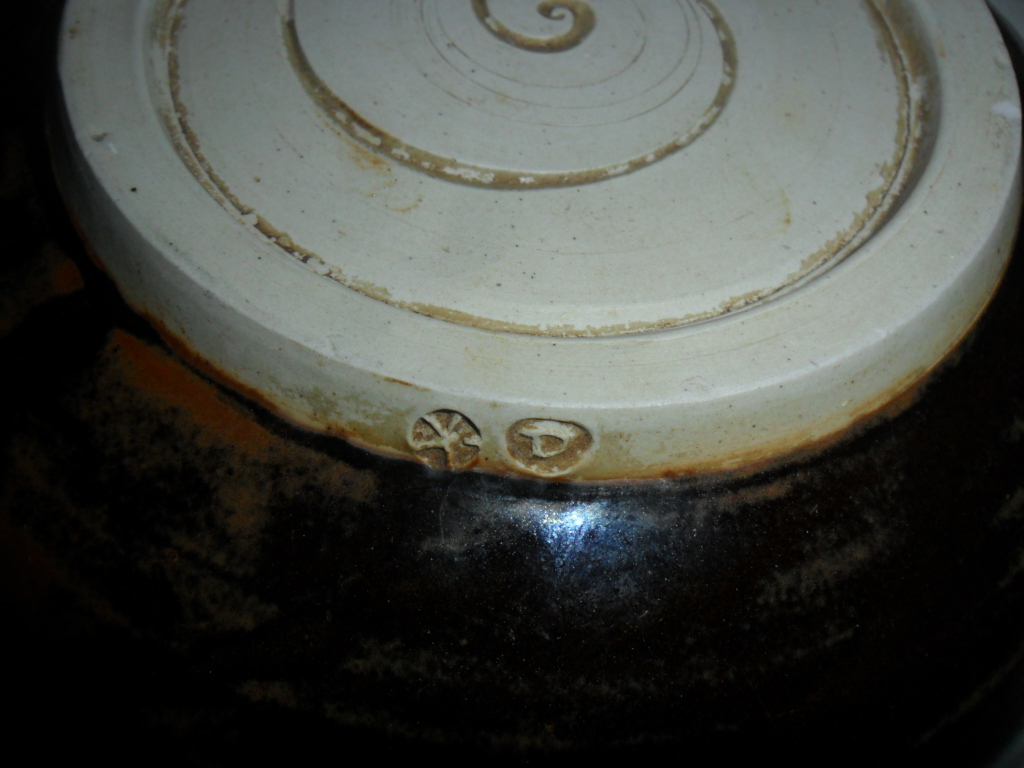 "Beginning pottery classes in 1965 in London, in her fifties, she moved later to Essex and bought a second-hand wheel and kiln. Di and daughter Biddy set up Milestone House Pottery in Yoxford, Suffolk in 1974....."

The obit is signed "Biddy Barclay", so presumably Harry was (or became) a relative by marriage. 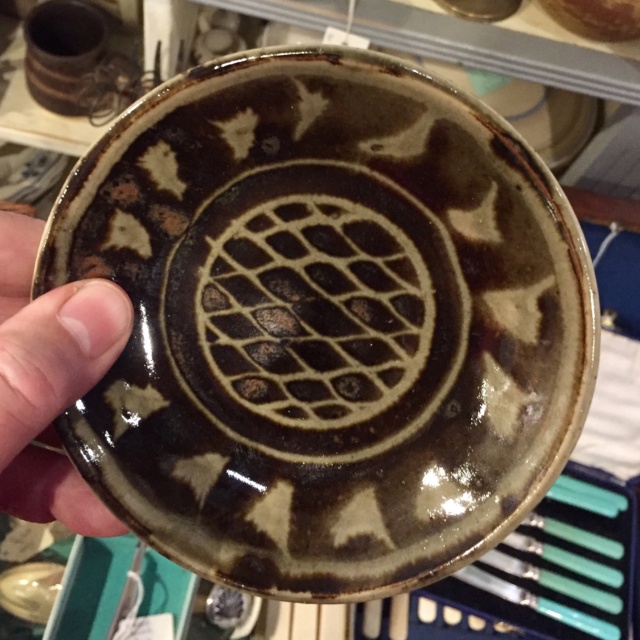 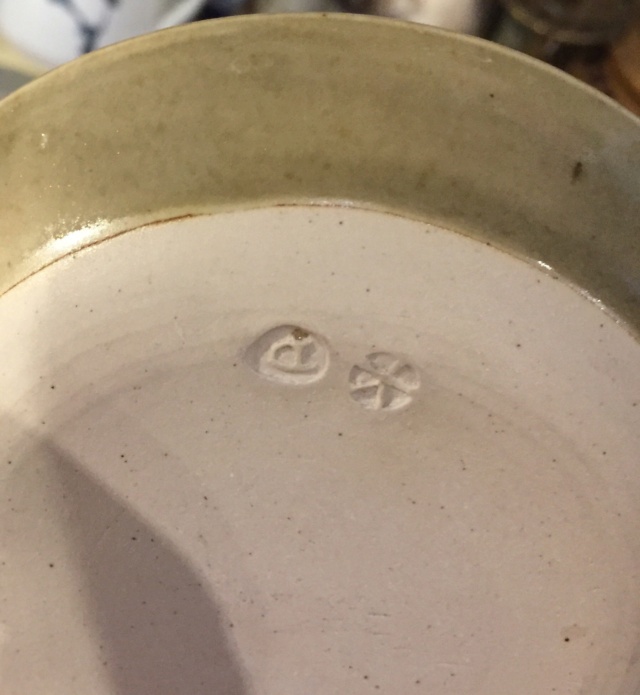