Bullers Limited boasts a significant history going right back to 1842 when Capt. J. Buller and J Devett bought the Folly Pottery in Bovey Tracey, Devon and started up in business as the Bovey Tracey Pottery Company. Subsequently, the company moved north to the Potteries and finally ended up in Milton, which at the time was situated in the country just outside of the "Five Towns".

From the begining the core business was the production of accessories such as bed knobs and door furniture and they were one of the first companies to explore new markets created by the development of electrical power. In fact by 1868 they were supplying porcelain insulators complete with ironwork in large quantities and it was this that was the mainstay of their business from then on.

In truth there would be no reason for me writing about such a company here if it hadn't been for Gordon Forsyth, who was one of Britain's most important ceramic designers of the 20th century. From 1919 until 1944 he was Principal of Burslem School of Art and he began obtaining hard paste porcelain from Bullers, which had always been a rare commodity in this country, for the students to use. Following on from this he was able to persuade Bullers to start their own studio in 1934 to enable his students to gain practical industrial experience.

Initially this was under the nominal control of Anne Potts, a 16 year old modeller, who was a protege of Forsyth. There she and other students used the standard Bullers porcelain, were aided by the companies technicians and used their kilns that were at the cutting edge of technology. The main technical input from Bullers was provided by Guy Harris, the company chemist, who was instrumental in the studio's success throughout its lifespan.

This situation continued until 1939 when Anne Potts married and shortly afterwards left the company. This, together with the outbreak of war, effectively closed the studio down until Forsyth intervened again. Fortunately Agnete Hoy came to England from Denmark and began studying under Forsyth at Burslem. She already had experience of continental hard paste porcelain and, after a period of experimentation was appointed designer and in 1940 the Bullers studio reopened. This period saw significant expansion and many students passed through the studio, including the studio potters Michael Leach and Rosemary Wren. However the operation never made money and, although Bullers had been very generous over the years, they finally decided that it could no longer continue and the studio finally closed its doors on 11th April 1952. 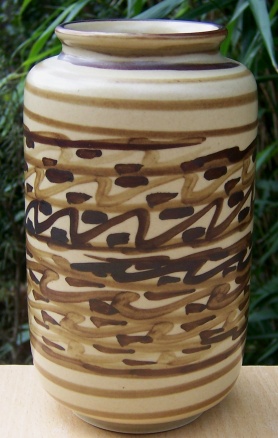 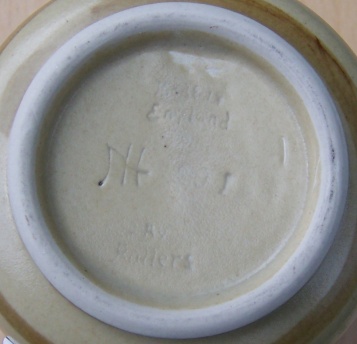 The problem with most of Buller's output is that it is glazed over the marks, which often makes them difficult to see.

Here at the top it says, "Made in England" and at the bottom " by Bullers".

In between there is a stylised A H mark for Agnete Hoy, which only means that she was the designer of this shape. In most cases the pots were thrown by someone else.

To the right of the stylised AH is a shape number that is difficult to make out.

This layout of information within the foot ring is typical of their output.
_________________
Now you should know by now that Potty and I need to see your bottom - we're funny that way!

I don't have an image of the marks used up to 1939 but the thrown wares were marked with a black stamp (rather than incised) and read,

BULLERS
MADE IN
ENGLAND

with a shape number below also stamped.

Occasionally Potts signed her work and this was incised,

Anne B. Potts
Made in England
by Bullers

Throughout the studio's existence individual designers and decorators were allowed to sign their pieces and the following initials have been identified: - 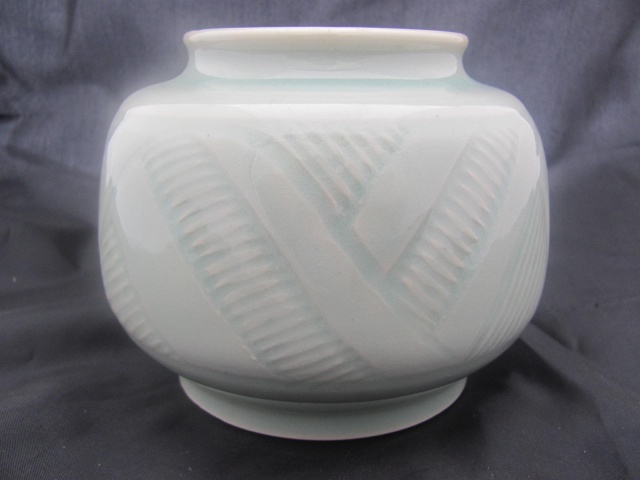 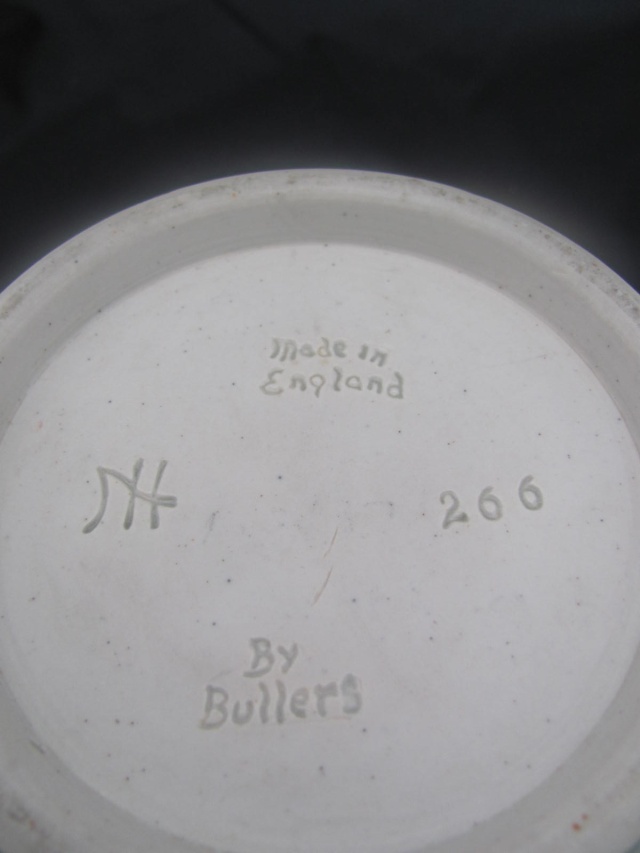 Strange, never seen a piece of Bullers I wanted to own, all a bit samey, brown wash
brushwork. However in the potteries museum there are some stunning examples of
proper art pottery they made.