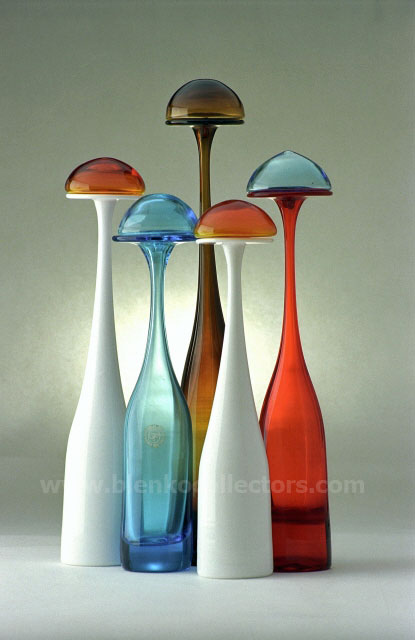 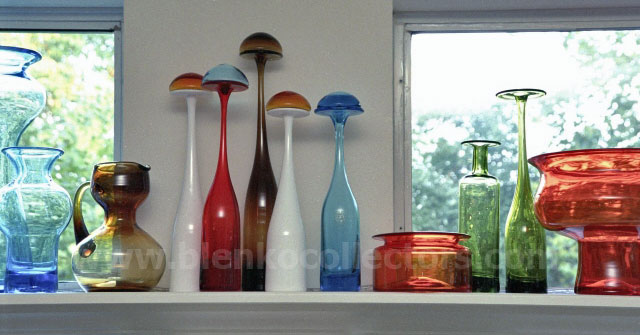 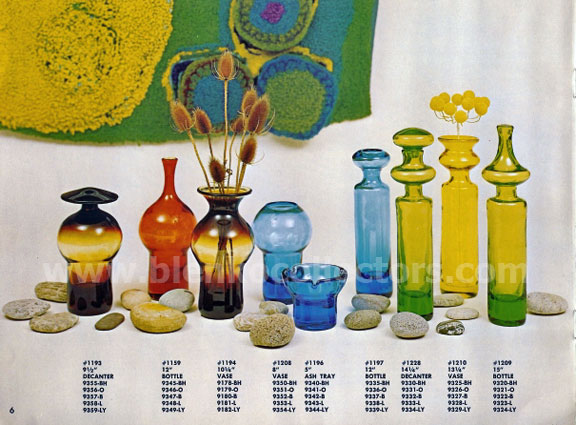 Greenwhich Flint Craft (GFC) was a line of glass, produced under it's own name but was under the umbrella of a larger glassworks called "Indiana Glass." GFC was a type of modern design/ art glass line, because Indiana Glass was known for more work aday practical glass and they wanted to expand into the art glass/decor market. At first GFC simply purchased molds and designs from the small WV Bischoff Glass Company to produce this line. Then they hired a man named Tom Connally as their new head designer.

(The following info. is excerpted from an article Tom's widow wrote for a newspaper, the full article is here: http://herald-dispatchblogs04.blogspot.com/2009/12/from-larry-thompson.html )

Thomas M. Connally answered a job advertisement in the Muncie Press for an assistant glass designer position at IG in 1961. His only credentials were a Bachelor of Science degree from Ball State Teachers College (Ball State University), a burning desire to do art (he'd been a high school and middle school art teacher at Tipton, and a need for more money than his salary netted from the split assignments of set designer at the Shoe String Theater and Exhibits and Display at Ball State. When Arthur Harshman offered him the position, he accepted. He'd never designed a piece of glass but was confident that he could do so. His innate aesthetic sensitivity, boldless creativity, and appreciation of elegant design were his best tools for the job.

Tom loved good contemporary art whether in glass, furniture, painting (his favorite style was abstract expressionism), architecture, clothing, etc. He was very proud of GFC and its strong commitment to aesthetics. He was an admirer of Scandinavian Design. His GFC line was only in production for 3 years, beginning in 1969 and ending in 1972. It's our loss that he never had the opportunity to design another line of art glass.

In all Connally did 70 designs in 5 colors, for 350 pieces total. 27 of the designs required stoppers. There are some other glass pieces out there (from the Bischoff molds) that carry a GFC sticker, but only Connally's design have sticker of clear plastic with white ink reading 'Greenwich Flint Craft." Also his style was so unique and innovative I think it is very easy to recognize from the Bischoff and other pieces that used the GFC imprint before him.

Here are a few of the GFC Connally pieces I have in my collection, in this photo there are 3 GFC bottles all with the mushroom style design. The rest of the pieces int he photo are Blenko and Seguso.

If I get a chance later I will get a few photos encompassing more of the GFC pieces I have - without other pieces mixed in.

Here is a full catalog reference on Greenwich Flint Craft, it shows the entire line of Tom Connally's designs that were produced.

Yes, that's certainly what drew me to GFC. The tall slender ones are my favorites by far, second to the mushroom cap decanters with the thin neck (#1163) then wide bulb bottom (#1183).

The tall slender mushroom decanters (#1163) are rare, I think because production wasn't huge to begin with but they are so delicate I'm sure many have been broken over the years and others are missing their stopper. I have two examples of the #1163 decanter. One I was able to piece together, I bought another decanter that had a mismatched stopper from the #1163 on it, then a few months later an example of the #1163 vase in the same color without a stopper showed up on ebay and I got it cheap. So I was able to put together my second complete #1163 decanter that way.

Funny, because the complete decanters, IF they show up on ebay, go for upwards of $350 or $400. I don't know if they've always been that high, and get sick about thinking how they were probably snapped up years ago for $20 and $30. I think I've see ONE example of the 1163 show up on ebay in the past year. Most of the examples out there are being hoarded by collectors like myself, because I haven't seen one in a store or other online venue in years now. It's so rare to even see them in any stores online or off in the USA anymore. Years ago you would find them on occasion, but not anymore.

Still the other interesting pieces from the line pop up occasionally on ebay, and if complete fetch high prices. I tend to try and look at the "unknown maker" glass listed on ebay to try and find someone who has listed a piece but doesn't know what it is. Doesn't happen very often, but maybe I'll get lucky.

I just badly want one more #1163 to have a trio. The photos at the very top, that show the 1163 with stoppers in different colors than the bodies - is actually from Tom Connelly's personal estate. I have NEVER seen a white milk glass GFC piece, nor did they publicly sell the decanters with mixed body/stopper color combinations. It would be hard to do them on your own, even with multiple pieces, because most the stoppers have been custom done for each body and aren't always interchangeable even among the same design. But man I love the look when they are arranged that way!