I lived in Mousehole for about 3 years in the mid-1960's and was delighted to count Bill Fisher as a friend.
He was well-known for his irascible personality but, underneath all the bluster, there was a kind and generous man.
At the time I lived in Mousehole with my wife and kids, we - and Bill - were pretty poor and I recall one day going round to his studio and sharing his lunch - a slice of bread, one onion and a bowl of vinegar. If that ain't friendship, tell me what is!!
One day, he made a sale and immediately invited me to join him for a meal in Penzance, It was quite late in the evening but he phoned The Tarot Restaurant, then run by a Canadian former jazz musician called Dennis Ray who told Bill he'd just closed. Undeterred, Bill told him to b-well open up again and off we went to enjoy a fine steak with salad and a bottle of wine together with Dennis. Ah! happy days!
For my 60th birthday my wife (not the one who lived with me in Mousehole - she sadly died age 45) bought me a Bill Fisher bowl. Typical of his work it is furiously worked in way that proved his inner conflicts and nervous energy. It is my most treasured possession and holds a mountain of fruit!
Bill himself gave me a self-portrait, dating, I guess, from around 1960/62. It is a picture of a disturbed man but the disturbance concealed a massive talent. His terracotta bulls and unicorns are the stuff of legend.
Geoff F

Yes PLEASE may we some some pic's.
A few big Bill fans on here, so any stories or info would be very much appreciated.

Hello again
good to see Bill so well-remebered.
I also see Eric Leaper in your Forum. I knew him and the family as well.
Many a Friday or Saturday night we'd grab a bottle of wine from the Ship Inn in Mousehole and all troop over to Eric's for a 'party' (posh name for a drink, music and dance).
I know one Saturday morning we left Eric's, I took my family home, had breakfast then drove up to Redruth to open my office (couldn't do that these days!).
Before I even thought about going to live in Greece, Bill Fisher was the only man I had ever danced with!
The two pix (hopefully they've appeared) are the 'birthday bowl' and the self-portrait. As you can see, I am no David Bailey but I hope you get some idea.
cheers
Geoff

Interesting bowl Geoff. Is it decorated on the outside ?
I guess like much of Bills work it is unsigned.
Do you have any more of his work you could show us ?

Also, please feel free to add any other info on Bill and his work, that you may remember from time to time.
Bill is sadly so poorly documented - almost nothing is known of him. Which is a great shame, because he was such a great talent.
We really need people that knew him to share their knowledge, before it is lost forever.

I've been wondering if Bills later work - which we are only now becoming aware of, should be kept seperate from the Celtic pottery thread, as it doesn't really have any connection. So I guess this thread would be a good platform for this work.

Anyway, for those interested in Bill (or other Cornish sculptors), I've just become aware of an interesting little booklet.
Forms And Faces - Sculptors in SW Cornwall, by Marion Whybrow, 1986, St Ives Printing and Publishing Company.

It covers 23 artists, Bill Fisher included. Each has 2 pages, which gives a short bit of interview, a picture of the artist and a couple of images of their work. It also tells you where each of them studied and contact details (at the time). For Bill this is 2 sculptures, of a totally different style to that most of you will have seen by him - Nothing like his animals or singers, and an actual photo of the man himself.

I've just managed to get myself a copy, which makes a great little addition to my collection.

Quite rare and not cheap (unless you get lucky), but probably worth having for some people.

Thanks to all for your comments.
I have seen many unicorns - most of them after one of Eric Leaper's parties!! Seriously though, yes, I have!
The bowl shown is decorated on the outside and IS signed by the man himself.
I agree with other comments about Bill and Celtic Pottery - most of the latter work was done by Maggie Fisher after she and Bill split up.
Geoff F

We have quite a collection of Bill Fisher's amazing work......a super unicorn head, various size bulls and horses and a version of a Roman head facing two ways. We have very fond memories of discussing Bill's work with Nigel Hallard when, in the late 60s and 70s, instead of ending our holiday with a slap up meal, we would buy one of Bill Fisher's pieces.

Hi Dorsetlass
sounds like you have a pretty good collection of Bill fisher's work!
What a sound investment - a Bill piece instead of a meal - I like that!
My wife and I were in Mousehole the other day but Nigel Hallard was closed - shame! it would have been good to catch up with him.
Would you be prepared to post any pictures of unicorn head and bulls by Bill? Would you consider selling a bull?
One of my life's regrets is that I never acquired a Bill Bull as a family heirloom!!
Look forward to your reply.
cheers
Geoff F

Many people aren't aware of Bills art work, so as I thought I'd show two I've just acquired. These are ink drawings, one is signed the other isn't (which some don't seem to have been).

They are less 'disturbed' than many of Bill's drawings, although one is heading in that direction and is more impressionist than the other.

As I collect Bills pottery, I thought the collection wouldn't really be representative without some of his art work. I couldn't live with most of what I've seen as they are just too 'disturbing' for me, but these two I can live with. I don't think I'll buy any more, unless I see ones I really do like (of which I have seen a couple).

Here are pic's of them both in and out of the card mounts they came with. I'll be enlarging the mounts to show more of the actual drawings and the signature. Obviously they don't actually have the word COPY on them

I'll add these in the art section as well (if the Mods don't mind).

I have several William Fisher artworks. They are stated as being from The Barkery Studio, The Cliff, Mousehole. Would this be the same gentleman?

Welcome to the forum thamesweb.

I don't know where his art work was sold from, but I can't imagine there has been another William Fisher artist working from Mousehole.
How long have you had them and where did you buy them from (direct or ?)

I'd love to see those you have and could probably confirm if they do look to be by Bill. Do yours have a price written on the back (or backing card)?
If you'd be so kind, please do add them either here or in the topic I've started for his art work here https://www.20thcenturyforum.com/t9945-bill-fisher

Thanks for the welcome. The pieces were bought by my late brother. I will photograph them and add to the other forum as soon as I have a moment. Best regards. TW

I Look forward to see the artwork , it would appear that Bill was left handed , just a little thing of mine when I look at drawings and paintings

big ed wrote: , it would appear that Bill was left handed , just a little thing of mine when I look at drawings and paintings

Ed - how on earth can you tell that

It's just the way the portraits are facing ,right handed people would tend to have them facing the other way , not always but about 90% of the time , probably no way of knowing for sure unless you knew him well and I know it's irrelevant as I say it's just something I think of when I look at portraits

Dear Dorsetlass
I really would like to hear whether you would be prepared to part with a terracotta Bill Fisher bull as it is my daughter's 50th birthday next year and she has LOVED those things ever since we lived in Mousehole (she was at the primary school there - as a pupil, not a teacher!!).
I do understand that once one has acquired something like that it is very hard to even think of letting it go but do, please, put me out of my misery.
Best wishes
Geoff F

Hi thamesweb and welcome to the Bill Fisher fan club!!
I think, from memory, that Bill first worked from a small studio at Wharf Cottage in Mousehole but it could well be that he ended up selling via what I think should read as the Bakery Studio, though your Barkery may well be right. It is so long since I was living in Mousehole though my wife and I frequently visit, just for the atmosphere of a very special place. As with the others contributing here, sure - I'd also love to see pictures of the artwork you have.
As for 'big ed' and his left-handed theory, I can't remeber. I think he was probably either amphibious or ambiguous - at home on land or in the sea, either way!??!! Joke?
cheers
Geoff F

I have a collection of Bills work , My wife June and I bought it in August 1959 !!at the Wharf Pottery Mouse hole harbour, a signed fish dish , a terracot bull and cow and a pair of beakers ' one still has a label "made and designed by william fisher, Maggie also made June a pair of expandable flap sailcloth trousers , she was 6 months pregnant , and enjoyed playing with Maggie's baby, I think the studio had not been open long
Brian Rudd now aged 80 !!!! sadly now a widower 16 years

Mod Edit: Brian I've taken out your address and pnone number - not good to have it on the internet

Welcome to the forum Brian.

We'd love to see pics of your items, especially the Bull, his terracotta work is really outstanding.

these are the pieces that Brian mentioned

This was posted on Facebook as an ID request and I asked the owner's permission to copy it here.
The consensus is it's by Leaper as the style and eyes and stance is very like the Leaper bulls, but no one's seen another one. Any info? 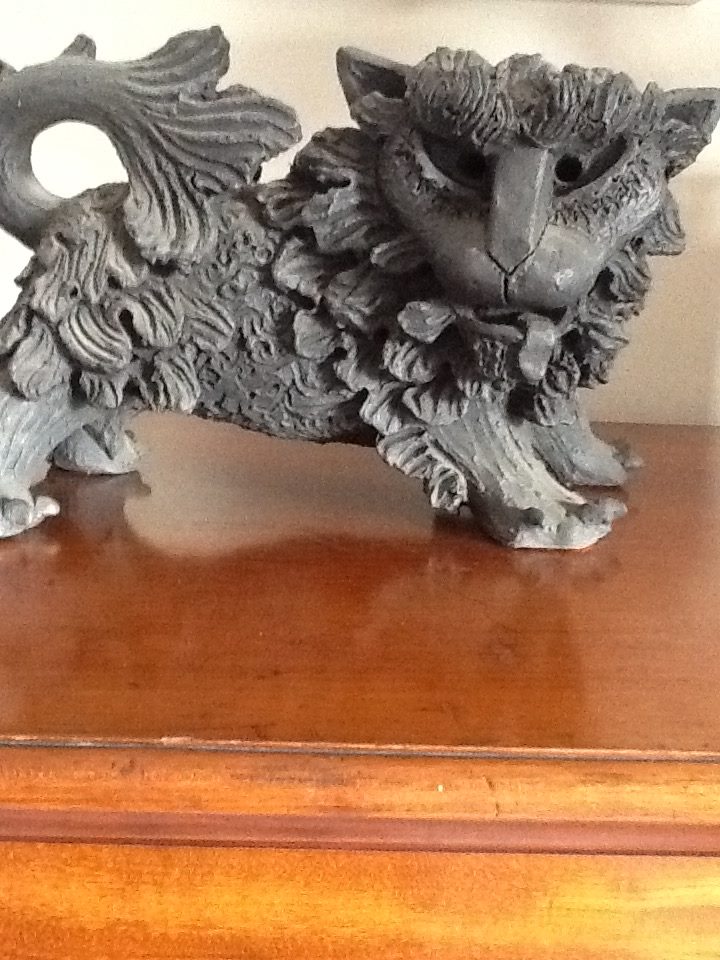