looks like the work of Philip Leach and impressed 'HARTLAND 2002' but no signs of a leach mark?
any input would be appreciated

I don't think that it's Philip's work but a stoneware teapot from the other pottery in Hartland run by Clive Pearson.
_________________
Now you should know by now that Potty and I need to see your bottom - we're funny that way!

Potty wrote:It does look a lot like a small Clive Pearson bowl I bought the oher day (glaze / style of decoration).

Is it  brown stoneware?

I understand that the pottery is closed now and that he has moved all of the business up the coast to Clovelly. I think that he operated both businesses for several years.
_________________
Now you should know by now that Potty and I need to see your bottom - we're funny that way!

he does a lovely lid and a superb spout, my pot pours beautifully
_________________
"Changing your mind when you know what’s happening and you don’t like it. That’s what democracy is all about"

This little pot is 9cm high with a clear mark. Does anyone have any idea who the potter was?? 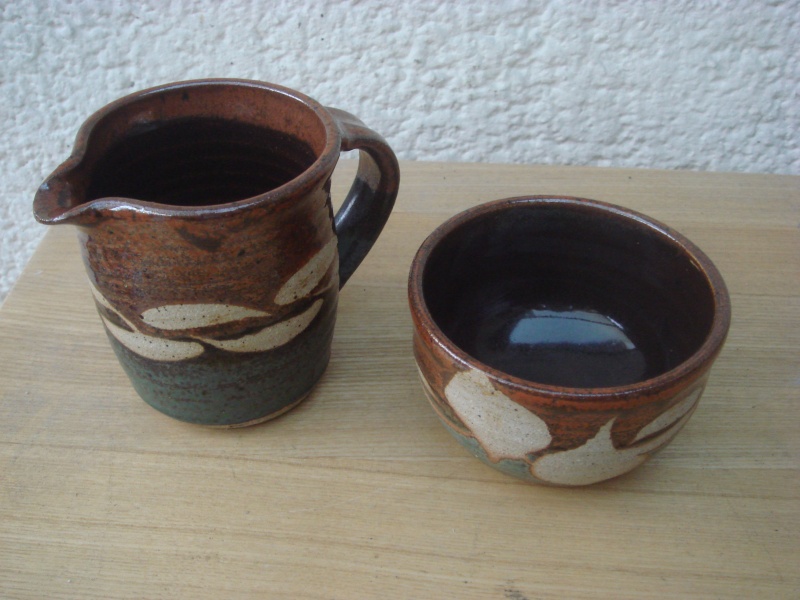 Clive C Pearson was born 1947. He established Hartland Pottery at his workshop in 1972 before moving to Hartland, Bideford, Devon in 1981. He made domestic and decorative reduced stoneware with Jun glazes. From 1992 Clive C Pearson also ran Clovelly Pottery, Clovelly, Devon (in 1997 he was still running both potteries)

dantheman wrote:looks like the work of Philip Leach and impressed 'HARTLAND 2002' but no signs of a leach mark?
any input would be appreciated

Sorry about reviving an old thread but I've just joined the forum and searched for Hartland Pottery as my wife ran it for Clive Pearson (mainly using Clive's glazes) for several years, thus I found this old post.  The tea pot is indeed a Hartland Pottery Chun substitute (Tin on Tenmoku) made by my wife so there should be a round SJL stamp somewhere on the bottom. Her stamp is on the pots at the bottom of this thread.  The majority of work in Hartland Pottery was hers from about 1995 as Clive only worked in his Clovelly Pottery by then.  She took a nine year break from potting in 2003 when we had babies.  After she finished a chap called Chris took over until it closed but I can't remember his surname I'm afraid although he is still potting in North Devon, as is my wife once more.

Welcome to the Forum, Shiney, and please don't feel bad about adding any information to this or any other threads that we have - they are meant to be added to.

I'm delighted that you have revived the thread Shiney, I had put the teapot in storage while I decorated my kitchen then forgot to bring it out again, time for tea I think
_________________
"Changing your mind when you know what’s happening and you don’t like it. That’s what democracy is all about"

your wife does a lovely tight lid and a cracking spout.
CHEERS!
_________________
"Changing your mind when you know what’s happening and you don’t like it. That’s what democracy is all about"

She's always been fussy about her spouts and lids.  If it doesn't pour without a dribble it goes in the seconds box.  I used to moan at her about her lids as I thought they needed one of those divots to stop them falling out but she always said I was wrong as indeed I was.  I should have shut up of course as she is the potter.

SJL stands for Sarah Jane Lander, she studied Art and Craft Design specialising in ceramics at Plymouth College of Art and Design from 1987 to 1989 (where we met).  We came to Hartland in 1991 and she started working for a potter friend of mine Tracy Coulam learning the basics of production throwing.  In late 1992 she started a sort of unofficial apprenticeship with Clive Pearson which is where she really learned her craft under his honest and blunt criticism but she admits if he'd been softer she wouldn't be as proficient.  They are great friends but they're still not sure about each others handles.
She ran Hartland Pottery until May 2003.

Last year in March she opened The No 39 Pottery also in Hartland producing stoneware and a bit of earthenware and it's going very well.

It's lovely the way people find their way to this forum and add their little bit of knowledge - especially those who actually made the pots. I do hope the forum servers are well-backed up - it would be a tragedy to lose all this information 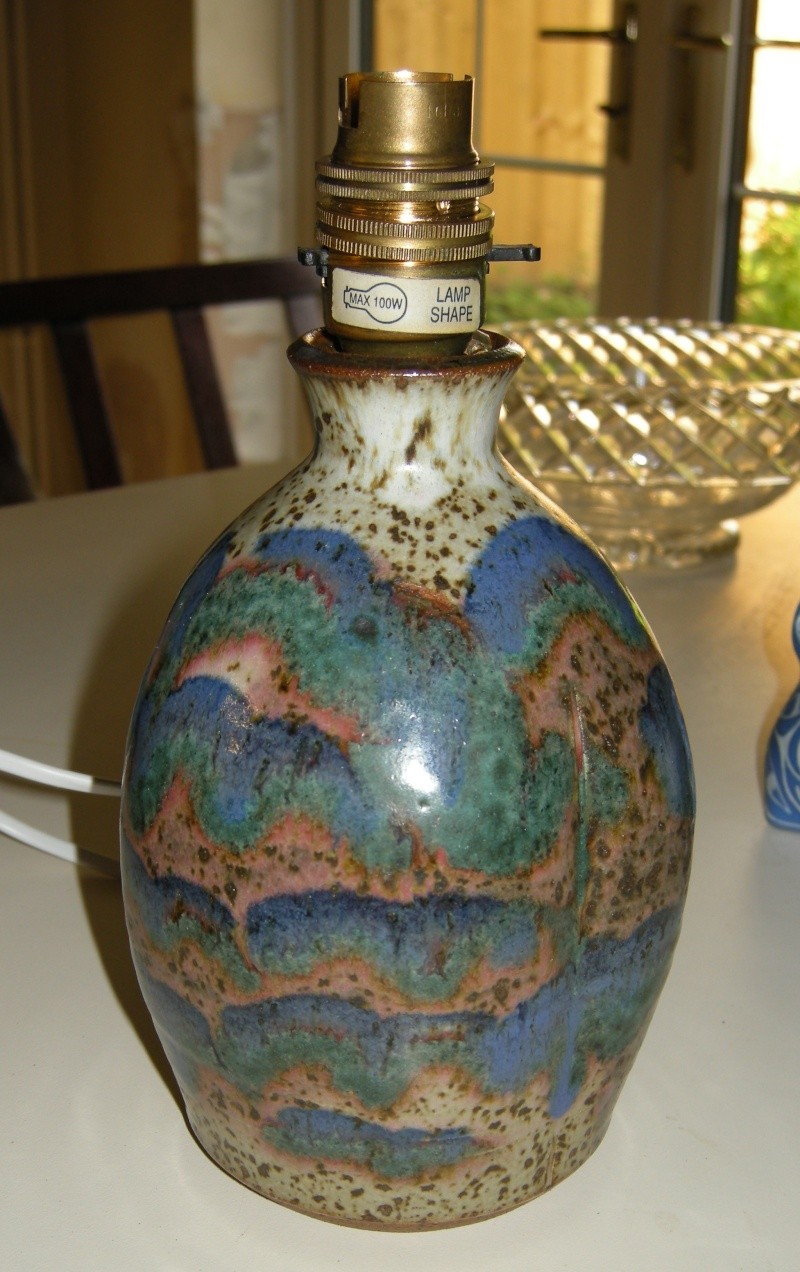 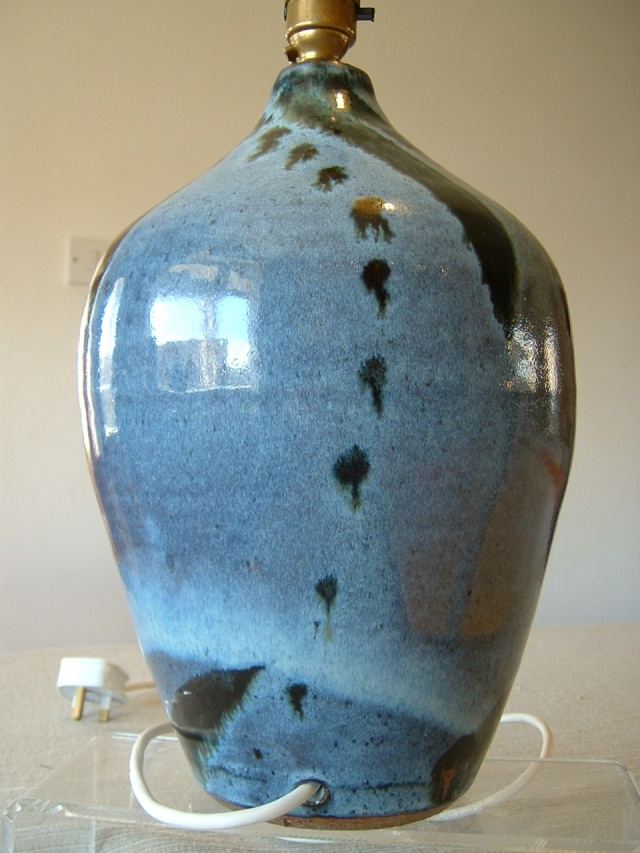 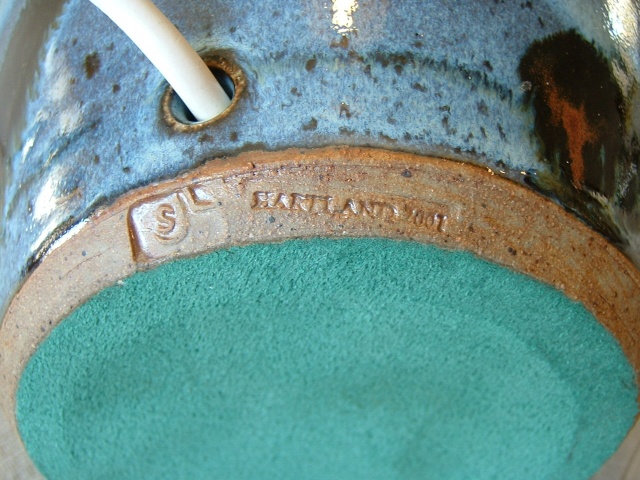 Hi
This little vase has the Hartland Pottery mark but I'm not sure about the potter's mark. Thought it may be Sarah Jane Lander but it doesn't appear to be the same as in the earlier post 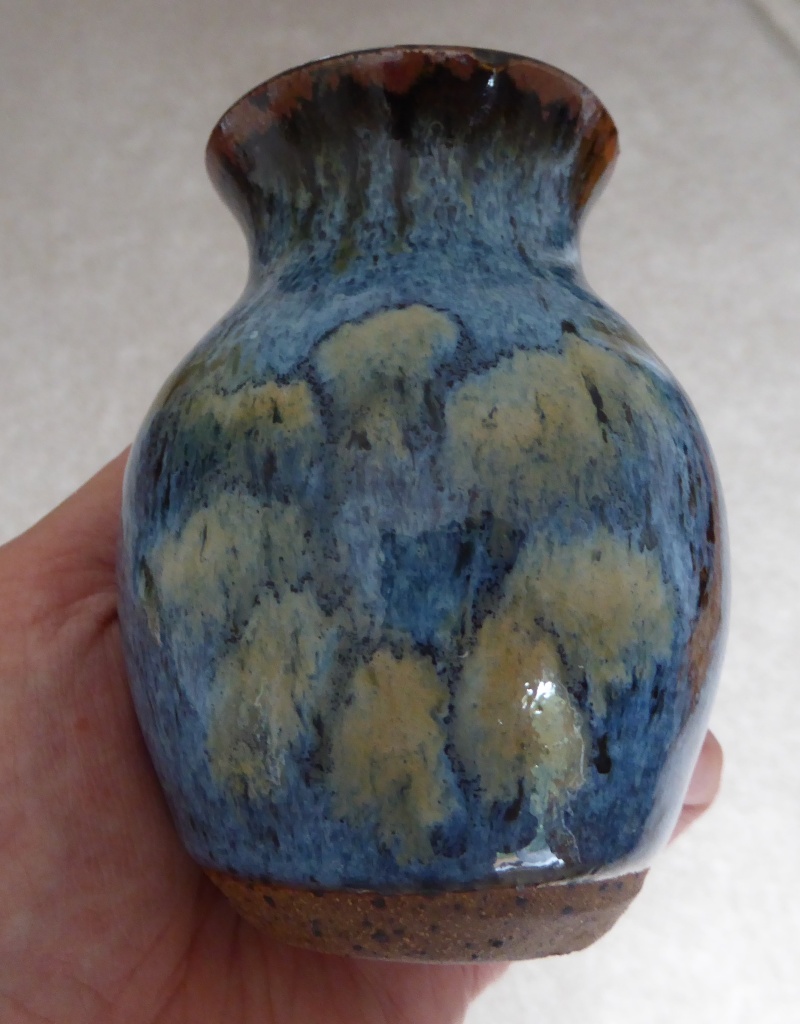 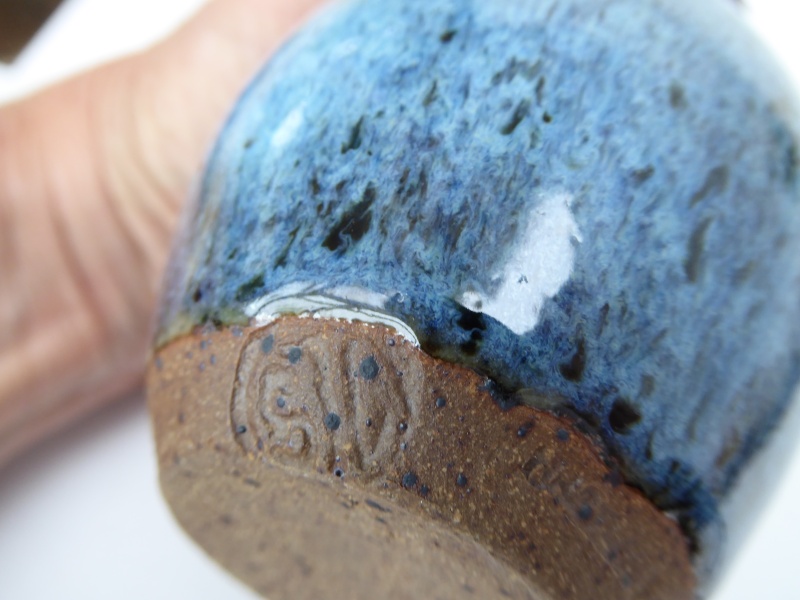 Stamp looks like CTD. Shiney mentioned a Chris person taking over from Sarah, so maybe this is his mark
_________________
Just my personal opinion, take it or leave it.

Aha, a distinct possibility. I hadn't read down as far as that post.

I notice the Hartland Pottery mark on the pots on the thread usually have a date included. This little vase also appears to have one ( two numbers only) but unfortunately they are impossible to read. Shame as that may have provided the complete answer 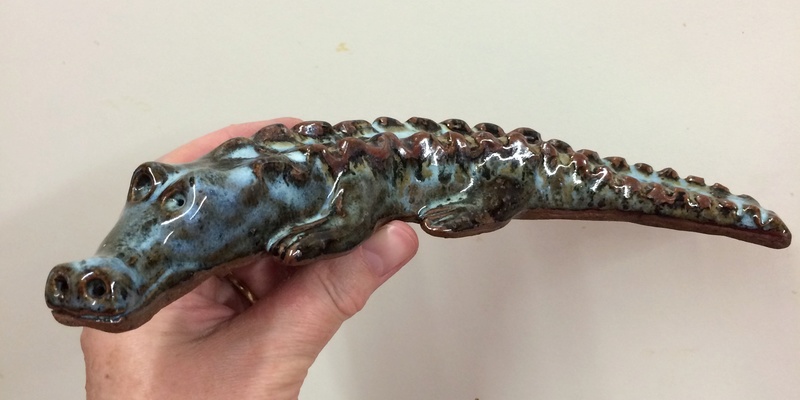 A lidded pot, with a perfect mark! 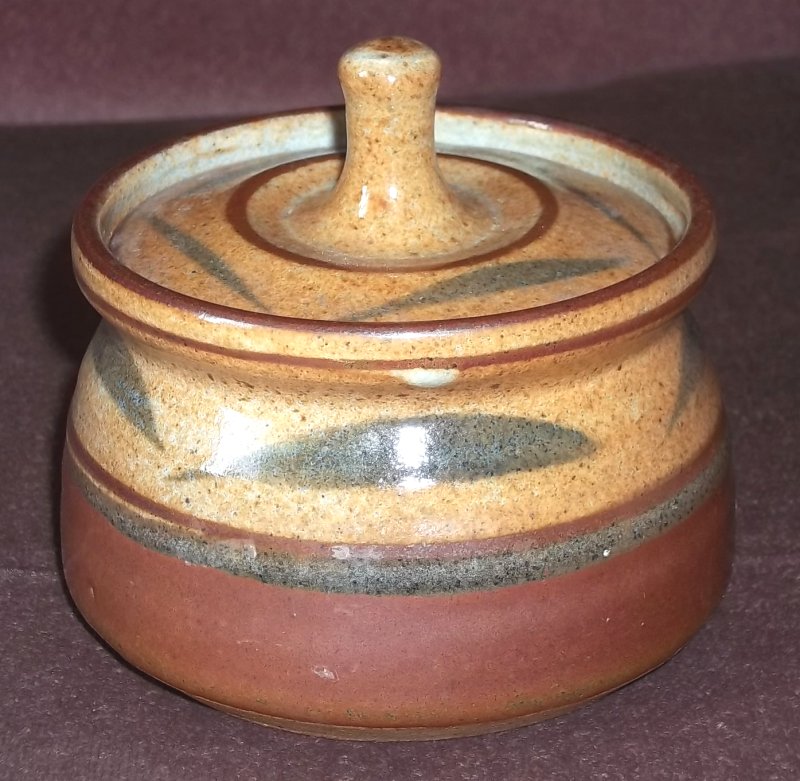 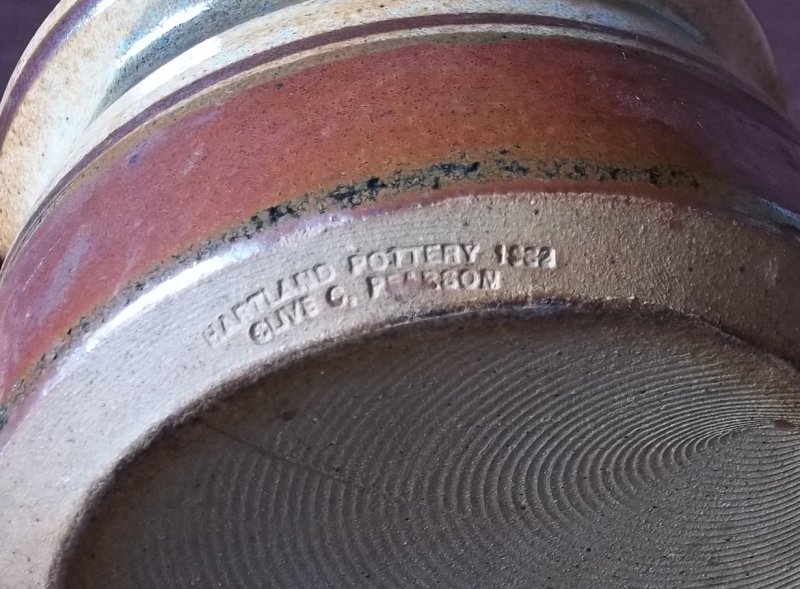 Nice to find a dated item. 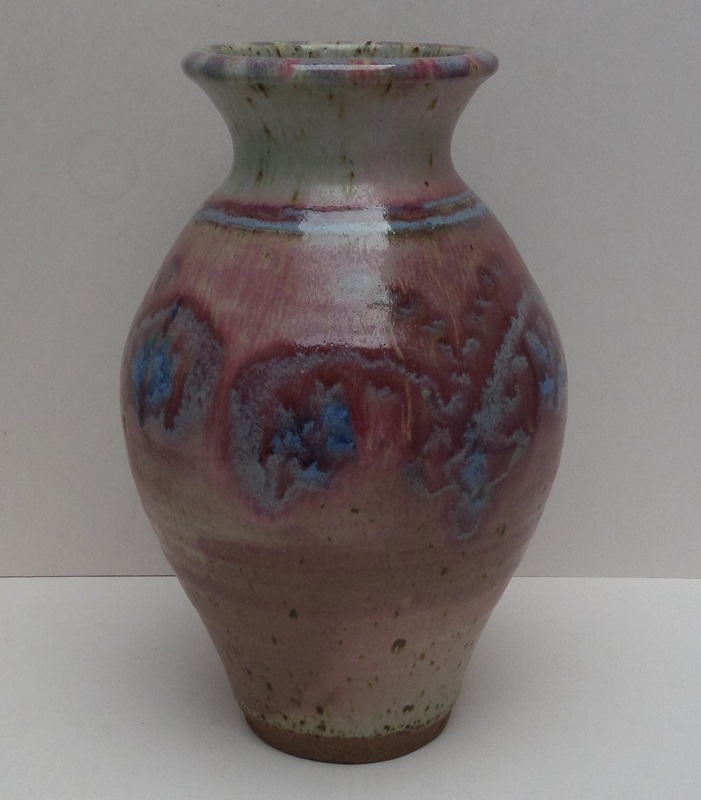 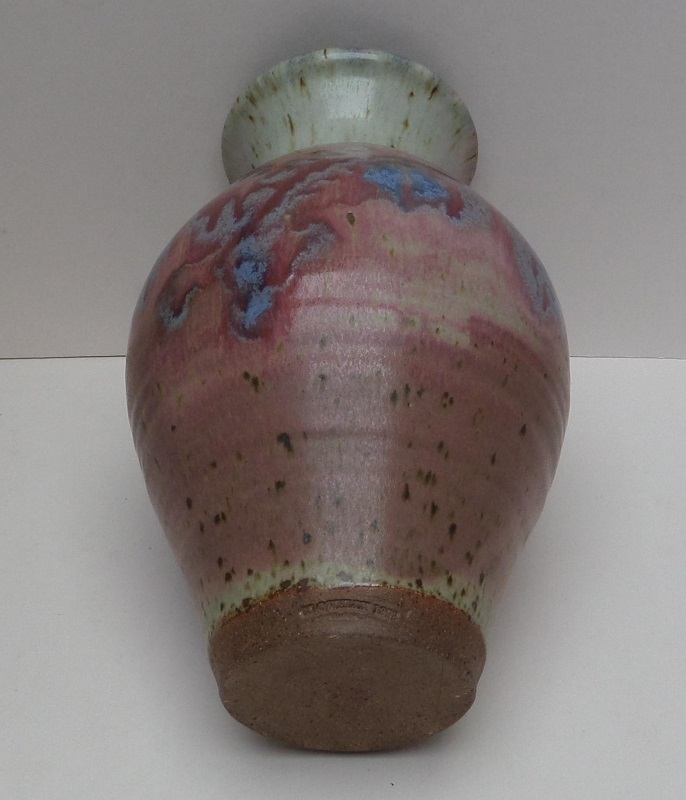 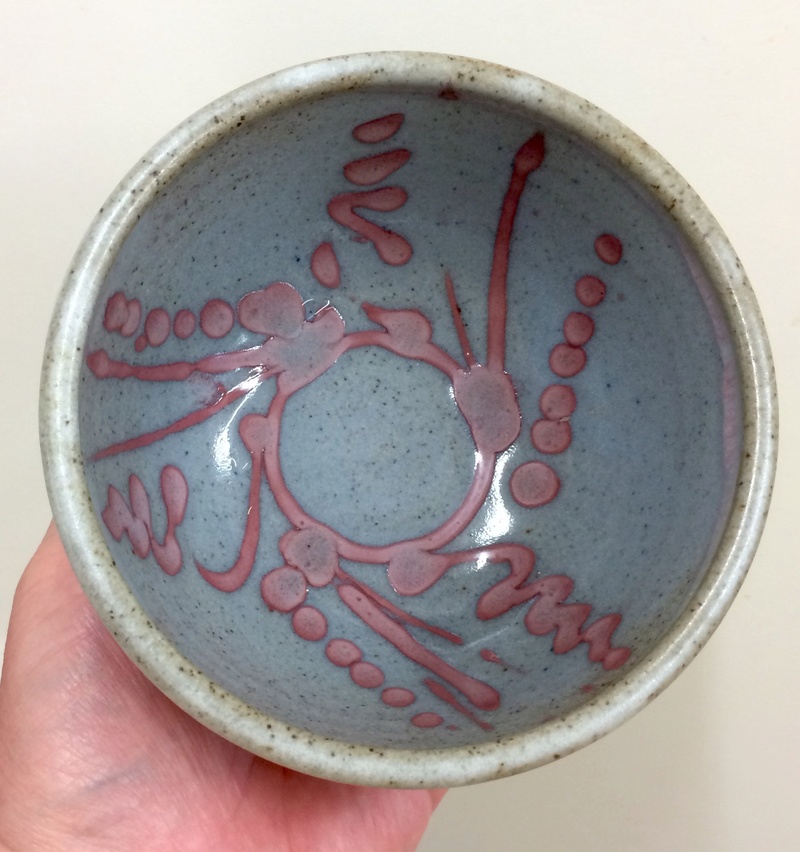