Kerry Glass was founded in 1978 in Killarney, County Kerry by Michael Harris and 2 friends Ross and Elizabeth Lewis. Harris provided the designs, equipment and expertise. The pieces were marked with the same 'flame' pontil mark as used at Isle if Wight Glass, later pieces have a reversed 'flame' logo which differentiates them from similar Isle of Wight production. Ross Lewis died in 1985 and the business was sold and finally closed in 1996.

A 'Peat' colurway vase and base mark

A 'Heather' colouway vase and base mark

Kerry Glass or Isle of Wight?

I listed this piece on ebay as Isle of Wight because of the flame pontil. I will hold my hands up and admit I was rushing, and I didn't take the time to find out any more about it. I did a bit of research last night and found the Kerry Glass Style section of the IOW website, and thought I'd found the answer so I revised the listing to add the information that it was Shamrock pattern, etc.

But this morning I found the thread for Rob's bowl and read Pip's information
https://www.20thcenturyforum.com/t5599-id-request-if-possible-for-blue-green-bowl

Now I'm not sure if it is Isle of Wight or Kerry Glass, so I've cancelled the listing while I see if any of you lovely people can help me figure it out. I wondered if the height would help as the one on the IOW website is 13.5cm and mine is 18.5cm. It weighs 455g.

Definitely Kerry (Shamrock cylinder vase), they also used the flame mark. Later they lost the stamp used to make the mark and had a new one made but it was backwards, hence the occasional reversed example that crops up.

Just to add a little confusion, a little of Kerry's glass was made on the Isle of Wight at the Studio, training was carried out there as well as some production.

Hopefully (if I get this right) I can add a photo of the usual flame mark and a reversed flame mark.

The mark on the left is on an IoW vase, exactly the same was also used by Kerry. On the right is a reversed flame mark found on a small Kerry globe vase.

Thank you for all the replies. So definitely or probably Kerry - but how can we tell it's not one of the shamrock pieces made at IOW in August 1979? Especially as there is a shamrock cylinder vase with an IOW label here :

I'm just trying to understand how to tell the difference in the period they both used the same mark. Are we talking balance of probabilities?

Not probably but definitely Kerry, what difference does it make where it was made anyway?

This colour scheme was used for Kerry production only. 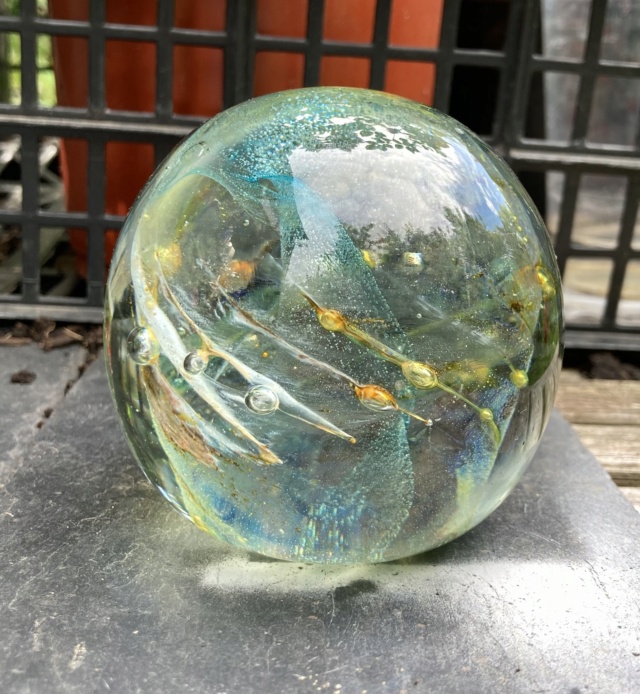 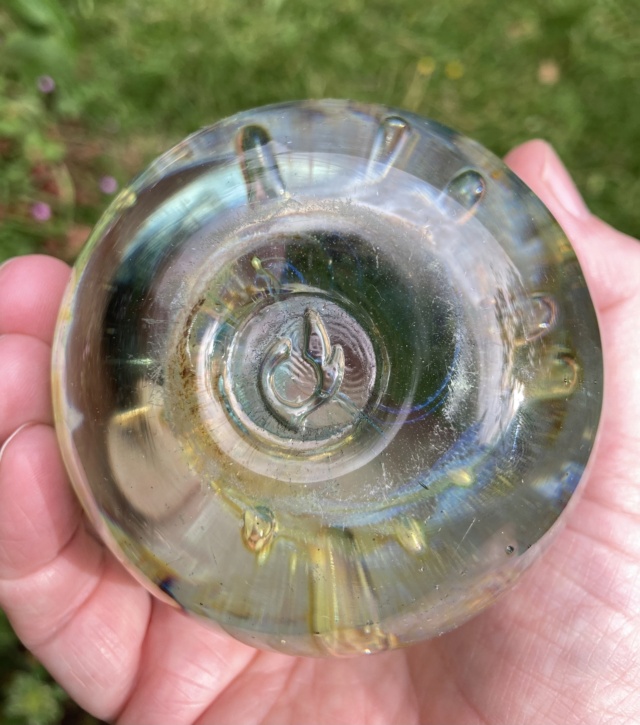