No 20th Century Forum can be complete without a mention of the studio potter, Ursula Mommens, who was born in 1908 and lived until she was 101. If nothing else that makes her the British studio potter ,who lived longer than any other during the century, but Ursula was much more than that.

She was the great granddaughter of Charles Darwin and the great great granddaughter of Josiah Wedgwood, who began potting in 1922 and had her last solo exhibition at Contemporary Ceramics when she was 98 years old. She trained at the Royal College of Art under William Staite Murray in the late 1920s, after a recommendation from Charles Vyse, and ran Michael Cardew's pottery at Wenford Bridge for a time during the Second World War.

A retrospective exhibition of her work together with that of her second husband the sculptor, Norman Mommens, is currently being held at the pottery she start in 1951 in South Heighton near Newhaven in Sussex. This exhibition began last weekend and is open every Saturday and Sunday for the rest of May, as well as Spring Bank Holiday Monday, 30th May from 11am to 6pm each day.

The picture of Ursula below was taken during 2002 and I will add some images of her pots in due course.

As promised a few images of work.

The first is a pair of moulded Festival of Britain flatback figures made by Ursula and Norman when they first moved to the pottery at South Heighton.

A small stoneware jug by Ursula when in her nineties.

A porcelain posy bowl again when in her nineties - so it is really 21st century!

Ursula Mommens (nee Darwin - hence the UD mark) is one of my favourites too! The work is so well-made and she sells well too

These are ones I won't part with: 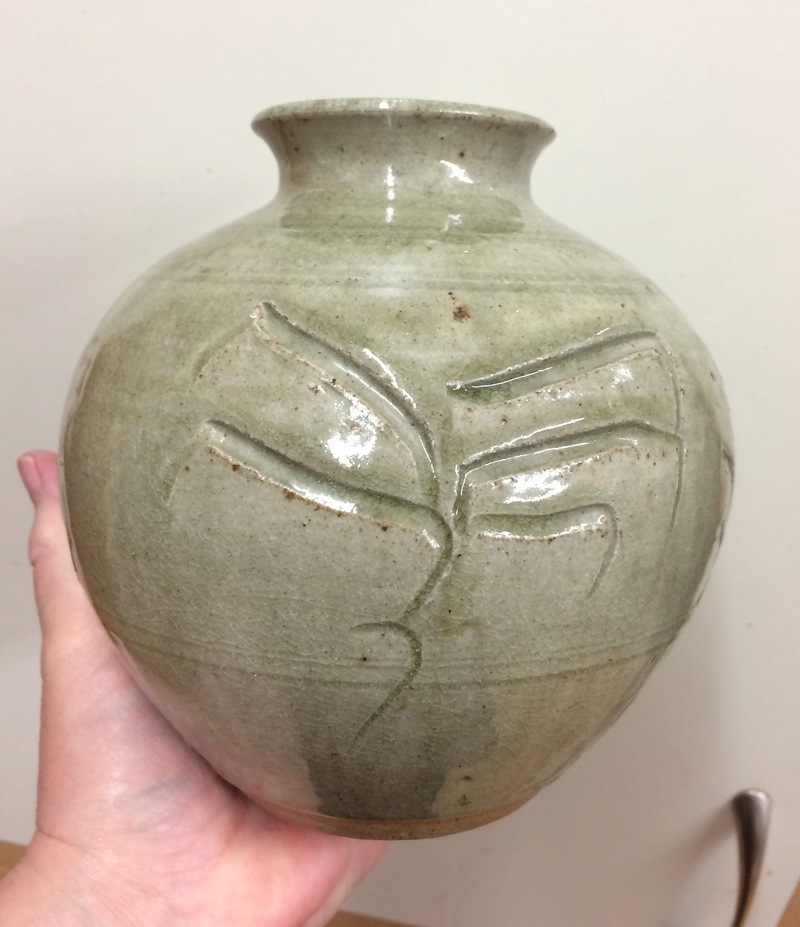 I'm pretty sure i bought these two together ages ago. The glazes and brushwork are identical, even the iron oxidation spots.
Although the vase mark is a bit mashed up, and glazed over, I'd be confident lumping the two together.

My initial thought was of course Ursula Mommens, but it doen't look quite right. Any thoughts? 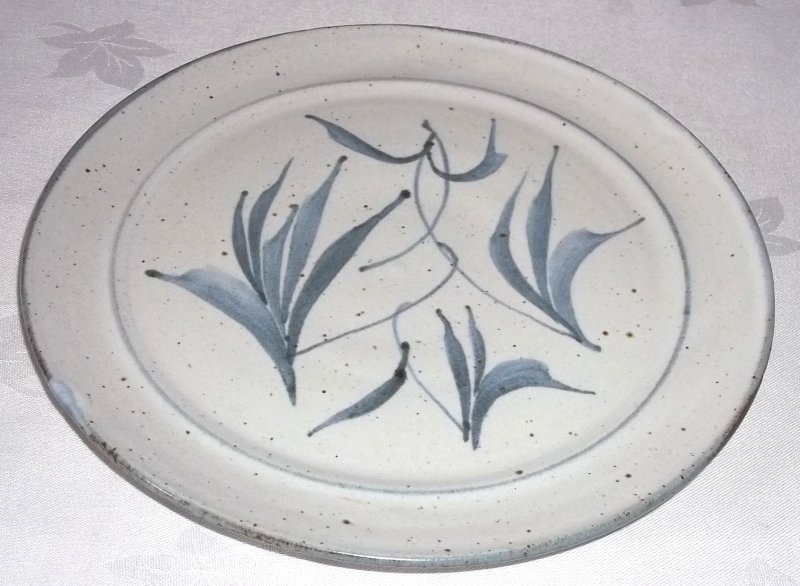 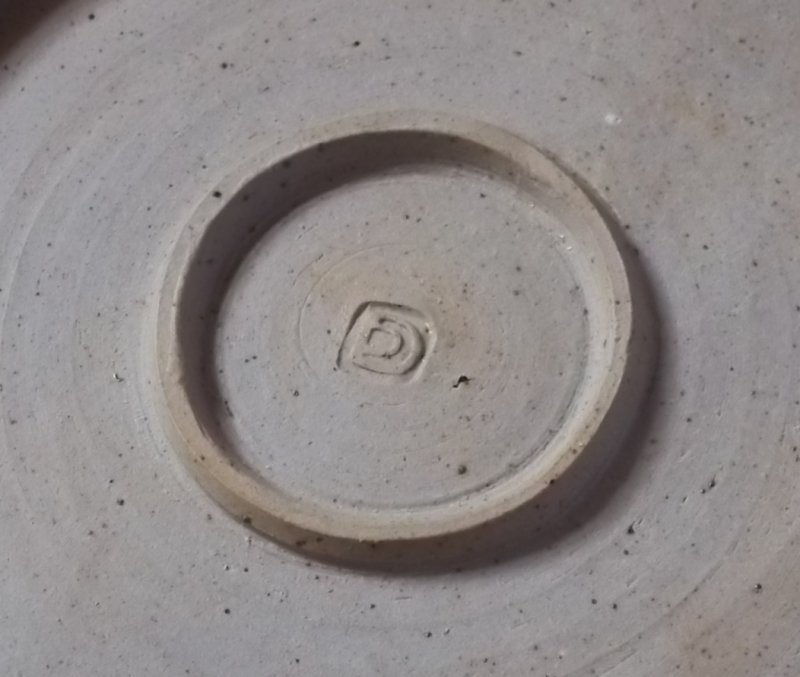 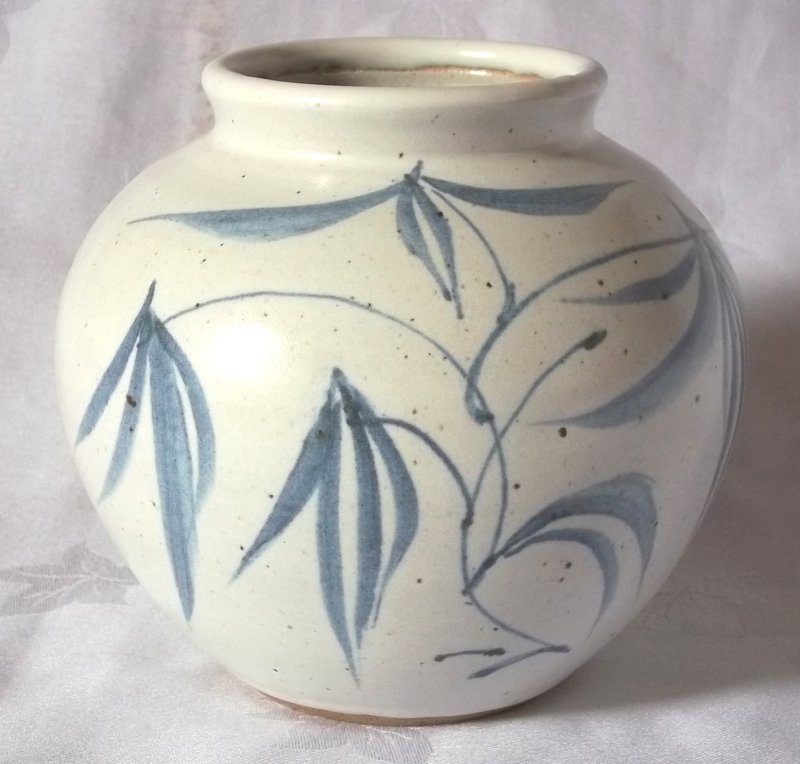 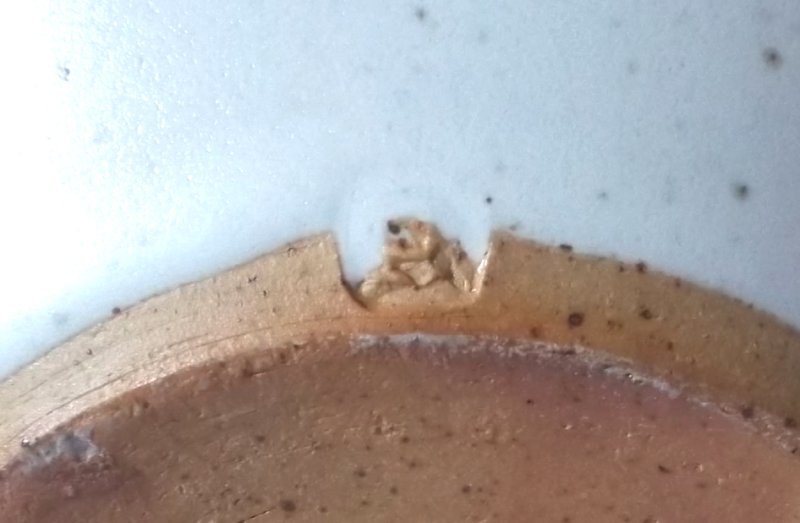 The plate is definitely Ursula ]Mommens. Have some with exactly the same mark.The blue decoration is exactly hers as well. But the glaze inclusion on the vase, not too sure.

Thanks PP. It doesn't quite match the marks in the books which always have
seriphs on the DD.

The glazes are identical but the camera has made the vase a bit yellow! 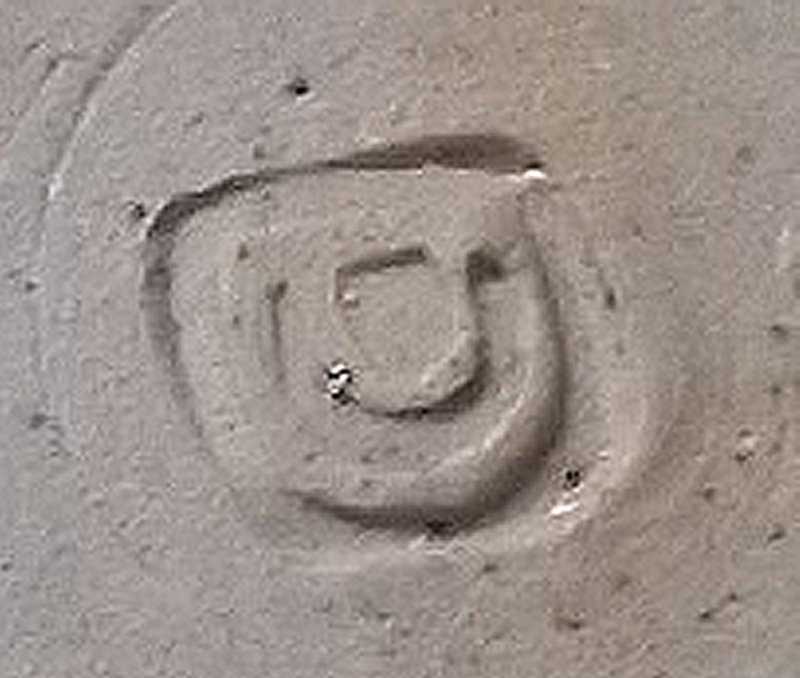 I've had this for years, but only realised who made it today. Stoneware storage jar, brushwork decoration, height including the lid about 12cm. 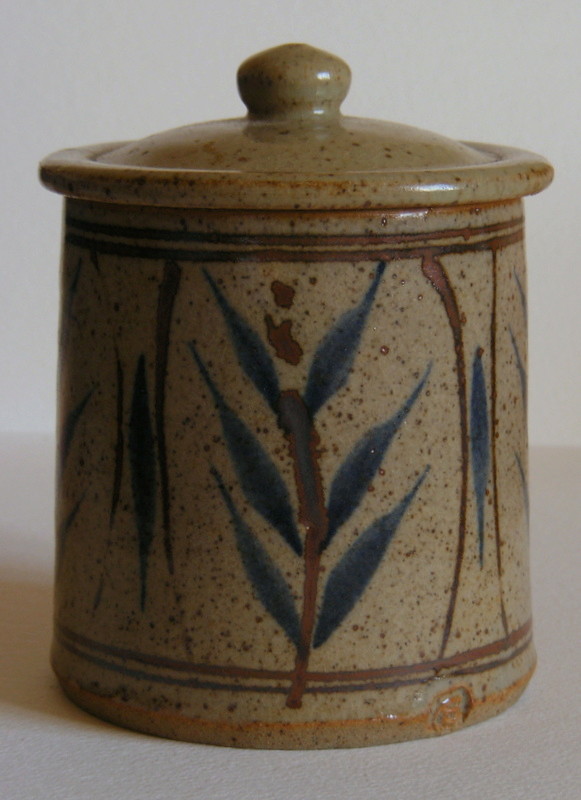 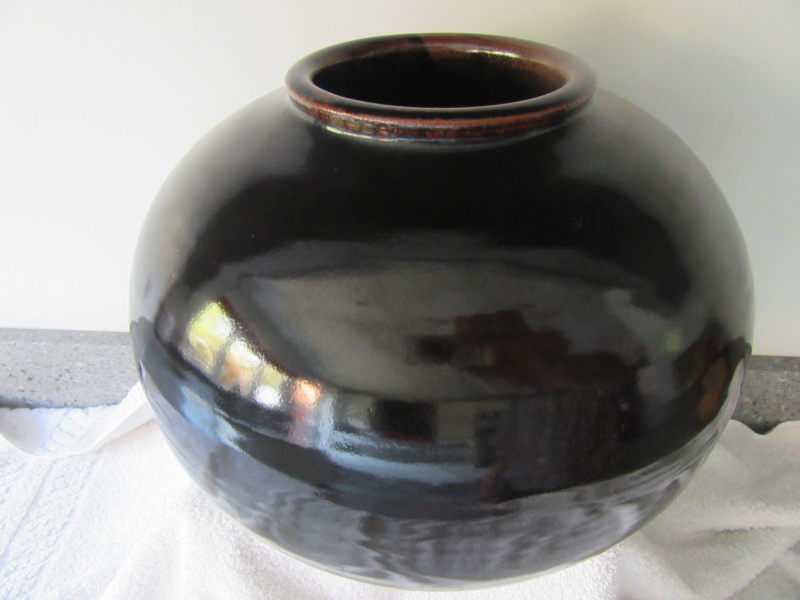 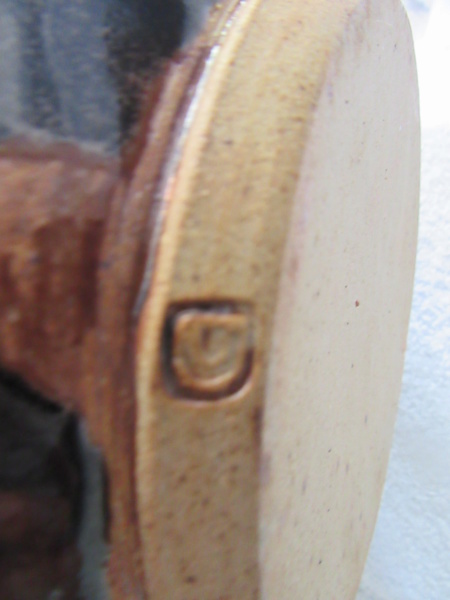 A substantial Moon Jar which I was did not want to part with. But in downsizing, that is the bit of heartbreak one has to live with

I hadn't thought about it before but Ursula was a little ahead of her time, as Moon Jars feature in the repertoire of potters today when they never really did in her day.
_________________
Now you should know by now that Potty and I need to see your bottom - we're funny that way! 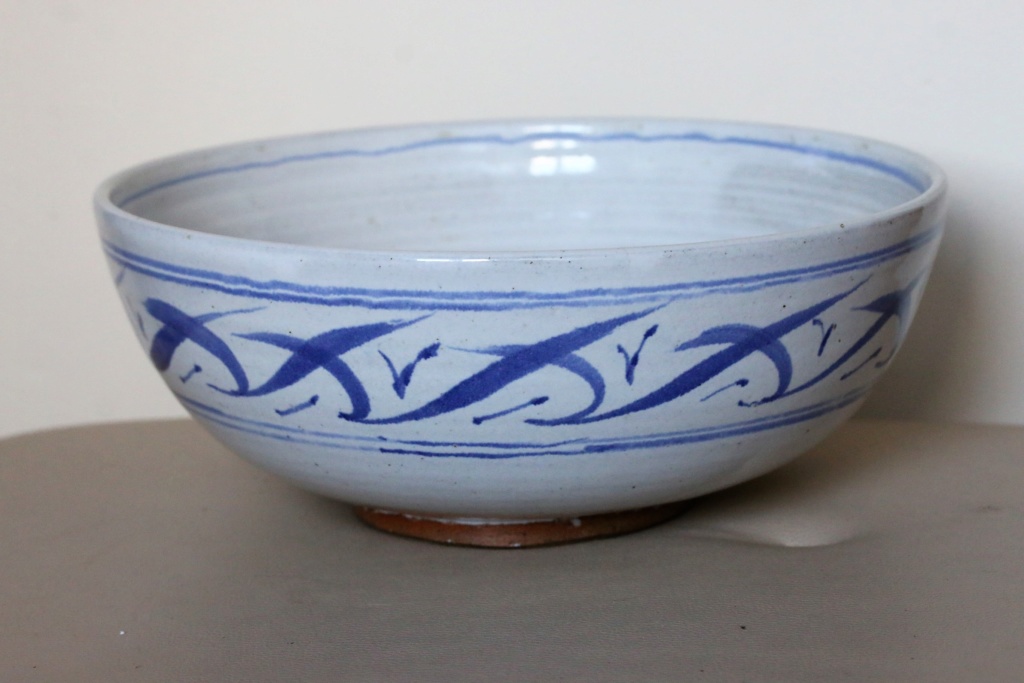 Hi - This is an example of her work. Bought by accident by my wife! 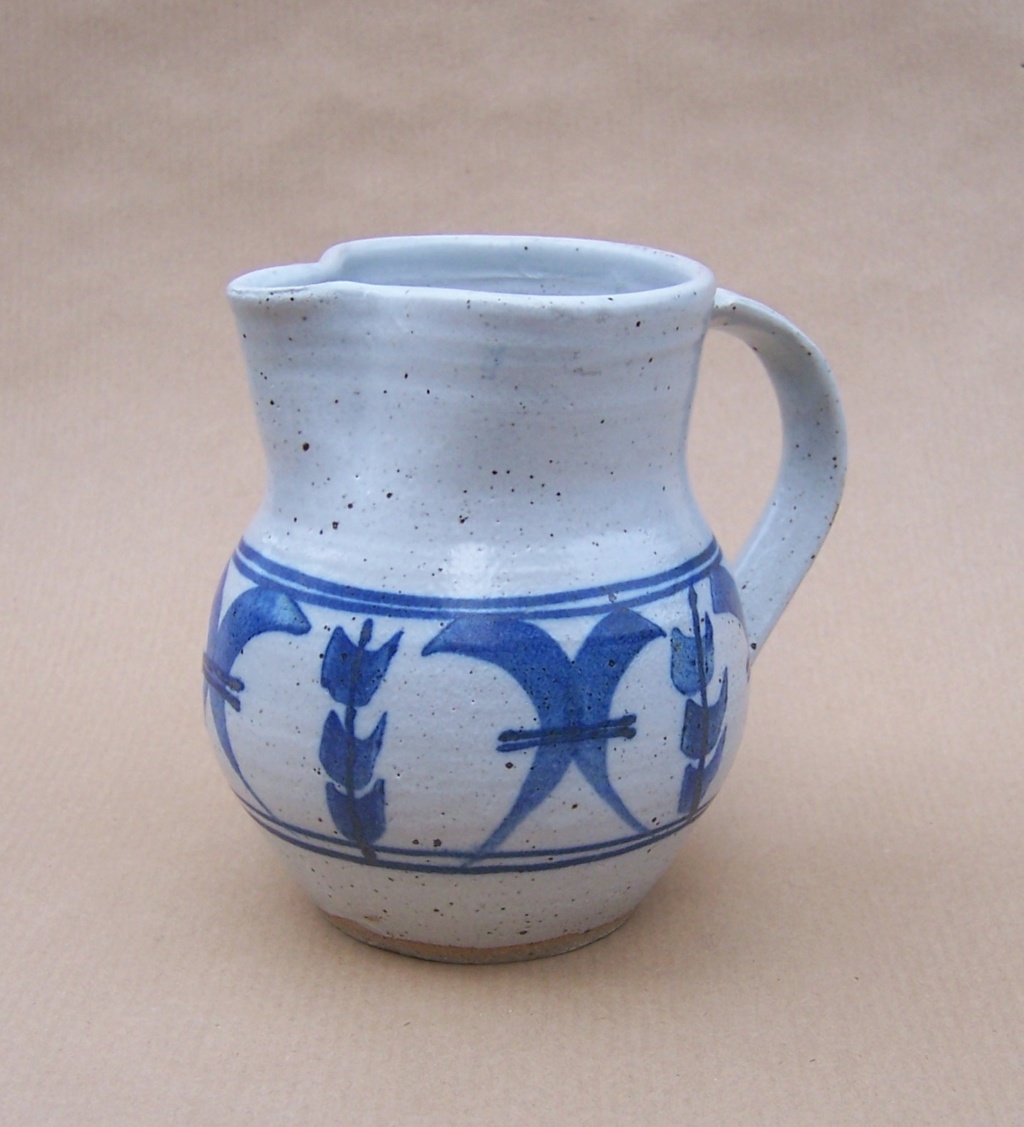 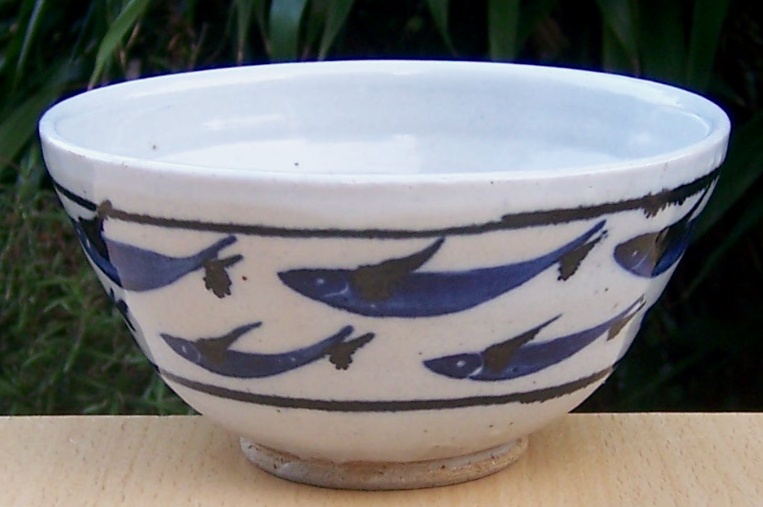 They were around 6 cm high and 12 cm diameter at the top and when Ursula had her first exhibition with me in 2000 the retail price was £18. They went up a little over the years to £25.

Dead Ringer for your bowl as well. Maak auctions does bring up some prices that you start questioning.. ??
This was a teapot in 2017 which went for a much smaller price than that! 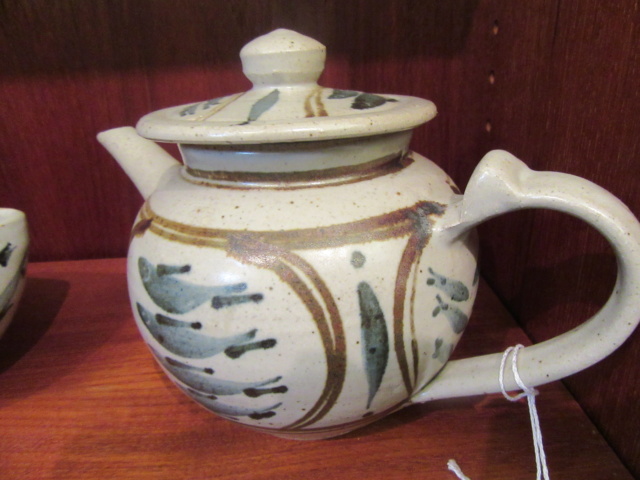 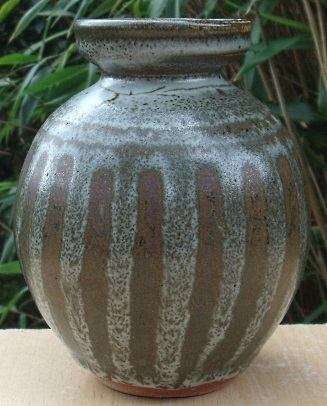 A stoneware vase with wax resist decoration, which was an uncommon form of decoration for Ursula's work.
_________________
Now you should know by now that Potty and I need to see your bottom - we're funny that way! 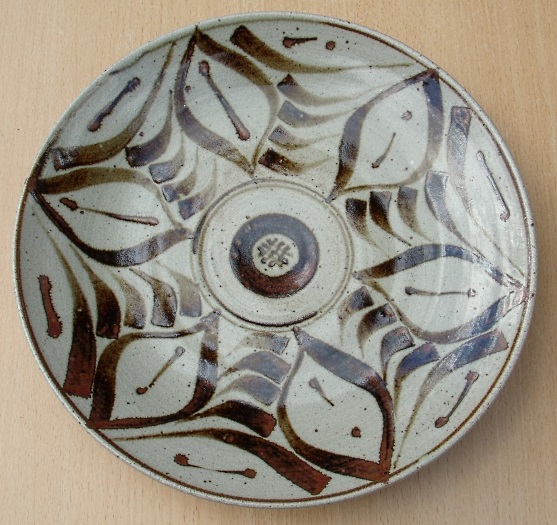 A large stoneware plate with iron brushwork decoration.
_________________
Now you should know by now that Potty and I need to see your bottom - we're funny that way!