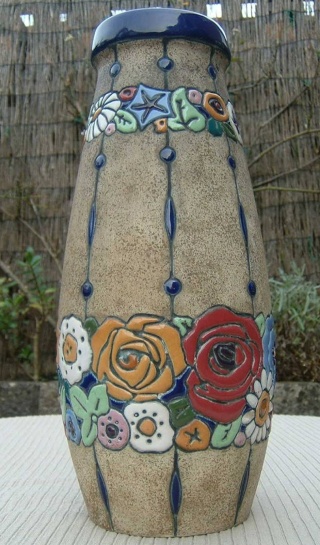 Hi all, my first post., well apart from my intro. This is some of my Amphora collection. Apologies for the flash...N facing room. I'll post better photos later. This is a mixture of both Austrian and Czech Amphora. Same place but pre and post WW1, the potteries staid still...the countries moved

Just for scale, the centre bottom vase is 13" tall.

So, my photo tent arrived, and a degree in Origami needed to fold and unfold it...or is it just me

No matter, I can't see that it makes that much difference, apart from a nicer backdrop and I think I need some more lighting. Anyway...to some photos.
I'll start with the largest piece...not the tallest, but by far the biggest. It's 13 inches tall with a maximum circumference of 32 inches.

I'm not sure what the back is meant to represent....the carapace of a trilobite and magic mushies, who knows, I've often wondered about Amphora potters

Anyway, the impressed markings are the Austrian Crown, Amphora and Austria in ovals and in the circle it reads Imperial Amphora and Turn (now Trnovany, Czech Republic), with the double headed Austrian Eagle in the centre. The numbers are 11011 and 04. I'm still working out what these mean, but they appear to relate to the size and shape rather than colouration. This was made in the dying days of the Austro Hungarian Empire, pre WW1, about 1910 probably. The records of most of the potteries in the area are non-existent, WW2, fires, bombing and the like has taken it's toll. The Turn Teplitz area is only just across the border from Dresden.

14 inches, a jug. The backstamp dates it post 1918. Czecho-Slovakia only having come into existence in 1918 with the cessation of hostilities. The Amphora pottery was nationalized by the Nazis in 1939 and does not appear to have come back into existence post WW2. So this piece was definitely made between 1918 and 1939. However, judging by the decoration and comparing it to other pieces I have I would date this to 1918-mid 20's, maybe a bit earlier. Howard Carter discovered Tuts tomb in 1922 and Europe sort of went Egypt mad. A lot of Amphora pottery displays this influence. The back is the same BTW.

Can I have some please

are all of your Amphora pots molded?

Hi dantheman. Yes all moulded. I'm not sure about some of the earlier stuff by designers like Paul Dachsel and Ernst Wahliss, those were the high Art Nouveau "Monsters and Maidens" and way out of my price range. My Amphora, I suppose, is all Secession and Jugendstihl. All my stuff is Amphora Werke Reissner, the only partner left after the Stellmachers and Kessel had gone their own ways by 1905. Here's a link to some more info......
http://antiques.about.com/od/pottery/p/aa032009.htm
I'm gradually learning more about it. There are very few records left, however, of the potteries during the dates I'm interested in. There's a couple of books, but these deal mainly with the earlier stuff, and they are expensive. My local library wasn't interested, so I suppose I'll have to buy one one day...but that's cash not spent on pottery

This vase is also 12.5 inches tall, and features a duck design. Amphora produced a series of birds on their wares including ducks, terns, kingfishers, owls etc. They were very popular. They also covered a large part of the firms history, being produced in the early 1900's right thru to WW2. This one has the post 1918 Czech stamp on. Amphora also produced their designs in a number of different sizes, the same pattern and colouration being used on vases ranging in size from 4/5 inches right up gigantic hall vases/umbrella stands. I spoke to a Great Aunt about the stuff a number of years ago now, she didn't collect it but could remember it on sale before the war. She said that it was only sold in the "classier" and more expensive shops, unlike Clarice Cliff which was on sale everywhere. How true that is I don't know. Anyway, here's a couple of ducks....

Different shape, but also 12.5 inches tall. It also features the post '18 Czech backstamp and is probably from the 30's. Strange one this. Apart from the top and bottom borders which are truly Amphora and couldn't be anything else, I would say the design is very reminiscent of Brit Art Deco of the era. The simplistic stag and landscape, "fluffy clouds" and "lollipop" trees wouldn't be out of place on one of Clarice and her Bizarre Girls pots. Of course there was a lot of "cross fertilization" of ideas amongst European Potteries at this time, this appears to display that.

Another vase, and another bird, 10.5 inches this one and a kingfisher. A very popular Amphora decoration. Again post 1918 Czech, and a heavy vase, a lot of Amphora is very light in weight and fragile. There's some research to be done in this area...but I'm still learning.

And as an aside, I've just been out in the garden with the dogs, and one of our local Peregrines is hunting overhead...you want to see the pigeons shift

And here's two. Same shape, same size (8 inches) same decoration, but different colours. The backmark displays the same number,15072. Which is a single number sequence, unlike most Amphora, where there is also a 2 digit number. The Amphora stamp is also unusual. It is not shown in Ginnis. However, until I find differently, I am assuming that this dates to between 1910 and 1918. The crown is more or less the same as the impressed stamp of 1892-1910, but printed, which I feel should place it towards the end of the period and closer to the printed mark of the Czech work post 1918. These were not purchased as a pair.

And this one is 11 inches, and shows a striking similarity to one of the previous ones which I've shown again, apart from the size and the fact that it is more bulbous at the bottom. The colours are identical, 'tho the decoration is not quite the same. The number of the pot is also very similar being 15069, but the stamp on this one dates it to post '18.

This one is 13 inches, Czech post '18 stamp again, Amphora Czechoslovakia, although there is no "made in" I feel that this is probably from the '30's. Adding credence to this is the fact that the stamp in this instance is Czechoslovakia...NOT...Czecho-Slovakia. The country immediately after WW1 was named Czecho-Slovakia, but became Czechoslovakia, in I think, 1920. I believe the original backstamp was used for a number of years after that however (economics probably) Intriguing anyhow

And now, into the realms of the strange. There's no backstamp on this at all, however, I believe it's from the late '20's early '30's. The decoration reminds me of pre-Columbian central American art. The handles, given the time period 'tho, I find vaguely unsettling.....

And I've got another piece with very similar handles...anyhow, here it is.

And this piece is unfortunately, damaged. Broken around the rim and not too cleverly stuck together. But it was very cheap (a fiver or so) and one day I will have it professsionally restored. It's too good and too unusual not to have. It's an Imperial Amphora two spouted vase/jug thingy

, pre 1910, and despite the damage is one of my favourite pieces.

And I don't know who the lady is, but Amphora did a range of classical figures...or maybe she's a generic Russian Aristo..who knows. It's something else I shall have to research

And that folks, is it for the day. But I shall leave you with a taster of what's to come. Ignore the Gouda on top, I'm just doing Amphora at the mo but I haven't got anywhere else to put it

Another bird, I'm not sure if it's a peacock or a pheasant....pretty whatever it is.

A classical warrior on a horse...not sure if it's Greek, Roman or one of the Turkic tribes...or just generic

Not marked Amphora...but unmistakeably so.

A tazza this time...more flying SS's

Back to Austria, pre WW1 and the Campina range...more birds, Owls this time.

Another classical figure..post 1918. This pattern was also made earlier with the Austrian stamp on it.

Hello. I just bought my husband an "Amphora" water pitcher, but I'm worried it's an imitation or a very modern copy (or something) because I haven't been able to find an online example of the mark.

The guy in the shop told me it was perhaps 1920s, but I'm beginning to have my doubts. 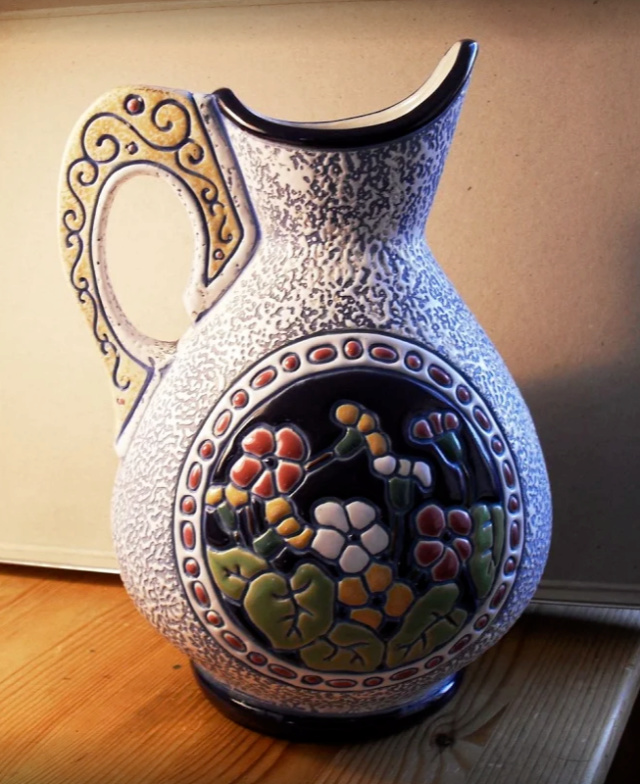 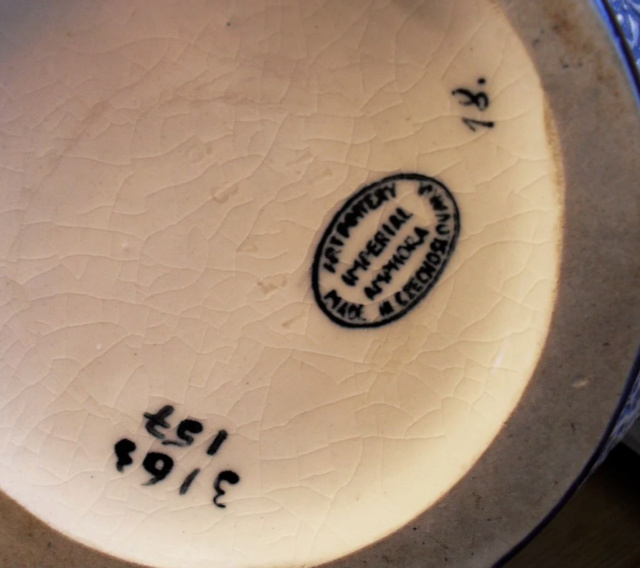 Well to start of I know nothing about Amphora.

But I would say I'm quite sure that this item does have age, I'd have thought late 30's, but I may be wrong.

Is the oval mark under the glaze or over it?