I'm a big fan of the post war designs of Colin Melbourne for Midwinter and Beswick although I've yet to own any. I found out today that, sadly, he died in August this year so thought we should start up a thread in his honour and hopefully some of our members will post up photos of their own pieces here.

Below are some links - the first to images of some of his pieces and general information, the second and third links to online obituaries.

Can anyone help me with this bull? Looks very Colin Melbourne to me, maybe Midwinter, no mark, just an impressed number to the underside. I can't see that CM did any bulls for Midwinter, but I might have just missed it? If not, what do you think?

and here is a beswick connection .

Thanks Ed! That's marvellous, the number just didn't look right for CM, although the shape is very similar to his bison. I wonder if they copied the style or if it is just generic for that period (I think most Trentham pieces are roughly 1950-60ish? )

Well, Lynne , you could still be right with Colin Melbourne , he designed for beswick, who have the trentham connection .

That's true, although I think that was later than the 1940s when Beswick used the Trentham name. But it is certainly similar in feel.

Good to put a name to it anyway, it was starting to annoy me!

I think I was wrong in these dates, certainly they would be right for CM Beswick, but Ed's article about Beswick shows the Trentham name being used earlier. 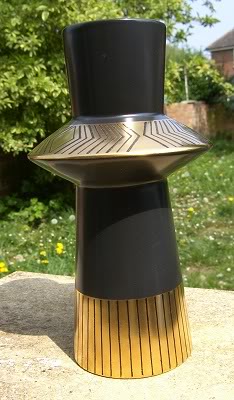 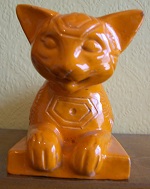 Found this Beswick vase signed by Colin Melbourne some years ago, but I know nothing about it, don't know when it was made, but looks fantastic with its matt glaze and bright yellow interior. 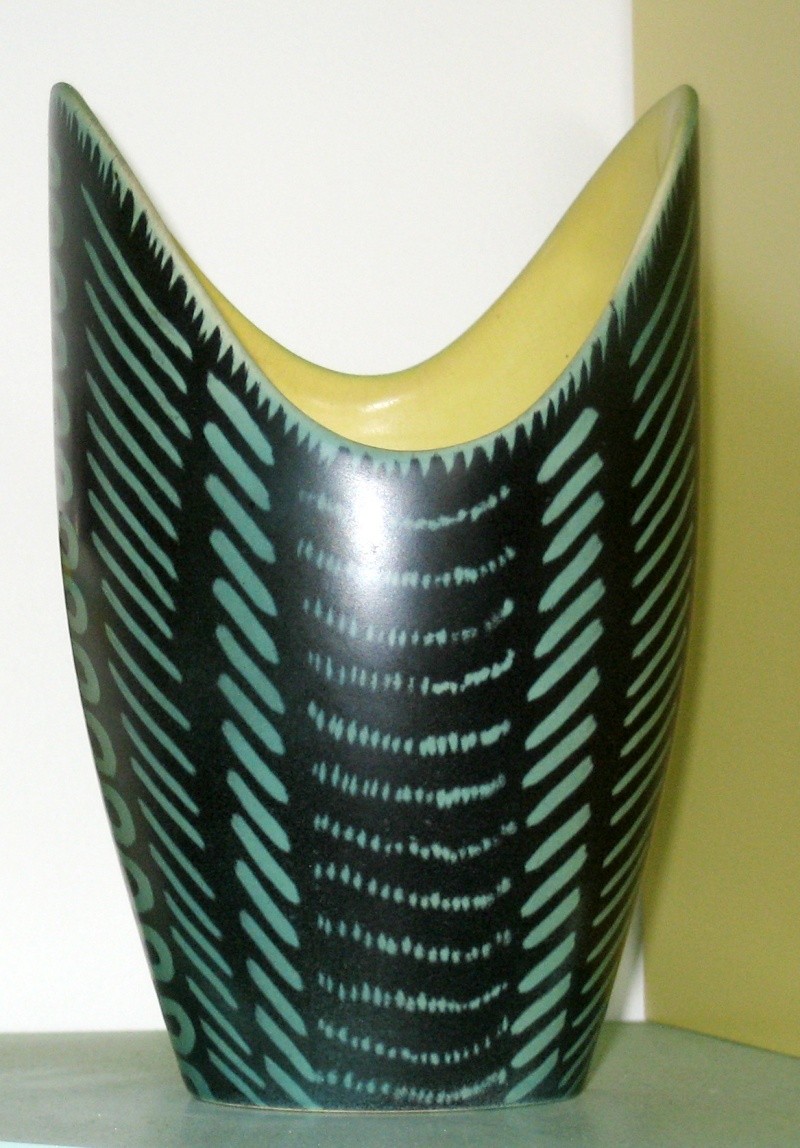 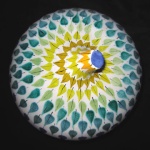 Hi all, I have one of these satin black bulls, I bought it from a Beswick animal dealer, he told me that it is by Colin Melbourne and had been confirmed by his family. There is also one designed by him for Trentham Bone China Ltd, which was a small factory that was only open from 1952-57, some of the moulds were later used at Bovey Tracey pottery and have a foil label 'Trentham Art Pottery - made in Devon' which I believe was used from 1959 onwards.
It is thought that he designed several animals for Trentham in 1955, before moving onto Beswick in 1956, my black bull (the same as this one) has several subtle differences to the Trentham one that I also own. In addition the black bull has Beswick on the underside of one foot and Colin Melbourne on another, these marks look handwritten in pencil the dealer who sold me the figure informed me that the family confirmed that these marks were correct. The family informed the dealer that the black bull was designed for Beswick when he went for a job there, and that is why there are close similarities to the Trentham example.
I will post some photos later so that you can see what I am talking about.
As for the dealer quotes - there was no written authenticity, but he is a longer standing member of the Beswick Collectors Club and has been collecting and dealing in Beswick for at least 15 years - he has had a stand that he has had on a regular basis at a fair that I have been visiting for all that time.

Vase shape number 1402, designed by Colin Melbourne in 1956, in production from 1957 and discontinued by 1963, available in various colours including copper lustre.

Thanks so much for that Nik, I've not seen another of these since I first posted this, I'd love to see the two different ones and a note of the differences for future reference.

Just took delivery of this vase today - Royal Norfolk, 'Petra' range by Colin Melbourne - nice piece that shows off his design skills - there are a few in this range to collect so I will be looking out.

Any more info on his work for this pottery welcomed. 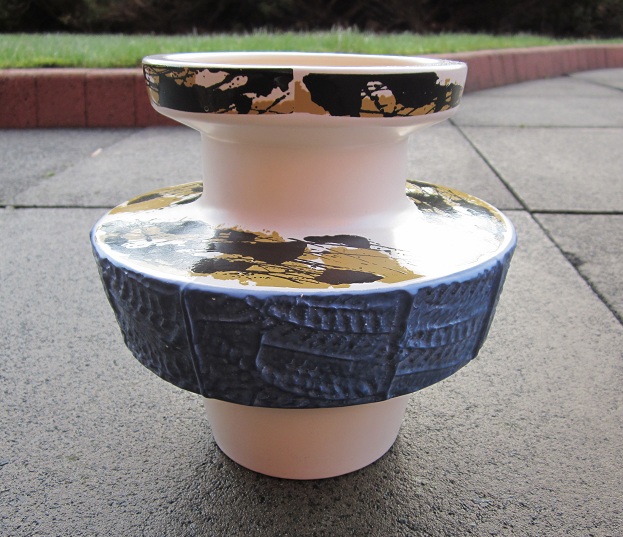 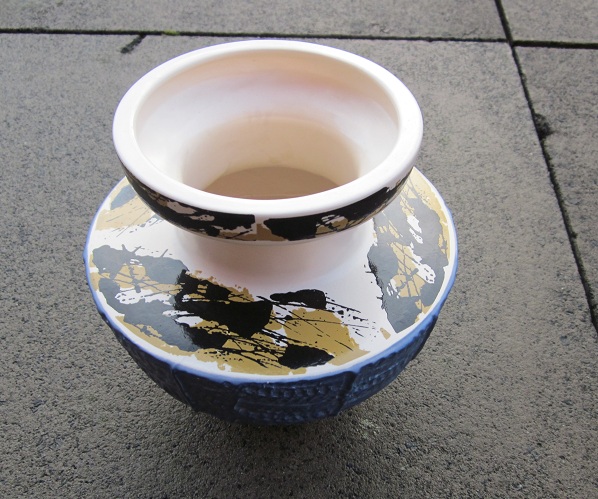 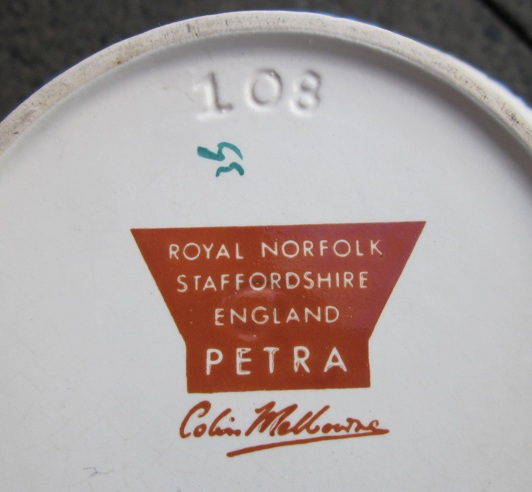 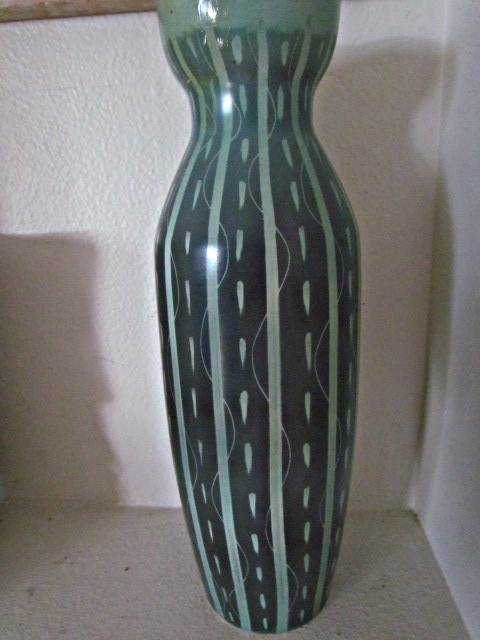 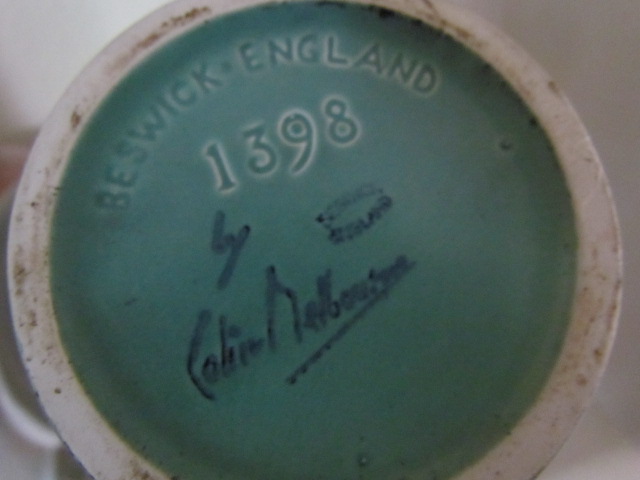 This is a mid-1950's vase designed by Colin Melbourne. See here for more info 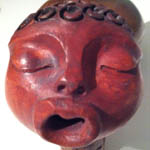 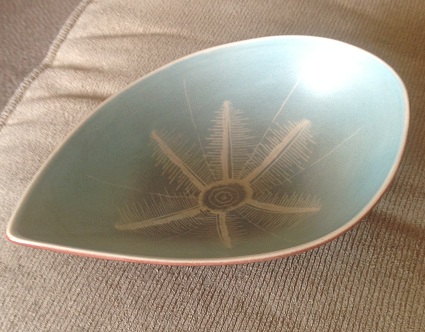 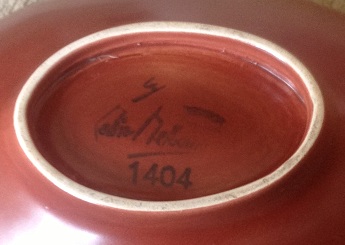 Colin Melbourne for Beswick , Zebra from the CM series. 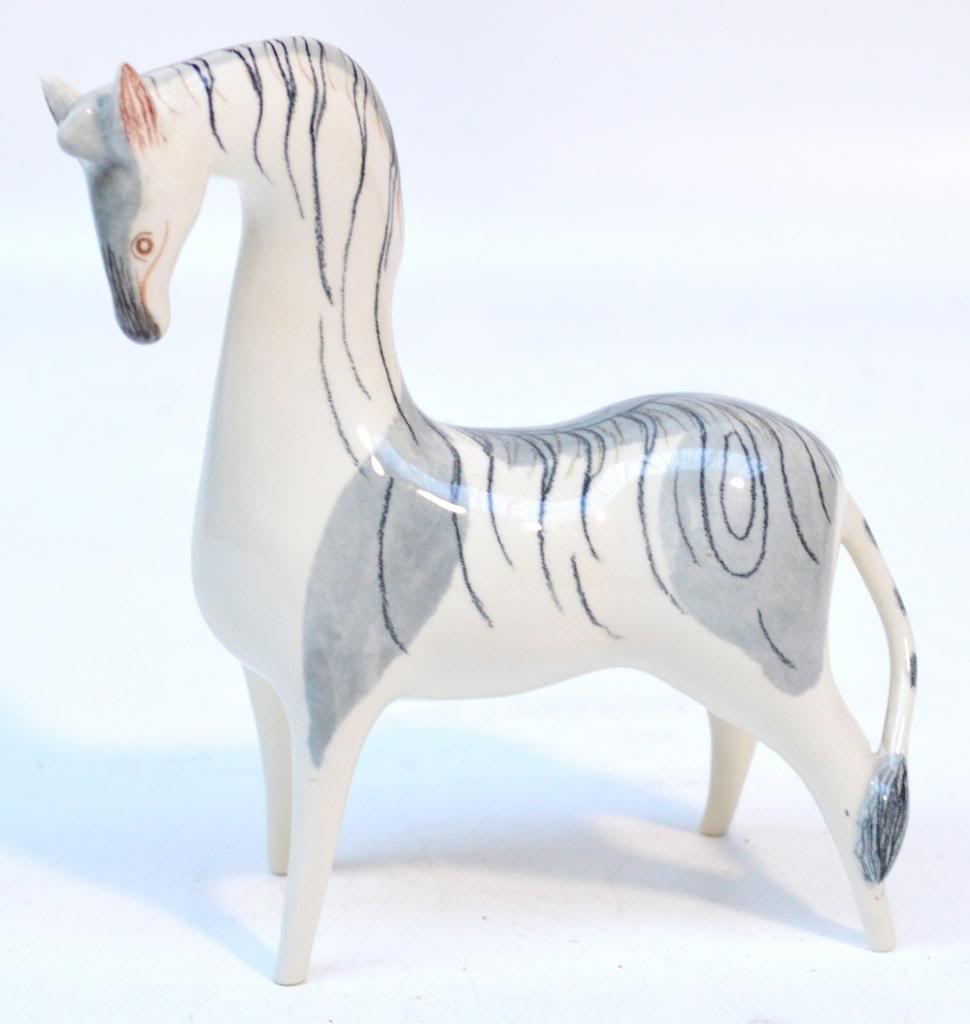 Can anyone help me with this bull?  Looks very Colin Melbourne to me, maybe Midwinter, no mark, just an impressed number to the underside.  I can't see that CM did any bulls for Midwinter, but I might have just missed it?  If not, what do you think?

Picked up one today (will post photos shortly). Listed on numerous sites as a 1950s-60s Trentham Bull no.409 designed by Colin Melbourne. They even come in Trentham's distinctive orangy-red glaze with light blue/green highlights -

Dark green glaze with orange spots. Numbered 409 between the forelegs and stamped Made in England under the glaze between the hole and the back legs (only visible with camera flash). 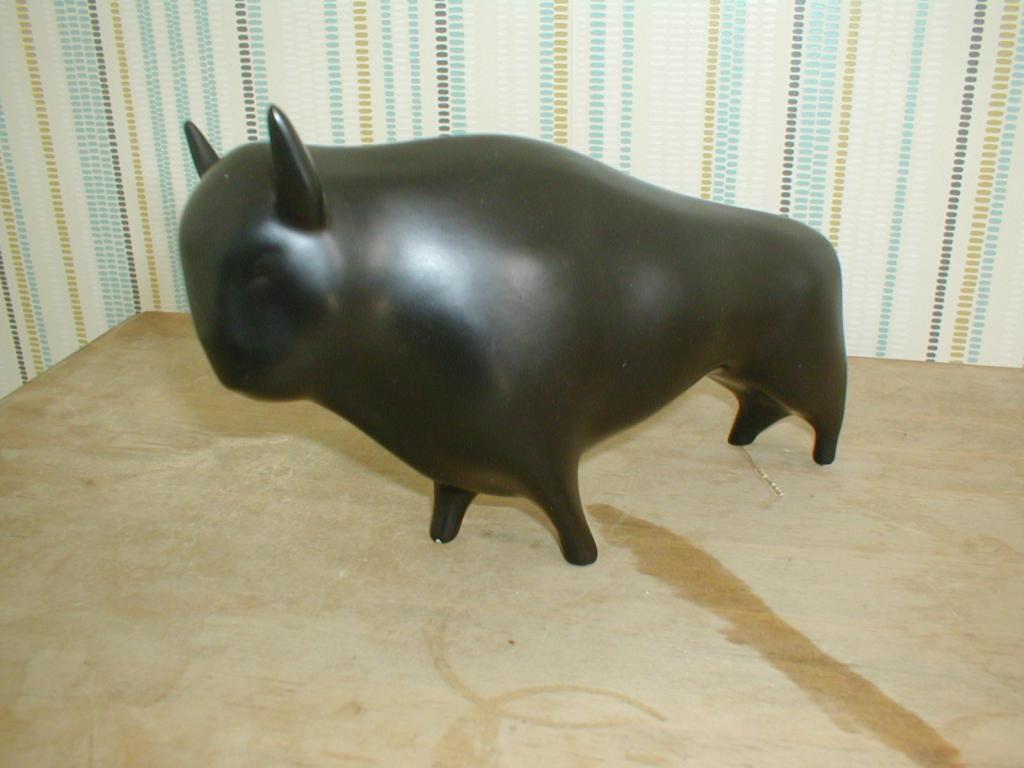 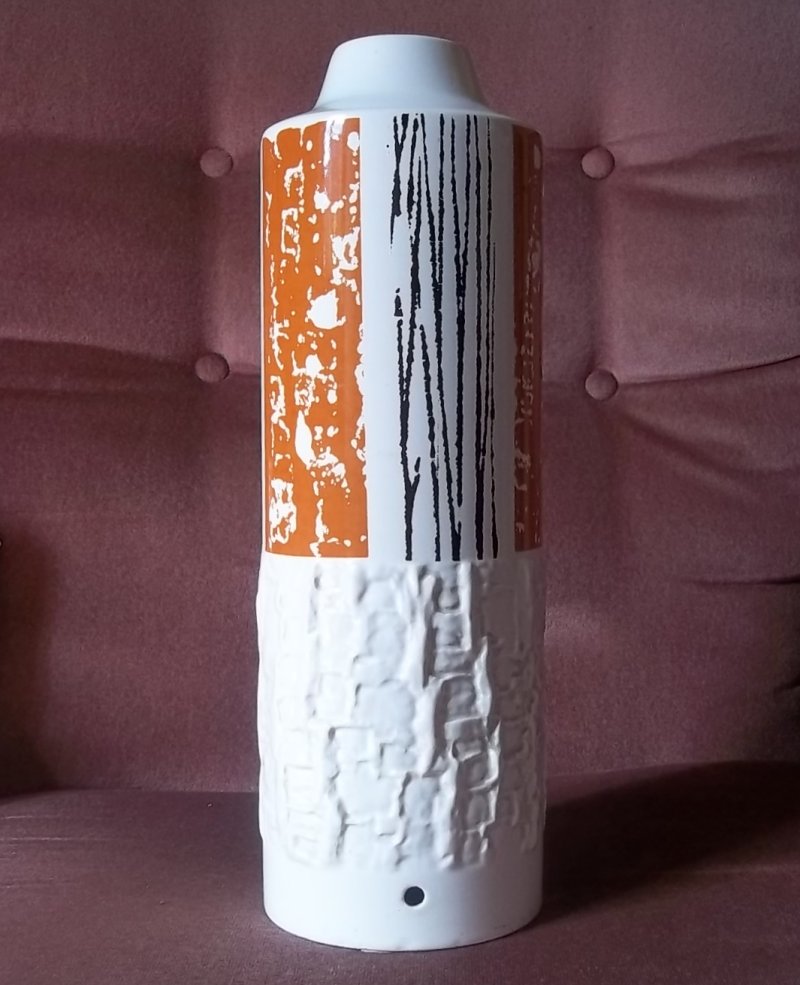 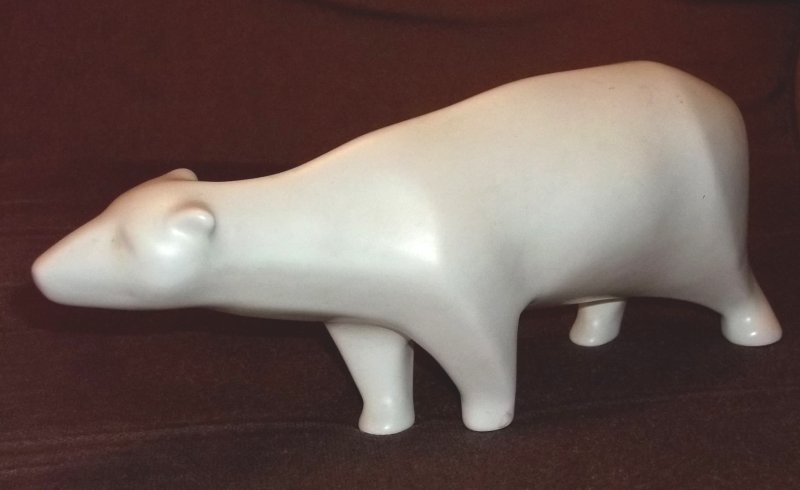 Here's the bull converted into a moneybox - you can just see the slot on the top.

Is it Trentham or Beswick? 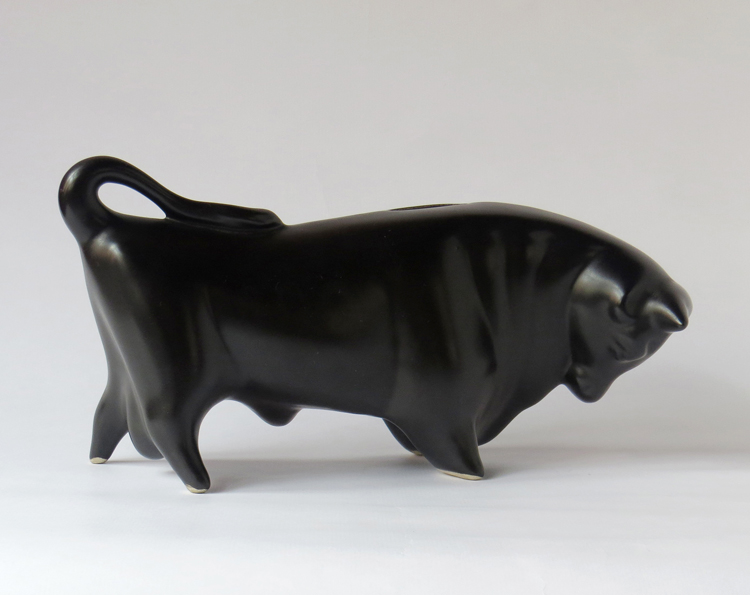 These are Trentham, with the up and over tail.