who is E W Usher

who is E W Usher

Does any one know who E W Usher was,
ie, were born, who they worked for etc

Plates arnt valuable , but I would like to know more about the artist/designer

I would be interested too. My great aunt had a harbour scene which I inherited when she passed away. My memory is dim now, but recall she once said she bought it from a local artist on holiday?? This would probably have been when she was married soon after the 2nd world war, as she was very fond of bus trips to south coast resorts likes Torquay. However the only other references to this artist I have come across were on a Canadian website.....but the scenes seem too twee English for an overseas connection surely? Please post up anything you find out

Check out Guildcraft Ware , I think there may be a connection , Ed

Greetings from the land Downunder.

I have just noticed your post asking for information concerning E W Usher, he is or was my dads brother, my late uncle teddy, Probably born in India as his father was a regular soldier as was my Father Charles Walter Usher. Edward was a talented artist but as a youg child sufferd from ( I Think ) from TB of the spine and spent long periods in hospital. Uncle Ted was I guess what you would call the first " Hippy " long before the term was used. At University he had long shoulder length hair and beard, wore red suites and kaftans, you have to remember most of what I'm telling you are things my parents told me and my Mum had a scrap book with cuttings from newspapers of the time with stories about Teddy, I'm not sure when he started making his wall plaques but I understand he was quite successful for a while and had factories around the world.
As a child I met him quite often and last time my wife and I were in the UK we spent a week with him and his wife Leo, I have a number of photos if you are interested.

Here is some information that Tony sent about EW Usher, I don't think he would mind if I reproduced it verbatim;

"Here are a few more bits of information and photos on my Uncle Edward ( Teddy ) Usher, My family lived in Manchester ( Cheetham Hill ) closely connected with The Manchester Ice Palace where my Dad Charles his dad also Charles, my Brother Clive all worked, my Grandparents live next door to the Ice palace in an old Police station that connected to the Rink.

As a young guy I remember Teddy living in an old Victorian mansion on Cheetham Hill, he and his wife Violet ( Who changed her name to Leo later in life , I don't know why ) and baby daughter Elizabeth had a one bedroom flat at the very top of this house, a fantastic place with a huge domed ceiling in the bedroom that you could get an echo if you lay in the middle of the bed , I loved to take mates there as there was nude drawings of Violet that Ted had done that actually showed pubic hair, unknown in those days !! He also drove a Sunbeam Alpine very cool.
Teddy and my Father never seemed to have much of a relationship, something in the past I guess, anyway Teddy started to make the wall plaques and became semi famous and made quite a lot of money and moved down to the Painton in the South of England .

Sylvia and I emigrated to Australia in 1966 and now live in Queensland after spending our first forty odd years in Sydney we last saw Teddy and Leo in 1983 when we were in the UK for an extended holiday we spent an interesting week with them, Ted was one of those people who was a great story teller but also a great listener one of the worlds true odd balls, small in statue from his childhood illness but huge in ego." 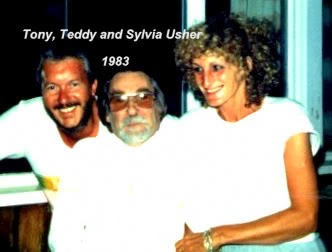 I have picked up this post ŵhilst researching L Usher. I bought a small collection of ceramics recently, all hand painted and signed L Usher B'ford or L Usher Nelson, or just L Usher
Some are Crown Ducal items. Could there be a connection with E W Usher and Leo Usher. Does anyone have any information on L Usher.

I just read this thread for the first time, this sort of result really makes this forum a very special resourse

Edward William (Teddy) Usher was a talented artist who exhibited work with the Manchester Academy of Fine Arts in the 1940s. He attended the Manchester Muncipal School of Art for many years (mid 1930s - mid 1940s), studying modelling, pottery, design and architecture. He had a business designing and making, in particular, very fine wall plaques. I estimate that he began this business around the end of WW2, or just after. He later moved from Manchester to Devon.