He sold a lot of his work through the Devon Guild in Bovey Tracey, which is not very far from you. We bought a substantial number of our pieces from there.

I should have recognised it but to be honest I think it’s only the second or third piece I’ve ever handled. Is it called a hatching egg vase?

Lol no, no, much more mundane, things like torn oval, split pierced form and yours would be opening form?

“Opening form “ looks right. They do look wonderful, all the different shapes and textures. Thank you Crawford.

Jack of all trades master of none. Alan stuck to one thing and got it right 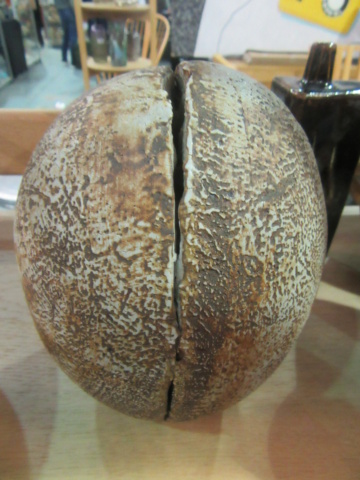 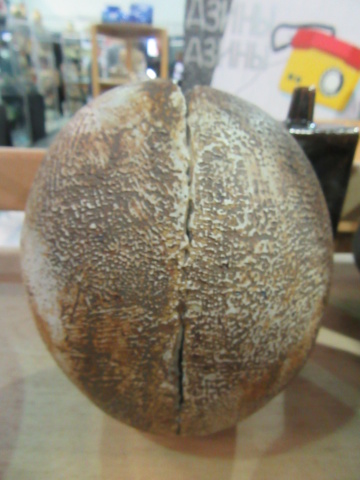 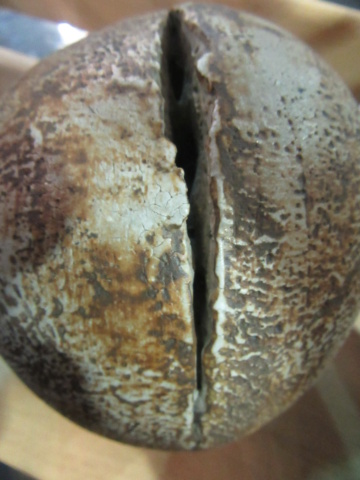 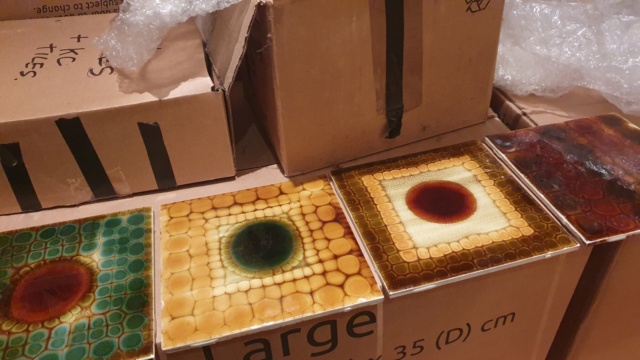 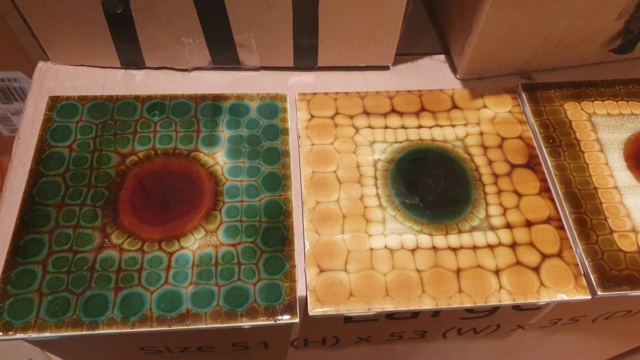 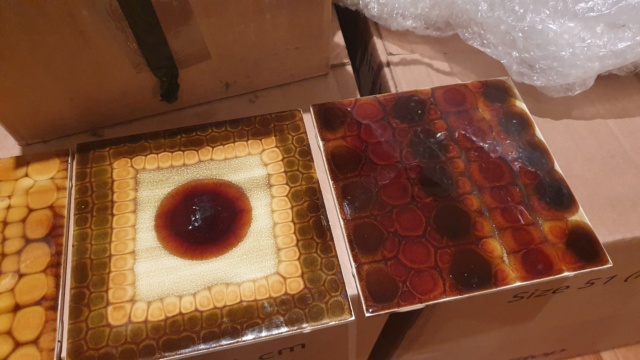 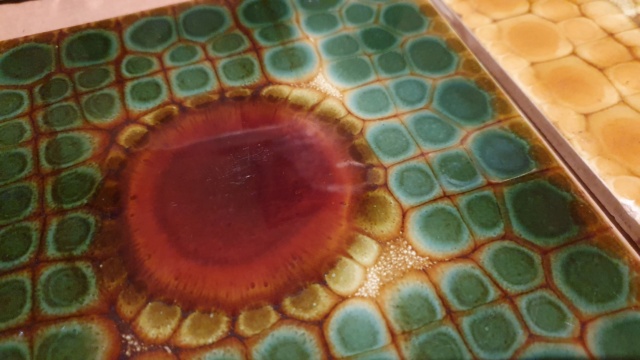 Got this 31cm vase today, with the usual W scratched on the base... 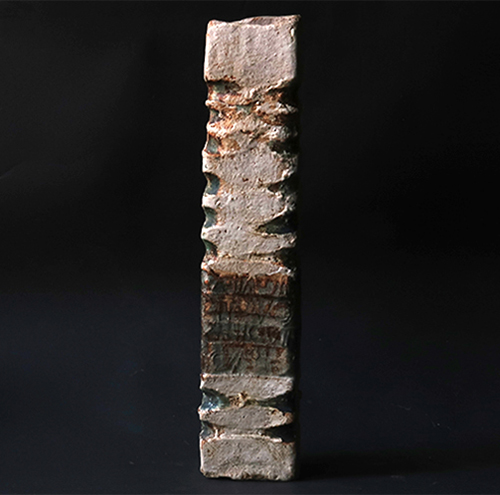 I would not say that the W marked vases would be a good investment. They were after all produced by a team. so there are a lot more of them around.

philpot wrote:I would not say that the W marked vases would be a good investment. They were after all produced by a team. so there are a lot more of them around.

There is some debate over the W mark and the 'team'. Someone said Wallwork made them too, others have said they were glazed by the Team, others that the Team were employed to decorate the tiles.
This piece looks like it was all Wallwork's work, so I suspect the 'team' attribution is a myth, but collectors like an AW mark over just a W mark so if it is a myth I think we're stuck with it now
_________________
Carrot cake is just fake cake

Alan told me that he had assistants making some of the basic shapes, which he would do too, depending on how big the order was. In this case, if an assistant was involved, then all they would have done would have been to make the basic shape.

Alan told me that he always did the "arty" bit - in this case make the grooves, the marks and then glaze and fire.

There is no reason why Alan would have lied to me and it is exactly the same workshop process, with the use of assistants, that Shoji Hamada used, except more input from Alan in all of Alan's work than Hamada in most of his.

The tiles were different in that Alan only had a supervisory role in their product, except for one or two trial ones that he had done himself.

philpot wrote:I would not say that the W marked vases would be a good investment. They were after all produced by a team. so there are a lot more of them around.

I don't think that they are appreciated as much as they should be because they were a new departure when he began making them. I believe because of this that they should have more importance in the "collecting world" but that world generally doesn't work that way. I would never tell anyone to collect anything because it was an investment, they should buy what they like and what appeals. However, as these are cheap to buy now then the logic is they ought to go up in price or at worst remain at the same price.

The W mark was the first mark that Alan used and it was never meant to differentiate between standard "Wallwork Pottery" pieces and personal individual pieces. He began using the AW mark in the early 1960s on some large individual pieces that were specifically made for group exhibitions, usually abroad. I remember seeing one marked, AW 1963, that was part of a British studio pottery exhibition in Copenhagen. However, the AW mark didn't come into general use until around 1970 (Alan couldn't really remember the exact year). In the early days of the AW mark and the change over to the pod/organic forms, Alan still had assistants and they would make the pods before Alan did the "arty" bit.

By the time I first met him in the late 1980s, he was working alone, with the exception of trying to get his kids involved...... without much success. However, Amanda, his daughter, is an artist, who I did exhibit at the Harlequin alongside her dad, and Dillon, his son, is a designer of couture hats and headpieces with an international reputation.

Thanks for that input Studio. Very interesting and informative. Probably just my personal prejudice about the W stuff! The AW stuff is amongst the first studio pottery we evet bought, back in Bovey Tracey Devon Guild well over 25 years ago. Close to my heart!

philpot wrote:Thanks for that input Studio. Very interesting and informative. Probably just my personal prejudice about the W stuff! The AW stuff is amongst the first studio pottery we evet bought, back in Bovey Tracey  Devon Guild well over 25 years ago. Close to my heart!

I understand your prejudice and also the one about unmarked pieces that you often express, as I come from the same time and collecting background. I had exactly the same prejudices but have changed, slowly.

However, from experience, I have found that the newer, younger collectors are less hung up on these kind of things.
_________________
Now you should know by now that Potty and I need to see your bottom - we're funny that way!

dantheman wrote:do you like it or is it for investment?

I've never bought things with that in mind, Dan. I like it a lot - the photo doesn't really do it justice.

It'll go with my collection of other Wallwork pieces, plus Rooke and Louis Hudson, Bob Dawe and Pamela Nash. I'd actually like to know if/when Louis worked as an assistant with Alan or Bernard in London.

My recent buying has been spurred by an exhibition I'm curating here - to be held some time in 2023 - of British pottery from the 1960s and 70s. I pitched the idea of 'brutalism' to the Yingge Ceramics Museum, partly because it's a latter-day example of Brutalist architecture. There'll be about 50 pieces to show I reckon.

I was there on Tuesday. Here's a snap of one gallery space - lots of glass, exposed concrete and steel... 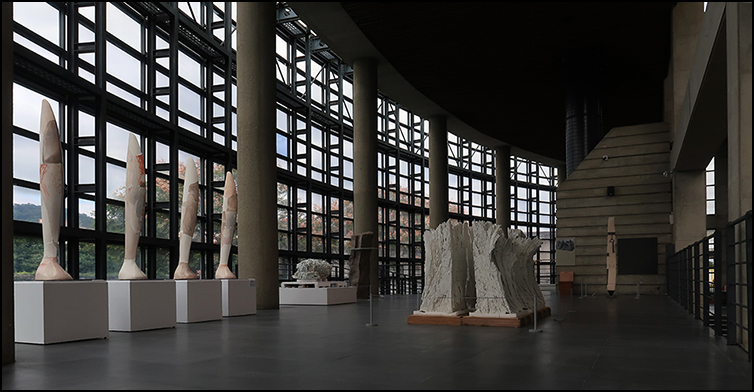 The museum has two temporary exhibition spaces and I don't know which of them my show will be in yet.

Before I went this week, I was hoping it would be the one in that photo, as I know it has a lot of light.

My last exhibition (Poole) back in 2015 was in the lower floor area, which has little natural light. However, the exhibition on there now looks good. My photos may seem dark, but the pieces were well lit and the blue paint gave some contrast... 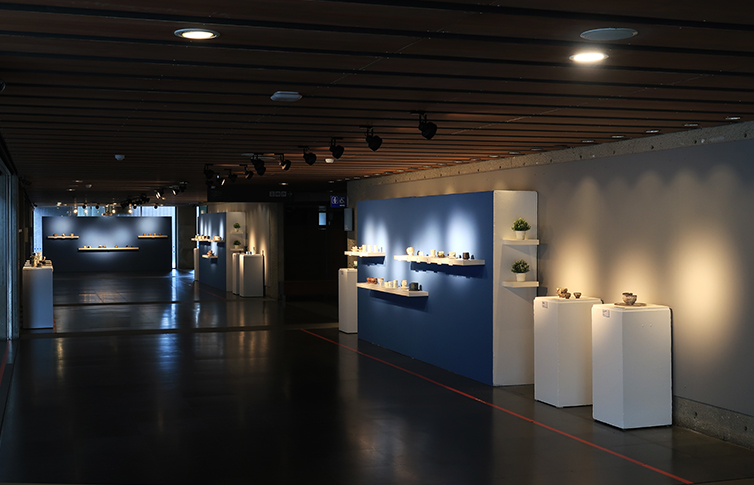 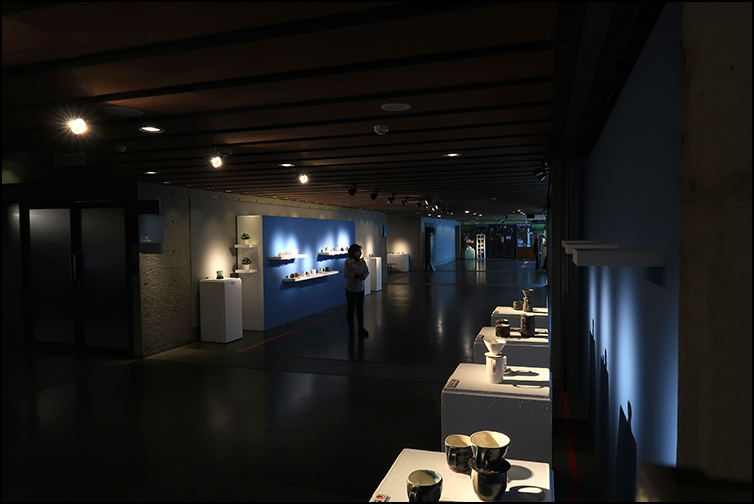 Louis Hudson worked as an assistant to Alan Wallwork in Greenwich, London before moving down to Cornwall to start up on his own. Somewhere in this thread there is mention of Alan letting him take a kiln or something with him, which he was supposed to pay for later but never did!

Alan had his pottery in Greenwich from 1960 until 1965 but still had the lease on the Greenwich building for longer. He sub-let it to other potters until he was able to sell the lease but I am certain Hudson left Greenwich before Alan did or perhaps around the same time.
_________________
Now you should know by now that Potty and I need to see your bottom - we're funny that way!

I am trying to determine if this is an Alan Wallwork, I think I can see a faint W 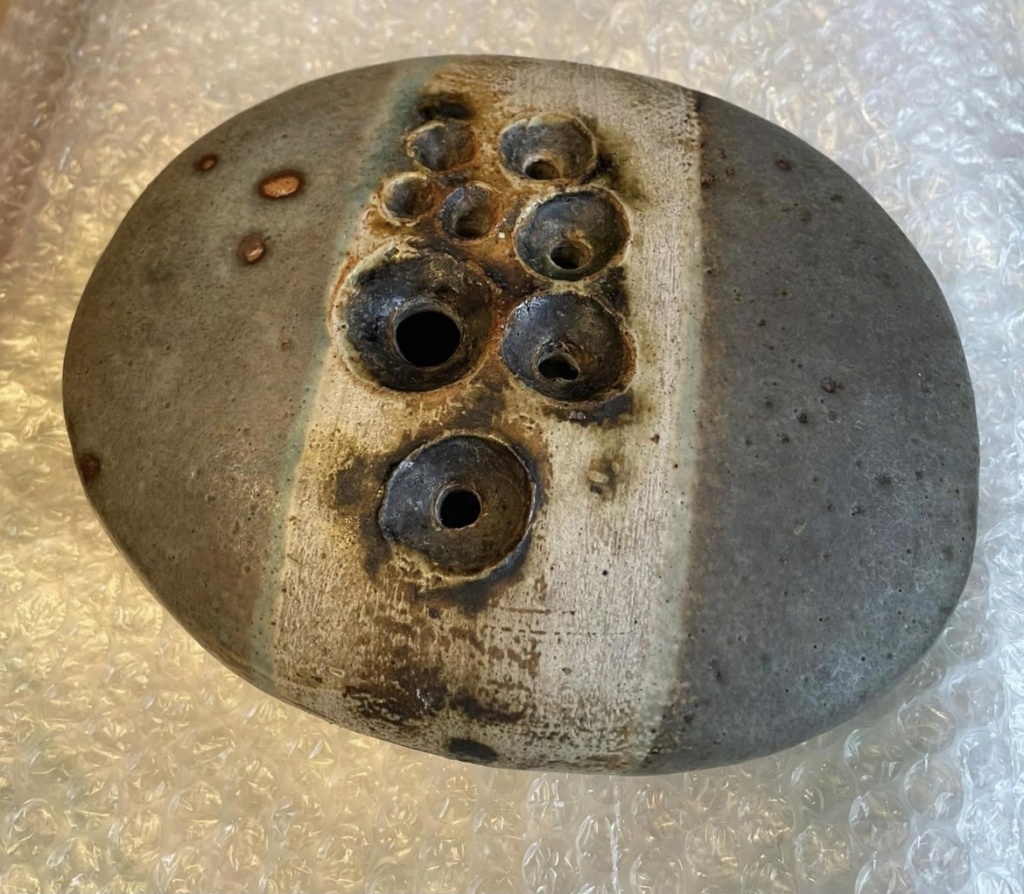 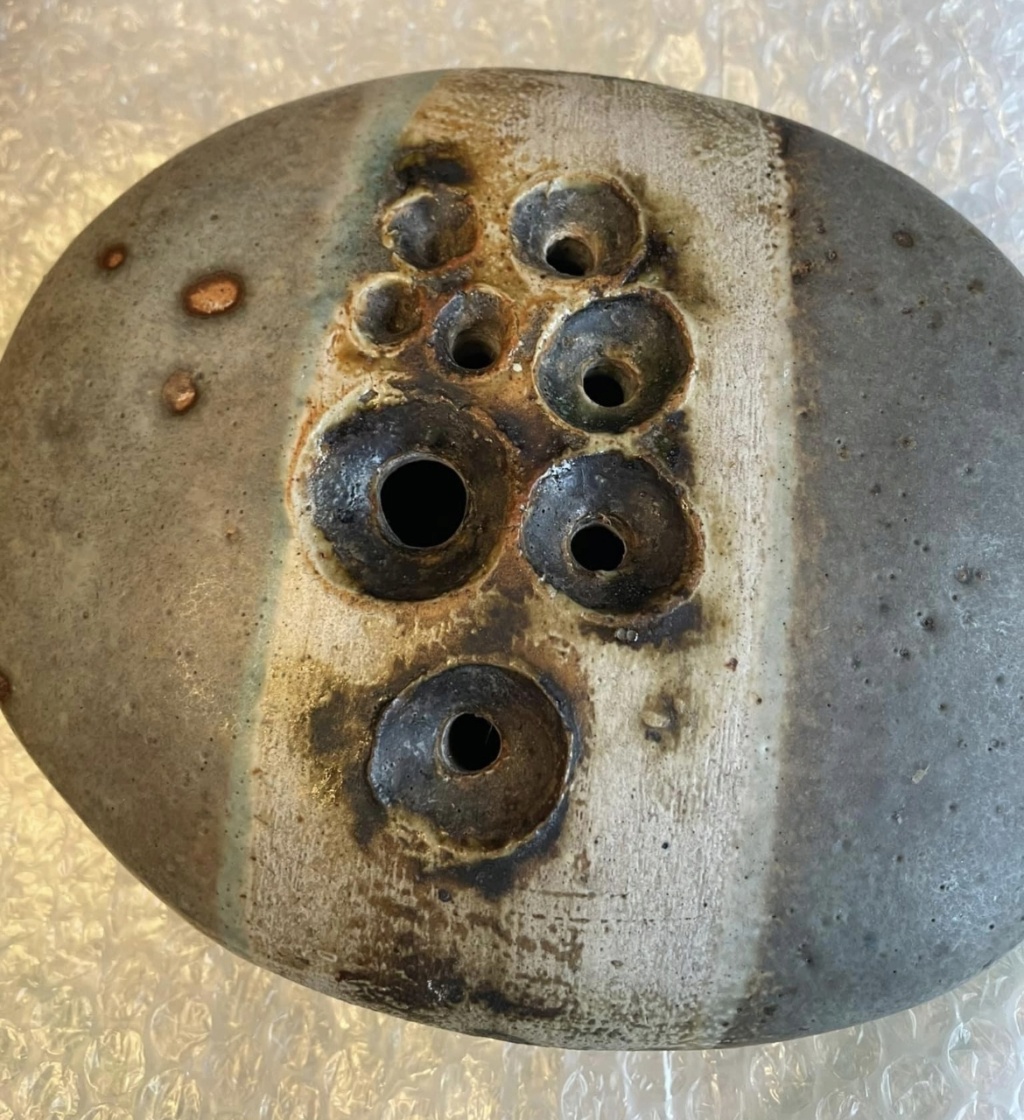 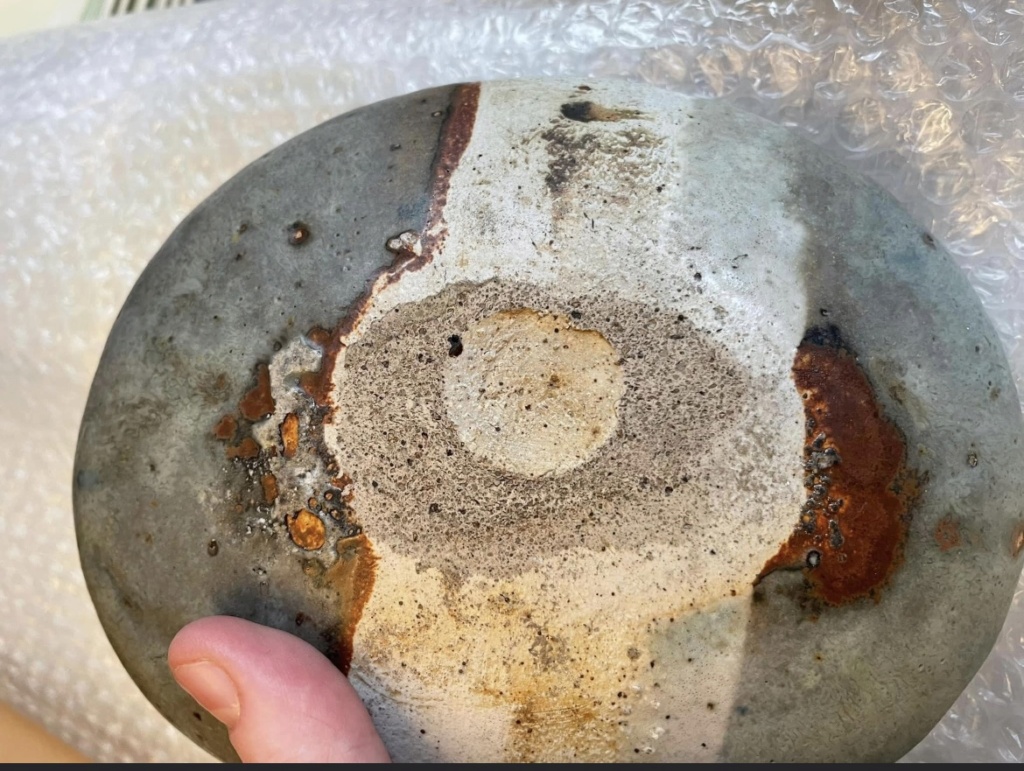 Yes. There's one on his official website, towards the bottom of the page. Just has a W mark. Produced in Greenwich 1960-65

Very many thanks much appreciated

So, would you say the earlier (coiled) Louis Hudson pieces date from post-1965, and were made in Cornwall?

I've often wondered what happened to Louis. He seems to have dropped off the face of the earth.

That looks as though it will be a very interesting exhibition!