We hardly see any Blenko glass here in the UK and sadly this is the only piece I possess (and it's not that amazing either is it!). Still - in the hope that some serious Blenko collectors/afficionados will happen along - I'm starting up the thread with my little paperweight.

Looks very nice Pip, I must admit I have never owned any of the blenko glass , I think I was put off by the arabic type shapes , big pointy things , Yuk .

Do you both mean the tall decanter type things?

Yes sue , They are known as bottle with teardrop shaped stopper, but the technical name is .......big pointy thingy, not really my thing although did enjoy the Tv show with phil Silvers .

I am new here and from the US... I collect mid-century art glass and have numerous Blenko decanters etc. Would be happy to post some pictures if any are interested. Further have many resources for any who are interested. My inspirations expand into Scandinavian, Finish, Danish Swedish ie, rhiihimaen Lasi, Holmegaard, per lutken, Nanny Still, Murano, Barbini etc. I am hoping to expand my knowledge and authentic collection of the "European" glass makers and hope this web sight can help!
Cheers

Thought I'd add a few blenko pieces for you guys.
Enjoy 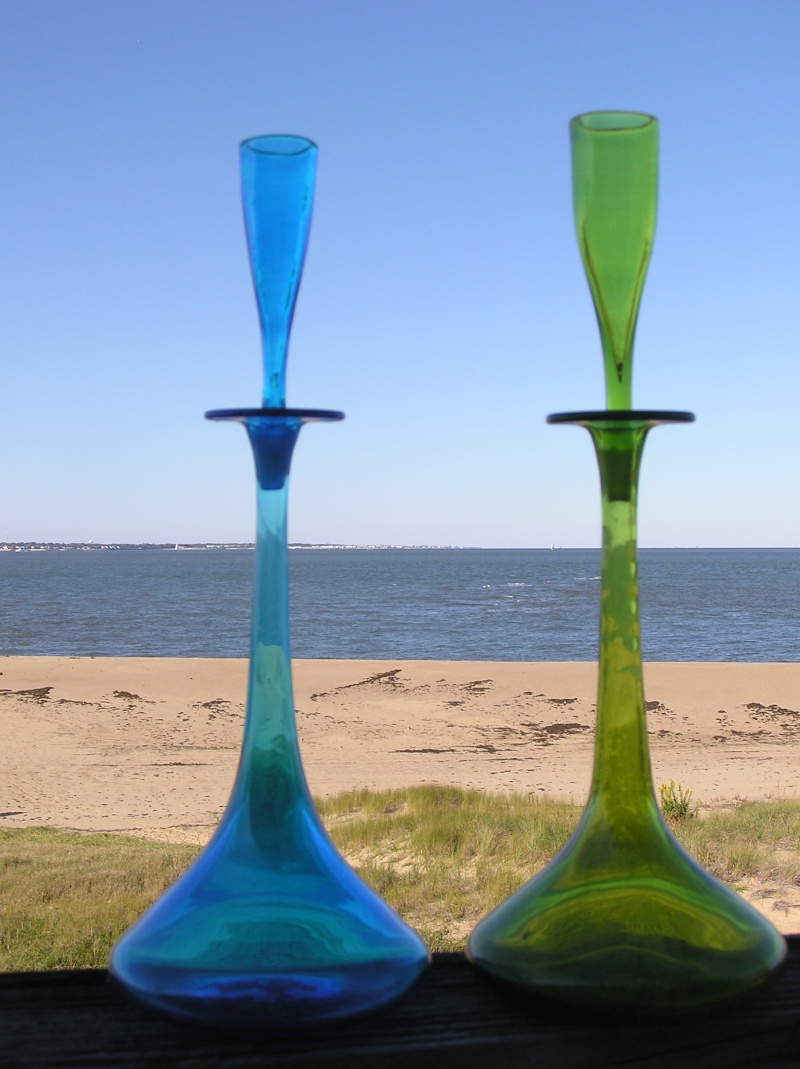 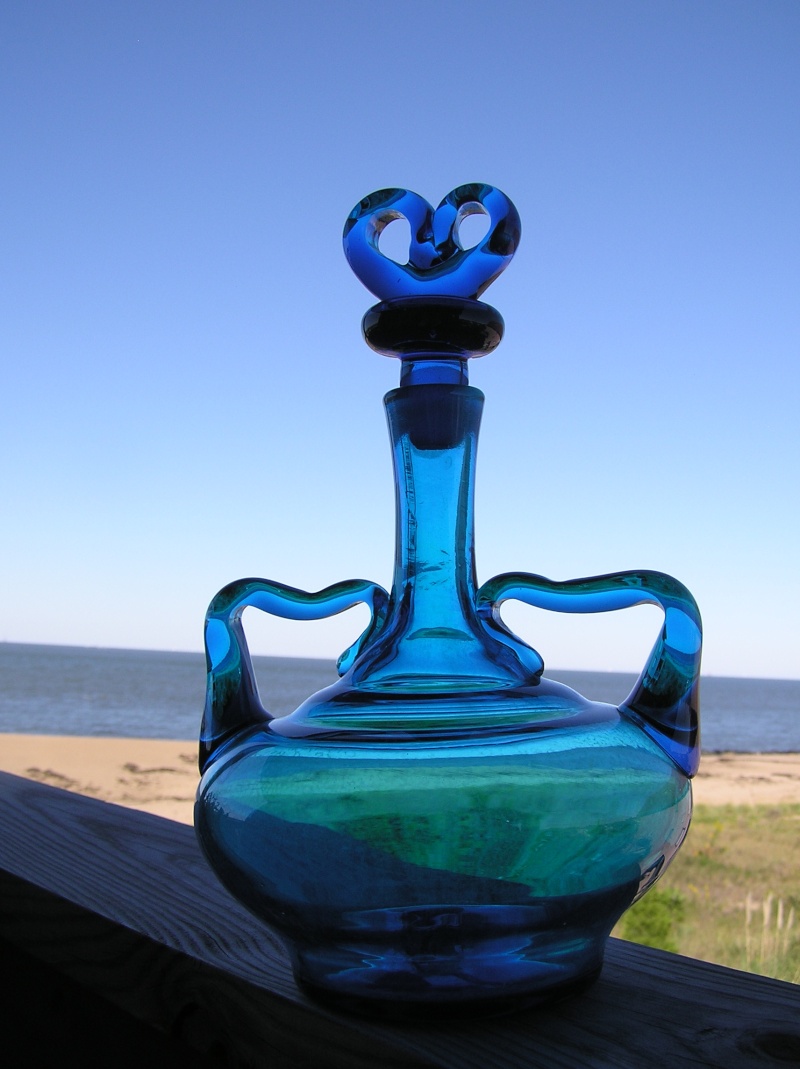 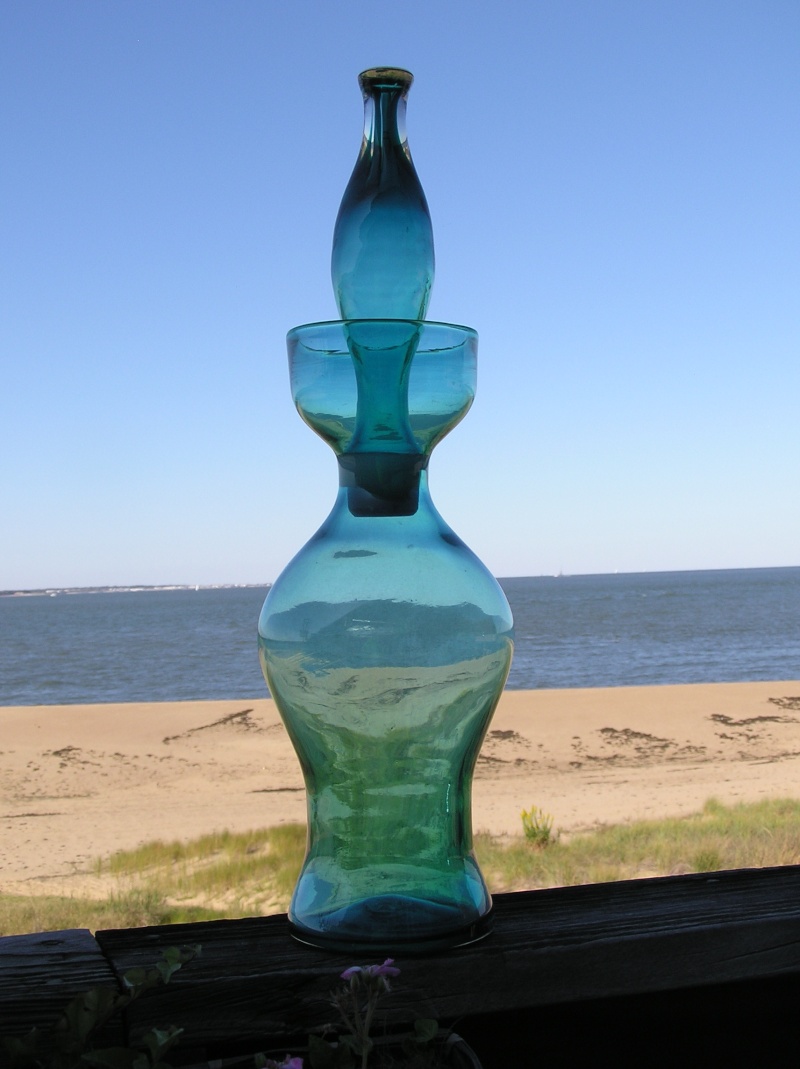 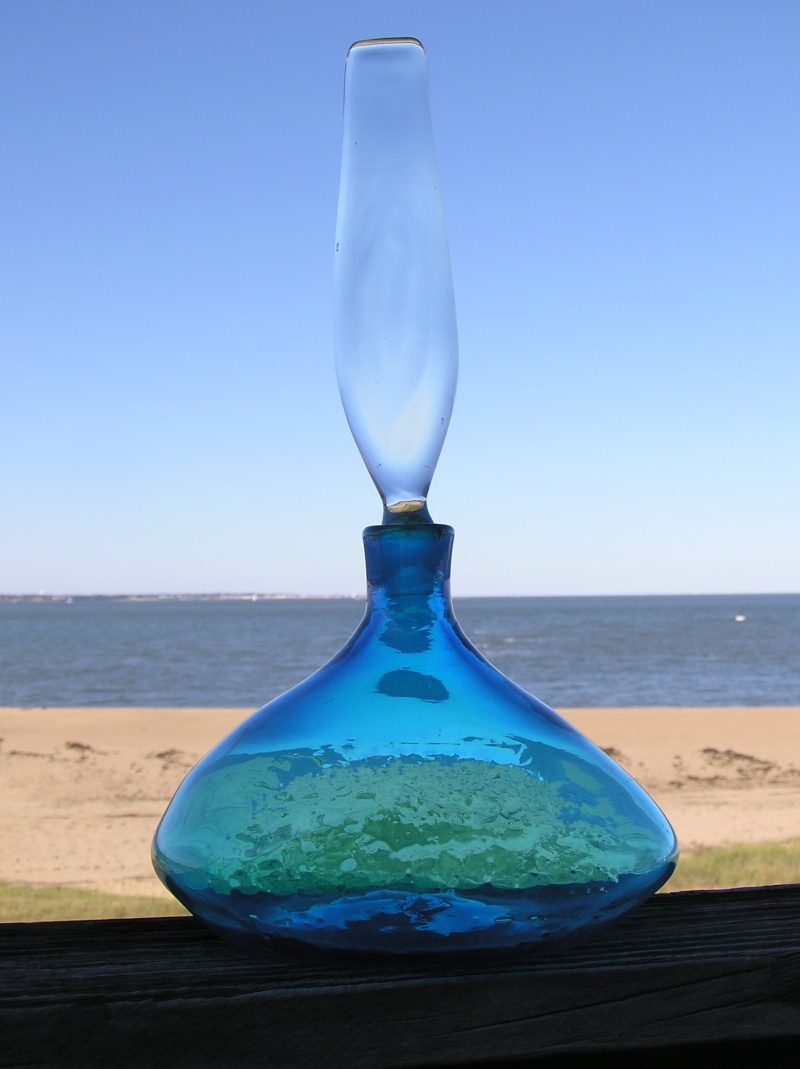 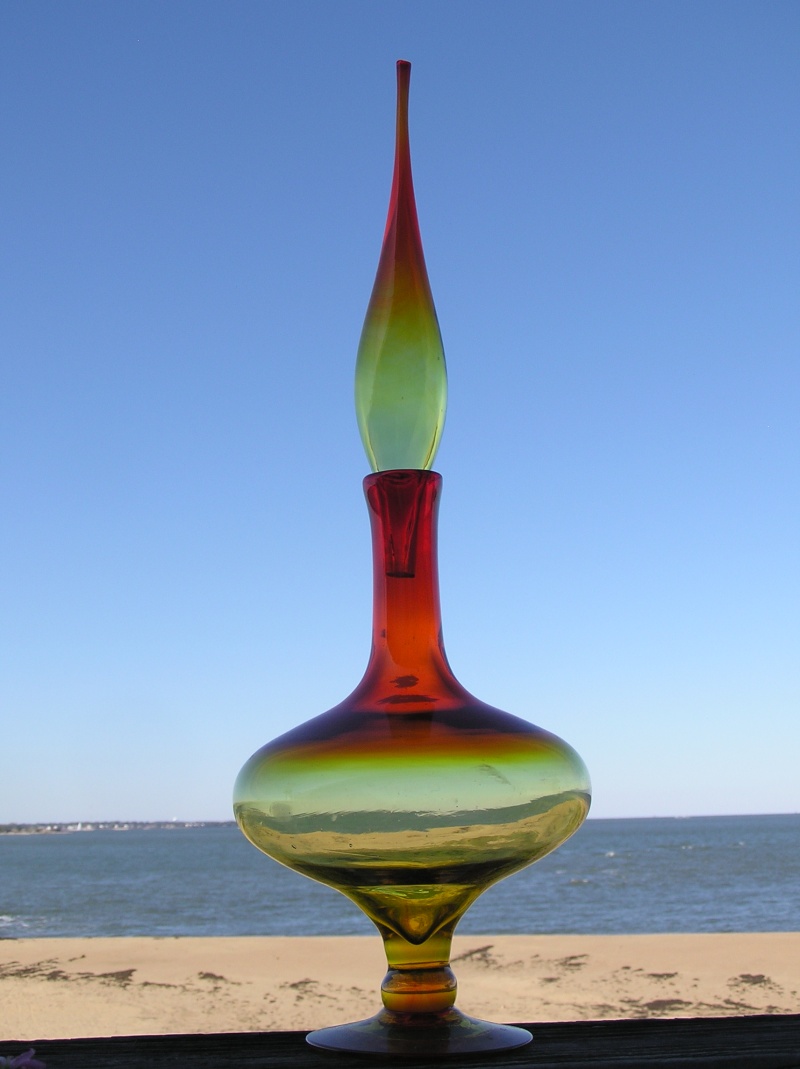 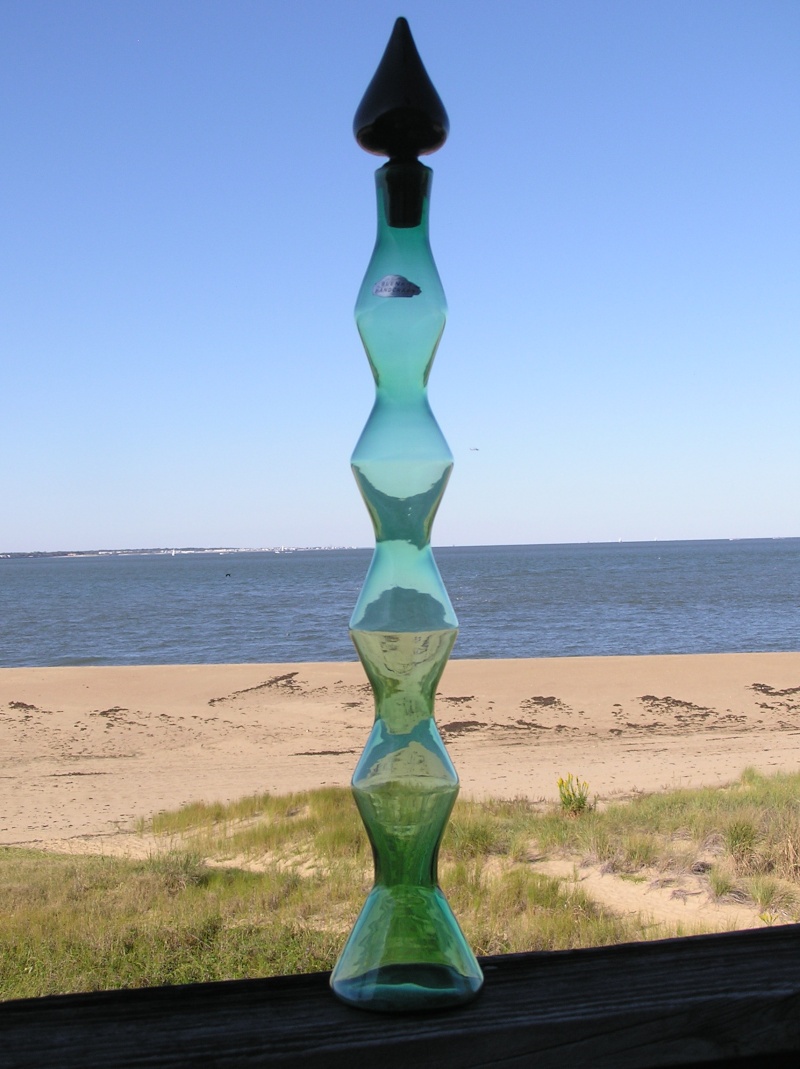 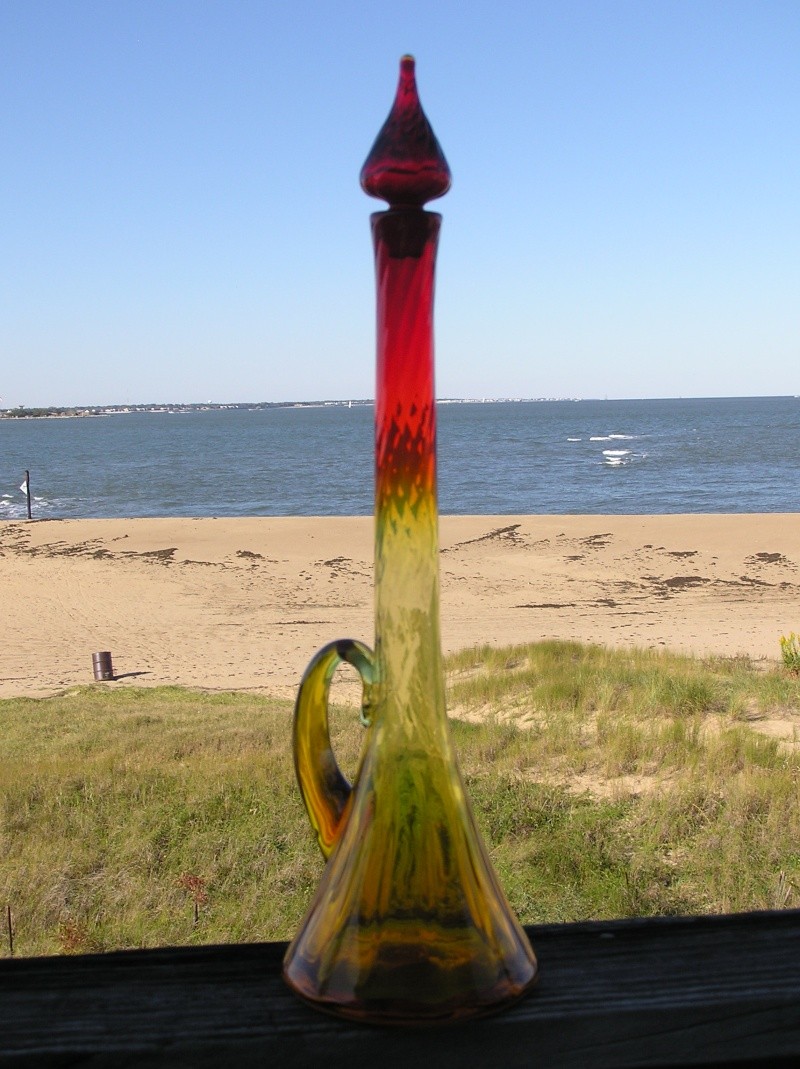 Wow, those are lovely! Not what I meant at all, much nicer.

skay wrote:Wow, those are lovely! Not what I meant at all, much nicer.


I think you're probably thinking of those mass produced Italian tall pointy decanters Sue - Blenko is in a different league altogether, I'd love some of those decanters (and I'd love the beach view too!).
_________________
Text & photographs

wonderful! Some of the best glass pics I have seen posted here.
For me glass is all about the refraction of light,as a child I spent many,many hours watching the sunlight stream through my Grandmother's glass collection.
_________________
"Changing your mind when you know what’s happening and you don’t like it. That’s what democracy is all about"

Wow! Those decanters are beautiful, dabeachiegirls. Looks like you have some pretty old ones.

I've got a few Blenko pieces, too. Mostly pitchers and vases, and mostly in the Tangerine color.

This one is actually in a newer color called Tequila Sunrise.

I collect Blenko, pieces designed by Wayne Husted, Joel Myers and John Nickerson specifically who were head designers at blenko from 1954 through 1974, in that order. Husted was the most prolific and many of the iconic blenko pieces and many of the photos in this thread are Husted pieces.

I am in the US and grew up about 15 miles from the Blenko glassworks so I've had no problem finding pieces, but the really great designs are still a challenge to find. Unfortunately grandmas and the tourist trade have meant the region is awash in pitchers and dinky souvenir glass.

After 1974 there isnt much Blenko worth attention, but the last 20 years have been awful. The third generation of the family, Richard Blenko imagines himself quite the PR genius and he's basically ensured many glass angels and decanters with local college emblems are produced. Even worse he started showing up at glass shows and "signing" pieces. Why would anyone want a glass piece signed by some executive? The final insult was they noticed the appreciation and market value of the pieces from their design heyday rising dramatically they started reissuing some of the simpler ones - but lacking the same quality and craftsmanship.

Blenko is still producing, though they have verged on bankruptcy for the past decade. I believe the problem being they abandoned the ideals of design and artistic vision, in exchange for whatever they could produce and sell in quantity to grandmas and tourist. The reputation they earned for stellar design and quality has kept them afloat for the past 25 years but I only fear they will ruin their own reputation by the subpar pieces they have been churning out.

Recently a ritzy boutique chain here has contracted with blenko to reissue their classic lamp designs from the 50s and 60s. They picked some of the good ones, but missed some of the best - probably due to the difficulty of the design. They are asking between $450 - $700 a pop for the new lamps, so it an odd situation where you could get many of the original vintage lamps for the same or less.

I'll post some photos of my favorite pieces in a few days. Another really spectacular glass company, that employed one of Blenko's master finishers, was called Greenwich Flintcraft. It was a spinoff of a larger glassworks (Indiana glass) and did a entire line designed by Tom Connally. It was only around for a few years and is pretty rare, but it is marvelous. I collect it to and will start a thread about it here if there's isn't one already.

I suppose with the large amount of European glass there was little need for American glass to be imported into the UK, so it probably doesn't get as much discussion here.

Here's a photo of most of the Blenko pieces in my collection. This was a day we were cleaning all the glass, so I put them together for a photo - this isn't not how display them in my house. I can give you the design # and designer name on any of the pieces if anyone has questions. 90% of my Blenko pieces are by Wayne Husted or Joel Myers, with the others being Andersen or Nickerson.

Fantastic collection - the lamp base is particularly impressive ...

mandrake1000 wrote:Fantastic collection - the lamp base is particularly impressive ...

Thanks, it actually might be the rarest piece I own. The only other examples of the lamp I've found are on Wayne Husted's business card from 1954 and in the Blenko catalog from 1955. It's huge and would have been difficult to make via glassblowing methods. It's never turned up on eBay or other auctions, whereas other blenko lamps turn up frequently. It's one of my favorite pieces, both because I love the shape and color.