Poole Pottery up to 1959 & Traditional

Best shape of the 1950's. Originally modelled on the wheel by Guy Sydenham but the production pieces were slip cast. 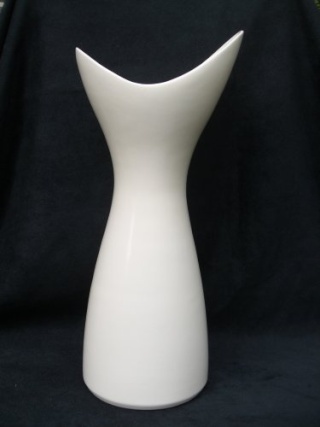 This is my latest eBay buy. I've not seen many of these. its only small about 6" in diameter shape no 762P. One of the fins is slightly bent but I think this might be a problem with lots of Plane ware as the vase in the Hayward and Atterbuy book also has a bent fin.

does this green banded poole pot date from the 1950s?

Have just bought this small pot and it seems to me that it probably dates from 1950s. Could anyone please provide any information at all as I can't trace this pattern, and assume the inscribed and painted numbers underneath relate to shape and design. Thanks John

Another recent Poole purchase is this Leaping Stag? design plate, does this also date from 1950s? Presumably the initials on underside relate to decorator

Thanks Davee, is it possible to date any more accurately? If as I assume the inscribed no 288 is the shape what is the relevance of the painted38

The 288 is indeed the shape, the 38 is the number of the colour combination for the banded decoration. The square impressed Poole mark has been used from the 1930s untill 1996 so that always makes it difficult to date with accuracy but I would hazard a guess at this being 1930s
_________________
skay wrote:

The pattern (JYG) is by Truda Carter was called "Spring". The plate was painted in 1951-54 by Jean Baker. 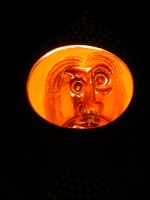 I bought this bowl yesterday,the decoration seems to be from the traditional range but the shape fits into the freeform catagory and is described as a design for slip casting (1956-1957)

Yes Dan, this is one of Alfred Read and Guy Sydenham's shapes from 1956 / 1957, specifically for flower arranging. If I may quote from my article in the Summer 2008 Poole Collectors Club mag (copies still available

"You may have noticed that we have not so far mentioned the word “Freeform” in connection with Alfred Read, even though almost everything to do with Read is now known by this name colloquially. This is because, technically, the term applies only to shape (hence “form”) and specifically to asymmetric, streamlined shapes (hence “free”). Glass designers such as Tapio Wirkkala in Finland and potters such as Stig Lindberg in Sweden pioneered Freeform shapes, also known as Freeflow.

Flower arranging became extremely popular in the fifties, giving a genuine organic element to contemporary living, and gaining status as a decorative art. When the range was displayed at Heal’s in May 1956 the flowers were arranged by Alfred’s fashion artist wife, Barbara, and were said to steal the show. To accompany the range a booklet was published entitled “Flowers and Foliage in Poole Pots”.

The Freeform shapes were decorated not only with the contemporary patterns but also with traditional floral designs, simplified for the 1950’s, and plain twintone glazes, echoing those used pre-war."

Yours is shape 356. According to Potters Life, Guy Sydenham was not a fan of putting floral designs on his elegant shapes!

I've finally bought a display cabinet which I have just finished setting up so I'm in the mood to share it. 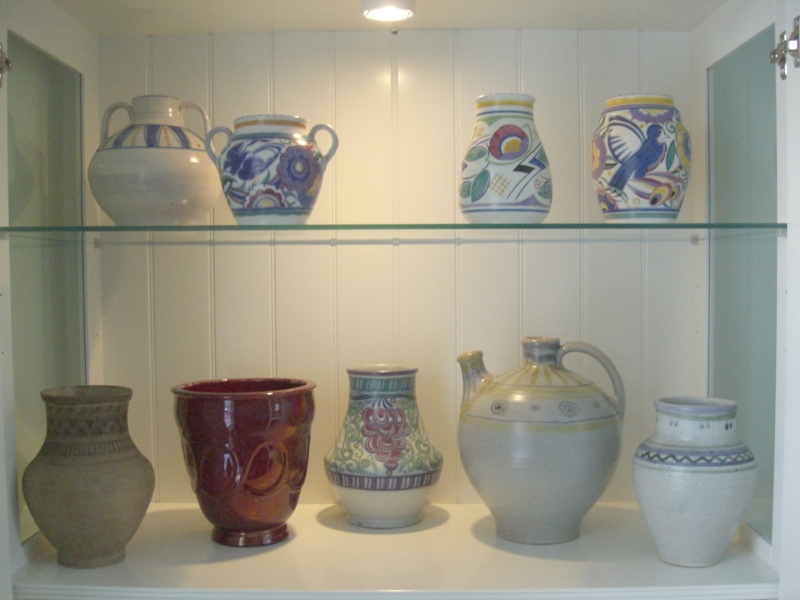 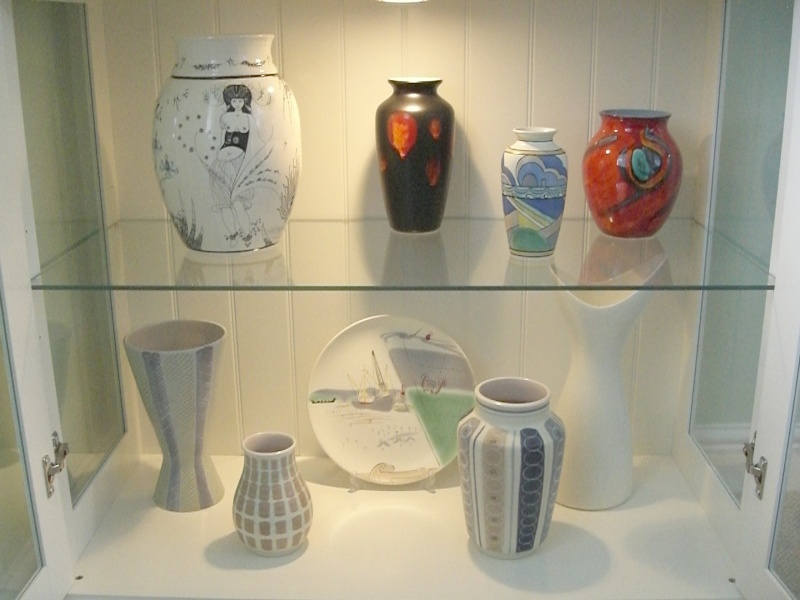 It's an Ann Read design called "Poole Harbour". Her original versions had the name "Freya" painted on the ship.

I love the way certain styles followed on throughout the history of Poole pottery,Karen Brown must have been influenced by the Ann Reid designs
_________________
"Changing your mind when you know what’s happening and you don’t like it. That’s what democracy is all about"

Yes, you can almost see the heritage go through from that plate to the Old Harry Rocks vase above.

Local landmarks have featured repeatedly in Poole designs, it is one of their appealing points.

I've tried a number of methods to identify some Poole vases belonging to my mother-in-law. Dont know where they came from but I have been able to get the following information.
There are 5 vases each approx 65mm dia and 190mm tall, apparently they may be spill vases but as yet I cant confirm this, none of them have a shape mark on the base either.
1. The Design mark is /FX (bluebird). Paintress mark is apparently Marian Heath (looks like a birds foot) and the manufacturer stamp is Carter Stabler Adams Ltd Poole England. dating from 1925-1934

I haven't loaded any pics yet but if anybody can shed any light on theses vases it would be appreciated.

You seem to have pretty much all the info already. Poole made spill vases, there were quite a few varieties, shape numbers 206, 207, 564 and probably more. It is unusual for none of a collection of five not to have any shape numbers. 206 is about 8" so that could be what you have.

There is no paintress recorded with the mark you describe from the period of your vases. Pat Dightam is too late. Gladys Brown (1933 - 1938) used 2 chevrons with a line through which is similar, but it could just be an unrecorded paintress. There are quite a few.

Thanks for the replies, TBH wasnt expecting so much so quickly. Anyway Ive got some pics together so hopefully this will help out. Let me know if they arent clear enough

What do the letters E/ and D mean?

Yup, E is for elaborate. Poole classified their designs as elaborate (E), medium (M) or simple (S) for a while in the 1950's and these letters preceded the pattern code with a slash. Gwen Haskins, who was senior paintress, used her own mark of X though.

can anyone put a rought date & name of the designer or decorator for me please?