Davee - I would bet that this is real Waistel Cooper. I have a lamp base purchased at Porlock in about 1960 by my Mum & Dad. W described it as having been made in one of his "madder moments". There were lots of tall pots around with big saucer tops, my Mum was not impressed! But in a corner was this single lamp base slightly taller than yours looks, and with a female figure carrying a bowl of fruit on her head, on the front. On the back is a crescent moon motif and beneath it the Waistel signature - rather small, under glaze. Moon has two wavy lines just like the three in your middle photo. Similar lines make up skirt on figure - and in same colour combination as at centre of your large fish. We bought it, I think in an attempt to exit gracefully. Glaze slightly creamier than your example, but now crazed. Treasured momento of childhood holidays!

Thanks for that, I never doubted that it was a genuine piece. I have now sold it to a Waistel Cooper collector who was extremely pleased with the lamp.

It would be extremely good to see an image of Roger's lamp base, as there is nothing else in any of the literature, photograghic records that I know of or in Waistel's archive that he showed me when I visited him in the mid 1990s that is remotely like the lamp base that Davee has just sold.

Potters did and still do make things that are totally different from that which they are known for, as the Leach-like Alan Wallwork vase that I posted on another thread some while ago demonstrates. Therefore an image of Roger's lamp base, which has a provenance, would be a useful reference for future unusual work by Waistel that might appear.
_________________
Now you should know by now that Potty and I need to see your bottom - we're funny that way!

Here are some images - lamp base is 17cm tall and 13cm diameter.

I'm trying to remember which year we bought it. Must have been 1960 or earlier, and from a big house at the east end of Porlock. Earliest it could have been was 1956.

That's brilliant Roger. I think that the big house you mention would have been his parents house where he lived and worked until he married. His first wife lived in Culbone Lodge, Culbone being a small hamlet 3 miles from Porlock, and he moved in and set up his studio there in 1957. It is possible that he might have continued to sell from his parents. I think I might be able to find an image of Culbone Lodge and post it to see if it rings any bells.
_________________
Now you should know by now that Potty and I need to see your bottom - we're funny that way! 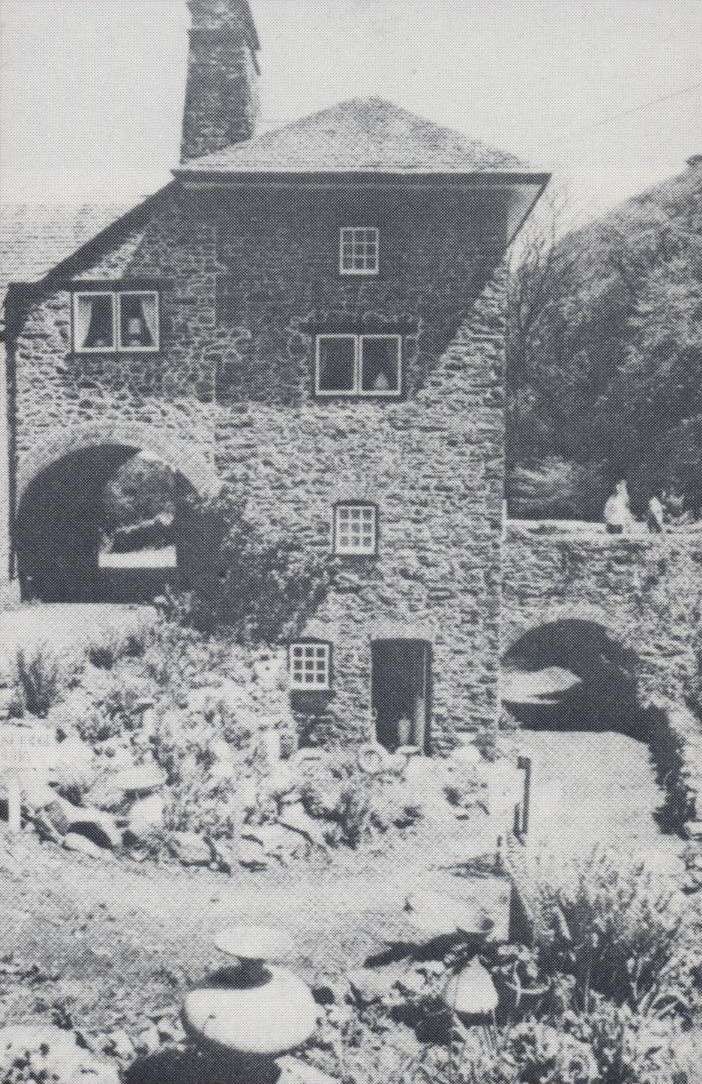 Yes, I remember Culbone Lodge too. We visited but didn't buy anything - it would be a long way back to carry a large pot and we had no car. Only other inhabitant of the village was a Mrs Cook who served up very strong tea tasting of antiseptic. Poor lady mourned for her son, killed in the war. We seemed to spend every summer holiday in Minehead/Porlock when I was young so it's difficult to remeber which year was which, up until 1961 when my father died. That year we bought a tea set from a shop in Porlock, so clearly didn't buy the lamp that year!

Here's my Waistel Cooper - found on the bay last year, small chip to rim, hence I could afford it. 11.3cm (height) 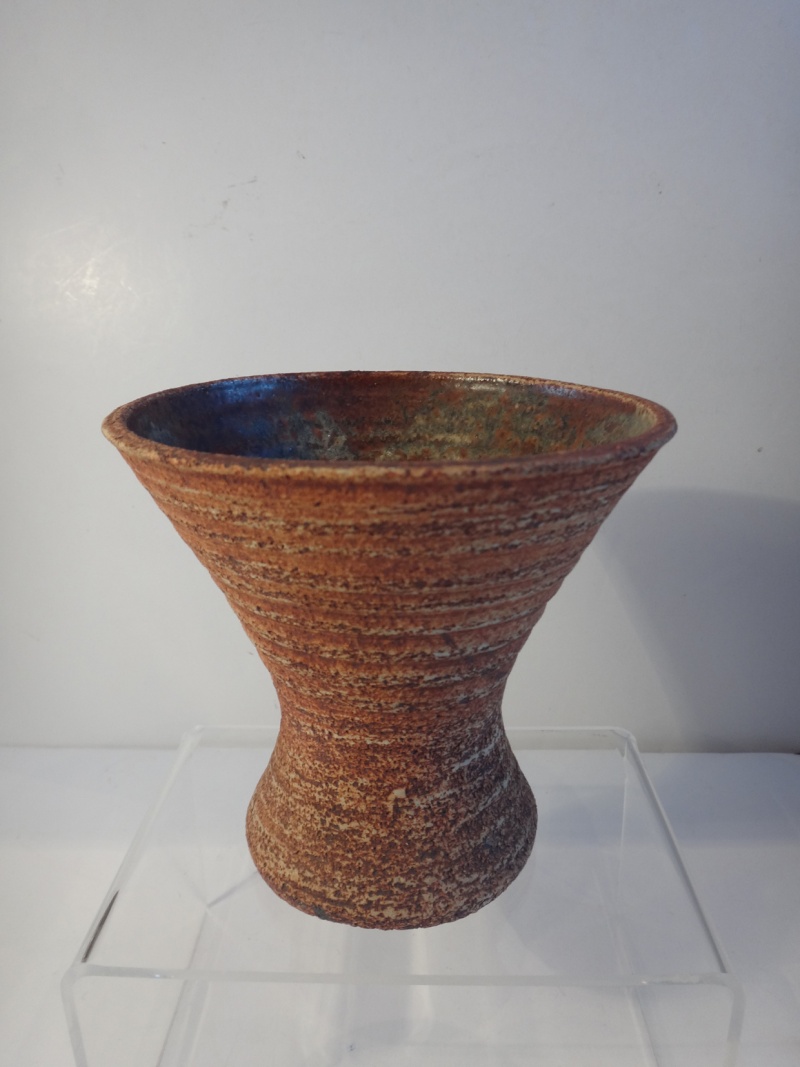 And it has that nice dry, wiped surface I've seen on his work

See you don't even need me.

He tended to put just a stylised W on smaller items where his full Christian name wouldn't fit but your jug seems larger than most things I have seen marked in that way. I suppose in this case it was best not to try a full signature in case it ended up as Waist.
_________________
Now you should know by now that Potty and I need to see your bottom - we're funny that way!

skipposal wrote:And it has that nice dry, wiped surface I've seen on his work

I suppose in this case it was best not to try a full signature in case it ended up as Waist.

It's 6" high, so possibly enough room, but maybe he was having an off day and couldn't be bothered. 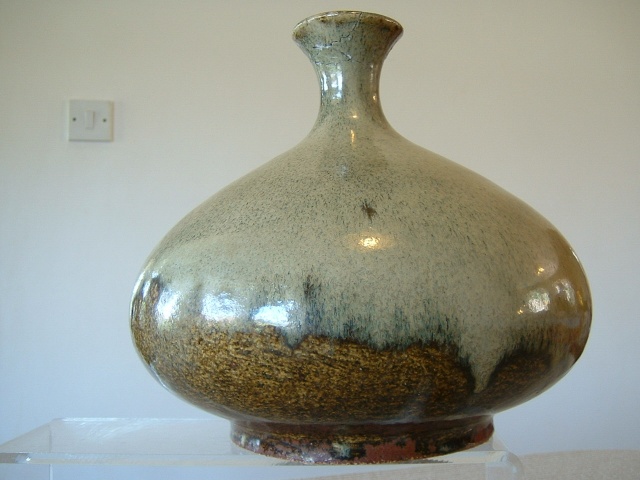 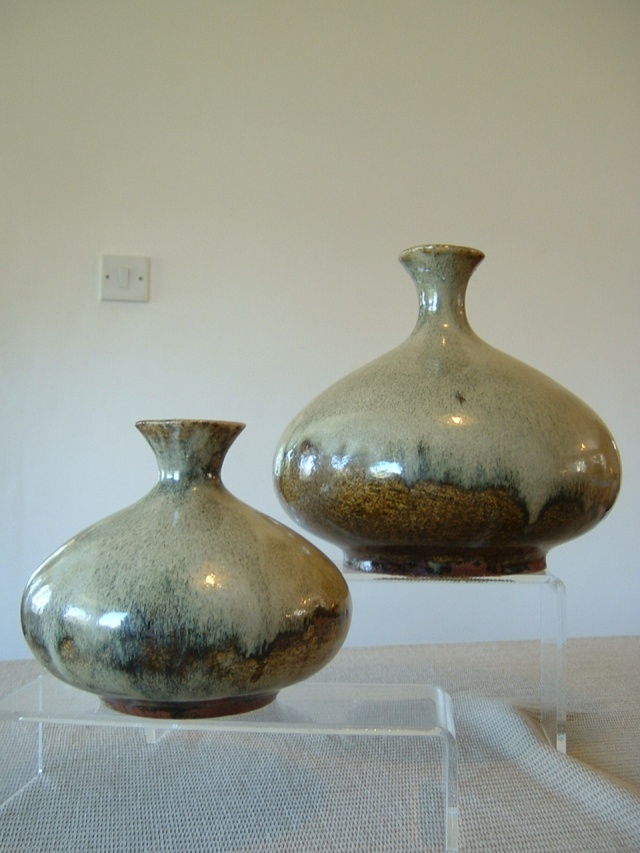 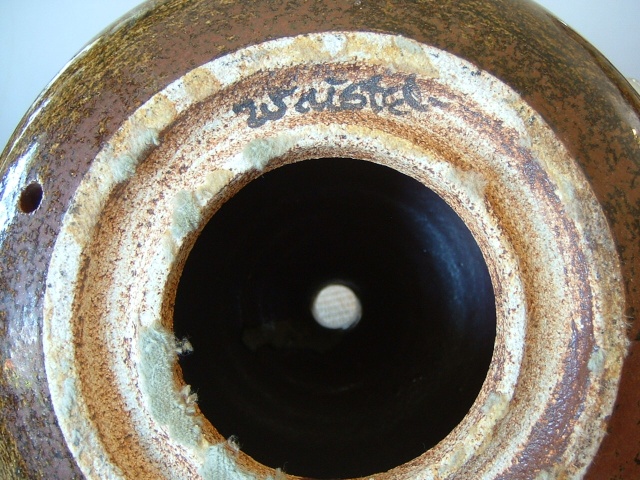 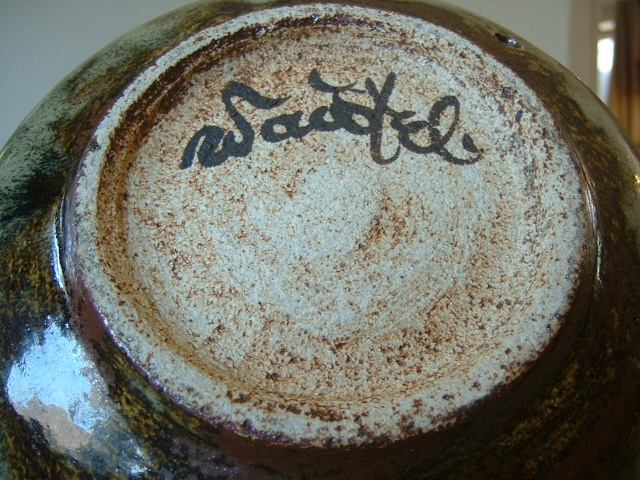 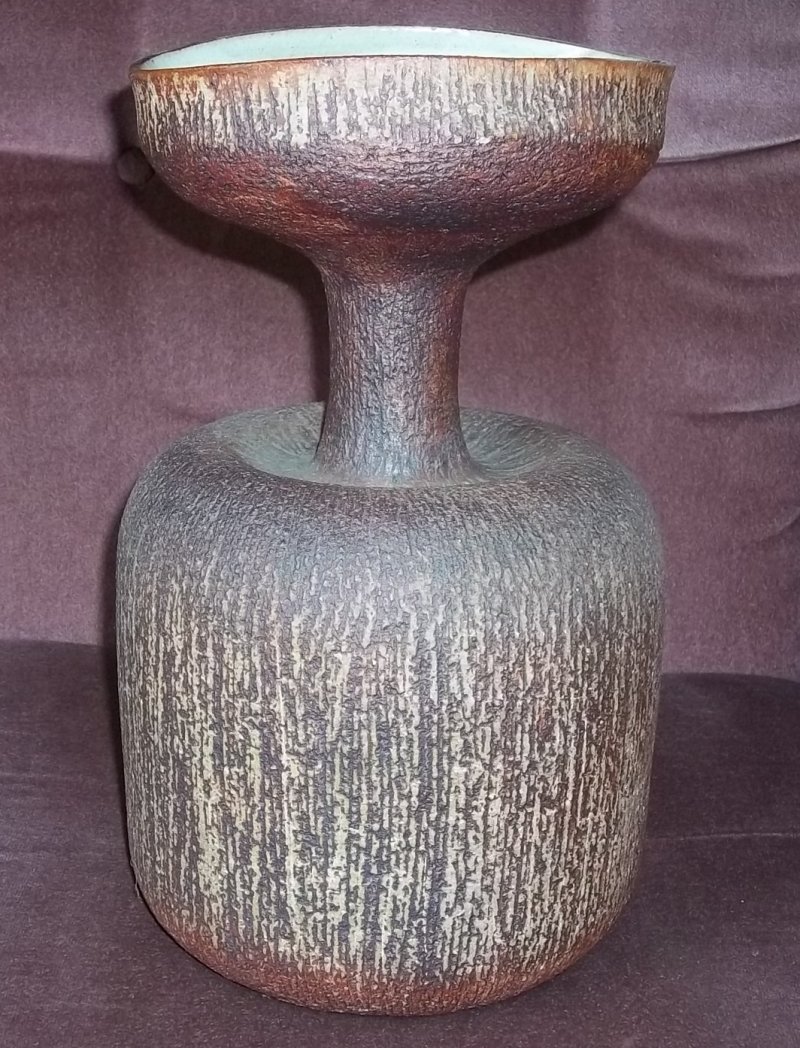 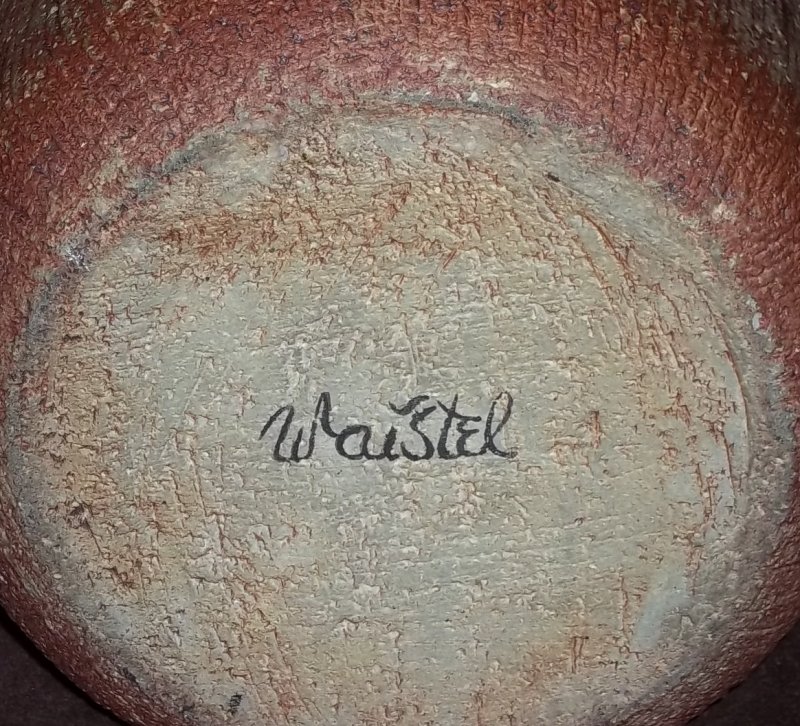 Is the base Completely flat ?

Yes pretty well. no foot-rim if that's what you mean. 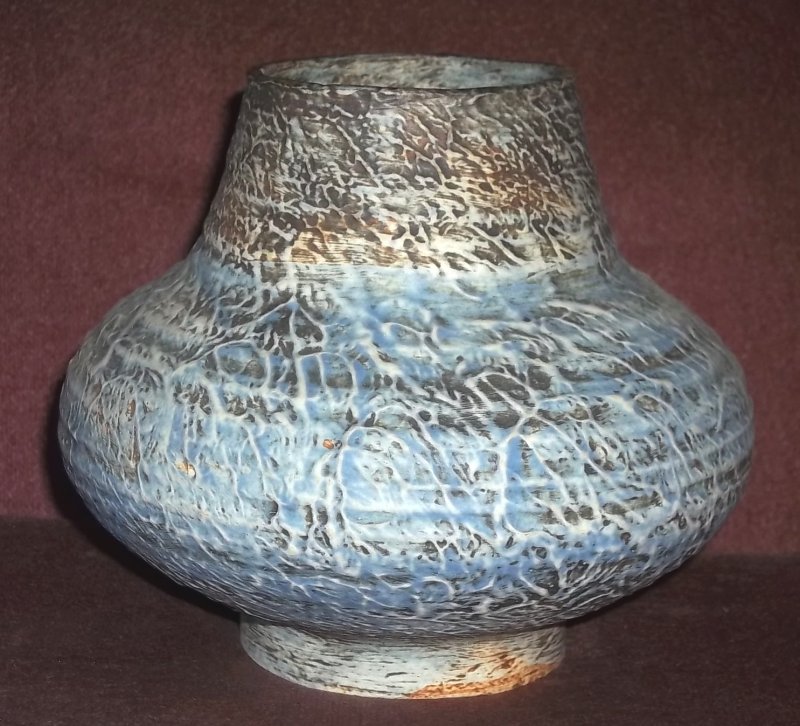 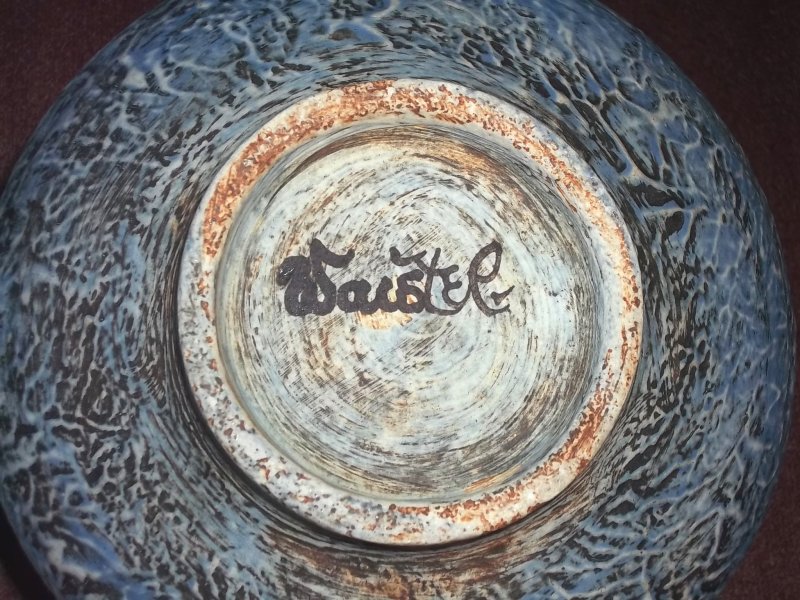 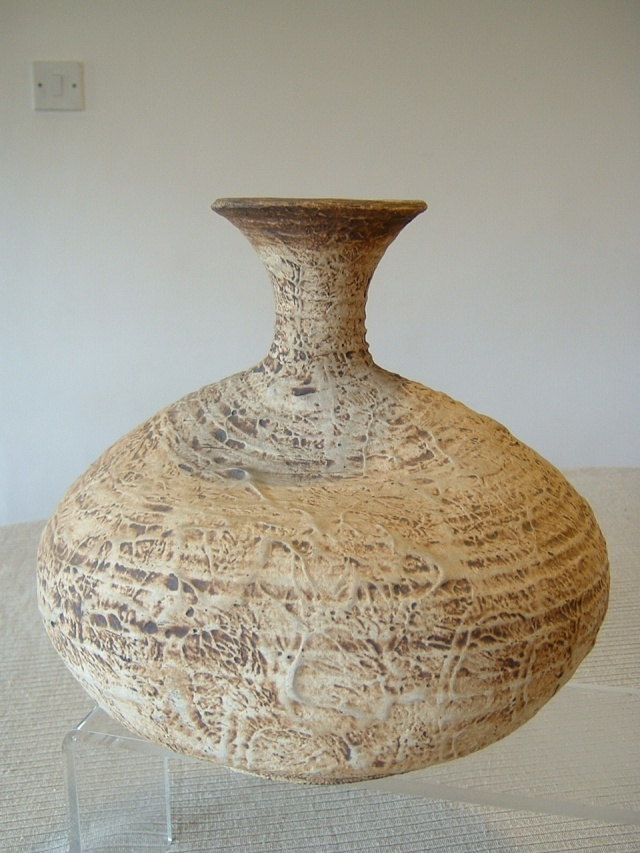 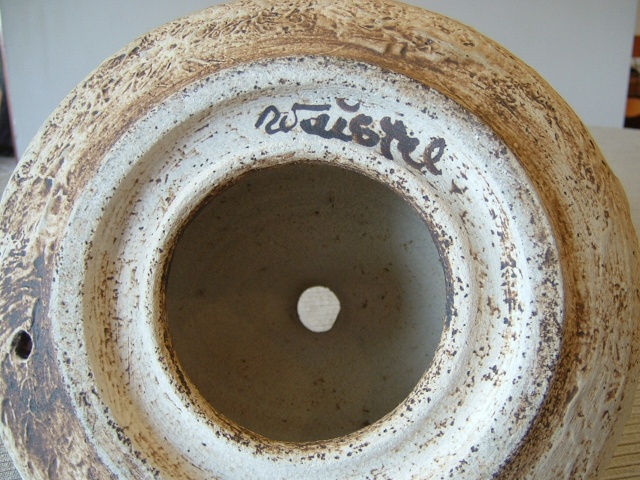