Had this one a while, bought in Germany, and have never been able to decipher the signature. It came with a few other prints from listed artists, dated from the early 1960s through to the very early 1970s.

Originally I thought it was a warty-looking prostitute hanging about under a streetlamp, but it was later suggested that it might be a representation of the eponymous main character of the German song, Lili Marleen / Marlène - although the figure looks quite run-down to be the subject of the classic lovesong, but possibly it is a play on the imagery.

it looks very pixilated,is that down to sizing?
_________________
"Changing your mind when you know what’s happening and you don’t like it. That’s what democracy is all about"

That was the image host grumbling over the large size - I've shrunk it down a little and it seems to display okay now.

Quick,pixilate it again Nic,it reminds me of the street that I took on the way to work when I was in my 20's,all the worst looking hookers would still be up and looking for business
_________________
"Changing your mind when you know what’s happening and you don’t like it. That’s what democracy is all about"

don't think it has any to do with the song Lili Marlen. The signature reads something like S. Ra(t)hstein or Ratenstein 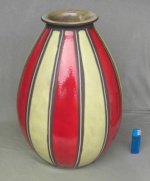