It should say "REGD TRADE MARK". 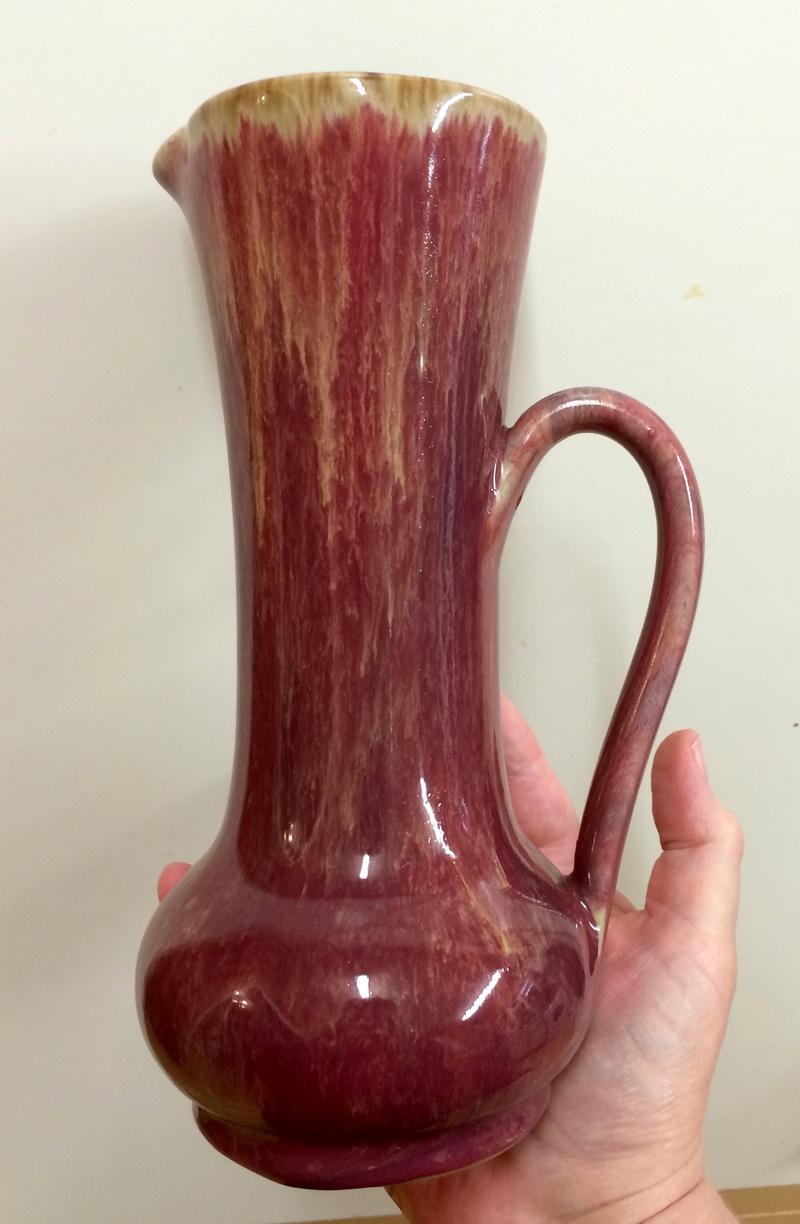 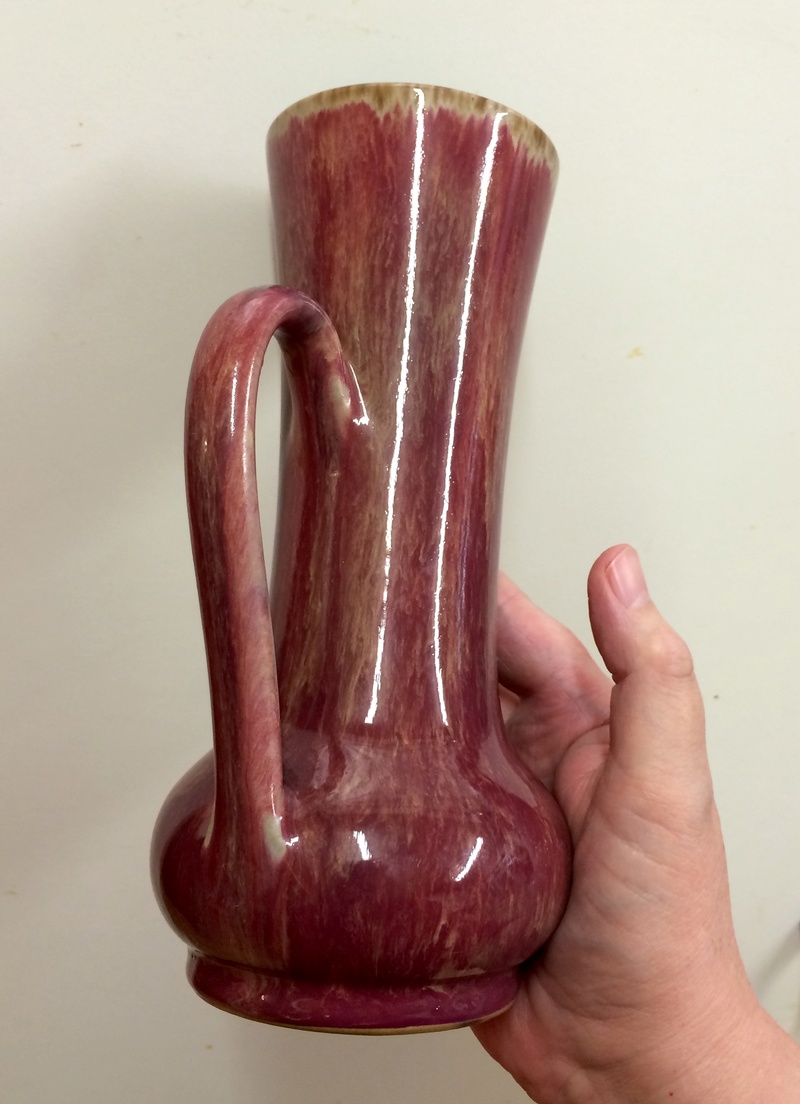 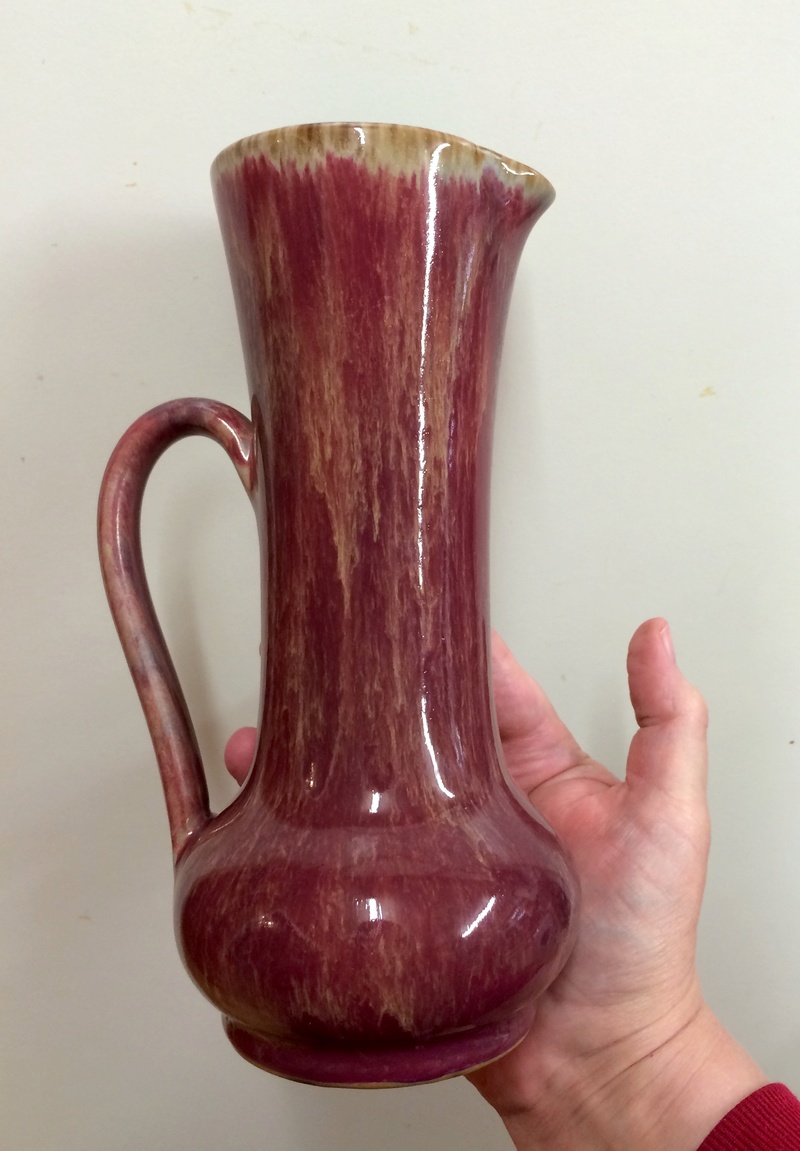 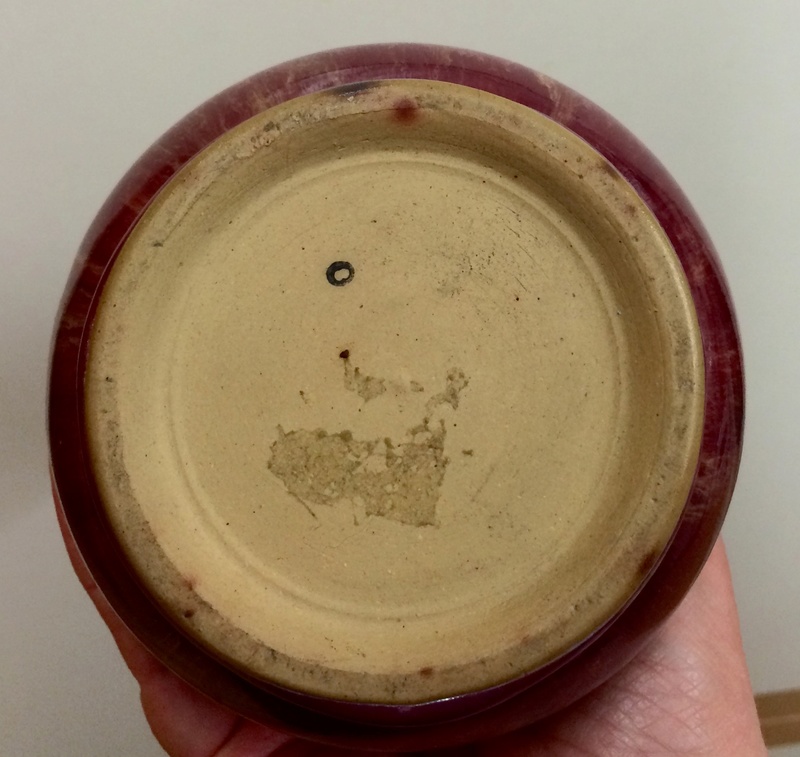 Not quite a Denby shape or glaze that I know. Without actually handling it,
I would be leaning more towards Langley.

No turners mark on the base, and finer turning points to Langley.
Langley did these flown glazes also.

To be quite honest, it could be a one off/trial by either.

I think we've had one of these before, which was suggested as Martin Bros.
Large vase with carved and glazed leaves on a red clay body.
Unmarked except for a partial label : ...GLEY ART POTTERY
Possibly Foley or Hadley or Torquay Ware? Sold via a Victorian Art Society subscription? 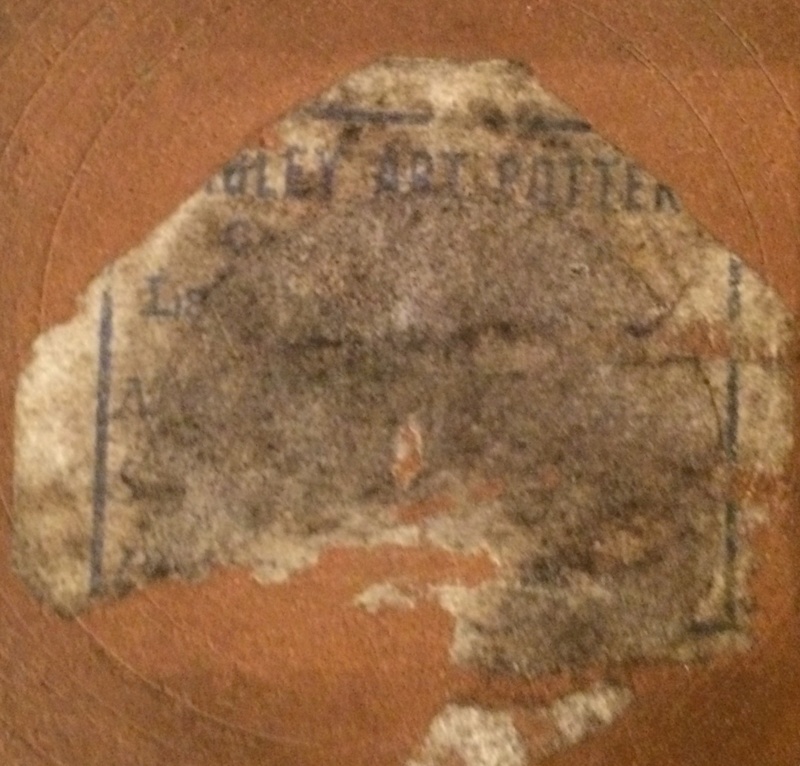 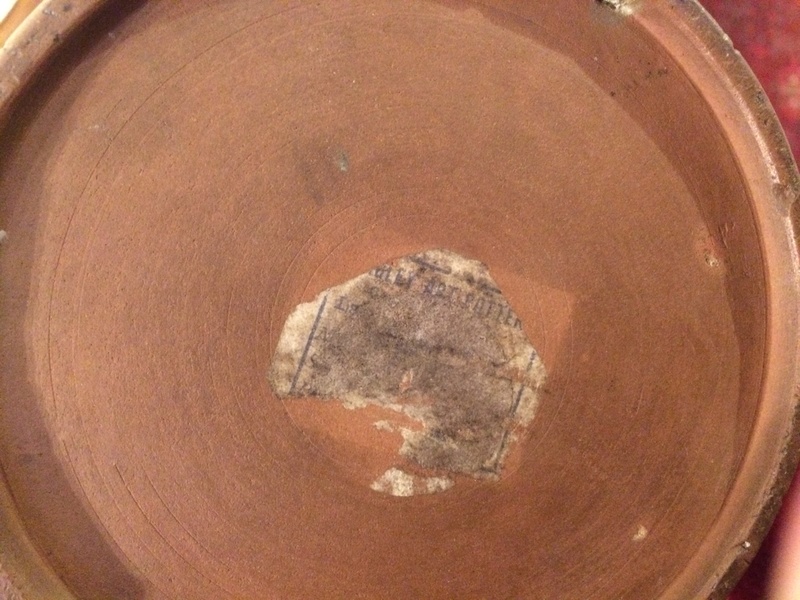 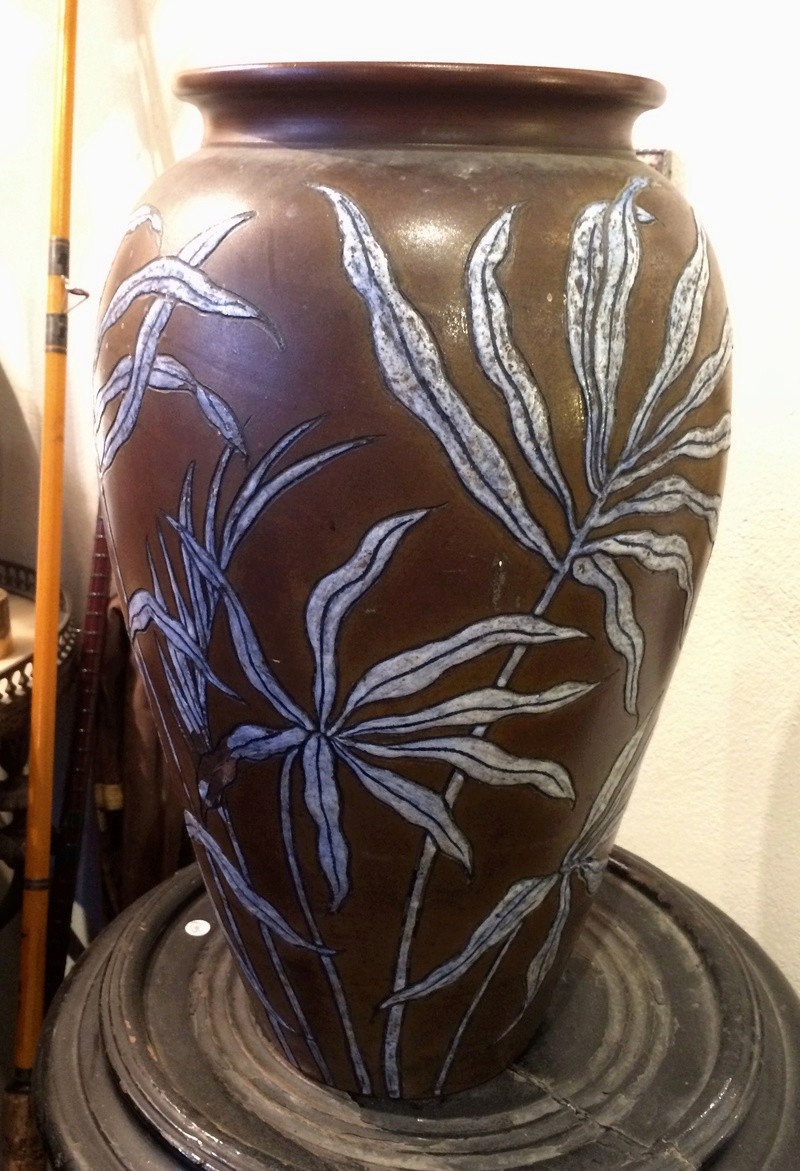 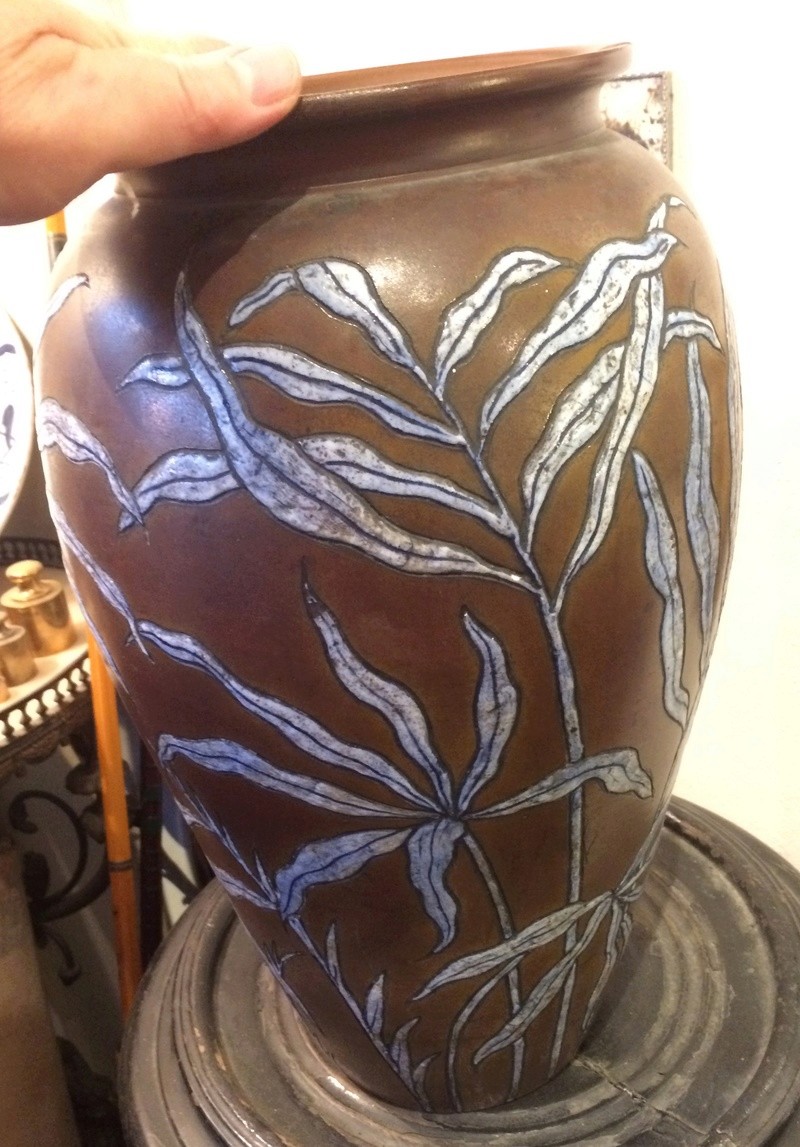 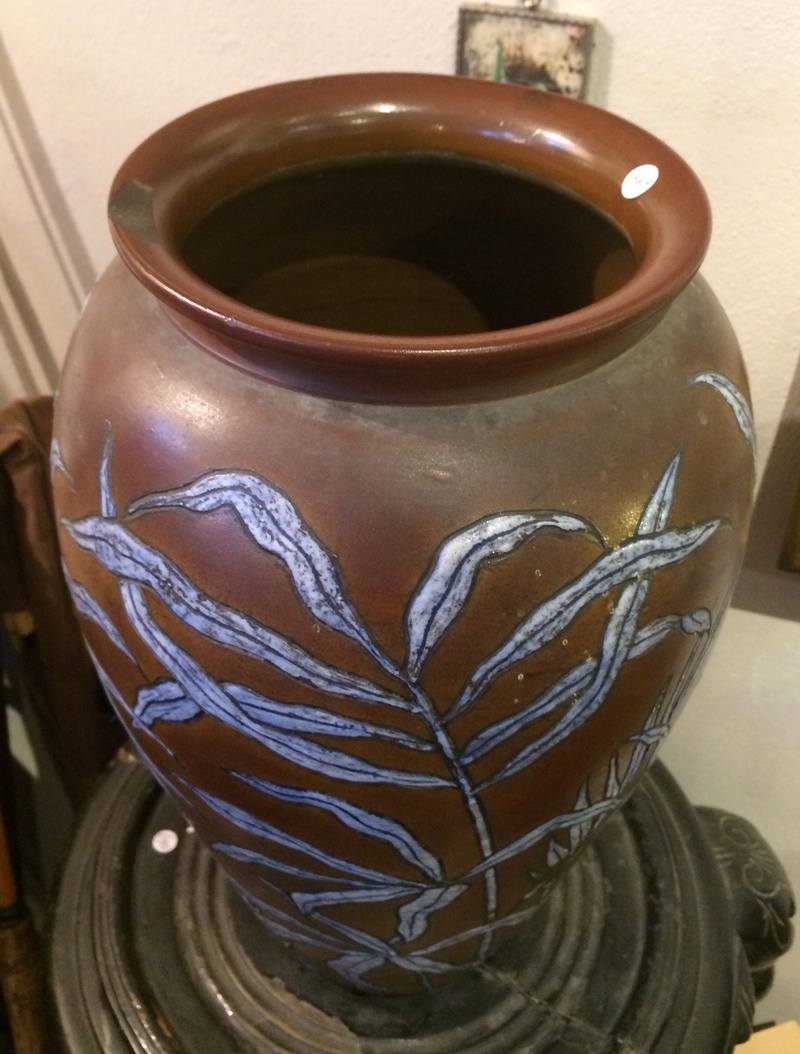 I have seen similar colours and leaf design on Martin Bros pottery
_________________
"Changing your mind when you know what’s happening and you don’t like it. That’s what democracy is all about"

Its style plants it firmly in the late 1870s to early 1880's. It's not Martin brothers, everything they made was signed and sold even if half destroyed in the firing.

I'm certain it's competition piece by a gifted amateur, solo potter or a small producer. These labels crop up a lot on ceramic chargers from the period, its rare on a vase probably due to the cleaning a vase would get compared to a wall hanging.

You could have other things on it but that lay out was standard. They slapped a label so when people visited they could read up on what it was and how it was rated and sometimes buy it.  Back then gifted artists could work in a studio like Minton's Kensington gore and have items sent off to be fired. The lines between amateur and professional got blurred.

It's Langley Mill.
This is the earliest art pottery, (as opposed to utilitarian wares),
they made c1880, with the remains of a very rare paper label.
The range had no name so collectors simply call it "Blue and brown".

They were never marked at all, and the range was only confirmed as Langley, when
some shards were found during excavation of the pottery site in 1992.
Maybe they all had paper labels... interesting.

My large vase with hops. 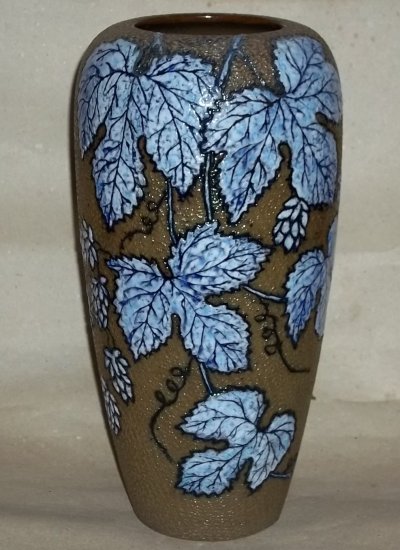 Checking in the book, this specific paper label design is unrecorded.
A pity it's not all there, and the writing is indistinct.

Looks like there was a square label headed Langley Art Pottery, and a circular label over the top; maybe a price label?
_________________
Just my personal opinion, take it or leave it.

Well certainly learned something. It is so similar to the competition labels I filled in the gaps. But an unrecorded label by a rare factory I would not have guessed. Think this is one for the reference books as I doubt we will see many more examples.

Interesting and lovely - Label looks like it was scrubbed of ...recently?......

...bet you hoped it was Martin Bro? ...Christmas come late!

22 Crawford St. wrote:Interesting and lovely - Label looks like it was scrubbed of ...recently?......

...bet you hoped it was Martin Bro? ...Christmas come late!

I think the value is closer to a Martin brothers version than most would suspect. I guess this is top of the tree for Langley collectors so would command a high price. If it was Martin the design would put it bottom end. But of course Martin brothers do have very high prices to start with:shock:

There are collectors for this range, but the slightly later work, late 1880s to around 1900,
with the bright colours, hand painted scenes and gilding, by known decorators, are the
top pieces.

A vase by George Leighton-Parkinson. 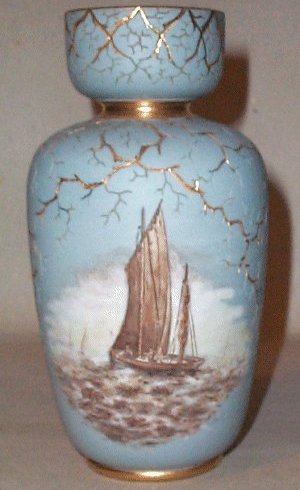 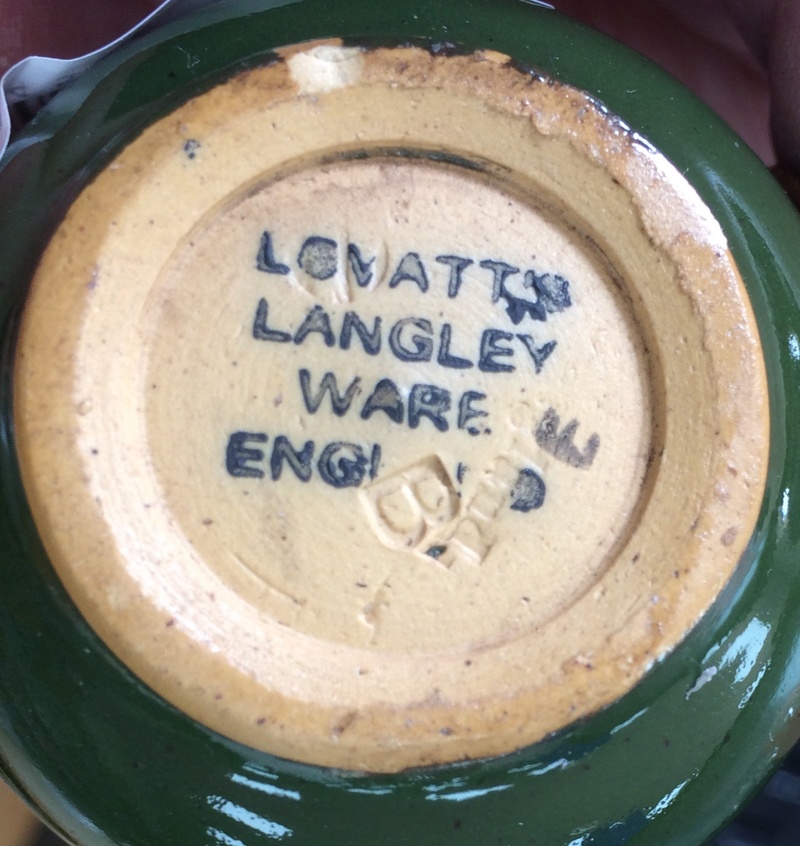 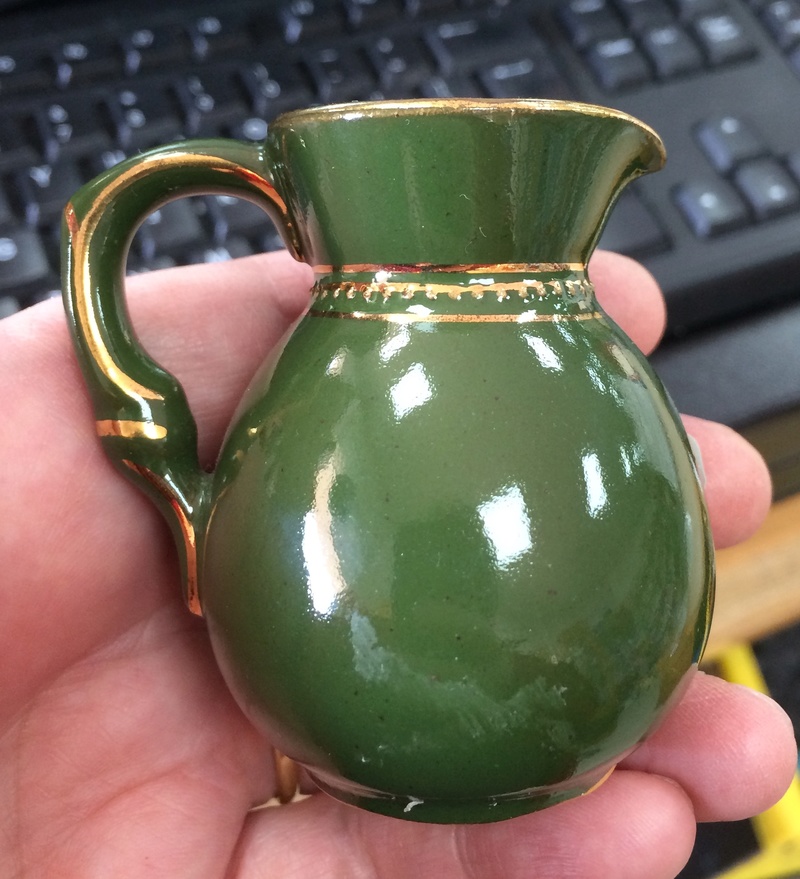 A standard cream jug shape from around 1900-1910.
Not seen one in that glaze with the gilding though.

Gilding was an optional extra, on order, with a comensurate price difference.