Much in the way of cased glass from many different factories is often mis-attributed to Kastrup-Holmegaard as part of the 'Carnaby' series designed by Per Lütken and Christer Holmgren in 1968. Most often these cased glass pieces hail from Germany, produced by three factories; Hirschberg, Taube and Friedrich. There are some examples from Scandinavian factories such as Alsterfors and Elme, and Italian factories in the Empoli region.

In fact Holmegaard, compared to the glassworks mentioned above, produced very little in the way of cased glass in solid colours, but because it is the most famous of the factories it has become a handy hook for lazy or dishonest sellers to hang their cased glass hats upon.

This article aims to clearly define the 'Carnaby' series and any known variations and similar items produced by Kastrup-Holmegaard in this period.

There are only sixteen different forms in the 'Carnaby' series, produced in five different colour combinations. The forms are all illustrated below:

As with any glassworks, there are always occasional items that deviate from standard production models, whether as a glassmaker's frigger, a special order, an exhibition piece, or a display model. Glassworks, especially Holmegaard, often produced non-standard pieces for sale to visitors through their factory shops. The following items are uncatalogued and do not feature in the 'Carnaby' range proper, but follow the same palette and style.

Photographs of the catalogued 'Carnaby' series.

Please note that none of the shape-associated names applied to the vases, such as 'ball vase' or 'bulge vase', are official titles - they're just informal names commonly given to the designs by collectors. 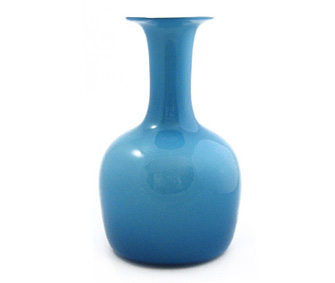 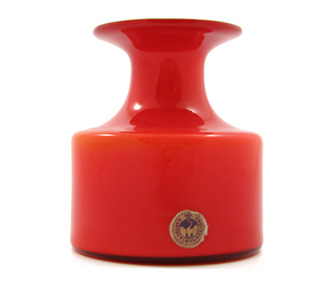 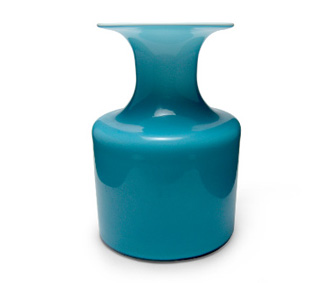 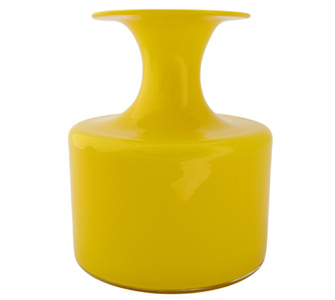 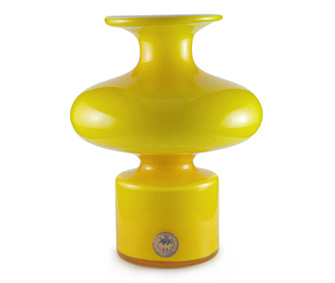 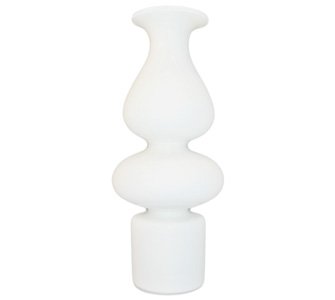 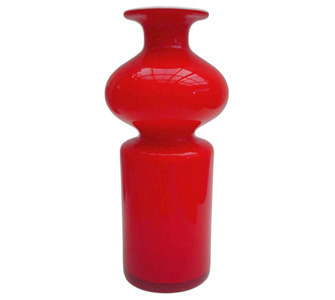 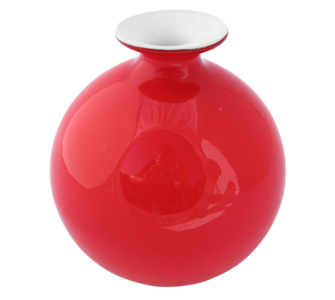 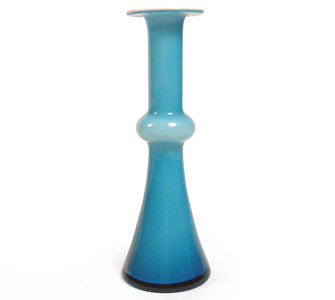 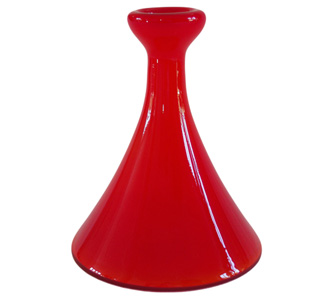 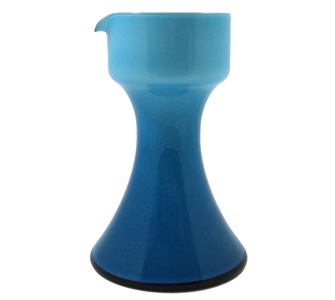 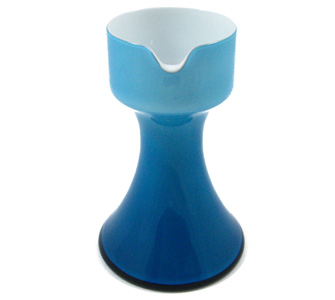 This is a great resource and great to look at too! Would you agree that there are also some variations in colour? I have two items - a small gulvvase and one of the "candlestick" vases - from this series in two different shades of coral red..one close to orange and the other a deeper red.

I've always been curious about that colour variation too.

It could be down to the vases being made from the end of a batch of glass - I was told that last bit of batch, because of how it was mechanically distributed about the factory, was always quite weak and apparently refered to by the Holmegaard glassworkers as 'shitty glass'. Certainly there was a lot of colour variation in the blue, ranging from quite a vibrant sky-blue to a very pale powder blue.

This is a huge help...........great information. I just received a red bulge/opal carnaby vase without the label and have been concerned if it was authentic.

Hi dabeachiegirls, glad you found this site, was going to recommend you visiting here(re: your ebay message).

Oh, and fantastic guide Nic, I do hope more people see this, I threw something similar together on ebay(well, I was restricted with what I could do so I just set up links to certain websites). but it was at a time when everybody called all that kind of cased glass as being made by Holmegaard and that just annoyed me to say the least lol

I notice some sites around the net attribute the range to Michael Bang. Is this disputed or are they just wrong? I am a confused beginner!

They're just wrong - the original catalogues state very clearly that they're all by Lütken (barring the one design by Christer Holmgren).

Michael Bang created the 'Palet' series, which used some of the same colours - but this was an extensive series of kitchenware - and it's this that causes the confusion, I think.

That, and a lot of dealers don't really care that much who/what they attribute their stuff to if they're too lazy, or if it helps their margins. A very well-respected dealer of Scandinavian design here in the UK had a load of Palet glass described as Carnaby, and I informed him of this - he replied that he already knew, but it sold better when he called it Carnaby.

Thanks very, very much for clarifying - especially since (at the risk of sounding a little eccentric here) I have been swotting up on Holmegaard to the extent that I dreamt about Per Lutken on Friday night then went to my local fete on Saturday morning and found a blue/opal ball vase for $2.50. A much more poetic result than if it had been designed by Bang

I see a lot of round stoppers on Carnaby range items in pictures on the net. Are these an official part of the range?

I believe, in some instances, there were stoppered examples, where the ball-shaped stoppers had shafts to hold them in the vases - but these seem to be very rare. The book Dansk Glas 1925-1985 shows an example of a tall Carnaby vase in transparent ruby-red glass with such a stopper.

For the most part, the 'stoppers' on those for sale are just Holmegaard hanging balls (like Christmas tree baubles) placed on top, with the loop for threading the string hidden inside the vase. So, no, not officially part of the series... although I'm lead to believe that some canny 1970s retailers originally sold them in this way when new (presumably to keep the sale of baubles going all year round).

Aha! Thanks very much again and also for this fantastically helpful identification guide.

Have the pictures in the guide disappeared?

Oh, they were stored on my old server - drat. I don't have them on this computer - will have to excavate my old hard drive and restore them at some point.