Hi Ade
I know for an absolute fact that Ken Law the artist and Ken Law the cellist are indeed one and the same person. Back in the mid 50's Ken would stay at our house in Gloucester when the Three Choirs Festival was running, he, my mother and a few others from the LSO would play music 'til the wee hours of the morning. I also have in my possession 2 or three of his watercolours that he gave to my mother.

As promised a few photos. I will try to improve on them when I have more time. One of my 3 paintings is amongst the missing and is probably in one of the nursing homes that my mother was in. I hope they enjoy it.

It certainly does , I think Ken Law has had more publicity here than anywhere else .

well maybe there are more Ken laws than first thought

A lovely lady at my local art gallery was able to give this information:

"Unfortunately I have only found one mention of an artist with a similar name. There is not much to go on but here it is:

In the book that lists the exhibitors at London's Royal Academy between 1905 and 1970 there's an entry:

This means that Oldham Landscape was the work exhibited in 1969 and the number next to it was the number it had in the exhibition. The address given is where the artist was living at the time.

I have also searched the two multi-volume sets: Benezit: Dictionary of Artists and Artists in Britain since 1945

Neither these nor the auction database we subscribe to mentions this artist. "

Hi
I am so pleased to have found this thread :-)
My mothers oldest sister was the second wife of Ken Law's father, Leslie. I always thought Ken played for the London Philharmonic Orchestra but was only a youngster so am not sure. I do know that one of his pictures was used on the cover of a program once.
I have two of his pictures, one signed and the other not. I will read through and try to post them.
They were a very talented family, Leslie himself was on the stage and made at least one 78 record, and I seem to remember one of Leslie's grandsons was quite an accomplished artist at a very young age.
Julie 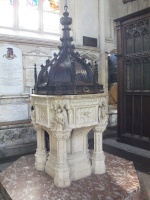 Re; KEN LAW. I HAVE AN ORIGINAL KEN LAW GESSO OF FLORENCE. I BOUGHT IT AT A CHARITY AUCTION ABOUT 30 YEARS AGO AT THE ROYAL FREE HOSPITAL HAMPSTEAD WHERE KEN HAD BEEN A PATIENT. THE ACTUAL PAINTING IS FRAMED AND ABOUT 4FT LONG. I KNEW HIS WIDOW AS A CUSTOMER OF MY DELICATESSEN SHOP IN HAMPSTEAD AND ALTHOUGH SHE WAS KEEN TO POINT OUT THAT THE ACTUAL COPYRIGHT BELONGED TO HIS ESTATE, MEANING THAT I COULDN'T SELL PRINTS ON TO PUBLISHERS, NO DOUBT I COULD PASS ON PHOTOS TO ANYONE INTERESTED TO LOOK AT THIS BEAUTIFULL WORK. 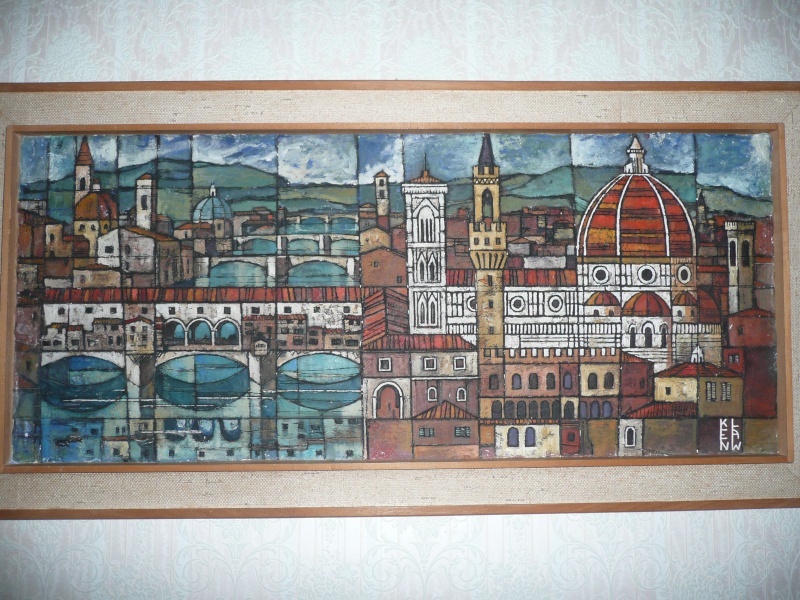 Yes, it is a hessian section which I really dislike; in my opinion it does nothing to enhance the lovely painting and it looks scruffy. I mentioned this to Kens' widow and told her that I would like to change it. She had different ideas saying that it was Kens' choice and that she thought that it was better left alone.

I know what you mean John but I sort of agree with leaving it as is. The frame is in keeping with the period imo, it looks right.

I also agree that "it looks right" :D

It does not take away from the painting at all and a frame that I would be more inclined to use may wash out the colours used in the painting.

Thanks Skay and Potty for your kind remarks. Yes, the hessian stays. It was Kens' taste. I might consider getting it cleaned or re-furbed at some stage.

Wow, so nice to see some of the original pieces up on here now and not only the prints. Thank you to everyone who has taken the time to load up images. I can see a retrospective any time now.
Quite confused on the watercolours, there was one on ebay a couple of months back also of Hampstead, I presume he must have lived around that way at some time? I do think they may be his though, as the styles have similarities.
In the meantime, I'm working on a few paintings in homage to the great man. Will post up if/when I'm happy with them! 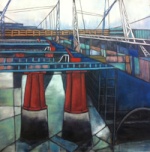 keep those retro frames that is what authenticates the pieces

He is a great modern painter and deserves a show

Hello everyone and greetings from a very wintery Melbourne
i'm so glad that positive information on the Artist Ken Law has been posted at last by his son John, and new photos uploaded , would'nt it be wonderful now if something could be published on this iconic 60's painter
Putting him firmly in the space he deserves in British Art History, or even a dedicated website depicting as much as possible. I look forward to seeing more. A big thanks to all .

Well all i can say is WOW!
My interest in Ken came about as a result of finding a print in a charity shop and i asked the question on the forum 'has anyone heard of an artist called ken Law' and look where we are now! Lots of information about a fabulous artist, pics galore and what pics they are! Again WOW!
Im glad that we've managed to lift the profile of a clearly great painter, thanks to everyone.........keep them coming!

Hello
and thank you.
I bought the Hampstead print about 20 years ago
from my local library and have spent many an hour
scouring the internet for information on Ken Law.
I had come to the conclusion that he was now a
tattoo artist in the States. How wrong was I!!
The last time i checked this forum was over two years ago
but logging on tonight/this morning I couldnt believe my luck.
Not only finding out exactly who was Ken Law but seeing
such other magnificent examples of his work as well has quite
astounded me.
My board print was the last piece for sale when my local library
decided to stop lending pictures out so had been hung on many a living room wall
before mine and has had a few bashes and scrapes in its time but
I absolutely adore it and I am glad to hear so many other people
appreciate his work and that there is more out there.
Thanks to all for your posts, especially the Law family.
I hope anyone that has more photographs of his work will post them here
as i for one would love to see them. I am smiling from ear to ear.

I knew the artist Ken Law, he was my cousin Ken, my name is Michael Law and I would like to get in touch with my cousin John Law, Ken's son. The last time I saw Ken was many years ago when he appearing in an offshoot of the LSO at a Sunday concert with Vic Oliver, in Bexhill on Sea. I knew of his art work only through his and my Aunt Mimi Law.

This is the last we heard from John..........you could email him via this forum?

johnlaw1000 wrote:Yes I do have many examples of my fathers work, but I am away in Thailand for the winter, will be back in London end March, will post some pics then.

Are you back yet John?