Hi,
I've picked up lots of strange (aka "interesting" (-to me at least!))  objects over the years when I'm out-and-about - mostly at car-boots and charity shops - usually stuff that's been there quite a while - i.e  the stuff no-one else wants! - usually I can figure out (eventually!) what they are, but sometimes I'm left completely stumped.... 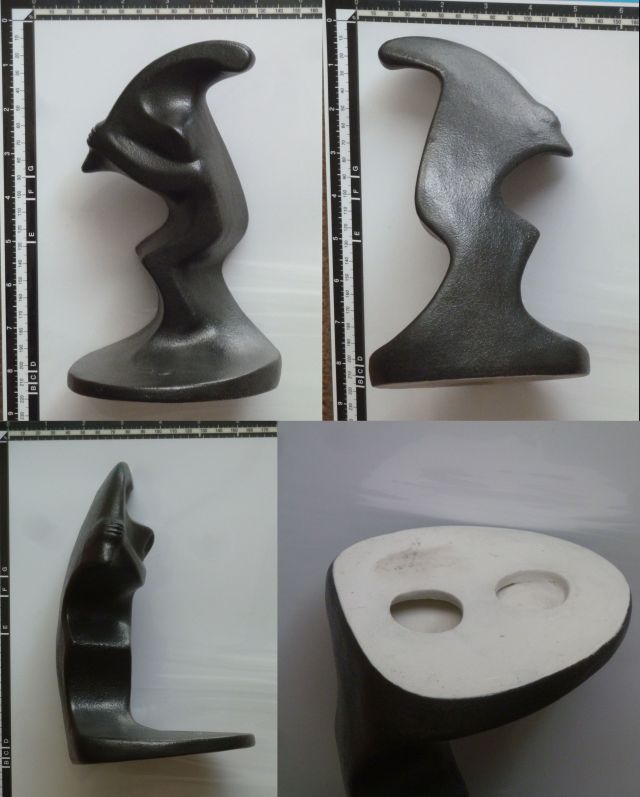 I've had this one for several years, and still can't figure out what it's supposed to be, and unfortunately there are no makers marks on it anywhere, except for an unreadable blurred/smudged faint inscription in pencil on the base.
It appears to be a figurine of a human-like creature (mythical/abstract/folklore?) with a swept-back pointed head (or a representation of a hat?) and pointed face, a crouched back and bent legs, with its left hand covering the position where I assume its eyes would be!.  There is a raised outline of an ear on the side of its head.
It measures approximately 8 inches in height, and is of a white ceramic material (porcelain?) under a matt-black glaze.
Given the fact that it obviously meant to be viewed from one side, I'm wondering whether it may be one of a pair?

To me in the top two photos. The one on the left looks vaguely like a human figure carrying something very heavy. The right hand vaguely looks as though they are hurling something away. A bit like a discus thrower poses. Could be a logical symbolism.

Many thanks for the suggestions....

- they make much more sense than my own interpretation!
-  no matter how many times I had examined it, it never occurred to me that it was a person holding a club of some sort until you pointed it out!
- just needed a fresh set of eyes to look at it...

I think I agree with NaomiM - looks very much like an ice-hockey player!

- would explain why there is a faint suggestion of a raised circular object near it's foot (highlighted in red below) which would obviously be the puck
- which I'd ignored! - thinking it was either a mould defect or pooled/dribbled glaze! 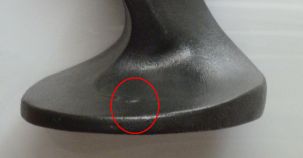 Some sort of Trophies perhaps? With sport being the most likely candidate. They are not necessarily a pair.