I don't think Dianne's work has appeared here yet so thought I'd post some photos. Her work has changed quite a lot since I first started collecting her and I think it's always interesting to see how a potter's work progresses over time. I wish more current makers would include archive photos on their websites like Alan Wallwork does!
I bought this piece when I first arrived in North Yorkshire in 1997. Dianne at that time had her studio in Pateley Bridge, North Yorkshire. Before this she worked out of a studio in Otley, West Yorkshire. 9.5cm (height)

By 2008 I had actually got to know Dianne, very talkative and friendly. By this date she had given up her studio in Pateley and had a purpose built garden studio in Riddlesden, West Yorkshire. I bought this next piece from her annual Open Studio sale in Riddlesden. As you can see, a quite different style and matt glaze. It was on sale because it was made some years previously, maybe early 2000s. 11.2cm (height)

Finally, this dry-glazed pedestal bowl with impressed fossils came from her 2009 Open Studio in Riddlesden and was her current work at the time. 7.5cm (height). She has taught ceramics in Bradford (I think) for many years but I believe she has now semi-retired.

This is a blue bottle vase by Dianne that I used to own a few years ago.

Cool - I've seen other pieces by her with that matt blue glaze. Is it barium? I'm guessing that's the same era as the green lidded pot I have

i'm afraid i don't know anything about how it was made or the materials. The blue was so intense, like an Yves Klein blue, with small slivers of coppery metalic bits in it.

I like the pedestal fossil Bowl Karen , so different from the other pieces shown .Ed

Yes, isn't it. Some of her newer work has gone very 1950s, lidded pots in monochrome dry glazes.

Just had a look at her slab built boxes online, that's more the kind of style I like , I think when some potters or artists change styles it's not always for the better , sometimes an outsider can see what the potter can't , a bit like when groups made an album and had to be told what was going to be the hit

Well, didn't even know she had a website! You so right about outsider view point. I think I have a good eye, but when it comes to my own work (recycled textile/constructed stuff) I find it almost impossible to tell what's good, have to leave it for several months and then I can 'see'

A deep blue matte glazed footed jar and lid, with what looks like a 'dc' mark under the lid. Around 7" total height. Looks like a modern piece to me. Thanks for any ideas you have out there. Thanks. 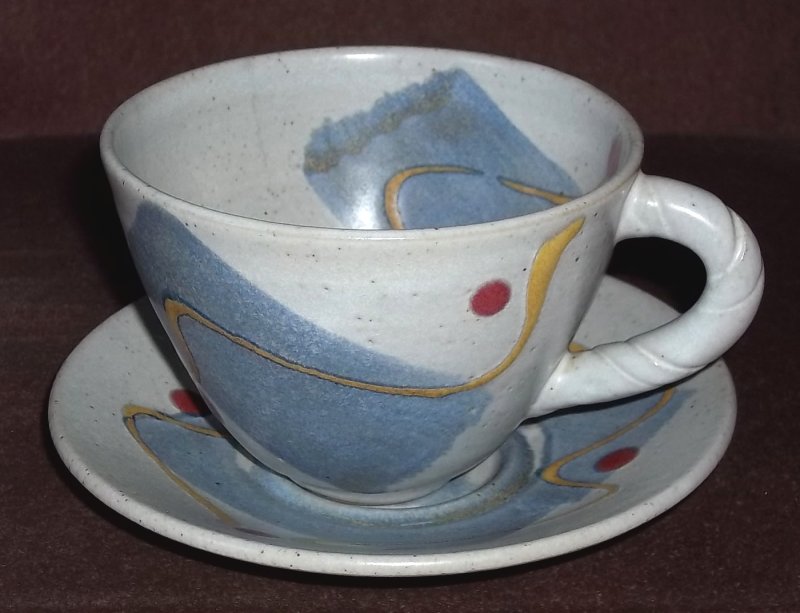 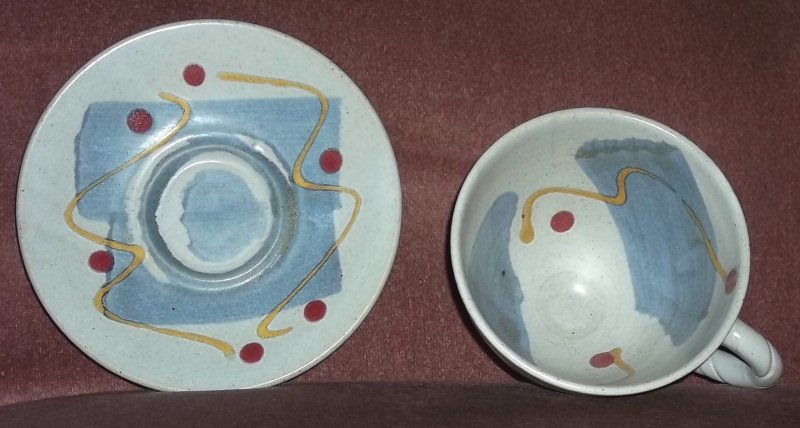 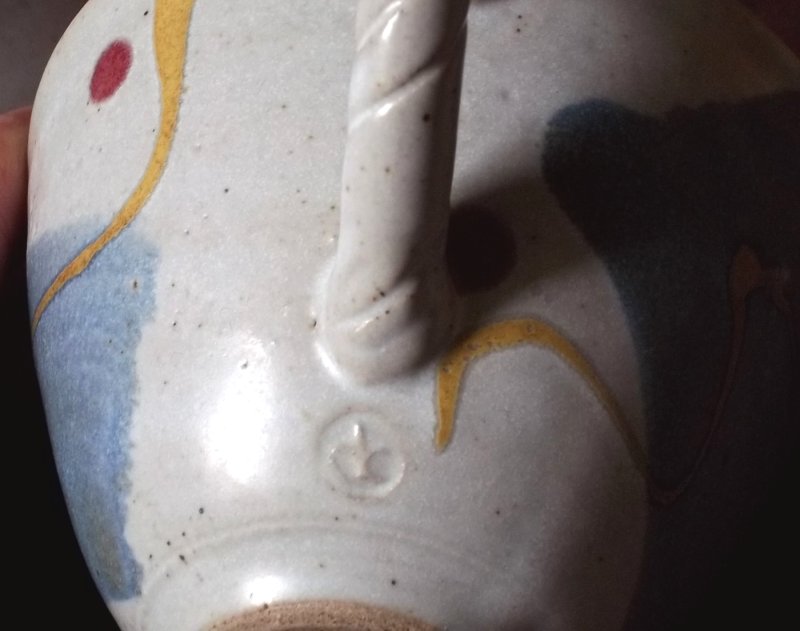 The cup seems too big for the saucer, but then the cup foot is too small for the
saucer well.
But only 1.95 in a charity today. 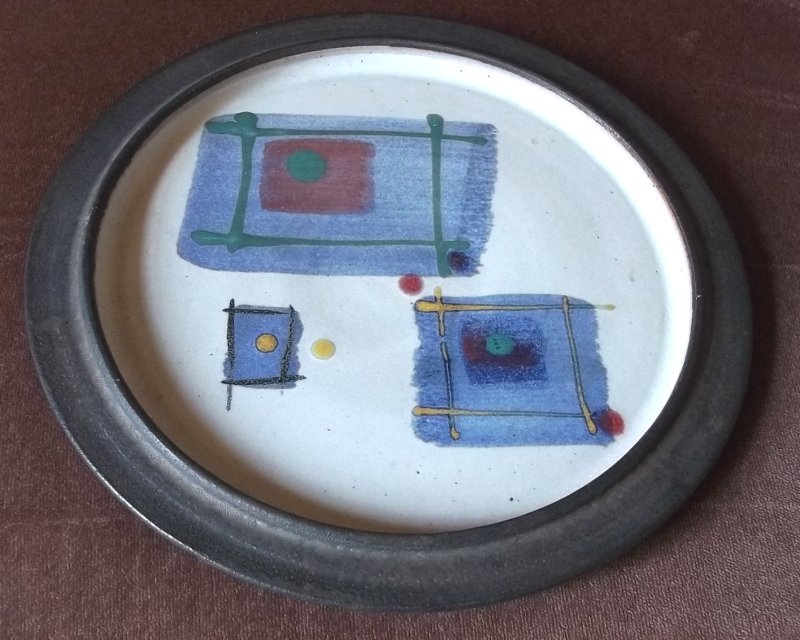 Studio mug for ID,  in the style of Janice Tchalenko,  but not by her.
Impressed mark which I'm reading as dc.
Any help welcomed. 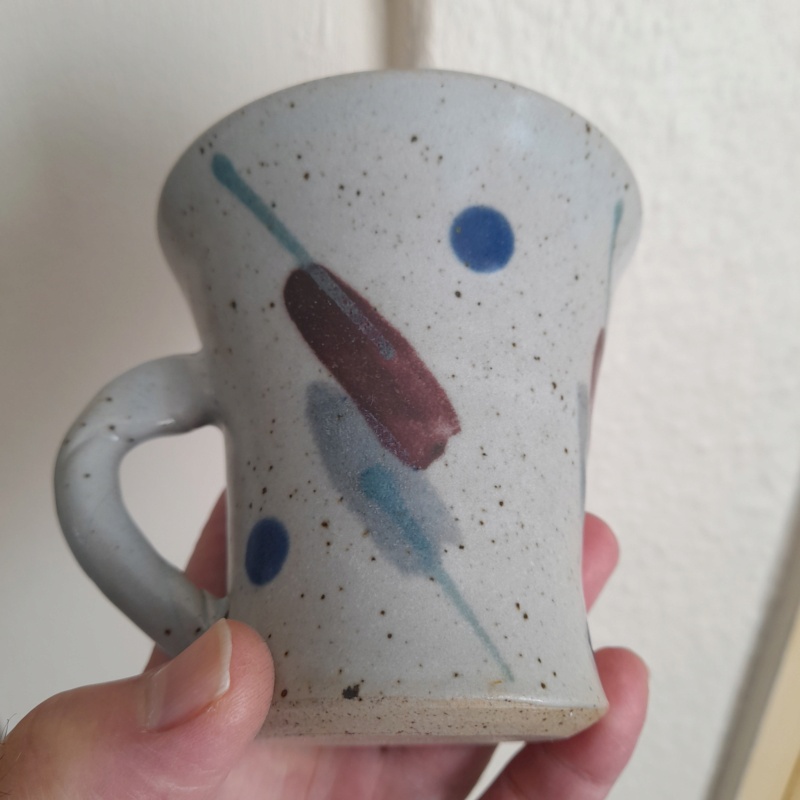 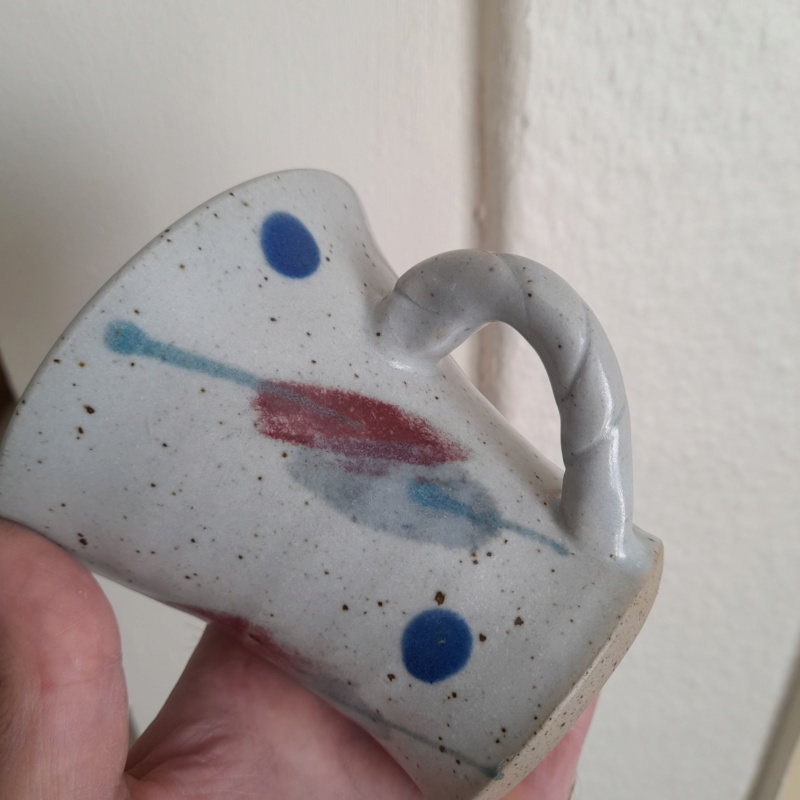 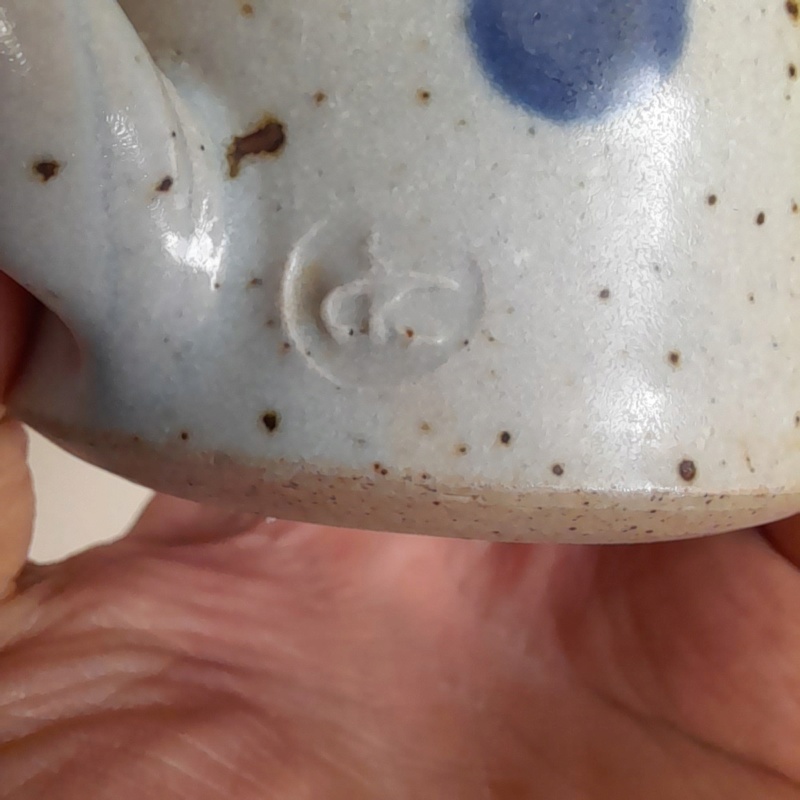 Thank you Naomi, very much appreciated, bless ya