ooh thanks Dan - I had another look back through the thread again, and then having seen the early piece with the Mousehole label I had another look at the set. One of the mugs has the remains of the ochre paper label. I can't see any signs of a Maggie signature but the decor looks as though it was done by her having seen her initials on the base of the piece posted earlier in the thread - tenuous link perhaps but ...
m

not tenuous in my opinion m, these pieces were certainly made by either Bill or Maggie (possibly both) but as far as I know there were no other people working with them at this stage
_________________
Making new friends as an adult is hard...because I don't want them.

I saw that piece a while ago looking for something else. It seems from this that Maggi and Ev designed the Folk range as well as Medallion and it also seems that there is another range called Celtic. Have I understood that correctly? If so, then does my black and white set fall under the Folk range and was it therefore designed by Maggi and Ev from 1968 or later?
m

or is it not 'Folk' range - I guess it must have come earlier than 1968 given the label link to the mug with the Mousehole pottery label. Therefore perhaps not at that time called Folk but possibly a precursor to what became the Folk range?

We visit the area quite a lot ,the village of mousehole and newlyn are very close as was the lamorna pottery , the newlyn pottery is now a cafe run by kath's nephew . 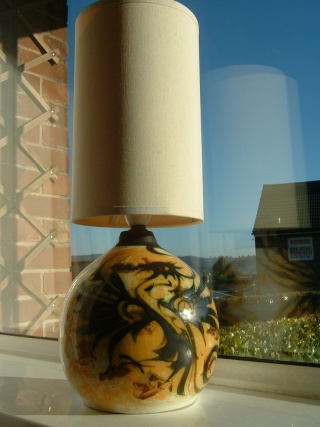 many thanks to Andrew, a kind ebay seller who donated these great pics of a rare 3 legged Mousehole bowl
_________________
Making new friends as an adult is hard...because I don't want them.

an early Celtic mug with monogram

They certainly did. I'll show some pic's of 'queen' and seahorses, but I've not yet managed to get any kings - but I do have an amazing 'aztec' style design!

I probably don't know any more about the time lines than you guy's & gals. Certainly that early link is a laod of Bull. It is basically a tribute to Eve, who had just died and not intended as a factual record of Celtic Pottery - read that and you'd think Bill never existed. Eve wasn't involved in the design of the Folk range (the wonderful heraldic images), this was Bill (and poss Maggi ?) when at Mousehole. It may have been when he joined Maggi and brought his 'Medalion' range with him that the term Folk was coined, but that is it.
However, it was interesting to read he'd been her companion for 42 years, this would put it at 1968.

I don't know how many painters they had over the years. Some were either better than others or there was a Monday morning and Friday afternoon style of painting. One who I know was with them for a while was Ian Box

The best site for info on Celtic Pottery is here http://www.studiopottery.com/cgi-bin/mp.cgi?item=10 with a load of pic's including different labels.

Although this site does have pic's (large enough to read) of the best magazine article I've seen on the pottery http://fired-specialists-of-carn-pottery.com/CELTIC-POTTERY-ARTICLE-BY-GRAHAM-GOWER-1998-PUBLICATION
But go back a page and see what you think of that horse/unicorn sculpture. I've seen on eBay where they still claimed it was by Bill Fisher - but no label to prove it!! So I'm not sure, it has a certain Celtic(ish) style to it, but is it by Bill or just similar style ? I certainly didn't put my money on it! But it is nice.

OK, here is a few of mine for starters
a dinner set I purchased several years ago.

A chicken if ever I saw one.

That's it for now. More with my thoughts on the bird design another time.

Dan - you tease, you know full well they did a 'king' range. I've just seen one in the pic's of your cabinets! But it's not the same mug that I didn't get (I store all the pic's I see on eBay). So now that's 2 mugs and 1 small slender vase I've seen in the king design.