Yep, those are very nice Dan.

I see that 'fish' dish as an Owl - fantastic, whatever it is.

Mousehole sugar bowl with white,gloss base 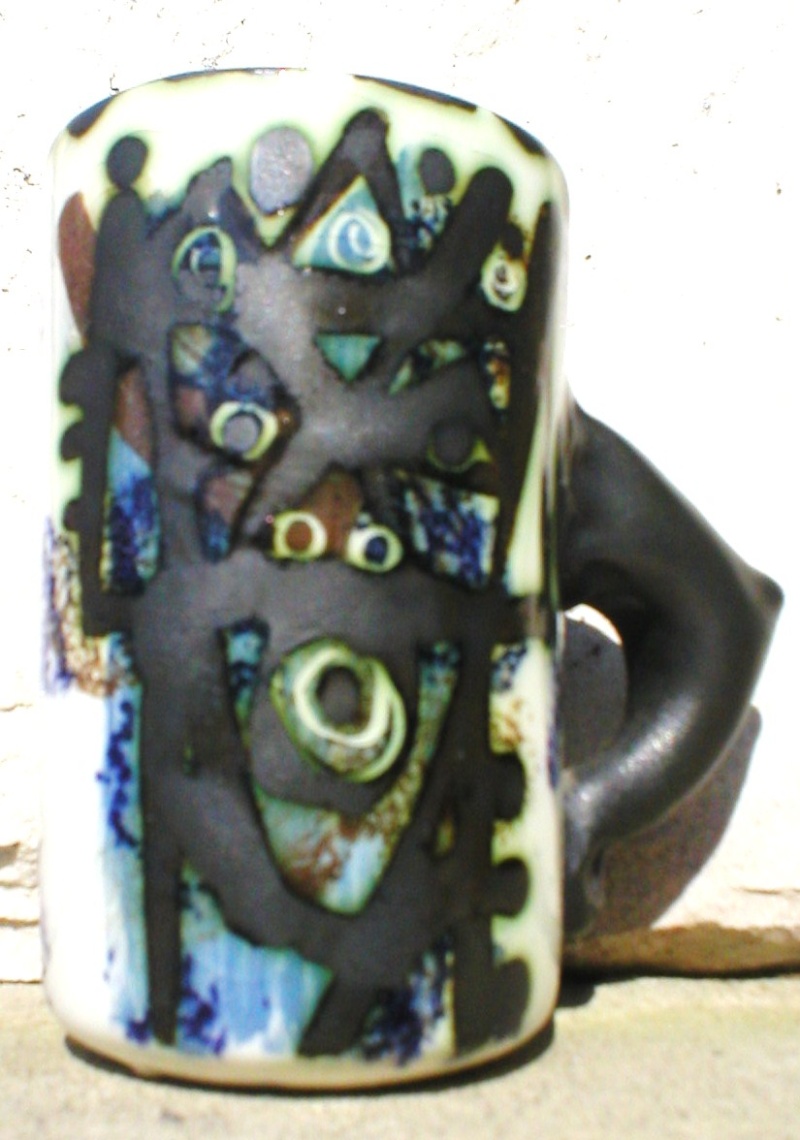 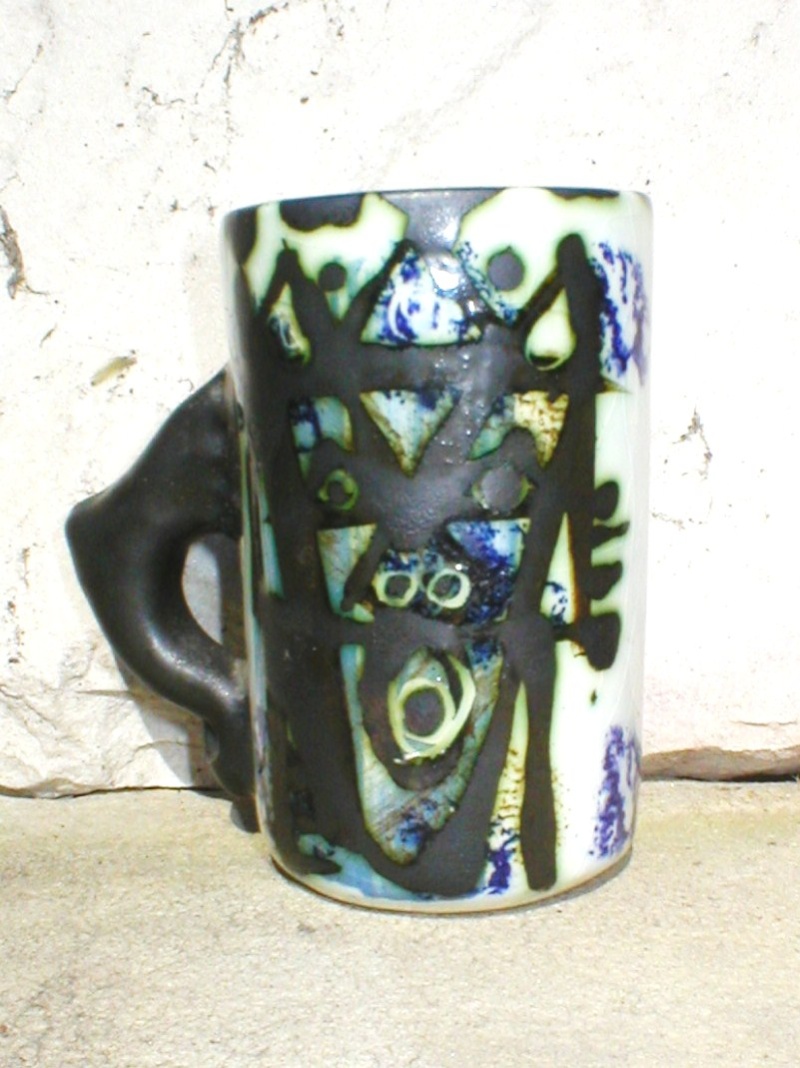 An unusal geometric design on this Mousehole mug, with original price?

8.5 inches at it's widest point

8 inches from nose to tail

same size as the cow

Yup ! fair enough , I just think from my own point of view you can only have so much of the same thing , while I can see the attraction for newlyn Celtic etc , it really is a bit one trick pony sort of stuff, I like it but it hasn't got anything special , Ok we know who did designs etc , but that doesn't ammount to much these days , I like to see progression in a potters work over the years , to get a one hit wonder and stick with it isn't that hard , mistakes should be made in art and eventually /hopefully the artists work evolves into a masterpiece or that ilk , same same same isn't for me , the works of Voulkos & Henderson are what appeals to meal , some of the acclaimed stuff at the moment is like wallpaper , rolls and rolls of the same old tired format , only my view Dan nothing personal 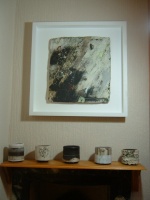 Ed, the early works from Mousehole are very variable in design. It is only after the move to Newlyn, that perhaps things stagnated a bit. But even then, the folk and Medallion ranges only carried on for so long, before they completely stopped and the art deco(ish) style was produced under the name Sunset Ceramics.

But very few Studio potteries don't have a 'style' which they keep to - which is how we can recognise them, even without a label. Leeper stuff is all the same, Tremar, Poole, Troika etc. I'd say it's actually harder to name one that didn't.

Whilst Bill himself continued to make some really outstanding sculpture and some very strange paintings.

If you had actually seen the range of stuff Bill did, you certainly wouldn't call him a 'one hit wonder'.

I think this is were the problem might lie , you see "studio potteries don't necessarilary produce true studio work , they have a format ( hence the one trick pony ) that they stuck to ,or do, as the case may be and that's fair enough - if it sells then great and I am well familiar with the potteries you mention and others besides , no matter what name they are called it's still the same business at the end of the day , I am not calling mr Fisher a one hit wonder , but the tired old designs that are flooding car boots /fairs etc in many guises , too much of a good thing imo , like the wiinblad design , great -yes but too much abounds , there has to come a point when you say come on enough is enough change the format the style anything , poole pottery is the worst for that , same shapes with very very similar designs over and over again , just like the west german stuff of the 70's no difference at all actually , I just don't recognise studio pottery as anything other than an individual creating a piece from start to finish From idea -to out of the kiln , that's for me true studio .

I don't understand that

big ed wrote: I just don't recognise studio pottery as anything other than an individual creating a piece from start to finish From idea -to out of the kiln , that's for me true studio .

That would fit very nicely with Bills terracotta sculptures, especially his earlier works. I think he had at least one assistant at some time later on, but I believe his early work was certainly all him. Just a shame almost none of it ever comes onto the market. That Bull and Cow Dan has now got are the only ones of them I've ever seen. The two lions and 1 bull I got a year ago are smaller and later and even though sold through Liberty, are again the only ones I've ever seen. Even those larger horse/unicorn figures and few and far between - I've seen perhaps half a dozen. Certainly not falling over the stuff.

dantheman wrote:one person can only make decorate and fire a limited number of pots each week

And if they must all be different and not fall into the same old same format, they wouldn't be making many.

The thing is most of the Newlyn wares were not really studio pottery, so you can't really compare them to high end individual potters in my opinion.

Most of it will have been made fairy quickly by a small team in order to meet with demand. (I expect demand for the more common pattens was very high)

As with a lot of these types of potteries, I believe their earlier work was much better in general, due to more variety (before they focused mainly on what was selling) and spending more time on each piece. 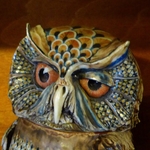 spot on Potty, the 3 early pieces that I posted yesterday would have taken Bill many hours of careful work but Maggie was and is a businesswoman first and foremost.
_________________
Due to travel restrictions the US was obliged to hold the coup at home this year

"Sea Horse - Look closely and you will see it's hasn't had final glaze/firing. It is course not glaze smooth and the colours have not been 'brought out' by the firing. I'm not sure why, but another 'un-glazed' to follow."

"Has anyone else got any of these 'un-glazed' ones ??"


May we see the backs of your unglazed pots please Celtic Fan?
_________________
Due to travel restrictions the US was obliged to hold the coup at home this year

Not sure where the fish is, but this is the seahorse.
When I was chatting with Kevin Walker about his pots, it seems these may have been finished after the Biscuit firing. Kevin was going to do some like that and I liked the colours before being glazed and 'finished'.

I love the detail in this early Bill Fisher horse, better than his later work in my opinion