Asking on behalf of a friend who volunteers at a hospice charity. They've had this donated and are wondering if it's just cheap junk or something they can charge more for. It stands about 10 inches tall. I've looked on-line for anything similar but not really found anything. It's stamped 622 - presumably a shape number. Any help appreciated. 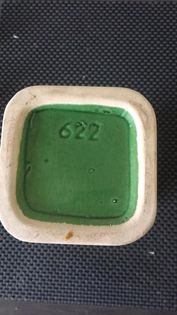 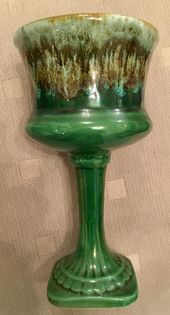 Not a style I recognise but I'm not an expert in production pottery. If it's not IDed relatively quickly I think the chances are it's probably not worth very much, but someone will probably buy it for a couple of pounds.
_________________
Carrot cake is just fake cake

My thoughts are that it is one of a set of six goblets that were fashionable in the 1970s. Some things from the period are of interest these days but the colours just kill it from my point of view.
_________________
Now you should know by now that Potty and I need to see your bottom - we're funny that way!

Didn't Fosters / Kernewek do a very similar glaze to that (as well as the standard brown honeycomb)?

I often wonder about what UK potters and potteries did 1939-45. They could get clay, but perhaps had to repurpose older moulds and use existing glazes that they had in stock (this idea has come from seeing 1940s clothes that relied on earlier trimmings for decoration). I rather take the view that if a style is puzzling it usually belongs to the 1920s, which is often a transition between older decorated styles and forward-facing art deco ideas, though I am not certain enough about pottery to know whether this is true for that. I know there was a big craft revival in the 1920s and this was expressed in pottery that celebrated hand-made qualities. This piece does not fit into that. It has that typical jade green and hardly a straight line on it (apart from the sides of the base) of the 1930s, but no quadrant circles. So: not 1920s, not high 1930s, not 1950s because of the Victorianish appearance of the stem moulding. My guess would be a 1940s hybrid combined from earlier moulds and glazes, but - this is where I came in - I do not know what happened to pottery in the 1940s. I also don't know whether people were able to obtain decorative objects at that time. But I could see this standing on a 1940s mantlepiece... which does not give it value, of course. What about those numbers on the bottom -very plain - utility style?

The numbers are most likely a shape number.

From 1939 until 1953 most of industrially produced pottery was undecorated white wares. By law, decorated/glazes ware could only be made for export. Some did enter the British market, if it was leftover from an export contract.

So I would count it out from being the period you suggest.

The look of the exposed clay on the foot appears to be the inexpensive type used in the 1970s to me that, together with the colour palette, was why I came to he conclusion that I did.
_________________
Now you should know by now that Potty and I need to see your bottom - we're funny that way!

Some British pottery companies set up in the colonies, like Australia, and could them import decorative wares to get round Government restrictions. Sometimes you even see French and Czech pots with British stamps.
There was little innovation during the late 30s-50s, and the same moulds were reused making dating difficult.

The rather classical design round the base, and the "majolica" green glaze, would
suggest pre-war continental, maybe French/German.
The height and shape would suggest a celery vase.

Thank you experts. Bang goes another good idea, but now I know more.

NaomiM wrote:In the glass world, vases were renamed "celery vases", etc, to get around the Government's restrictions.

Yes, some had the word "celery" etched on.
Pottery also, had the same thing, utilitarian wares had less, or no, purchase tax, compared to decorative wares.

Ah, that was it. Read a book about the tariff wars between Europe and the US from the late 19thC into the Depression, and companies developed ways of getting round the decorative tax, from renaming forms, to producing importing pots from the colonies and stamping England on them.
_________________
Carrot cake is just fake cake

denbydump wrote:
The height and shape would suggest a celery vase.

I see what you mean...... the stem is hollow and you have one stick of celery in there.

Although the pot is of no interest, I think the actual discussion has brought up some interesting points and personally I was delighted to be able to write "cheap junk" without causing offence.

One man's junk is another man's treasure. Just because it's not the sort of thing we would buy it doesn't make it junk (although I would say differently if it was one of the student pots I see in some of our local charity shops).
_________________
Carrot cake is just fake cake