Thank you Naomi, I guessed 70s 80s but I'm no expert.
I've always liked Owls so I bought it, it is very heavy for its size. Alan.

Very large mug. Unmarked and unusual decoration, but both the dealer and I thought it was Briglin. But maybe someone has an alternative suggestion.

Yes, it looks like Briglin to me. The impressed mark seems to have been forgotten on a higher percentage of pieces that originate from Briglin than elsewhere from my observations.

One question - is it stoneware rather than the more usual earthenware? If so, then I believe that it is most likely to have been made during the 1980s.
_________________
Now you should know by now that Potty and I need to see your bottom - we're funny that way!

One question - is it stoneware rather than the more usual earthenware? If so, then I believe that it is most likely to have been made during the 1980s.

Um, good question. Not sure I know the answer. Might be stoneware.
You're going to laugh at this, but if there are old paint splashes on a piece of pottery then I estimate it's at least a generation old, and this has small paint splashes, so 1980s would fit.

It might be just the photographs but the one you have put the link to is a typical dark red earthenware that Briglin used during much of their production life. Your mug seems to be a lightish brown in colour, which looks to be similar to the fine stoneware that they used late on.

studio-pots wrote:It might be just the photographs but the one you have put the link to is a typical dark red earthenware that Briglin used during much of their production life. Your mug seems to be a lightish brown in colour, which looks to be similar to the fine stoneware that they used late on.

Not sure that it is of any great importance either way though.

On closer inspection I think it is the typical dark red/brown earthenware. There is a slight ochre yellow patch on the base which has got mixed with the clay on foot rim, which might account for it looking a little lighter than normal.
_________________
Carrot cake is just fake cake

Naomi - Very nice mug - It's in the right place IMO. Strangely enough I also have noticed the paint splashes on items. 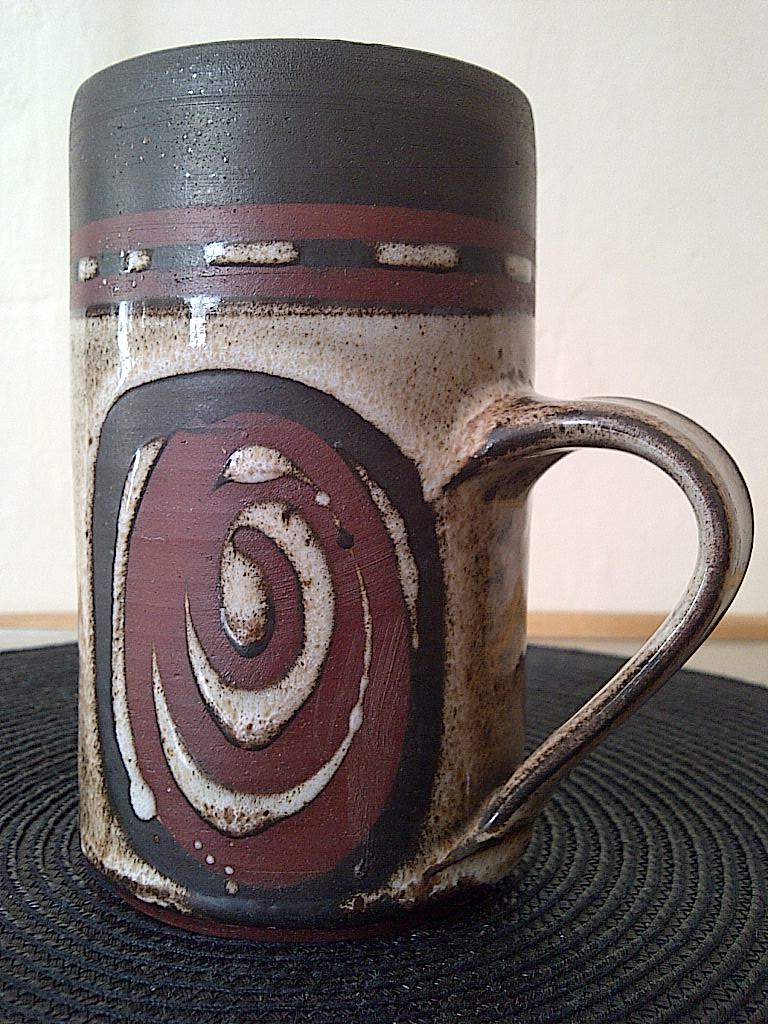 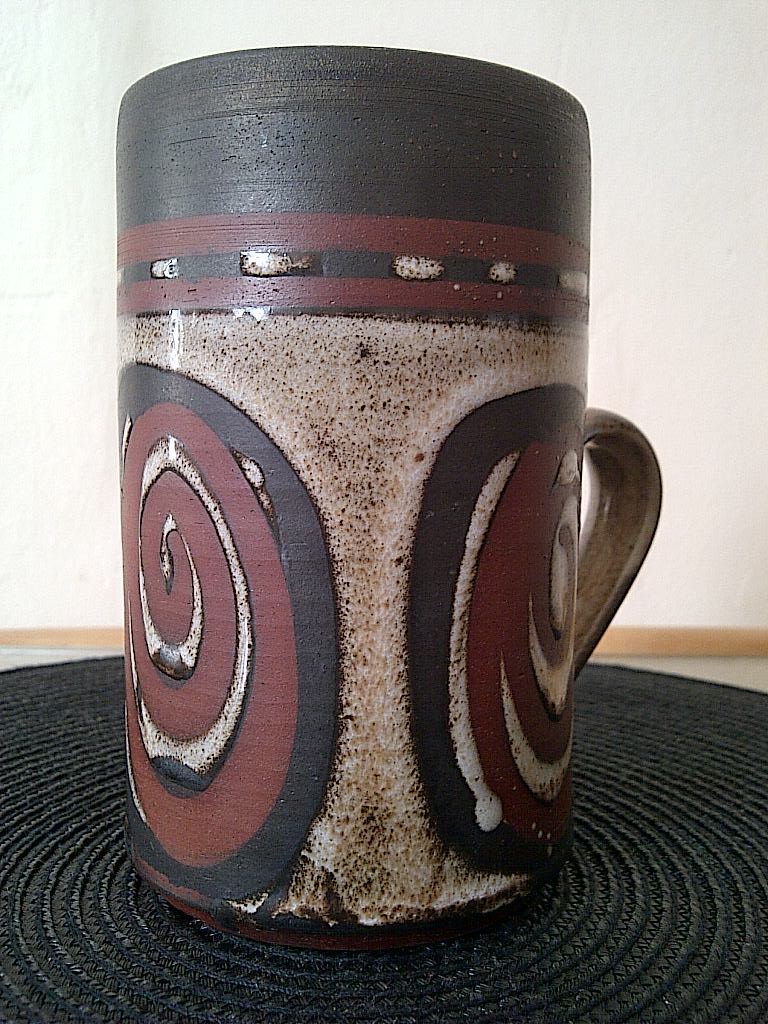 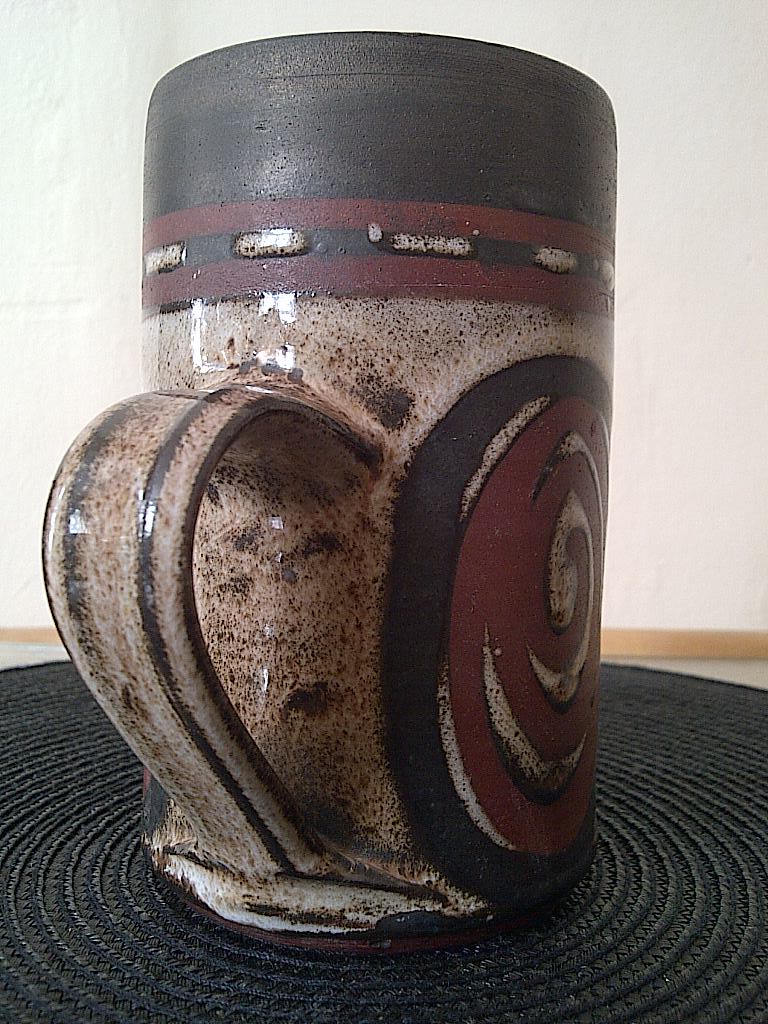 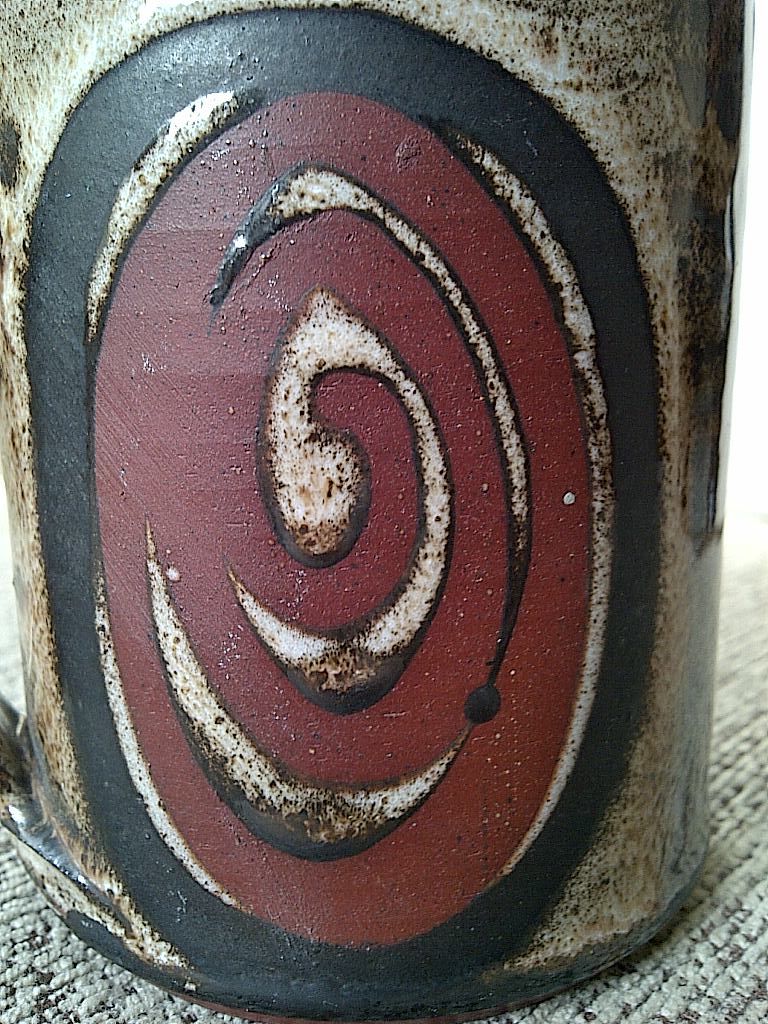 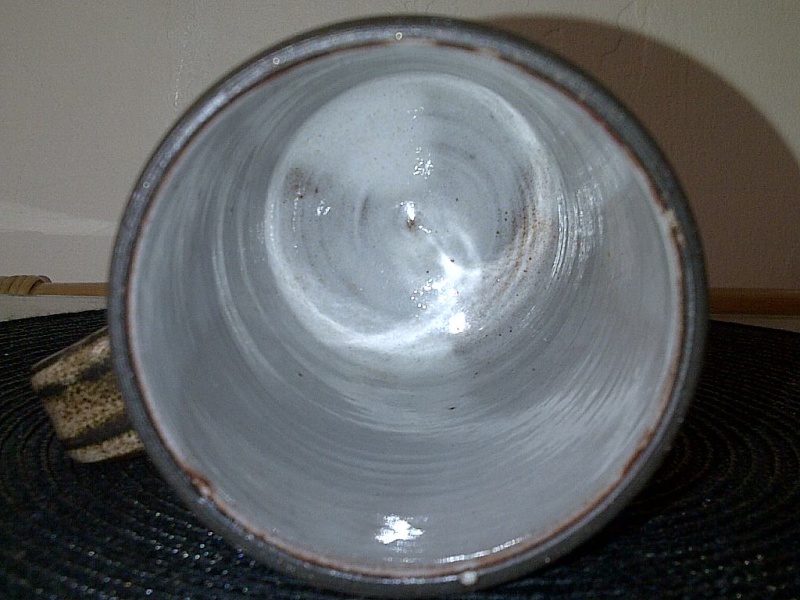 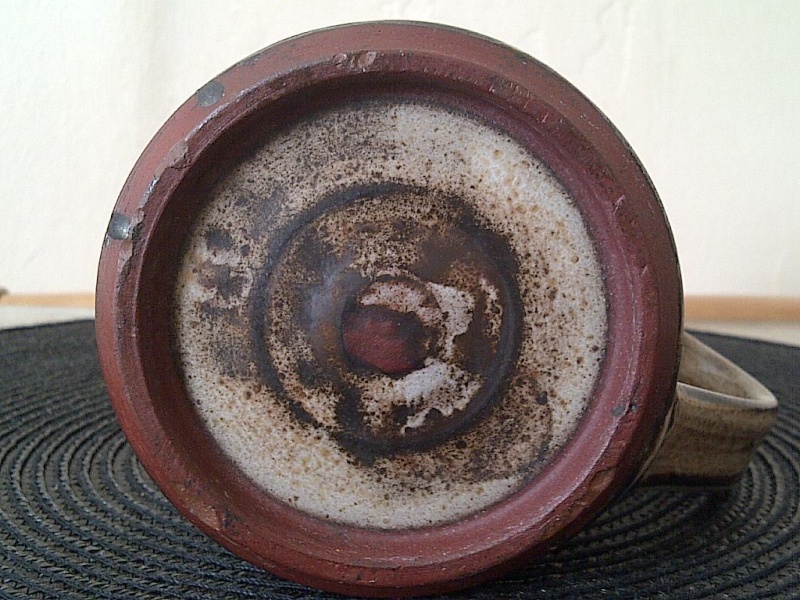 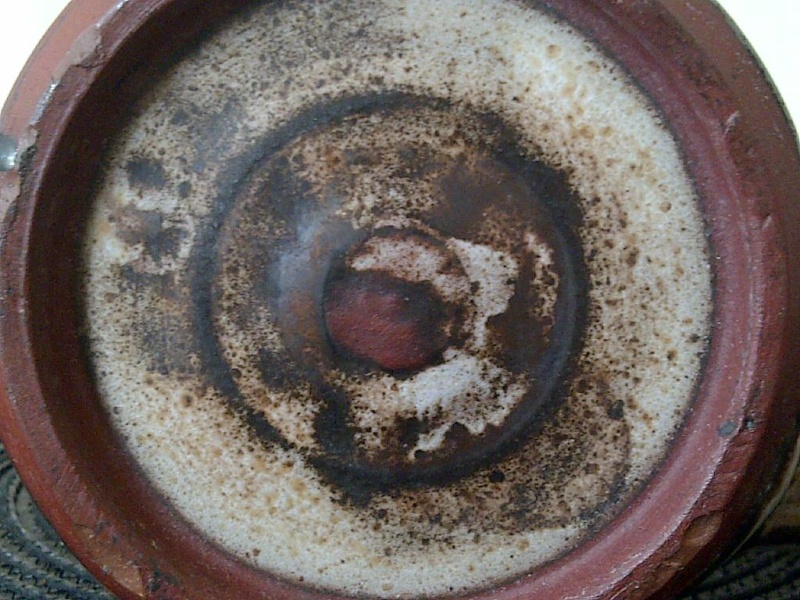 LOL Dan! - I've been chatting via email with one of the main (very kind) potters at Briglin and I finally have some excellent physical pointers to date pieces from the 50's, 60's and 70's. This will be a real boost to anyone interested in collecting this fine pottery. I'll post with examples of each epoch perhaps with the original emails. It's obvious once you know

TY Dan. The site has done well for the last few years but looks long in the tooth now. I'm now on facey-booky and updates are going there whilst I get my tiny little brain around Wordpress.org It's the only way forward (I think???) if you need to publish 1000+ photos and control / own them yourself and do it cheaply. I have shed loads of items to add. 40 or 50+ I've lost count. I sit here at my desk and they are piled up all round me!

The whole point of the website was to help other collectors and publish the information before it was lost. People need something to compare against. I could 'hoard' this information but I prefer to help - It would be great if more could publish their collections as I just love seeing Briglin, especially en masse.

Some comments everyone may be interest in are these; " which may be useful for dating when I first started in 1965 we used two stamps one saying BRIGLIN and the other saying England. The England stamp was drop(sic) in the late 1960s to save time.", "The pots made at Briglin involved more than one person in the making i.e. someone throwing the pot another turning the foot ring and some one else decorating and glazing which may be the reason that pots were not signed by an individually","The tall vase in the photo my(sic) not be as early, the one thing that dates it my opinion is there is no foot ring this is some thing that started around the mid 70s".

At some point I'll publish the emails in full, including photos of groups of Briglin from the four or five different epochs and a fuller explanation.

When you are young you seem to have plenty of spare time and nothing to do, but now I've so much to do, so many interests and so little time!

That would be great Alex! I have spent many a happy hour exploring the briglin website - a great resource. I have quite a collection of Briglin which I use for tea and coffee parties. I understood that the rough earthenware with inclusions was used until 1972 when Brigitta returned to the pottery after a break and decided to improve the clay to make it easier to throw. After that date it is much smoother and harder. Is this true? This lovely coffee set has the earlier type of clay I think.

I really like this mug - has the coarser clay. Sadly has a hairline so can't use it.

And finally, a pair of plates in the smooth clay, but stamped England! Help

Skipposal, this is how I think of the periods:

I have sketched out a long chapter on each of the 10 year (approx) periods and some bullet points for the main things to look for in each. I'm still writing it. I must stress that this is my division but it's based on the changes in style, stamps, decoration, clay and location. I'm still finding things out. Why, oh why there wasn't something like this in the AA book I don't know. (Gggggrrrrrrrrr!!!). I suppose the book was mainly the history of the pottery and a memorial for Brigitte. The AA Briglin book was her story - her life and that seems fair. Collectors have a different perspective, they want raw facts, lists dates times. Collectors really need a book written by another collector. I'm trying to help everyone with the website which will be back in an updated form sometime.

Yes see AA.p.61 approx 1973? the grog was removed to make decoration easier, but nothing is black and white and it would not surprise me if that date shifted a bit. The first tea set is nice - complete sets are always good and it the groggy blueish one. I like it a lot. So, is it a 70's set using old type clay? or a 60's England set missing a mark? I would go in between approxc 1970? The next one is later with the typical sharp base and the black and white vases were made by various people over many years, not seen any earlier than Briglin England so they are 60's onward IMO. They are popular and there are always lots of bids on ebay as you probably know. The two plates, yes odd, sharp base but England, 75?

Thanks for the photos. PM me if you need any help I

Must go to bed or I'll end up like Potty. Found this 1957 ink stamped tall vase the other day. Looks like you could use it in the kitchen to grate cheese - it has so much texture!

Thank you so much for all that - brilliant! Have you thought of using a site like lulu.com to publish your research? I've used it to print my catalogues, very easy and no cost involved.

Someone must know what this is. The base shape makes me think Briglin, but it's a lighter brown than their usual dark brown clay. No impressed Briglin mark. Might be a tiny mark in the centre - G maybe - but I think that's just an artefact of manufacture.

The base is very like my mug, with the turned middle and white glaze.

The nipple on the base might point to Briglin. Other pots have traces of a 'button' of clay in the middle

OK 22, will post further photos asap. Note the bottom on your example Naomi - the thing that gave me doubts on mine was that the base did not have the more pronounced rim that all the Briglin items I have handled seemed to have.

22, here are some further photos - what do you think?