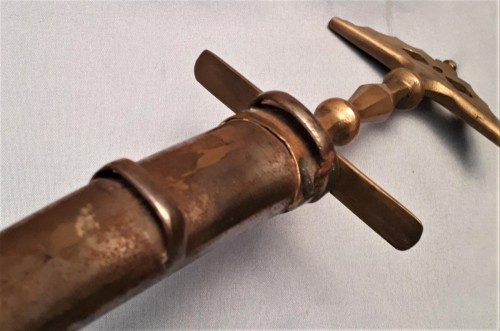 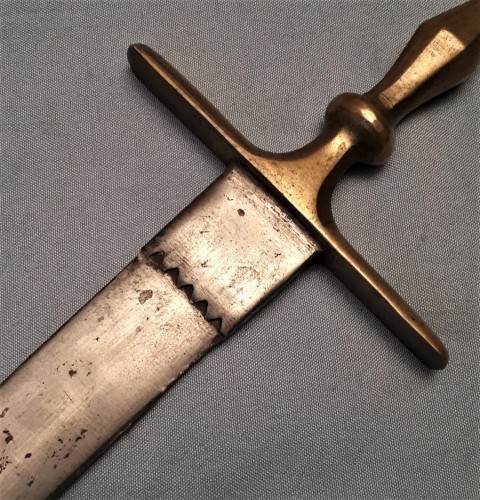 It looks more decorative than a serious weapon, and I'm not sure if the blade is original. I would have expected the blade to curve up and taper more at the end, the same shape as the scabbard. It's possible that it is original but suffered damage to the tip and was re-ground to its current shape.
Another thing that points towards a decorative piece is the handgrip. The space for the hand looks slightly less than the 3 5/8" width of the pommel which would be a squeeze for an average-sized hand to hold comfortably.
My best guess would be an Egyptian or Tunisian tourist piece.

thanx grumpy......! I noticed the grip spacing as well! but I thought mayb a push dagger of some sort!.......what do you think?

If by push dagger you mean a stabbing rather than slicing knife, it's unlikely. Stabbing knives tend to have symmetrical blades tapering to a central point. The blade will be either narrow with a circular or almost square cross-section (think stiletto knife) or broad and flat.
The broad blades will be sharpened on both edges and have a groove running down the centre to create a channel for blood to run down and to make it easier to withdraw the blade. Without getting too gory, without the groove the flesh will cling to the blade, effectively creating a vacuum -like suction, so the groove provides a small gap to let blood run out freely which removes the worst of the grip. For a similar reason, a soldier using a bayonet will often fire a round as he stabs because the bullet increases the size of the hole and makes it easier to pull the bayonet out.
A curved blade will only have the outer edge sharpened because they were traditionally used for slicing and slashing rather than for stabbing.
If you do an image search for 'curved dagger' you'll see what I meant about yours possibly being ground down at the end; compared to an unaltered knife you can see how yours would have continued beyond the point where the top of your blade just begins to curve upwards.

thanx again grumpy.......! good to know! hey, do they allow jewelry on this forum?